Torchlight is an ARPG with a hack and slash gameplay. With loot falling everywhere as you explore deeper and deep into the depths of the game. I ended playing the first one in the series and now I’ll be keeping my eye open to pick up the rest of them at some point. Nowadays it can be picked up cheaply and even goes on sale quite often. Making it a great and cheap game to play for those on a budget.

Deeper And Deeper You Go 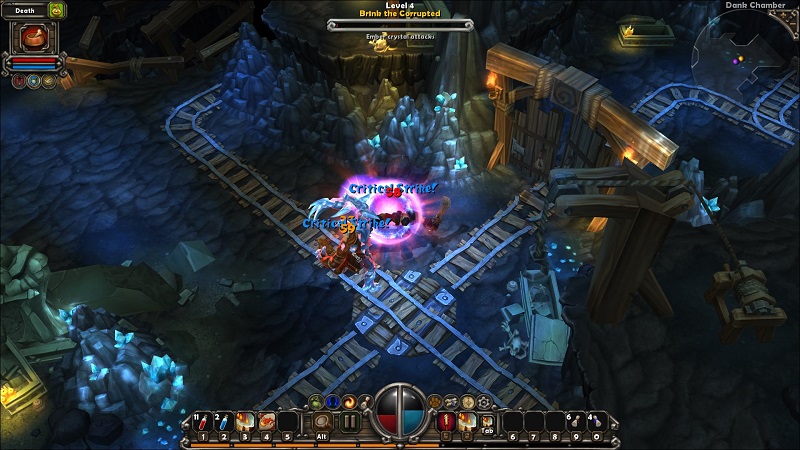 It was like descending down into the depths of an abyss. You just kept going deeper and deeper wondering where it ended. Once in a while, you would run into boss fights and other times you would find hidden areas gleaning in gold.

The game is quite heavy on hack and slash gameplay. I ended up picking the destroyer class out of the three options you have. I rather enjoy melee in these kinds of games and I wanted to be up close and personal as I dived forward with my dual axes drawn waiting for my next target. Each class itself has three different branches of skills to pick from. Being the noob I was I focused mainly on Breaker which worked out quite well dual-wielding mainly axes but sometimes swords and other things were used if I found a superior upgrade.

One thing that made this game stand out that I ended up skipping over, for the most part, was the spell system. During my playthrough I kept looting, finding on venders, and acquiring via other means different spells. These could be equipped into spell slots and I just never found them that useful for my pet or myself.

At the start of the game, you also get to select a pet. You can equip them with gear, spells, and have them attack or defend. For the most part, I used mine as a place to store extra loot. They can also run away for a short while if they get to low on health. Overall they can provide some damage and cover but I had other uses for me.

The game has a cool feature of allowing you to send your pet off to town while you are still clearing the dungeon. While money was not always the best route to go since you could transmute gear into making something better. I more times than not just wanted to empty out his bags so I could keep looting. I didn’t mind the extra money too much. I know the hardcore players of Torchlight out there would cringe at just selling off items like that. The funniest part had to be discovering hidden little areas. More times than not they were quite easy to find on the map. You could pull a lever to open a hidden door and have a side area that was filled with loot. Once in a while, they seemed to be better hidden but they were still easy to spot.

Every so many floor you could come across a cutscene where the story would unroll a little bit at a time. You would then encounter a boss fight of sorts. Since this is a hack and slash game the fights whereas to be expected. You would pop some health potions and burn down the target. Usually, you would get a unique item drop.

A game like this, of course, is all about the loot for me. Getting those unique drops was quite thrilling.. For a while, I was getting a lot of range or even magic focused items. Even when they were not ideal they tended to pose a huge amour upgrade and a large amount of stats that it was worth wearing if you meet the requirements.

The game does have a couple of different difficulty settings to add in the challenge and replayable. I myself went the normal route and did not elect to be on hardcore. I felt it was quite a fair assessment of the challenges that I faced. I could really see needing to farm gear, levels, and need to min/max other elements of gear and the skill tree if I was playing it on a harder setting. Torchlight is not like other ARPG/RPG I’ve played a lot of in the past. It focuses around a main city where you do the bulk of your selling, storing, picking up questing and upgrading gear. Since this game is not about wide-open zones like Diablo is this single town mechanic works really well. From there you depart on your adventure.

One thing I noticed right off the bat about this game is how well put together the town of Torchlight is. It is quite a decent size with a few areas to explore. It’s not massive to get lost in kind of place but you also don’t feel cramped. They found a decent balance of space and utility.

The game does feature both a personal storage stash and a shared one for any alts you end up making. I myself found several items that if I was going keep playing on different characters I already have some amazing items I found for them. I really enjoy it in these single-player games when you have a shared stash option. It makes playing other character fun when you have already done the bulk of farming and just get to enjoy being overpowered in nice gear. 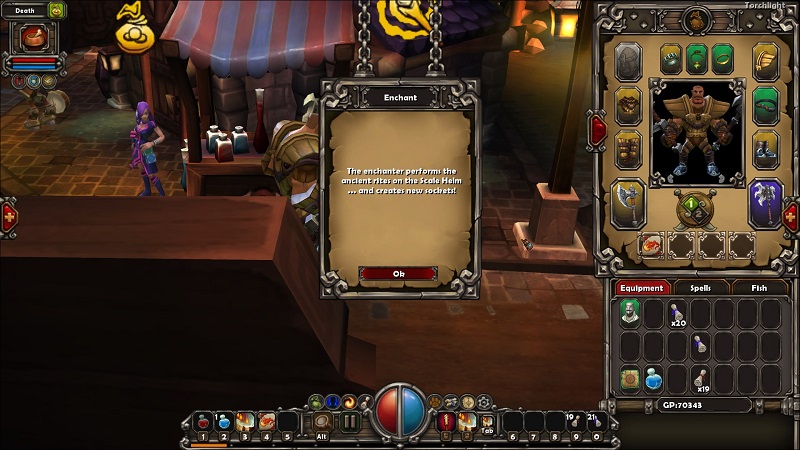 One interesting mechanic this game has Is how they go about allowing players to enchant gear. While in a lot of other games you either succeed on the enchant or fail. Failure here could be nothing or you losing all stats on that item in the first place. The more and more you attempt to gain extra stats, a socket or other benefits the more risk you take of losing it all.

I personally have always enjoyed in-game systems where you need to ask yourself as a player is it worth trying to make something better or use it now? One such system in Torchlight is the gem socketing. While you could remove a gem later you can’t both keep the gear or the gem without losing the other.

The biggest downside at least in my eyes for sockets is the amount of stash space they end up taking up. It’s hard to judger right away if your future needs on gear and weapons will be damage, resistance, life steal, and other fun things. So I’ve turned into a gem hoarder myself. While I could upgrade these to make some room I tend to hold off on that till I need something.

This part of the game really highlighted you don’t need to overcomplicate things. I wish more modern-day games could learn from this more classic model of just giving players access early on to do most of everything. It’s the items the player has to go out and acquire that add the challenge. No need to make it externally daunting task out of it. 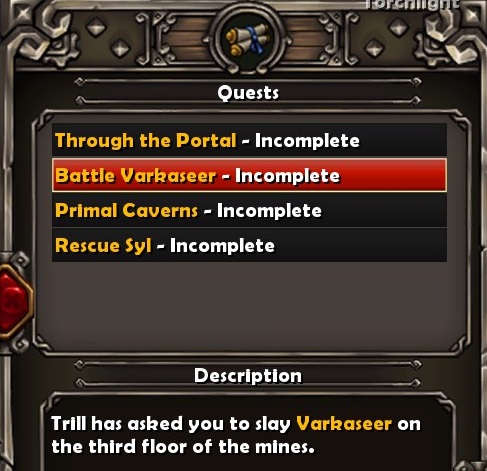 One area I have felt some ARPG struggle with is questing. While the game does have some. I, for the most part, skipped right over it. Unless it was part of the natural progression of the game where you could not miss it as the main quest.

Quite early on I had several quests and after fishing less than a handful I noticed I still had yet to finish a bunch of them I had collected. I even tried to go back in early zones looking around for what the quest was asking for. Even when I did find the question objective I somehow missed. The reward was mostly lackluster.

There is however the main story to the game and questing that you naturally have to do to progress forward. More times than not, I really did not care too much for the loot or the experience from doing them. The real rewards I felt where in the slaying of whatever boss I needed to clear to progress even deeper into Torchlight. There are also several side quests you can run in town. Where they were a lot more straight forward since you enter a separate portal for them. Run through the couple levels of dungeons until you completed the task and then got rewarded. I usually found these a lot more challenging than just progressing deeper into the game.

Overall it felt average for ARPG as far as questing goes. Perhaps I somehow really missed out on something big. Granted most ARPG I play I don’t do it for the questing. I just want to farm phat loot and clear floors of monsters! 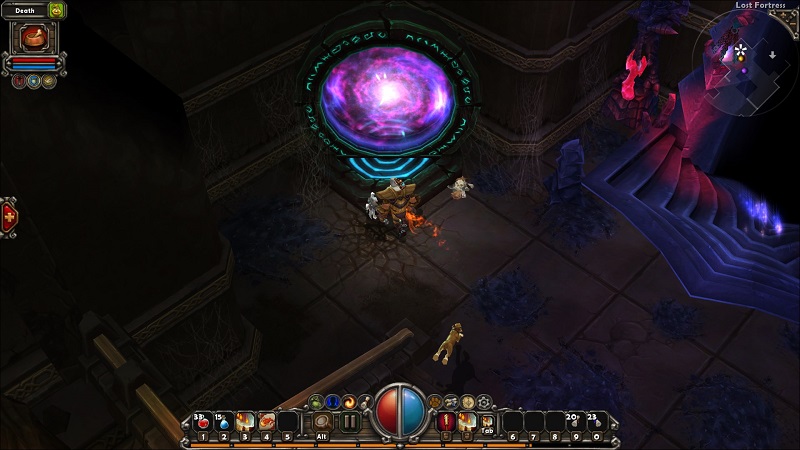 I had a blast and it certainly has intrigued me enough to want to check out Torchlight II and III in the future. It is a bit of an older game so it was great seeing how stuff that was done back in 2009 is still seen as relevant in today’s games. While other things not so much and I wish they were. As this was a great single-player game which these days feel like it’s hard to find.

Screenshots were taken and content was written by @Enjar about the game Torchlight. If you are thinking about getting this game and are looking to support me further consider using my Epic Games creator code: enjargames at checkout or using this referral link to be sent to the store's pages.