I was digging through some old boxes deciding what was worth hanging onto and what was going to be tossed into the trash when I found it. A CD case with a single CD in it that contained the red Interplay's Family Favorites disk. While I had the other colors they are long gone. I however had a reason for holding onto this relic and will be keeping it.

The red disk itself had a few games on it including one I played the daylights out of during my childhood called Conquest of the New World. The issue was I no longer had a CD player for my computer and a quick search confirmed that you would have a hard time getting it to work on a modern computer.

While I was not planning to buy anything during the Steam Winter sale I was filled with delight when I noticed not only was it selling but at a discount of $6.99. My biggest concern was would it work in any way or would I be hitting the refund button? After a rather quick install and reading the mostly dead forms that people started having some issues with ram. I loaded up the game. I did not pay much attention to the first couple of boots to notice how the game was running.

Something we often forget as gamers is just how much of our own culture is lost over time. There are so many games out there that once they hit the dust bin of old age will never be playable again unless you have the original hardware it was created to run on. A lot of these things just will not run on a modern-day set up with some help or in the same cases a lot.

Not to mention the many legal stances being taken agest gamers trying to find new ways to get old games working. Even games just a few years ago will have massive issues getting to work with their requirements of always-on, anti-cheat, and other insane DRM keep them possibly dead for a long time.

Thankfully this story does not end this game failing to load. The game boots up in an emulate program called DOSBox. This strategy game is so old it's back from the DOS days.

It is not like your modern-day strategy games where you have mile-long skills trees, an insane amount of things to discover on the map, and need to read a thesis paper on theory to not suck at playing it. No, it’s simple yet still challenging in its way. The game includes a few different scenarios you can play with many of them introducing you to playing different civilizations in the game from being one of a few European counties to what they called high natives.

While there is a multiplayer option and to my shock, people are still to this very day still trying to find people to play against them. As a kid, I never played multiplayer. I don’t even think when I had this game at the time I even had dial-up. If I did I never cared about the “internet” at that point in my life so I knew I only ever played in single player. You start with a ship, a couple of explores, and some leaders for engaging in combat. In your first couple of turns, you are trying to find somewhere to set up a town. One of the best things in the scenarios that are lacking from more modern titles is you don’t start right away with a settler to make a town. You get a couple of terns and sometimes are required to make some discoveries first before another ship spawns in with your settler for making a town. As you explore you will find rivers and mountains that can be named. Along with resources that give a bonus if you are within range.

You might even find the local area has some hostile natives that will cause you trouble till you can take them out on occasions. You could also luck out and they could be friendly and a trading partner; although, the AI can be rather greedy over other trading options with your home counties or the other AI’s on the board.

For the most part, I was always on the hunt for a secondary location to set up another town. While you had a couple of moves to try and find a decent spot. The tier one explorer has quite a limited amount of travel distance per tern. Usually, the game starts you rather close to a decent starting area.

Granted I’ve had some playthroughs where I would start over again at around turn 10. Many of my starting areas had some evaluation eating up space I could place things. Maybe the surrounding area was hard to explore with hostile natives. I had quite a few reasons. After several turns, I would have my starting town up and running. It’s not a very complex game with there being 11 different buildings in total you can build in a town. While you can upgrade their tier level depending on your town's levels. It is rather simple. 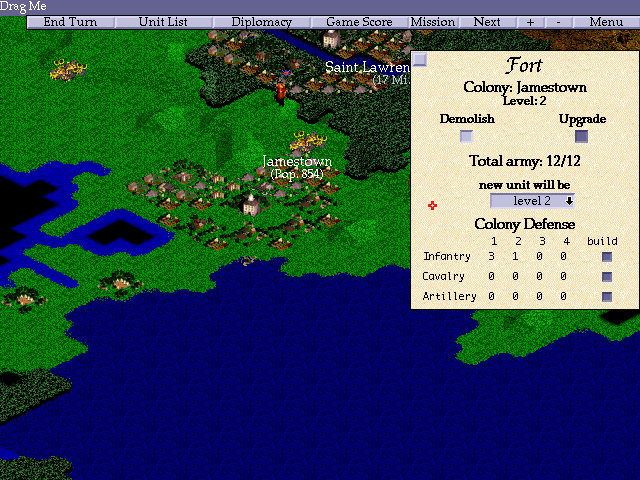 From one of the buildings called a Fort I can train infantry, cavalry, and artillery. That is it. Nothing fancy. Sure I can level up the building and make higher tier units they however remain the same type of unit. Combat itself is also rather simple and I miss it to a point. You get a simple board layout and can move your characters around in a limited fashion. You will often miss attacks and it can take a couple of hits just to kill anything.

This also is not one of those games where you can just go in with a couple of units against a massive horde and expect to come out as the winner. I got crushed in the above combat while playing as High Natives and my leader in that attack did not survive to fight another day.

I can recall as a child after a few battles I would start just selecting the auto-battle feature every turn. There gets a point where you are ending up in endless battles from the AI or as you clear out the board. As an adult, I’ll admit I enjoy hitting that auto button as well. I loved exploring and town building back in the day and I still do today.

After a while, you end up having quite a few towns set up that things start to snowball in your favor or not. Unlike your starting towns where you wanted a bit of everything. Later on, those towns end up feeding into towns that focus on single productions around a bonus item for the highest yield.

I would also start to send settlers around the map creating beachhead towns to launch attacks from. It takes quite a few turns to get units further and further out. Outside of your town they are not healing so having a mostly safe place to fall back to that is being fed lots of resources is always helpful. Every turn you would get a progress update in the form of a newspaper. It would give you the total score, who discovered what, and so on. There would also be little news stories that I’ll admit even back then I never read.

In some of my playthroughs, I got to relive the struggles of having armies so large they did not fit into a single boat. I would then have to remove a few from their leader and place them on several other boats. One by one tell each boat to head out to a location. Then rejoin all the units back up to their leader. The fun of older games.

There also is a point where I would just select an auto on each town and let it build itself up. If you wanted to you could micromanage a lot in this game like any other strategy game. I’m however thankful even back then you could select auto-explore on units and not spend half an hour per tern. While it’s a shame I had to rebuy an older game that I had lost and forgotten about. It was also nice I could relieve some childhood memories on the cheap. There have been so many great games over the years that I’ve played that I can’t recall the name of and I’m still on the hunt to find. At least my faint memories of a game I loved being on a red disk have been marked off my list of unknowns.

Screenshots were taken and content was written by @Enjar. Screenshots are from Conquest of the New World.