BROcity is a browser game. Players can send their character to buy items to increase stats points, go to work to earn in-game money, and even fight other players among many other things. While users can buy in-game cash and gold with Hive the game is f2p with most things accessible for those looking to just play for free or on a budget.

With this being a browser-based game it does include a health and energy system that depletes when certain actions are taken. Unlike the more standard game that uses an energy or health system, there are quite reasonable ways to restore these meteors when you are getting low.

Health can be restored by sending your character to the gym. As with many activates within BROcity you do need to wait in real-time for your character to perform the selected workout. This could be as simple as stretching which costs $150 and takes 15 minutes for the gain of. There are also full workouts that take 2 hours cost $650 and restore 80 health 15.

The gym also the player to gain main stats such as agility, endurance, and even power per workout. This seems to be one of the better ways to gain stats without having to invest the much harder resource to acquire called gold. The drawback is you can only perform one activity at a time and there is no queue up or repeat option. So you will have to micromanage it throughout the day if you want your character to remain most active in the gym.

As far as energy goes it seems to restore rather quickly just on its own. By the time you complete an 8-hour work shift for instance that costs 60 energy, you will more than be full again. This is rather nice as you are not trying to chase leveling up or waiting an entire day to refill an energy bar.

I also found for whatever reason if you are getting low on energy from other actives you can buy drinks in the shop. Some of the drinks do cost gold which is harder to acquire resource and not worth spending. The bulk of them just cost money. Using 60 energy for instance in an eight-hour job that yields 6,500 would cost you $3k in Bro java to refill. Expect you don’t even need to as by the time that job was over you would be at full energy anyways.

It does feel like the game overall in the above examples is being extremely kind to the player. Just performing daily actives as mentioned is easy to recover from and allow the player to advance without having to put too much thought into working out the cost of acting. A big part of BROcity is having that cash to blow on expensive goods, housing, and fast cars. Overall collecting money requires the player online at different time intervals otherwise it just sits waiting around uncollected. For the stage of the game I’m up to, my two biggest sources of income have been from owning rental properties and sending my guy off to work.

Those who can get online can make the most of earning money while those who can only play daily will take much longer to grow. As you need to be around to start the collecting process and timer all over again once an income source completes.

Income property can cost a fair amount of money and a harder to acquire resources called gold. The biggest limiting factor however can be the required level of the player to make a building purchase. It did not take me long before I owned my first couple of properties after that leveling slowed down and became my bottleneck.

As we can see in the screenshot above I have purchased a few properties. They each have their real-life timer before I’m allowed to collect income they have generated. It can be as short as 15 minutes up to every 24 hours for the end game ones that I do not own. 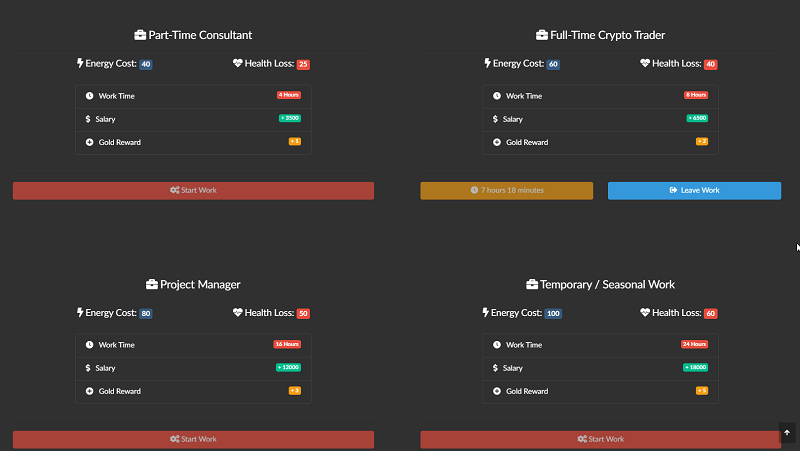 Another major way to earn in-game money is by sending your character on a job. Oddly enough they do not have any requirements so you can pick whatever is best studied for when you can be next active. I doubt my character would be a competent project manager but if I needed to be away from the game for 16 hours that seems to be the best activity to leave him on.

Earning cash in-game is more of a waiting game than anything else. You just need to remember to keep your charter active and top off his health when needed. There is the other type of in-game currency called gold and that seems to be more elusive at least from what I’ve played. 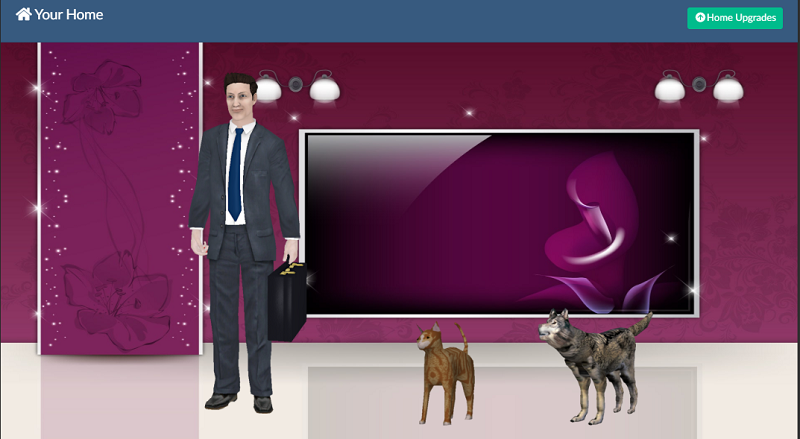 When you are flush with cash it’s time to start blowing fat stacks to acquire stats, influence, and things to show off. After all, you want a giant house decked out with the closest overflowing with clothing and a place to park your future yacht.

The player can purchase a home that provides several upgrades to fit the player’s lifestyle. Everything from a simple apartment room where you is not even allowed to have a pet where other options let you have a couple. You can also buy a garage for your cars, a hanger for helicopters, and even a quay for that yacht life. 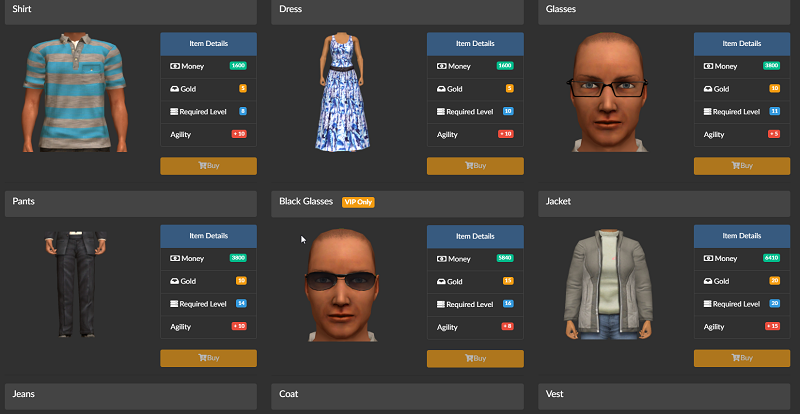 Another major place to spend a lot of money is going on shopping sprees. While it’s just called “shop” in-game it feels more like a mall. In there you can buy clothing, potions, electronic devices, foods, weapons, and equipment. These items often only have a level requirement. The blouse I picked up for the 8 agility I swear I’m just holding it for some future girlfriend. They don’t seem to judge what so ever in the store.

There are other places to spend money in-game these were just a couple I wanted to highlight. They seem to be the biggest places and can offer a lot in return for the player. If I had enough gold I’m sure I’d have bought out the entire store to acquire a bunch of stats. With BROcity being a f2p browser game they do allow you to make some in-game purchase with Hive. The game uses Hive Keychain as a secure way for the player to make purchases if they decided to go that route. There are only four different kinds of things you can buy in the store, cash, gold, VIP, and energy.

Cash is sold at a rather reasonable rate. I purchased $170k for just 2 Hive and went on a bit of a spending spree.

What is more tempting to buy is gold and for as little as 2 Hive you can buy 80. This is also the more expensive item to buy in the store at the higher tiers that offer better rates per Hive spent.

The only thing you can’t get elsewhere in-game that I’m aware of is VIP. There are a couple of items in-game that are locked behind needing to be a VIP. Outside of that there not much use of it. It is also only 10 Hive which for this kind of thing seems cheap at the current price for Hive.

Finally, there is an energy pack to buy. Frankly, I’m not sure what someone would need to be doing in-game where spending the very low price of just 1 hive for 100 energy even that cheap would be worth it. Energy is quite an easy thing to refill often at a much higher rate than I was spending.

As far as spending Hive on this game goes I felt it was rather reasonable rates. I’m not quite sure what the game's monthly expenses to run is. Outside of VIP which only the top players would have the kind of in-game assets to be able to afford those items locked by that requirement anyway. The player may not ever have to spend a single cent on this game to just enjoy it. While BROcity claims to be an MMORPG it is as much as one as many other browser games out there. There are a couple of elements because it is an online game. Outside of that, I do feel it’s a bit overhyped.

Two things I did not do that require interacting with other players is street racing and fighting. Almost every time my character was already busy or there was just no one around to be matched against. When there was they were one of the top players with the best items in-game. So it would not have ended well for me.

There is also a leaderboard that shows the top players.

The other online element is you can view another player’s profile. So you can see what home they have, level, stats, and a few other things.

I guess you can just call me an MMORPG snob as I was not feeling this gaming being that.

I’m willing to admit this game had a lot more to it than I was expecting. I did like the player not having to spend any Hive on this game just to see what it was all about. I’m not the biggest fan of energy systems and having to be around every 15 minutes to an hour to manually collect things and perhaps that is where having a limited queue system further expanded by being a Vip might make the game more enjoyable.

It will be interesting to see how this game evolves over time. It had quite a few features and different things for the player to do.

Screenshots were taken and content was written by @Enjar. Screenshots are from the game BROcity.

This game has closed.