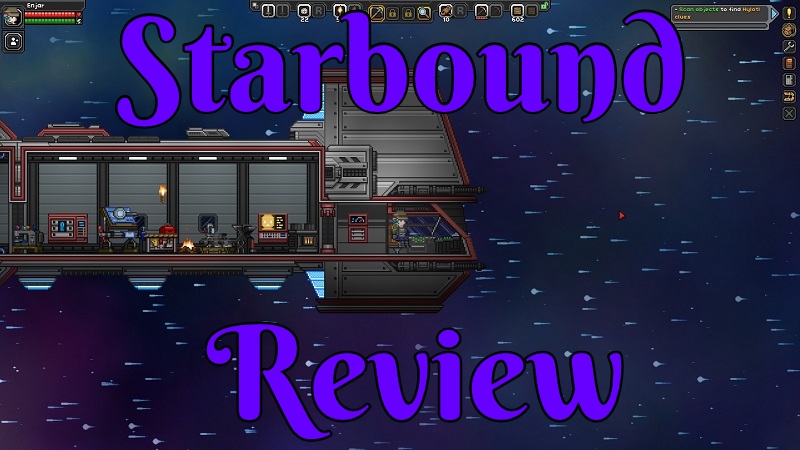 Starbound is a survival adventure game with elements of exploring planets, battling bosses, dungeon, mining and so much more.

When you first start off the game it has a little bit of Terraria once you made your way down to the first planet and start mining for resources, cutting trees down and even building a little place to house all your crafting devices. The game shortly after that takes quite the turn when you start visiting The Outpost for quests and traveling to other planets on your ship. The adventure really starts to take off once you enter your first dungeon and get killed for not being ready. 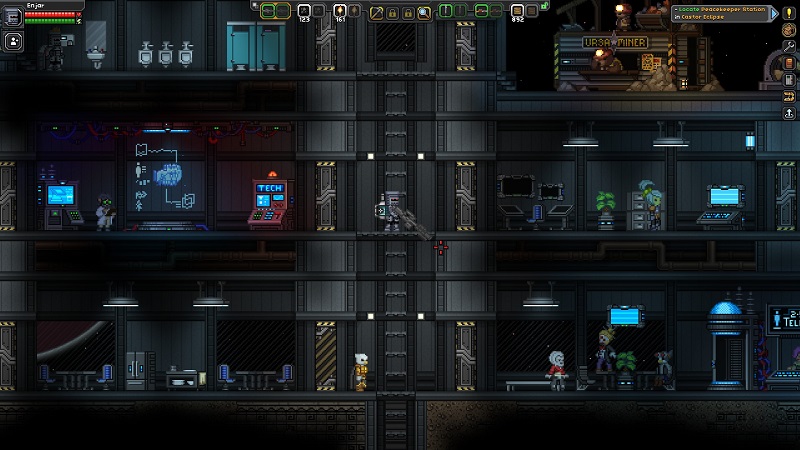 While Starbound is an open world and you can just take off on your ship in what appears to be a massive universe. The game itself can be rather quest focused on the player being challenged to go to different planets in order to progress. Along with things like skill being, ship upgrades, and other items being acquired at the Outpost.

The Outpost has quite a lot going on in it. If you have the money in-game to buy something chances are you don’t need to go out and farm it yourself as there tends to be a lot of vendors with goods for sale. I myself prefer having to go out and acquire materials needed for crafting upgrades for armor or environmental packs. As such, I found having money mostly useless outside of buying ship upgrades which made it bigger. 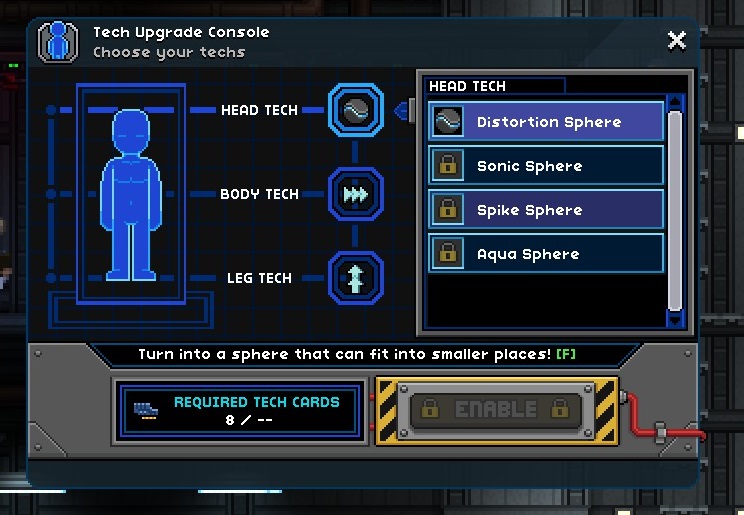 This place is also where the player can make needed upgrade and skill learning. Without the proper skills tech, there will be areas you are just unable to get to in general. On top of that without some kind of jumping skill, you have issues getting up and down platforms as your armor starts to weigh you down. The hardest part is finding Tech Cards needed to unlock different skills and this will really slow down your gameplay.

The main quest has a two-part cycle per section. The first part gets you to explore a new type of solar system where you are out scanning objects on specific types of planets. The second part has you fighting a boss. Due to that, it has this repeatable rhythm to it that can become a bit lackluster once you have done it a couple of times for each of the different races. 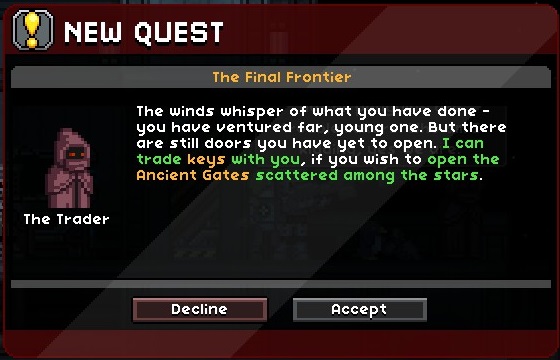 Outside of that, there are other quests to be found in the Outpost and they can range from going into instances to fight bosses to other things like racing and collecting. Most things reward the player with a quest bag that can contain externally hard to find manipulator modules for upgrading their main tool and other components.

It has been a while since I’ve played a game that had such a huge focus as a quest hub to this extent. While it did remove the frustration of not just finding out in the wild a quest NPC. it did remove some of the fun of it. This place overall felt like a way to make the game easier when the rest of it can be quite punishing. 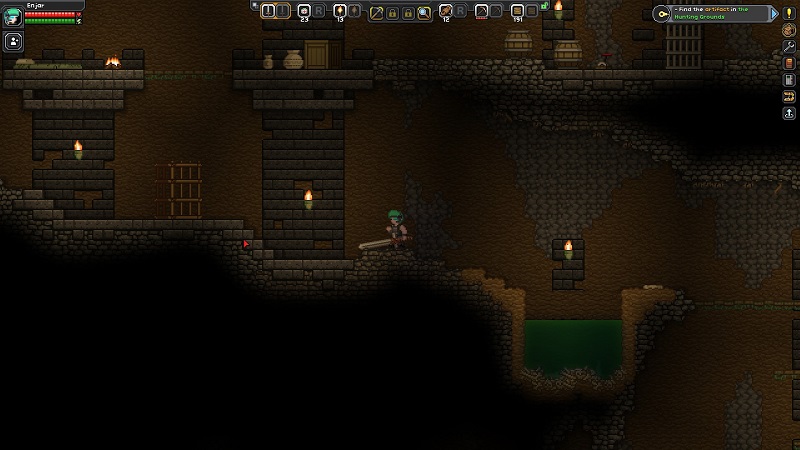 Starbound can be quite a challenging one where you will die, die, and die some more as you struggle to find your place in it. It can require a lot of moving out of the way of attacks, crafting the right equipment pieces, and just being overall prepared for the adventure each quest will take you on.

While you could find dungeons naturally while out exploring as well. Those tended to be more places of interest than anything else. They were also far less challenging and often played other roles in Starbound. Such as finding a place that contained many objects to scan and had a bit of history behind it.

In terms of getting to the more challenging dungeon locations the game often made that easy on the player. You had a system on the ship called Ship-based Artificial Lattice that allowed you to teleport into a mission that had a dungeon component to it. This for how hard this game can be was a nice element that did not try and add any fluff to the player experience. 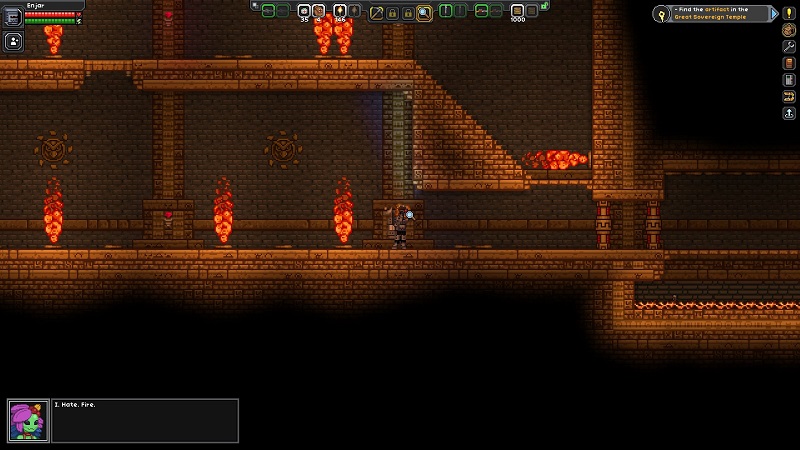 These dungeons would often be filled with tarps, mini puzzles and a bunch of other things the player had to survive. Each of them was a little bit different and provided a new experience every time. Some of them would involve timing movement while others parkour challenges for the player to face.

Many times the challenge was just getting to the end boss encounter in one piece. If you were underprepared you would just get wreaked and burn through any supplies you brought like bandages, medical kits and so on. 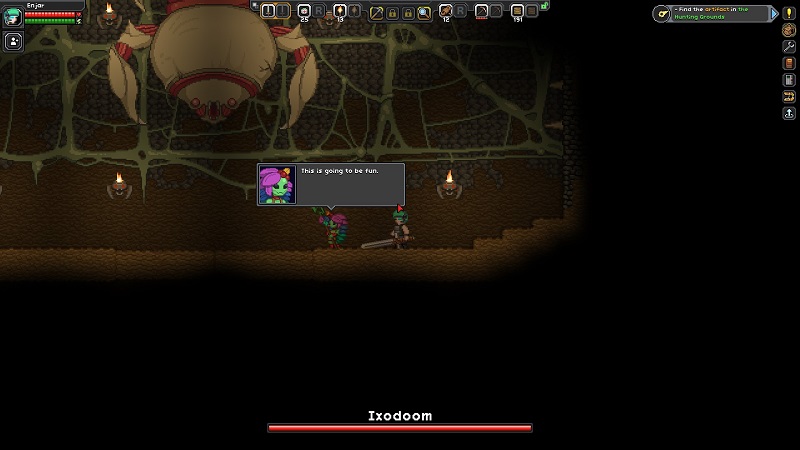 The most challenging part of them all was the boss fights. Thankfully before you enter each one there would be a respawn location so you did not have to fear getting killed and having to start all over from the start. They were quite the challenge and really required the player to jump, dodge, and move around the battle arena you ended up in.

On top of that, they all were a bit different. While some of them could be purely damaged down with melee or ranged weapons. Others required you to use things in the room or target certain parts of the boss at the right time to even cause any damage at all.

As someone who does enjoy dungeon crawls I found these quite reward overall. There would be loot and blueprints scattered all over the place while clearing them out. The bosses at the end usually provide a nice reward chest as well to loot. This was another fun part of the game once you were prepared for it. 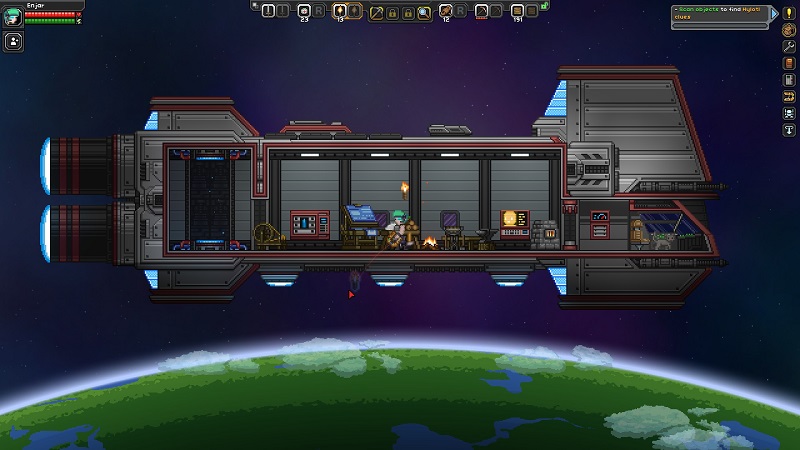 While Starbound has quite a lot of options for building a nice house on a planet I ended up just living out of my ship. I liked the idea of having a mobile base and you could expand it as well which gave me more than enough room to not mess around much with building a house itself.

Starbound does have quite a few crafting stations for making gear, weapons, smelting ores, and a bunch of other stuff. All of these crafting stations could also be upgraded as you progressed onto harder planets where you would come across the materials needed for the upgrade. This made it have a nice progression feeling every time you upgraded them to unlock the next tier.

The biggest part of the spaceship itself was used to warp function that burned fuel you had to mine at moons to travel to other stars. Once you arrived in that solar system there was no fuel cost just for going to different planets within them. I would not have minded some smaller fuel cost but I could see players getting stranded so that removes anything else needing to be added to resolve that kind of issue.

For whatever reason, the UI itself did not make it clear how to travel between planets or stars once you had fuel. Perhaps I missed it in a quick message during a quest. This had the effect of me mashing keyboard buttons to discover it was just the right-click all along. Kind of strange to not make it more clear but ok. I would have preferred something more thrilling like clicking a button to warp. 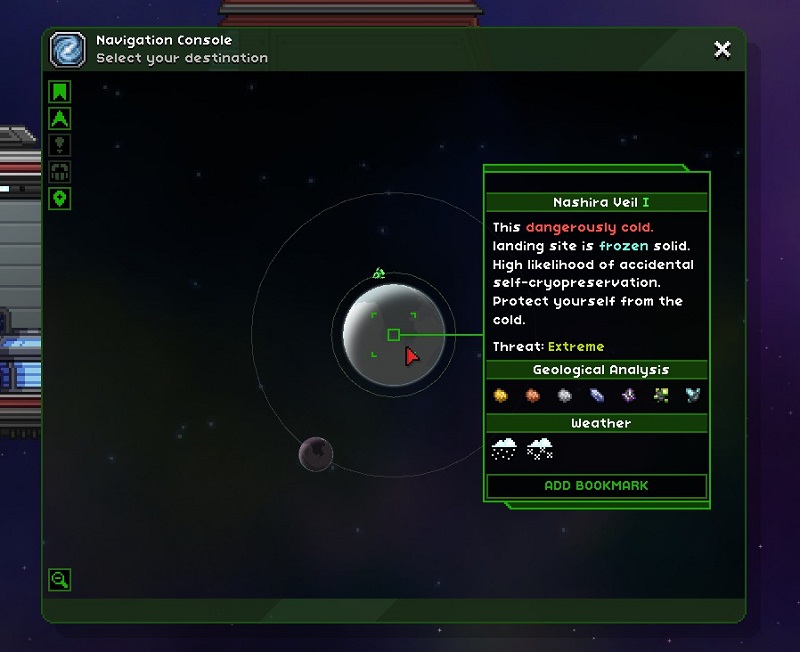 The in-game map did prove a nice readout of everything you would find on a planet resource-wise. Along with how dangers it was and any other hazards the player needed to prepare for. I rather liked the simple but straightforward layout design it had.

The ship also served as your main respawn point. So every time you got killed you would end back at it. With how much time you could end up spending here I could see a player spending far more time than I did try to make it feel more like home. I, on the other hand, am more of a function focused player so I never dived into decorating the area or going further into setting up my own base outside of the ship. 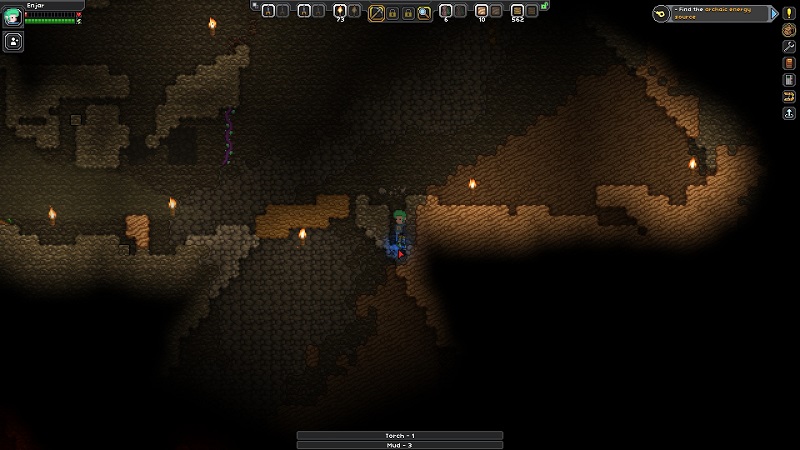 This was one of the more fun parts in Starbound for me personally. I just love going off and looking for caves to explore hoping they lead you to the core of a planet and be filled with riches. I was shocked at how often and easy these where to find.

As you need to find different ores and materials for upgrading armor, weapons, and crafting stations. It becomes rather important to go mining with your Matter Manipulator tool. While it could become quite a time-consuming process to just start digging a hole thankfully there were more times than not this option finding ores quickly. 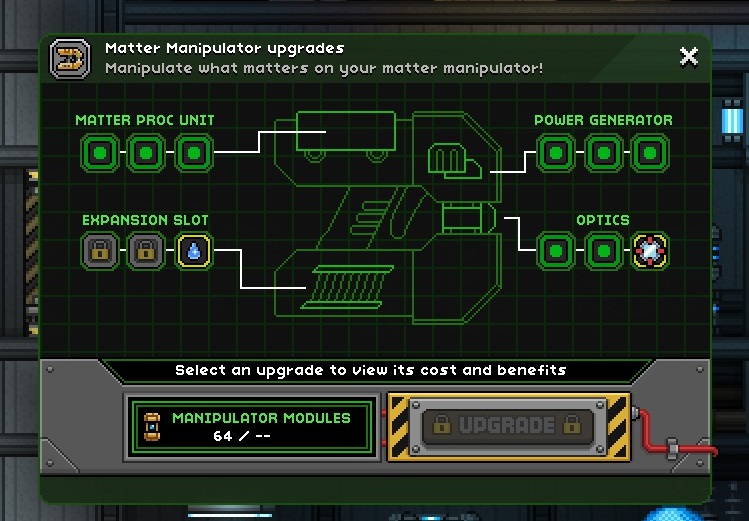 Mining in Starbound you did so using a device called a Matter Manipulator which you could upgrade its many subsystems to make life easier. Some of these upgrades would include increasing the area of effect of your tool while others increase the rate at which it is mind blocks. Both of these came in handy later in-game when it took longer to break a block. It was nice not having to craft a new pickaxe or a new tool every time you moved onto a higher tier ore or planet.

Even when I would reach the end of a cave it usually did not require much digging down before I would break into another one. Other times I could see with my own torchlight another cave just a few blocks away. This made it quite a quick process to get to the center of a planet if you were looking for the best materials to mine. 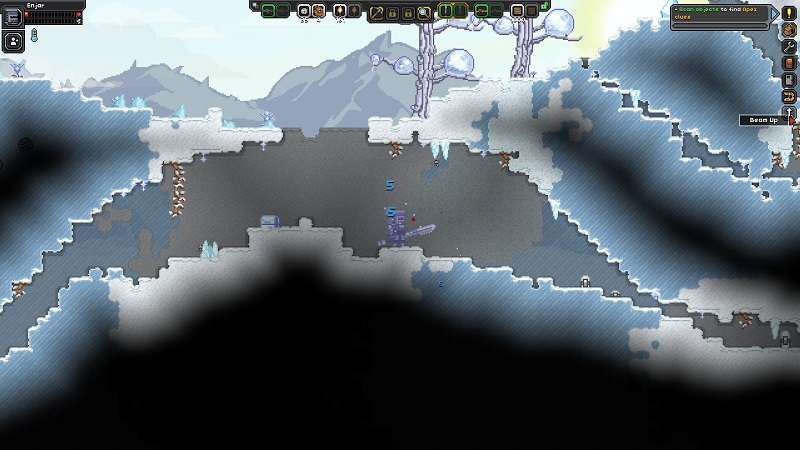 This also made for a great way to just explore around and see everything different planet types had to offer. Extreme environments required you crafting protection packs just to survive in them for any prolonged amount of time. Some of them would reduce your health down to almost zero while others you would be dead before you mined a rock. Creating some interesting hazards the player has to prepare for before going off on an adventure.

Quite a few times I found myself getting deep within a planet only to get killed by something lurking in the darkness. This was certainly that risk to reward feeling going this route instead of digging your holes and hoping you came across something. There were also leaps of faith down deep drop-offs if you did not have a better way to get down and did not have a rope or something to help. This created some interesting moments resulting in respawning fist-shaking and respawning in my ship.

While I do wish there was more depth in the main questing system itself the amazing dungeons and all the challenges that were in them more than made up for it. Overall while I did get killed a lot it was rewarding enough to keep pressing forward and meeting those challenges head-on in this game.

Screenshots are taken and content was written by @Enjar about the game Starbound.