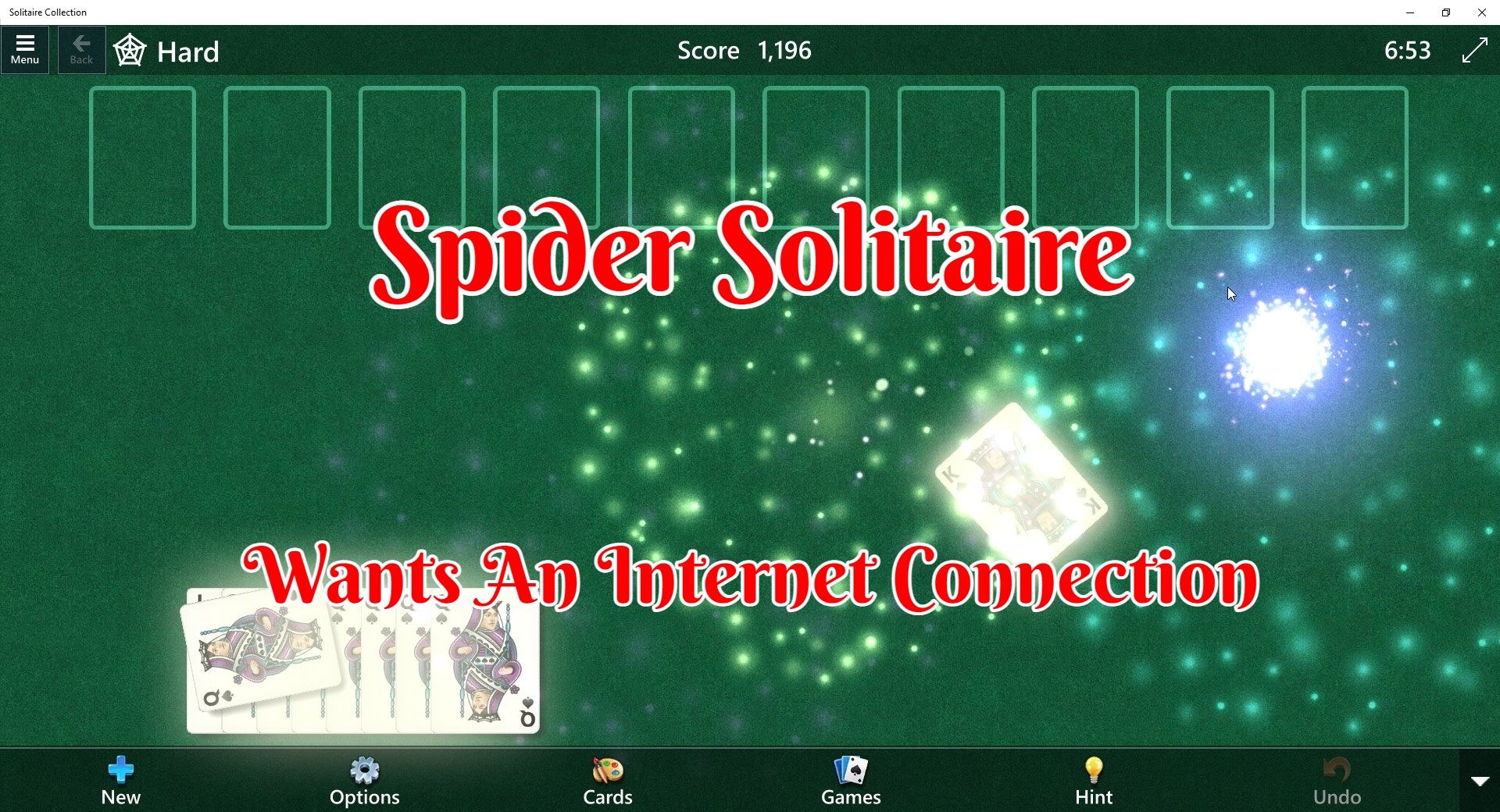 Last night the unthinkable happened! I lost connection to the internet. If you are a gamer you might have just had a slight panic attack reading those words. Why? We live in an era where everything including single-player games and applications needs . . . No, requires you to have an internet connection.

I immediately knew a bunch of games while I had no internet would no longer be playable. Of course things like MMORPGs well duh require an internet connection that is a no-brainer. It is however kind of sad and shocking what else requires it.

I have always been someone who enjoys a lot of single-player games. I however knew a bunch of games I have would not be playable unless they had a special “offline” mode. These days games want an internet connection to sell you stuff. It’s as simple as that.

There are even some single-player games out there that have anti-cheat built into them. I don’t know what kind of world we have come to that it matters if someone is cheating on a single-player game. It would be nice however if the gaming industry could instead put all its focus on dealing with an online cheater. That however is a topic for another day possibly.

So I went around seeing if I could find anything to play with or if I would be going to bed. One game after another either required an internet connection or it did not have my current play session saved. You would think playing on the computer every single-player game would be saved locally. We got to hand it to modern innovation or the lack of on that one.

Then I thought I have not played Spider Solitaire in almost a decade if not longer. I use to play it a lot after having a hurricane or if the internet was just down for that day. It has kept me from being bored out of my mind quite a few times over the years.

I went to search for it thinking I would see an option for it but it would not be downloaded as a standard thing anymore. Thankfully there was what looked to be it under the name Solitaire Collection. I loaded it up and there was an option to play the Spider version of solitaire.

It was also asking me to connect to the internet. Why the heck is a game that was released in 1998 wanting me to have access to the internet? That was just bizarre and the answer would soon be found out later. At least it was going to let me play in some kind of offline mode. Since this game was now packaged in a collection you now got points each time you beat it. While they did not allow me to play all levels of difficulty I could at least play it on easy.

I was quite rusty after all so playing it on easy sounded like the best option. The first two or so games I played I lost. After that, I would no longer lose a single easy mode game. I managed to knock the rust off my skills. I however was trapped in easy mode.

Still, though I could have a lot of fun just playing it on easy. I was never an insanely good player in this game. Spider Solitaire was however my jam when I had to play it on the computer. I prefer to play the real Solitaire with an actual physical deck of cards.

After some time I went to start another game and it just sat there frozen. After a short while, an advertisement popped up. My internet had been restored. This ad was un-skippable by default and if the window was not in focus the annoying and loud video would also stop playing. If I wanted to skip the ad I could just pay. For just $14.99 a year I could pay to play a game I’ve had “free” on windows since 1998 if I recall. How freaking ridiculous. To make matters even worse there appear to be options to make an online account by connecting an email address. Hard pass on both of these options.

At least now with an internet connection, I could play harder than easy and I did that for a while. I had some great fun. After a few more games I went to bed.

The next day I thought why not enjoy some more Spider Solitaire. I went to go search for it again on my computer and the returned results were to go to a website to play it on. I can only assume the very website it wanted me to sign up for in the first place.

So I dug around and I ended up finding the Solitaire Collection by Microsoft application. Why this did not come up in a search when web-only content did? You got to give it to Microsoft to drop the ball on that one as well. 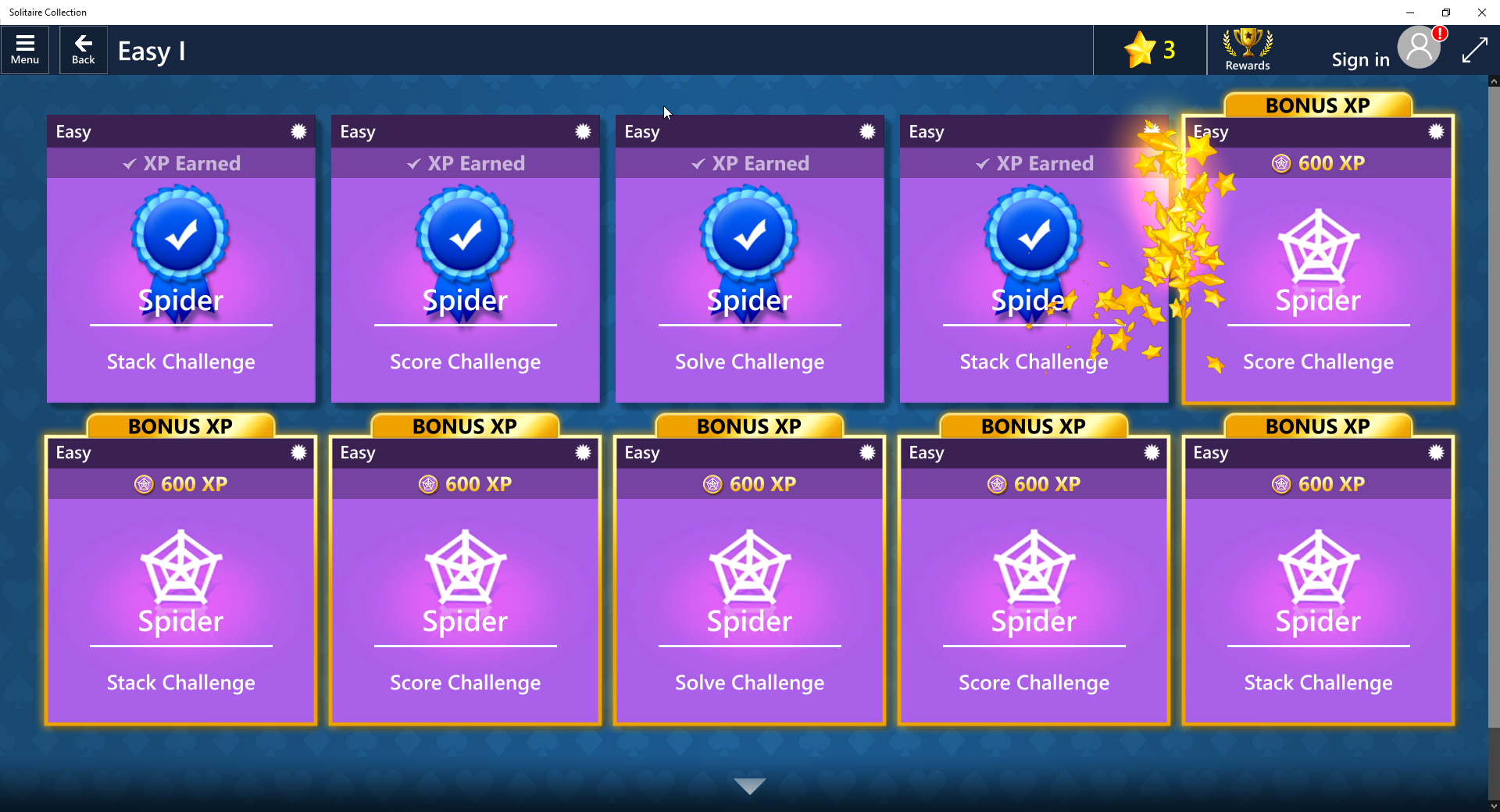 So I thought I’d check around and see why this old game wanted an internet connection. To “improve” this game they give you a score that allows you to gain level-up ranks and yes gain “rewards.” They also added in a bunch of challenge modes.”

These challenge modes gave you extra points for leveling up when you complete them. They were so earth-shattering good (wink) such as stacking a deck, completing the game, and getting a high enough score. Once you meet the objective the game ended. No chance to finish playing it out. 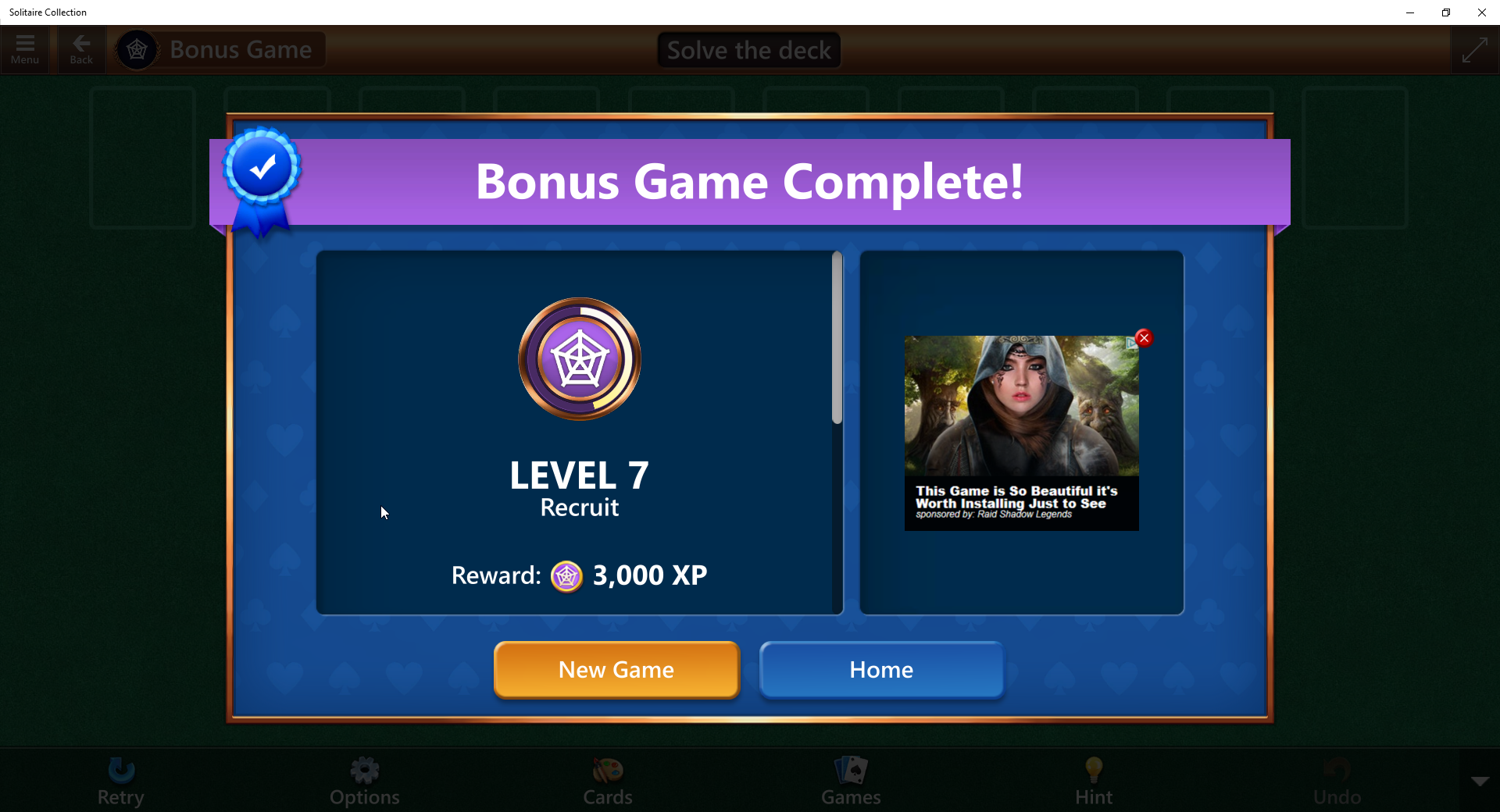 I also noticed my reward for having an internet connection on top of the video ad I was getting every couple of games was them slipping an ad into the winning score screen as well. I swear there is not a corner of the internet that is not filled with Raid Shadow ads. If I only wanted to play easy mode it would be a better experience for me as a gamer to just unplug my internet. That seems like an odd way to do things but at least this game works without an internet connection. I can’t say that for a bunch of “single” player games I have. I am not paying a yearly fee for something that did not need a couple of extra windows for challenge modes. This would not have been that hard to add in the first place and not warrant that much money per year for such easy work.

Screenshots were taken and content was written by @Enjar about Spider Solitaire. This game was part of the Microsoft Solitaire Collection.