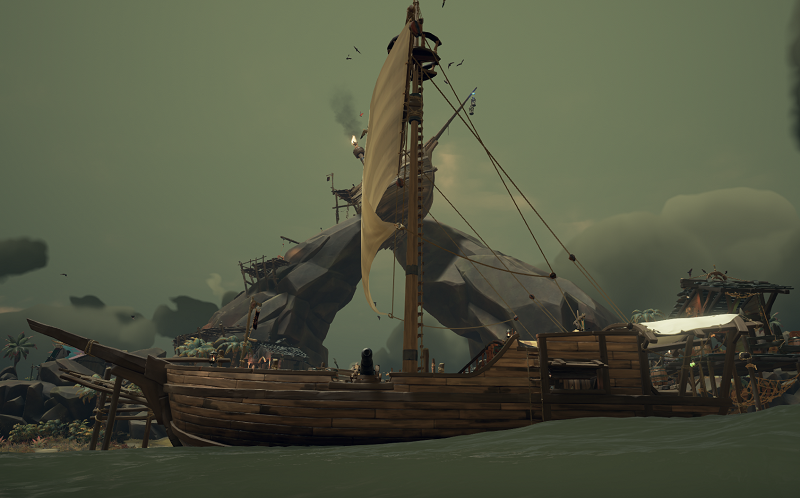 A few things this vile rat has learned in his yarring and running when outgunned like a shivering swag of a dog. While most of these should not be any shock. They are things that need to be said. You never know when the slightest change in how you approach something can win you a boatload of loot or save your own booty. 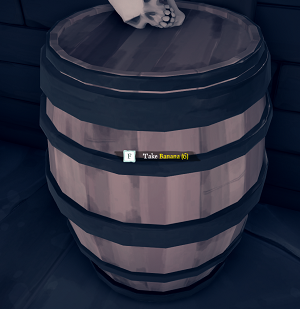 When you first spawn in with your crew make sure to loot all the barrels for extra cannon balls, planks of wood and bananas. Nothing worse for a fresh start than getting out there and running out of supplies losing the battle.

How do you spot a noob in this game? They do not turn off the lights on their boat. Many think they are being clever by leaving them on hoping to scare people away thinking they are a bait ship looking for a fight. It is a pirate theme game after all. Almost everyone gets into the yarr and plunder spirit of a ship glowing like a Christmas tree. 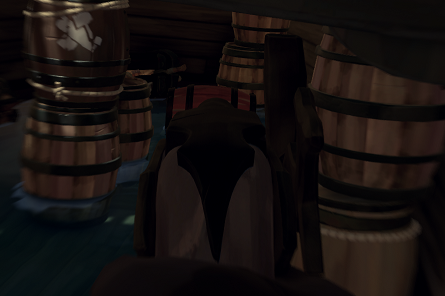 This stuff is great but can also be your own downfall.

If you are being chased you can drop one into the water and if they enemy ship hits it they explode causing damage needing to be boarded up (3 to 4 holes.) If the person chasing you is a solo player when they go down for repairs that are the perfect time to change directions so they are moving away from you without knowing it or try and getting aboard their ship to cause further chaos!

While many like to keep this stuff in the hold of their ship for easy access. That is also the ideal place for the empty to blow up gunpowder to maximize damage. Instead, keep it in the crow’s nest and only move it when needed. If they want it that bad they are leaving themselves open to being shot in the back while they climb and it's easy to spot them!

With that in mind if you can board another person’s ship with some gunpowder or they happen o leave it in easy to access places take advantage of them! Nothing like sinking a galleon with four people on it solo using their own gunpowder!

While it can take some practice getting it right. You can use the forward lunge attack on the cutlass to move quality in water either from your boat to land or vice versa. If you enter the water correctly you pick up great momentum for a short while.

While on the ship this is easy to do from the stern or bow of the ship. Since you are already above the waterline as long as the attack moves you off the boat you get the momentum. This is a much quieter way than shooting yourself out of the cannon to make landfall.

While near shore and wanting to head back fast to your boat while not holding any treasure. Right on the edge of before you start to swim if done correctly, you will move forward with great momentum right up to your boat. This one can take a few tries finding that sweet spot and not overshooting the ship.

5. Board Enemies Ships While They Are Chasing You 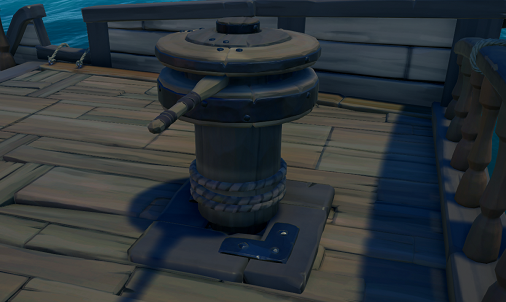 Just because you are fleeing does not mean you cannot play some offense while trying to escape. Make sure you are not about to hit any rocks. Then jump off your boat either using lunge forward attack or simply jumping off. While it can take practice and timing you should get good after a while to get up on their ladder as they pass by you in the water.

Once on board head for the anchor and lower it! If it is a gallon ship they could send two or three players just to try and raise it again in a timely matter. This slows down their chase on you quickly.

If you are still alive after doing so consider looking for gunpowder barrels to blow up.

Also, consider targeting people who are busy doing something else. They could be controlling cannon, repairing holes, or commanding the ship. If they are to busy with filing their role you can just take them out quickly before they can even react.

6. Getting Back To Your Ship 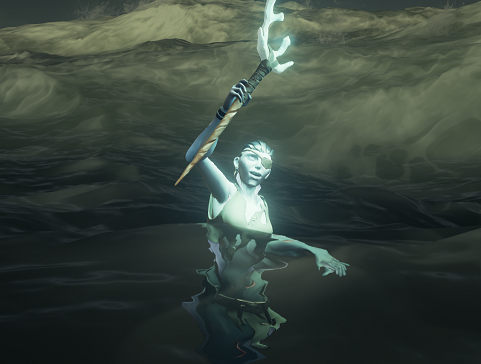 Sometimes you might find you were knocked off by a cannonball that hit your ship. Other times someone stole it while you were unloading. You could even have been aboard another ship causing damage and now wish to get back to yours.

No matter what it is if you are far enough away from your ship a mermaid will be close by for you to use to get back. NEVER stop for someone who fell off the boat even more so if you are being chased. Let them respawn back on.

7. Know What Empowers And Weakness Skeletons 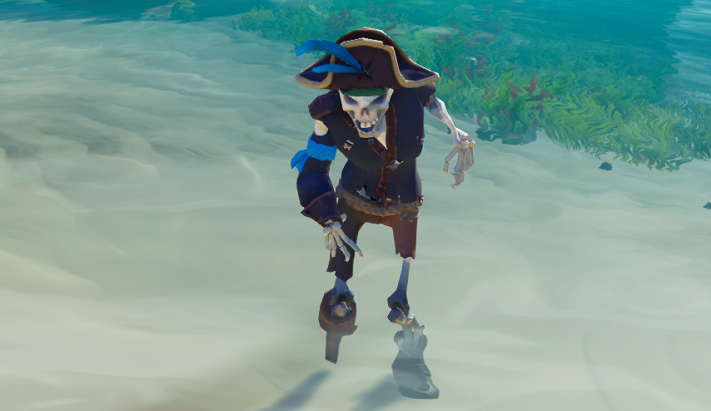 Nothing worse than sinking 10 cannonballs into a plant skeleton during the middle of a storm and not understanding it won’t die.

Plant skeletons are weak to slashing damage from your cutlass. They are resistant to gunfire and cannonballs. If they are standing in water or you are in a storm good luck trying to kill one—best to get them out of the water.

Shadow skeletons are vicious creates during the night or in darkness. Try luring them toward some kind of light or just wait for daylight when they are extremely fragile. If you have other people in your crew one person can hold up there lantern to weaken them with everyone else attacking.

Golden skeletons hit hard and take a beating as well. Carry a bucket of water with you to make them rust, fight them during the rain, or lure them into the water to weaken them. Suddenly they only take a couple of pistil headshots to take them down. While you get to stay out of there nasty melee range.

While it might sound gross if you puke you can take out the bucket and store it there. What does one do with such a bucket filled with insides of a vile rat? Well, you toss it on other people making it hard for them to see for a short time. I like to use it while people are trying to board the ship!

Nothing like letting some wannabe pirate trying sneak on board your ship to plunder know that you are so into unconventional war tactics! They might just decide crazy is not worth trying steal from. 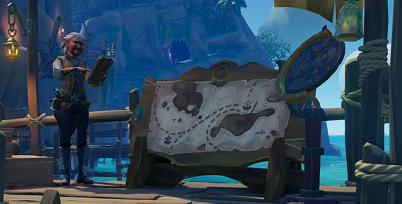 There no reason for you what so ever to only be turning in voyage where they just want a single white chicken. In fact, you can start a voyage and collect cages from the NPC. Then cancel it and start another one. This way you can get a load of cages for chickens, pigs, and snakes! You then can focus on going after and turning in higher gold, black, or red ones for more profit. Why take on a voyage where you only turn into one animal when you could get one that has three or four? 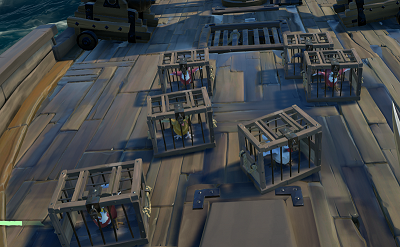 Love them or hate them they are the main source for Merchant Alliance voyages. As such you need to take care of some more than others. While it’s a good idea to make sure they do not take bullet or cannon damage. You also want to make sure they are not in the hull of the ship and drawn either.

Chickens are so easy to take care of. You just capture them and you are done as far as their needs are considered. They pay out from highest to lowest: Golden, Black Plumed, Red Speckled, and White Feathered chicken.

Pigs require food or they might not make it back to an outpost for you to sell. When they sit down and start making a bunch of sounds it’s time to feed them. They pay out from highest to lowest: Golden striped, Black-Coated, Pink and Black Spotted, and Pink Bristled.

Snakes can be annoying to handle as they bit back even when caged making you want to store them at the very helm of the ship away from everything. You can play music using any of the instruments in-game to pacify them for a short time frame. However, when you hear hisses and their head pops out of the cage they are just about to attack again. They pay out from highest to lowest: Golden, Black Scaled, Blue Dappled, and Red Striped.

Screenshots taken and content written by @enjar from the game Sea Of Thieves developed by Rare.