Satisfactory is a factory building game where you can build massive production lines to fuel your ever-growing demand for resources and parts. The player can choose to build a more compact but vertical layout or just expand across a vast area. Progression is focused on turning in a high amount of parts. While there is a little bit of combat it’s not a major feature to the game. The main focus of this game is building a factory of production lines to produce all the different resources and parts you need. This game has quite a fun twist in adding in the ability to have multi-story factories. This requires you to think a bit more when placing down things like conveyor belts and dealing with the overall design of the area you are building out.

Part of the fun is the game dose allows you to build foundations, ceiling, walls, and ramps. So if you wanted to build an indoor factory with quite a few floors you can. This however is also not required as you can just place constructors, smelters, and storage contains right on the grass.

I preferred building on a foundation as I found it helped me try and keep the layout a little more organized. I ended up having the bottom layer that I placed down on the grass as my original area for manufacturing when I was first starting.

Naturally after that and not wanting to delete anything active I ended up placing a massive foundation over everything in the valley I was in. That ended up housing more advanced productions and even further expanding out my capacity for creating basic low tier parts.

Over time even in the massive valley was not enough. This is not like some factory building games out there where everything is usually small in scale. Quite a few of the buildings I needed had ladders so you could climb up if you wanted and take up a fair amount of space. Which I found oddly satisfying as I watched resources being feed by conveyor belts into the assembly lines I had set up. 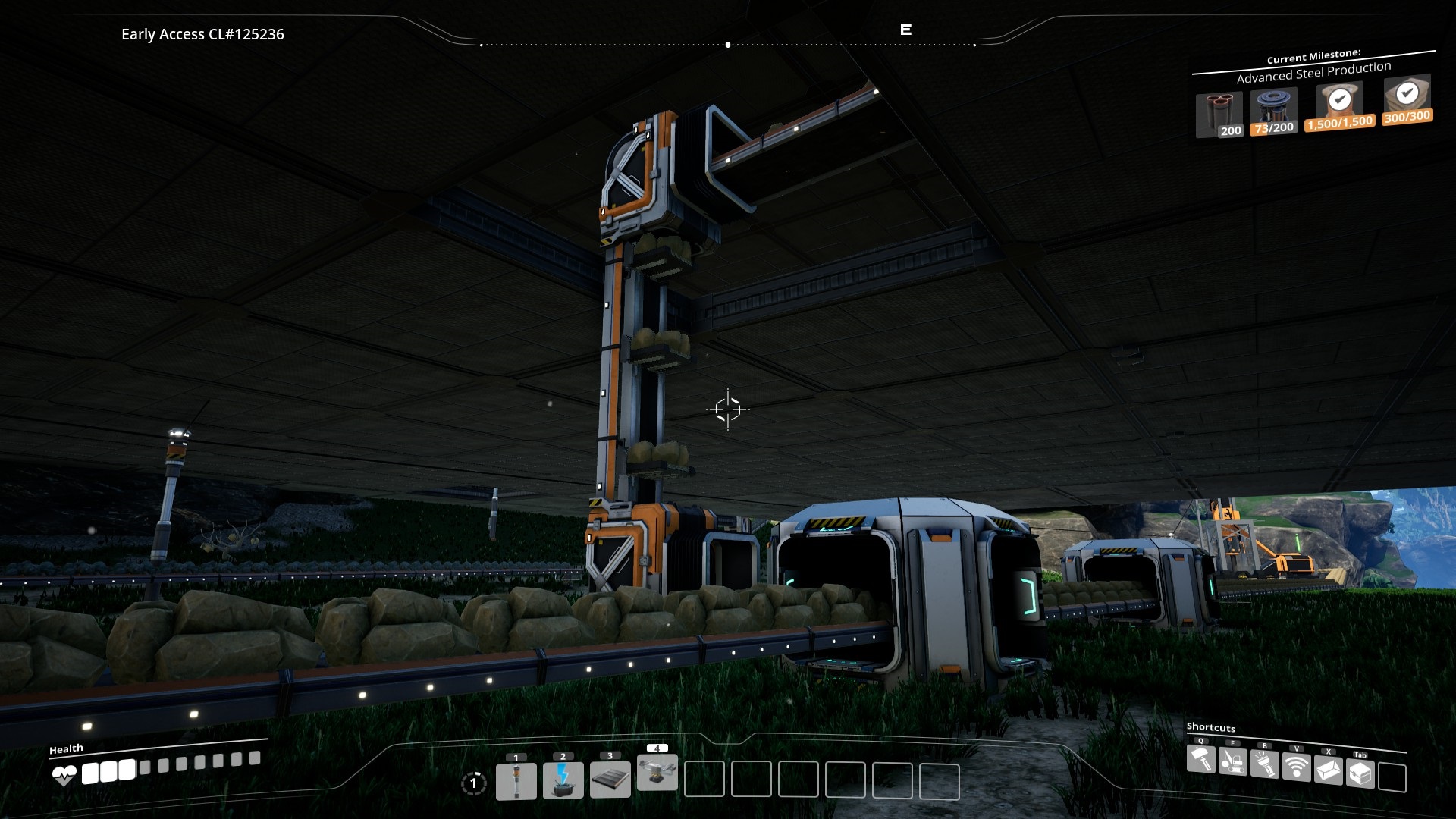 There is a decent amount of functionality with conveyor belts. The player does unlock the ability to combine or split them. Ways to vertically move resources between floors. Even the inputs of some of the machines start requiring more than one input to make a product. The great thing as your production lines get more advanced and things start to scale is you can quickly dismantle and rebuild to meet your demands. The process of dismantlement is just a couple of seconds. You even get back your cost of the building and anything that was in the production line. Making it cheap and easy to make changes without having to shut everything down and go around collecting resources first.

I could see a perfectionist redesigning their factory layout quite a few times. I have let things just go wild but I do feel I am overdoing from dismantling everything and starting over. It is a bit of a mess on my floors and soon it will be hard to find things. The building themselves are quite easy to manage. Instead of needing many dozens of different types of buildings with each one focused on just a singular item it could produce. The player just selects a product recipe they want that building to make. Instead, the different building types are focused on the number of inputs they proved depending on how complex the item being made is.

During the process of placing buildings down the game can give you a guideline if you are lining up with another object. This I found quite helpful in keeping everything neat and organized. Nothing more annoying than placing a storage container down to realize it's off-centered from the output of production buildings.

This game is in early access so not everything is as intuitive as it could be. I have found a couple of times I’ll change the rotation of a build and place it down. I’ll then place another building down that it feeds into and sometimes that other building will be facing the wrong way. Least it’s quick and easy to fix.

The biggest thing I’m not thrilled about is the powering of building situations. The power poles I’ve had for quite some time now only allow up to four connections. You need one connection to hook it up to another power source and sometimes the remaining three connections are not enough for a single production line. So I just have these things spammed everything. Thankfully they are listed as mark 1 so I am hoping there is a mark 2 variant with far more connection points.

I have found this part of the game to be rather relaxing. Sometimes I just walk my character onto a hill or a building and watch it all in action. While I’m waiting for enough parts I need to unlock the next part of the game. This usually requires me having to build even more production lines and further madness in my growing factory. 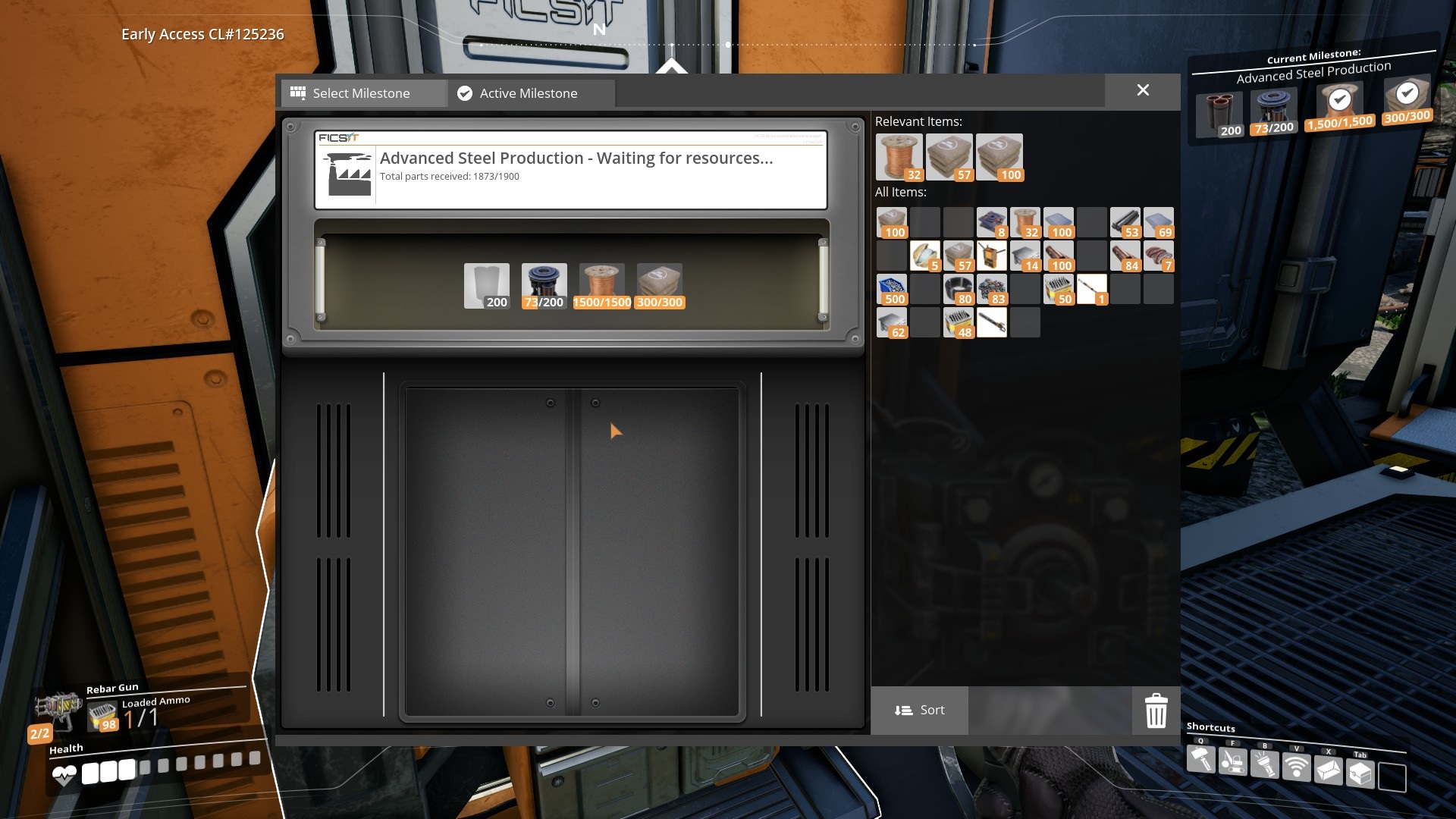 The game is heavily focused on using a milestone questing system approach for allowing the player to progress into deeper tech. These milestones themselves are turn in missions that require a large number of items. They are also unlocked in pairs by an even bigger item sink that requires more resource-intense items.

Early in-game you can do quite a few of these milestone quests by hand. You don’t need much of a factory at all. Crafting items by hand tends to be a lot quicker so I often found myself just holding down the space bar at the crafting bench.

At later stages of the game, the sheer quantity of items needed would make trying to craft everything at the bench a nightmare. You do reach a critical point where you need to have some production lines set up of quite a few basics. Even further along you reach a stage where the parts being produced are just to advance for the crafting bench to have a recipe for. A lot of those parts tend to show up first at being needed for the space elevator shipments which helps unlock higher tier milestones for the player to accomplish.

Each of these tiers unlocks had several milestones for you to complete. Sometimes you are just being rewarded with a higher tier recipe of an item like conveyor belt MK.2. Other times you would be rewarded with a new way of doing something entirely like being able to make truck stations for transportation between distant nodes.

This style of progression does turn into a massive item sink that drives the player as the main factor to expand out there production line, automation, and how large in scale their factory becomes over time. Otherwise, you will be waiting around for quite some time just to get enough parts to turn in and move forward. At least in the current state, this game is by no means a tower defense game as many factory building genres tend to be. Instead, anything you run into if it even is hostile is just protecting mining locations for the most part. There was not a whole lot of depth to this part of the game and that was fine by me.

I found myself in the early days to be a struggle when going out to explore with how easily I got killed. Even the starting area could be a bit challenging if I was not paying attention. The starting weapon is quite weak and requires a few uses at close range combat to defeat anything.

There where event moments where I was doing corpse run of corpse runs just hoping to take out hostile creatures that where guarding a mining node I wanted to use and recover what items I lost. There does come a point where the player needs to upgrade and build a better weapon.

Once you have something like the Rebar Gun combat goes on easy mode for quite some time. Between having ranged combat capability and being able to easily dodge a lot of incoming damage as well. Combat becomes trivial unless you run out of ammo.

The main area I build my factory in dose not become overrun either by anything hostile. Once I cleared it out there where no longer any threats. Even in areas where I’ve built a mining rig to harvest resources and convey belts to brining material back creatures don’t seem interested in damaging any of my equipment.

For those who get annoyed when playing this kind of game of having progress slowed by the onslaught of attacks on your factory that is just not something to worry about in this game. At least in the current stage and how far along I’ve progressed while playing it. I’m glad they did not try to add more of a combat layer as there are already quite a few factory defender games out there that do. While it does make combat a bit lackluster it makes this game stand out a little more. Sometimes you just want to build. 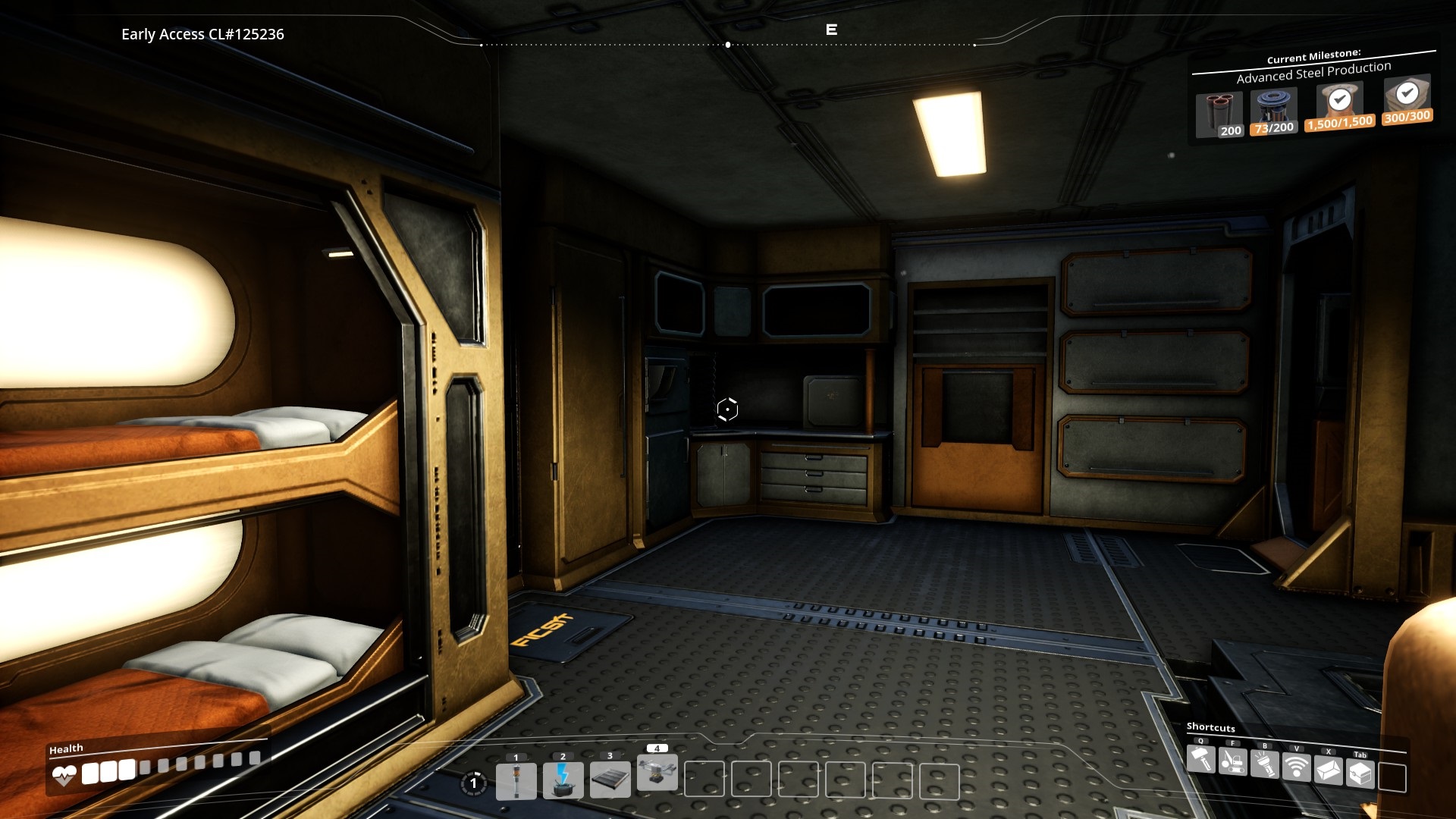 This is one of those games where I’m going to keep playing I have been enjoying it that much. I might even do a follow-up post or two showings off my factory as I redesign and scale it. This game can take some time to play. I feel like I’ve only scratch the surface with quite a long way to go. The name is quite fitting as it is Satisfactory.

Screenshots were taken and content was written by @Enjar. Screenshots are from the game Satisfactory. If you are thinking about getting this game and are looking to support me further consider using my Epic Games creator code: enjargames at checkout or using this referral link to be sent to the store's pages.

Disclosure: This game was in early access at the time of writing this.