Pendoria is a persistent browser-based game where the player can run certain amounts of actions before needing to active again. Along the way, you can perform main and secondary actions, sell the goods you gather to other players, increase your boosts, and the number of actions you can perform among other things.

I chose as my main action to be a battler so that will be my main point of view. You can also pick a trade skill like woodcutting or farming or mining, or prospecting as well. It tends to be best to just focus on one kind of the main action but you could switch between them all if you wanted. The main reason for focusing just one is you want to get to the highest level possible to gain more resources per hour. As a battler, you climb your way through 32 different lands. Each of these lands has 50 different monsters you have to defeat. Each battle or action seems to take around 10 secs and you will farm the monster you have selected until you run out of actions. Which then you just need to log in again and hit battle to start things off again.

Having a limited number of actions that run before you need to start it again makes this game a bit different than the normal style you see when it comes to idle games. Outside of how long an action takes you are not being limited by an action cap per day either. As such most players seem to focus on getting enough actions for the day for when they can’t be around to keep their character from going idle. 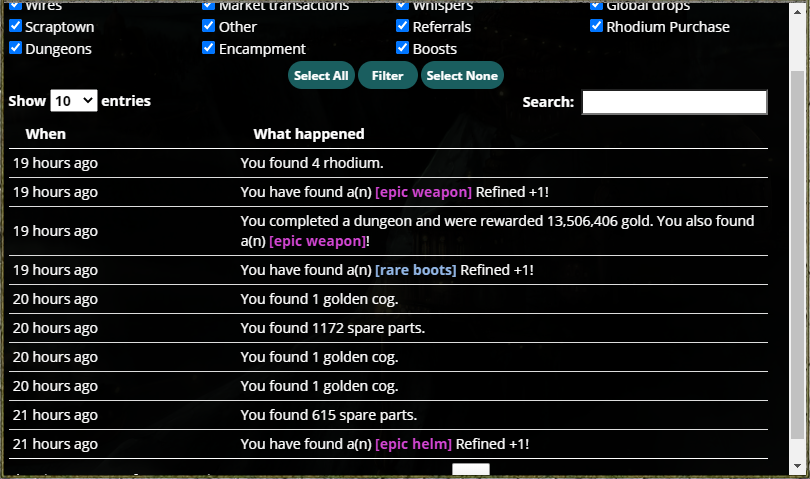 The game also boasts a large log nonfiction system so you can stay on top of everything that occurred while you were away from all the monster slaying. From loot, you acquired like armor and weapons to things more specific to the kind of actions you are performing like looting gold cogs and spare parts among other things as a battler.

With my around 1800 I would need to log in about 5 times a day to keep things going 24 hours ago. The bulk of actions I acquired where from joining a high ranked build that made major investments into having a high action account. Spending some of the in-game currency that you can either as a drop, buy from other players, or purchase in the cash shop. Along with increasing my actions in the Scraptown. Actions are king here and it was nice they give players so many places in this game to acquire more. As far as being able to progress as a battler I needed to increase my overall stats to be able to take on harder monsters. This was done from gear, random stat gains from battling, upgrading armor slots, buying boosts, and gaining levels.

One thing I noticed right away is things appear to be quite expensive in this game's economy. People want 10 to 100 billion gold just to buy some armor of the player markets. Which was never worth it and I ended up just looting want I needed anyways.

The main reason for some basic things like low-level gear being so pricy is you can scrap them for spare parts. People usually factor in quite the premium price if they are going to try and sell it as armor instead of breaking it down into parts and getting a quicker sale. Just one of my legendary items for example would yield around 1.1 billion gold worth of spare parts on the market. A huge area for growth is simply buying boosts for things like damage, armor, and different kind of starts. Depending on the kind of boost it might only cost one type of resources like wood and a lot of gold. While other stuff could cost spare parts or even Rhodium which is quite pricy.

I’m at a point now where a 1k increase to my base damage would cost 654 million gold and 45.78 million of a single resource. If I wanted to buy wood for a woodcutter for example they are going for about 31 each. So just this single upgrade would cost me around 2 billion gold.

That might sound like a lot until you loot some Rhodium which goes for about 800 million gold or less. They use to be over 1 billion each. That was until the game had an event and that caused quite the downward pressure on a lot of the items on the market.

I managed to get up to level 1695 and about 30 monsters into area 7. This feels decent for about 1 month of logging in almost daily a couple of times a day to keep things going. Progressing just a single monster further is taking more and more time. Sometimes I don’t even push my luck if I get killed by trying to go up one monster and just sit on the same one for days now. While your character is out performing his main actions there are secondary actions as well that you should be keeping on eye on to make sure they remain active. These are like quests and running the dungeon among other things.

Questing early on can be quite rewarding. There is just a single type for each main action. This just requests a certain amount of successful actions being carried out to finish them. As a battler, I would gain gold, rhodium, and spare parts.

You could even buy a boost to auto queue up a limited number of quests to keep it going while ago. That however was not very important I found over time. My next quest which is number 137 requires 3,730 battle wins.

While the dungeon is running you can gain a higher amount of boosts from dungeon upgrades. This can affect things like how much experience you are earning in my case 40%. Along with other things like a boost to gold drops which at a level of 1k lock pick I get around 50% boost. Some of these upgrades I feel would take a long time before they cover their cost to buy with resources and gold. Either way, always best ensure you have a dungeon running with the main actions.

While it would not be the end of the world if these things were not active. Like a lot of things in this game it all adds up. This is why I’m grateful you can buy some items to increase how many of these would queue up so you would not be logging in a lot more per day, also, to keep an eye on things. 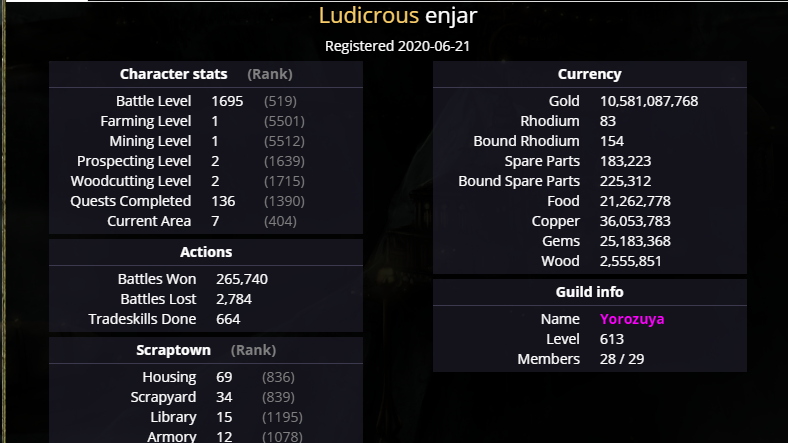 There are a bunch of other things to do in the game as well like upgrading the Scraptown to reduce costs of things, running encampments. You then also have the social aspects of just chatting with people which the owner of the game, admins, and mods can be seen a couple of times a day in the main chat. Along with getting help or seeing what guild members are up to.

It was an interesting game for I have been playing it for around 1 month now. While the game can go on forever which is in part the idea behind it. As even the players who have been playing since day one are not maxed out as that is not a thing. Things just get more expensive to upgrade and another area to work on can be easily be added from the looks of things. I feel like I’ve done it all and there not much more to explore.

Before anyone asks NO this is not a blockchain game. I found out while exploring this game there is a bit of a community behind persistent-based browser games. This is not a gaming genre I’ve checked out before so I thought I would see what it was all about.

Screenshots were taken and content was written by @Enjar. Screenshots are from the game Pendoria.