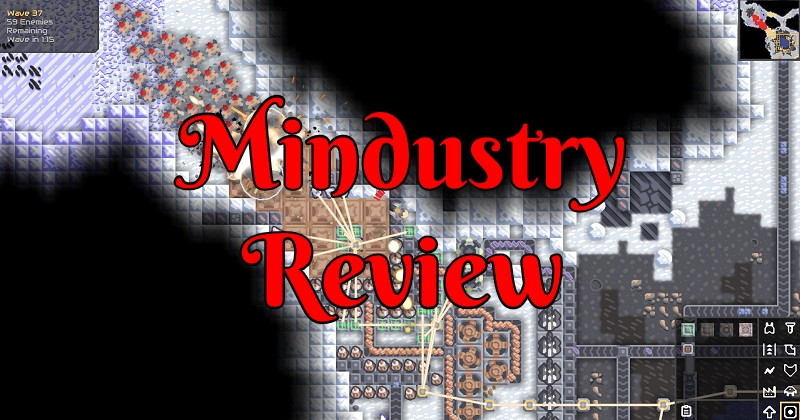 Mindustry is a tower defense game where the player gathers resources, builds up his industry and defends off waves of attacking robots. In the process, the player decides at certain wave intervals if they wish to escape with what they have stocked piled or keep going. You then can use those resources you brought back to unlock upgrades in the tech tree and open other maps. 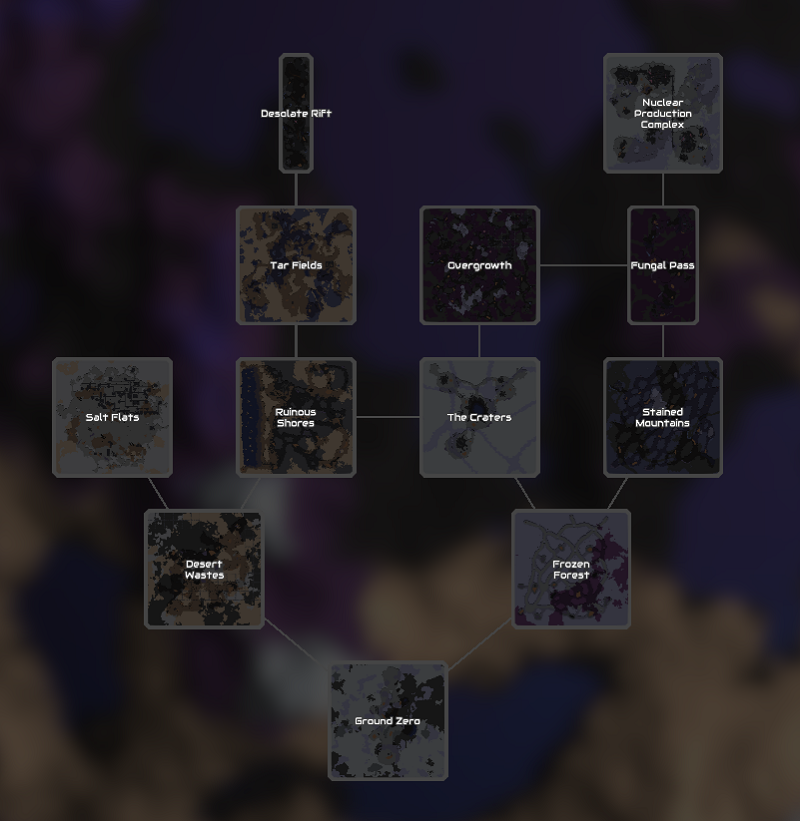 The game has twelve maps in total. They are broken down into two types of survival and destroy the enemy core. They also have a different theme based on their location which also has an impact on the resource that map will have as well.

For most of the game, you end up dealing with a survival type of map. In these, you just have to survive enough waves until you are given the option to lunch what resources you have left. If you decline that offer you have to survive long enough until the opportunity is presented again. This can sometimes be every ten waves or even longer. 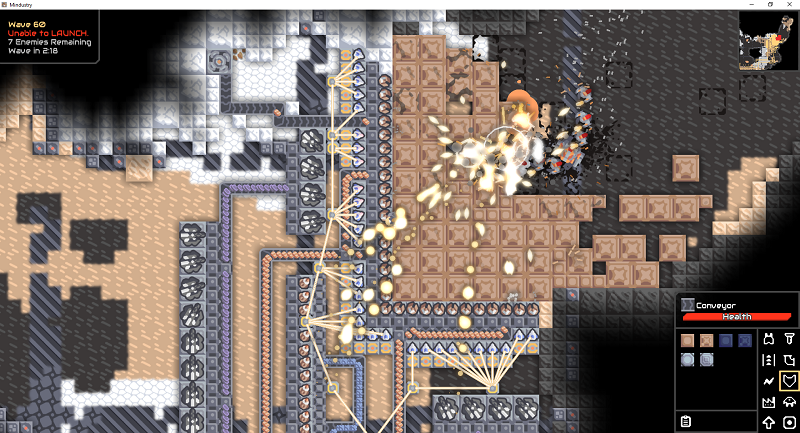 In these survival types of maps, there is no enemy base to attack. They just spawn in a location that you can usually fortify rather well. Leaving you the rest of the entire map to mine and build on. Some maps can be more challenging than others due to the sheer amount of paths the enemy could go. Thankfully the AI is not too bright and you can build out defense to control the path the AI will take for their ultimate demise!

Each wave can bring in higher difficulty and the number of robots you have to fight off. The game tends to start you off easy and slow. You get a minute or two to set up a base of operations and hopefully some kind of defense. If not the player tends to have enough firepower on the unit they are flying around on to kill off the first couple of waves. 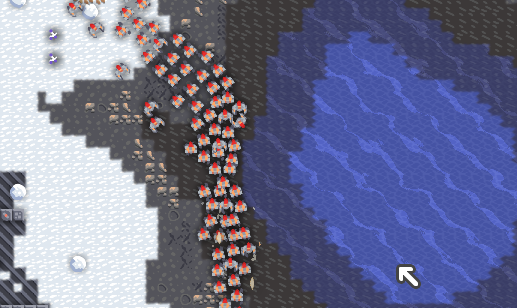 At some point however the numbers become quite overwhelming and the starter unit you control simply lacks the firepower. While you can unlock tech upgrades to increase its firepower of that personal unit that can remove its ease of mobility flying around the map.

The game will also start tossing in different kinds of robots. At first, you might just be dealing with ones that explode on impact which are quite easy to counter with a random wall in front of their path. Then along with those will come harder to take down ground troops. After that, they start to mix in some air units as well.

At certain stages, you could even find yourself fighting the boss mothership. I have found myself in an instance where I was so focused on taking out and rebuilding from the onslaught of ground units that the mothership was able to just fly right over my air defenses and survive. Leaving the rest of the map open for the attack as the mothership pleased leaving me feeling quite hopeless as I scrammed to put up more air defense in key locations.

As far as the weapon you get to use they tend to focus on ground or air units. This means you need a bit of a layered defense in the area you have decided to build up armed fortification around. You also need to feed resources into those weapons. Whether it be lead which you can flat out just mine and send on its way on a conveyer belt. That type of weapon might use graphite ammunition which requires you to mine coal and convert it into graphite before sending it along in a conveyer belt.

There are also the other types of maps where you not only have to defend yourself from incoming waves but the goal is to take out the enemy core as well. This means building your own factories and supplying them with the required resource to send your own waves out on offense. 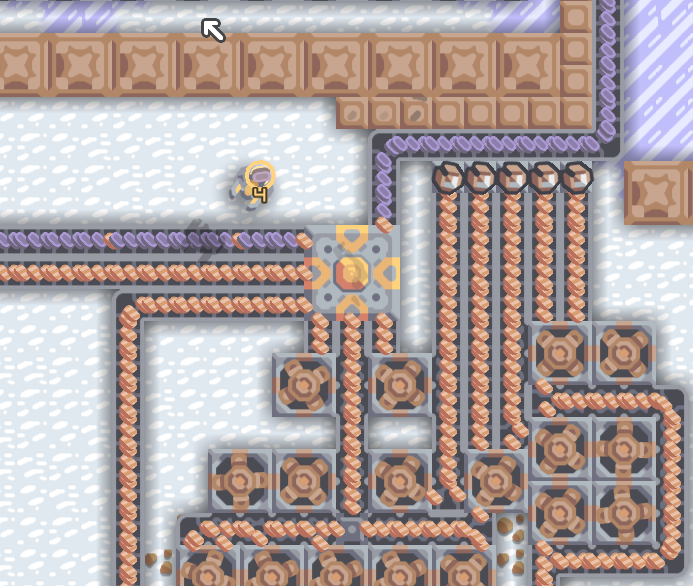 The core where you gather all your resources and spend building costs from plays a few critical roles. If it destroyed in either type of these maps it’s game over and you get nothing out of it. On top of that, it can also only hold so much of each type of resource where the lower maps have lower caps as well.

it is a fairly decent tower defense game where you could put most of your efforts on the front line and not worry too much. I never put too much effort into building out other areas with defense otherwise you just have conveyer belts going all over the place taking up valuable space. 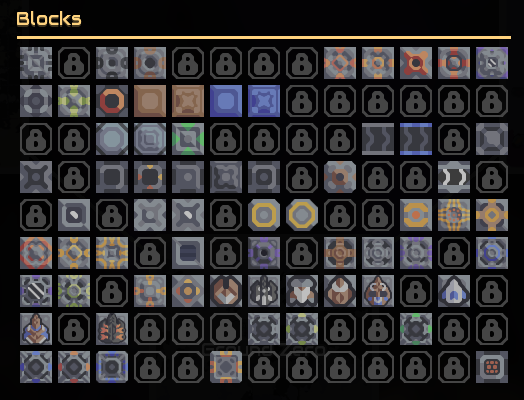 I’ll admit I’m not a very space-efficient player when it comes to building different manufacturing chains. Along with just trying to get everything back to my core. Space can become rather a premium and not planning things out properly can cause total chaos down the line.

Building out different manufacturing chains themselves if you wanted to take up a lot of room was not a deep or challenging aspect in the early game. You might need to mine lead, coal, and sand. They then get mixed in at different steps in the chain to produce a final resource you needed like glass. On top of that, you might need also to supply power to certain types of buildings.

Later on, when the power needs to increase the risks you need to take also increase if there are any interruptions in the chain. Your defense might become quite dependent power to run. The power plant if it has an interruption of coolant could explode when you start getting into the higher tier stuff! Being a tech-savvy empire can have its drawbacks when issues become bigger than just a conveyor belt feeding led into a gun gets to take out. 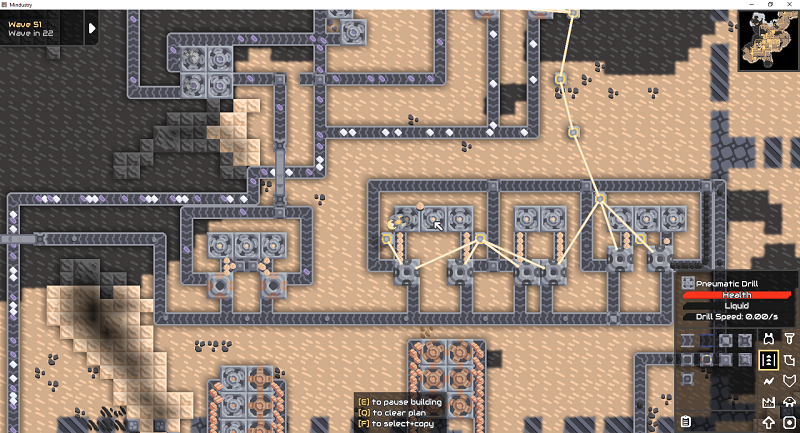 A lot of the time it was the moments of me not paying attention when quickly trying to lay down some conveyor belt that ended up getting me. You might end up on a map where all the lead is on one side of the map and you need it all the way across on the other side. Along with that path, you might be mining out difference resources as well. As a result, what you were hoping to be a clean line of just lead ended up getting mixed in with it titanium which clogs out the entire line once it feeds into something that does not use it. Items that don’t accept titanium are now blocked until you delete or remove what input it does not want from the line.

For max efficiency, you could have a lot going on to acquire as much as possible. Quite a few manufacturing and even drilling buildings can benefit from your piping water in for cooling. That is an entirely new line you need to lay down, cross over things, and hopefully have enough room to connect it. This can make things become quite the rat nest of working out what is going where.

Before you know it you have double your production rates but the power grid you have built up can’t support it. The defenses you have built have to fall back to non-power defense and they become overwhelmed causing you to be taken out. Sometimes it just was not worth trying to increase production if you are not ready for it!

The building part can seem like a simple process on the outside. Which I’m thankful there were not too many requirements for upscaling resource into higher grades to use further go down the production line. It does require some planning before if you want everything running without a hitch. Nothing worse than realizing all your guns are empty as a resource got sent into the wrong conveyer belt halfway across the map. 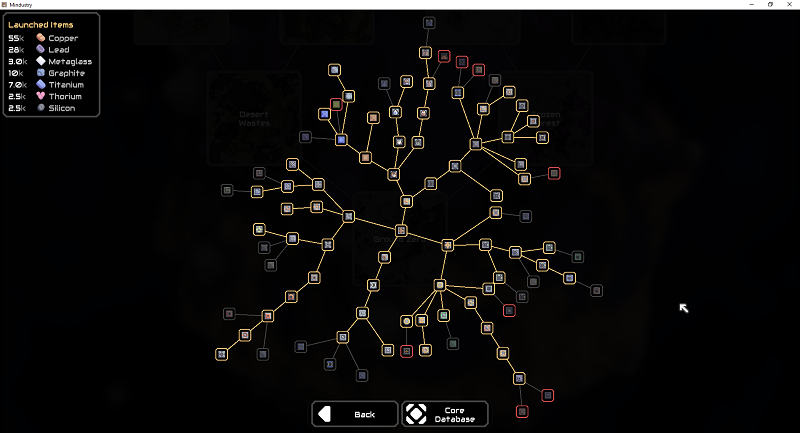 The tech tree in Mindustry plays a couple of different elements for this game. On one hand, you are able to go deeper and deeper into the tree to unlock more advanced weapons, power generation, walls. On the other, you need enough resources to do so which gives you a reason to replay maps you have already been in.

In many tower defense games out there unlocking a higher tier item would allow you to use it anywhere else in the game. In Mindustry not all of the maps have every resource so sometimes you find yourself farming older maps where you just can’t mine higher-grade resources and have an easy time on that map. It is true you can bring a certain amount of supplies to build those advance upgrades but once they are depleted that is it for those that fancy tech. 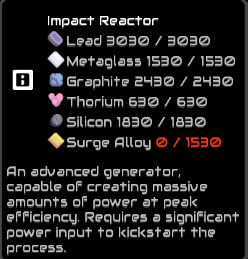 One of the things that makes this game really fun is it giving you purpose for repeating older maps if you like and chances are you still have something to gain for doing so. While it is true the higher maps have some of the rarer resources. More times than not you might find yourself lacking Silicon for some tech tree unlocks or another lower-tier material. As such any map that has sand as a resource can be a viable option to go and play so you can turn it into silicon for instance.

Outside of that, it is your typical branching out tech tree system. You unlock lower tier items to gain access to higher ones. The most interesting thing here is you don’t get to see the entire tree unless you have everything unlocked. So you really don’t know what kind of tech could be lurking behind upgrading the next item. You can make an educated guess if you are unlocking stuff around power generation other stuff will be related to that.

While I do wish there was a search function it’s not that hard to work out where the item you are missing could be on the tree. For the most part, it does have enough organization to it. I could see this being a bigger issue in the future if they add in hundreds of new items. 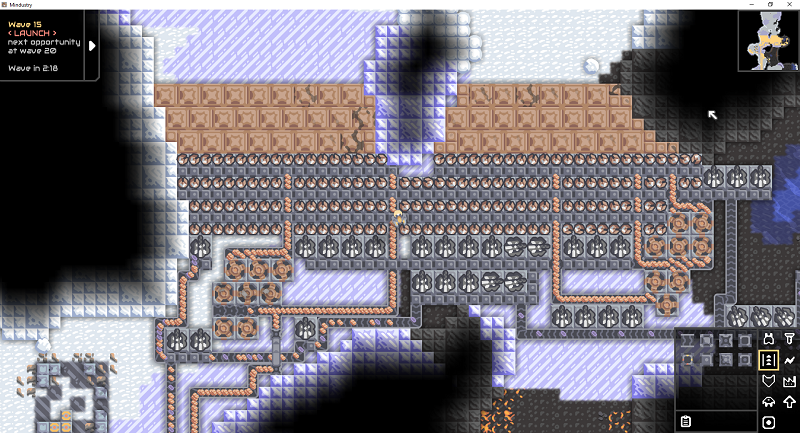 Once you get the hang of this game or a specific map it can feel a bit trivial at the lower level waves. I have some maps where I’ve made it up to wave 80 and felt like I could have kept going. Even more so if I had access to certain higher tier items that gave me quite the advantage.

I did have quite a few hours of fun. I was rather happy with the number of maps there are since it’s fun to go back and keep playing the same one over and over again. Even more so when you’re starting location and resources spawn in different areas sometimes. Some maps you just felt like you got a bad resource seed and that just increases the difficulty as you struggle not having enough of something.

This game is quite the bargain for only a couple of bucks on Steam.