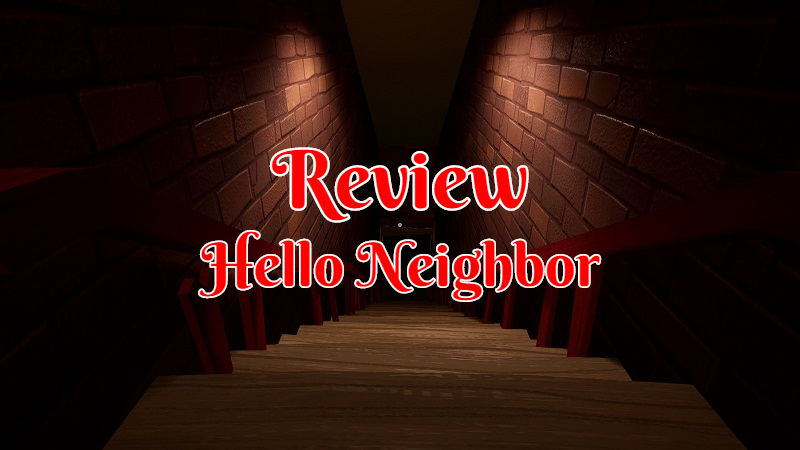 Hello Neighbor has a horror undertone to it where you are playing cat and mouse with the neighbor. The neighbor’s house is like a giant puzzle with clues, foreshadowing, and you getting chased while trying to solve it. The game likes to use a mix of different devices from locked doors to the sequential discovery of objects to move ahead.

Horror And The Chase While I’m not a fan of this kind of horror game I thought I would give it a try anyway as it seemed interested. You are playing as a kid in a small neighborhood and the neighbor is trying to hide something he does not want you to discover.

If you are not someone who enjoys playing a game more in a hide and sneak playstyle you will find this game frustrating. Many times when you are in the middle of setting up to solve a puzzle the neighbor discovers you and starts to chase. If he catches you several consequences could follow depending on how far you are in the game.

In the early stages if you are captured the neighbor just boots you outside and you find yourself in the street. You do have quite a fair amount of space to explore and try to peel back the sequential nature to get deeper into the house at that stage. The game does like to use music to indicate how close the neighbor is to your location. As a result, there are a lot of intense moments when you are just trying to complete what you think you need to do and the game bumps things up a notch.

There are also parts of the game where you do need to get captured to move forward from what I have experienced. This for a game that has the player playing a game of cat and mouse that does seem a bit counterintuitive until you realize it’s just another part of the games mechanic.

Sometimes it seems like the AI is set up to leave you alone. While other times it’s geared to follow closely and react when certain events take place. The neighbor can be trigger from sounds of traps going off, the sight from cameras set up throughout his house, and even him just wondering around looking.

Outside of these trigger points, the neighbor’s AI in several situations can be quite dumb. Several times during my play the neighbor got stuck on doors, walls, and other objects. At which point it just start lobbing green ooze that covered the screen making it hard to see.

The player at least gets quite a few hints when the neighbor has been tipped off to your location or is patrolling around the area. A clever player can sometimes use that to their advantage once they learn the behaviors of the neighbor.

While I would not say this game has a jump scare from the neighbor itself. It is his goal to find and catch you. With suspense music playing while that is going on. There are several ways to evade or even lose the neighbor if you are quick enough in thinking and are paying attention. 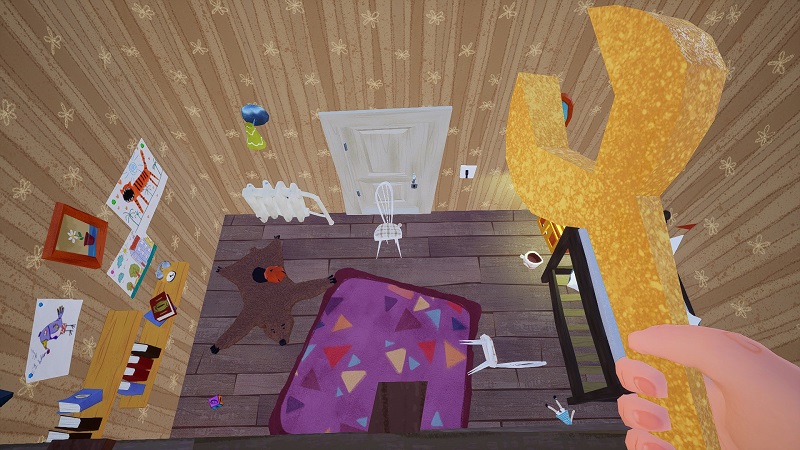 This game does have several different kinds of puzzles. Some are set up as sequential discovery. Others might involve some light parkour. Then you have stuff where it just feels like dumb luck got you through it. More times than not you need to keep your eyes peeled and take advantage of what you can pick up in the environment around you.

Sometimes the game will use a bit of foreshadowing by trying to hint to the player what they need to do with cuts scene. If you are someone who likes to skip over that kind of thing or ignores them you might find the sequential discovery puzzles to be challenging. As they can contain acquiring an object that allows you to even reach another object that then unlocks the location of another as it continues until you find the final item needed to move on. 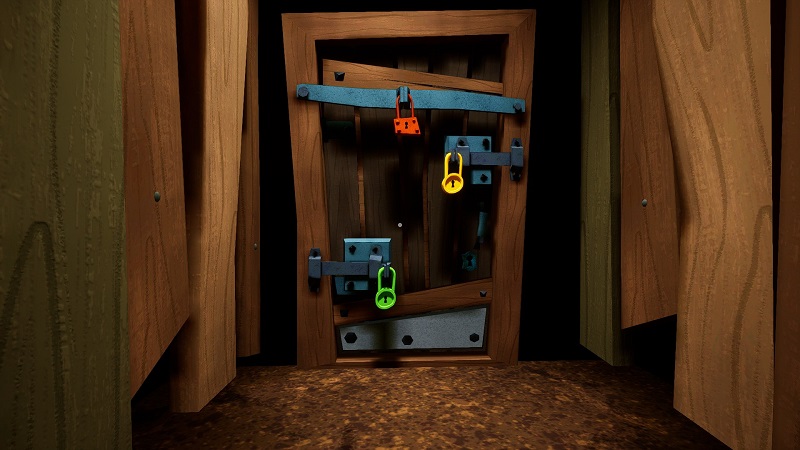 Some of the harder puzzles I found for me usually involved a locked door. Sometimes they would include a few locks on them and you would go on quite the hunt trying to find all the keys. Some parts of the game even felt like a bit of a maze with lots of doors, hallways, and rooms that you had to go through or gain access to in finding all the keys.

While I’m not a huge parkour fan a lot of times when elements of that were included they were quite easy to get through. The game’s environment is endlessly littered with boxes and other objects the player can pick up and aid them. This can often be a key component in getting through those kinds of challenges in the first place.

The game’s gravity with objects can get annoying at times to deal with. You might need to pile up a bunch of objects to get over something for instance to press a button. You could have stacked things up high and start to jump onto them. Then everything becomes unstable and those objects go jetting across the room in very odd behavior. 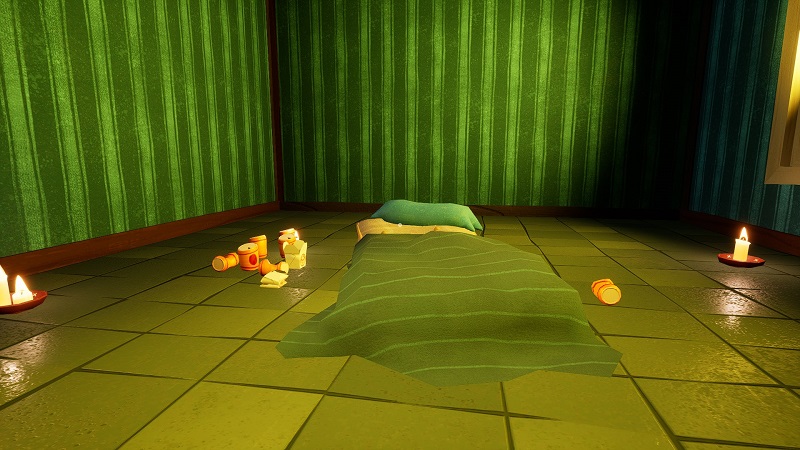 I also found there were just odd moments where you no longer had any idea how to advance or get out of a situation. So you just sat there doing whatever you could until whatever dumb thing you did worked. I feel these moments are there just to make you feel like a moron when something works out.

Many of these puzzles I found would be fun to solve if it was not for the fact I always felt rushed by the neighbor showing up and toss a wrench into things. Many times you are just trying to do things on the fly to get as far as you can before you are caught. For those who enjoy that kind of thrill this game should be right up your avenue. It was a cool game to check out and play for a while. It was however not one I finished. It seemed the, further along, I got the worse the kid I was playing was becoming in his overall appearance. As you can see in the screenshot above he has lost a shoe, his sock is torn, and there appears to be blood on his knees. Not long after that, there is bindings and blood on one of his hands and I was done.

From the foreshadowing in this game, it felt like there would be an interesting ending to witness for those that make it there. The journey to that ending for me was just not worth it. As it got a little too creepy in the end for me.

Screenshots were taken and content was written by @Enjar. Screenshots are from the game Hello Neighbor. If you are thinking about getting this game and are looking to support me further consider using my Epic Games creator code: enjargames at checkout or using this referral link to be sent to the store's pages.

Discloser: I received this game for free.