This War Of Mine is a survival game where you play as a group of everyday individuals trying to survive in a war-stricken area. You need to make moral decisions like helping or looting neighbors, murder, and many other harsh realities. Along the way you are defending your place against loots while trying to keep your small group of people alive as they need food, rest, and desire to live.

I found This War Of Mine to be quite an interesting take on survival. More times than not in these kinds of games you can build yourself and your group’s skills to the point you become badasses and nothing can stop you. This however was not the case. Your group was nothing that special and even just acquiring food and a knife can cause devastating reproductions if things go sideways. This War Of Mine has two defined time cycles. During the day you are at the house performing day to day actives. During the night you need to make choices like sending someone out looting, along with guarding against looters. Time was always something you wanted to make the most of it as the next day could be even harder.

There was always something to do during the daytime. This game has a fair amount of crafting in it if you happen to have the resources. If you did not go out during the night to get what you needed or a trader stops by you are really out of luck in getting things done in that department. So progress can sometimes feel slow.

Outside of trying to get crafting done for weapons, boarding up areas of the house, and upgrading crafting stations. A lot of the time you are gathering water, cooking food, and gathering from rat traps you have set up. Even with such a drive for gathering and making food that is something you often go without.

Every couple of days someone will show up at your place during the day. Most times they are a trader looking to exchange some goods. Things like alcohol, medical supplies, and cigarettes can be seen as valuable. Even to the point, you have maxed out the number of items per trade and still might not be getting the best deal as things like wood and components are not seen as high-value items. 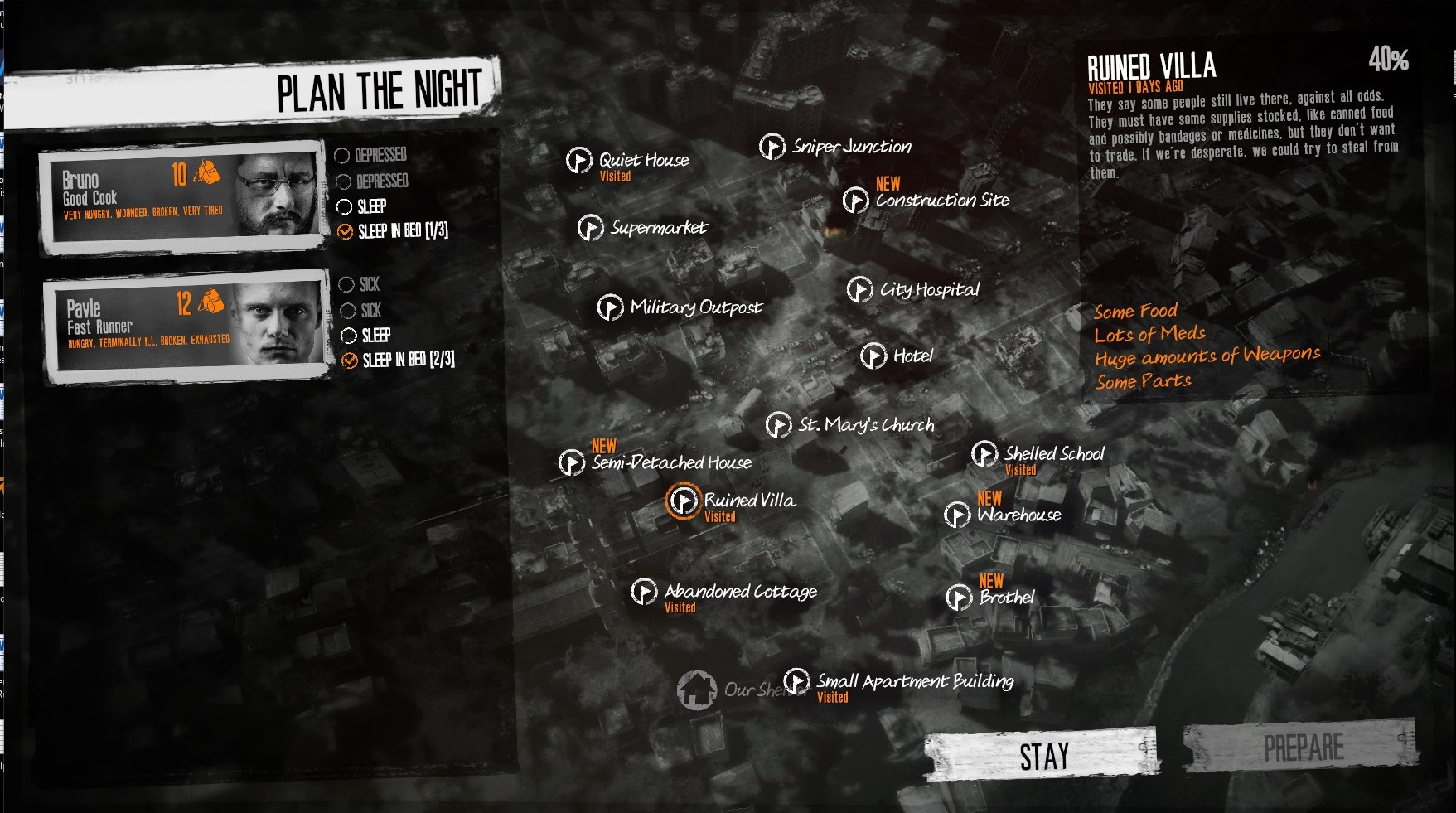 During the night is when you start taking risks. More times than not some of your group members will be wounded, ill, or externally tired. Trying to force them to do anything beyond just sleeping in a bed can cause them to get far worse over time. Sometimes you just don’t have a choice.

This is also the time when looters can show up to try and rob your place of supplies. In the early game, the biggest issue you face is a team member getting wounded. Later on, you can have a bunch of stuff stole or even people killed. If I can I usually leave someone on guard duty. 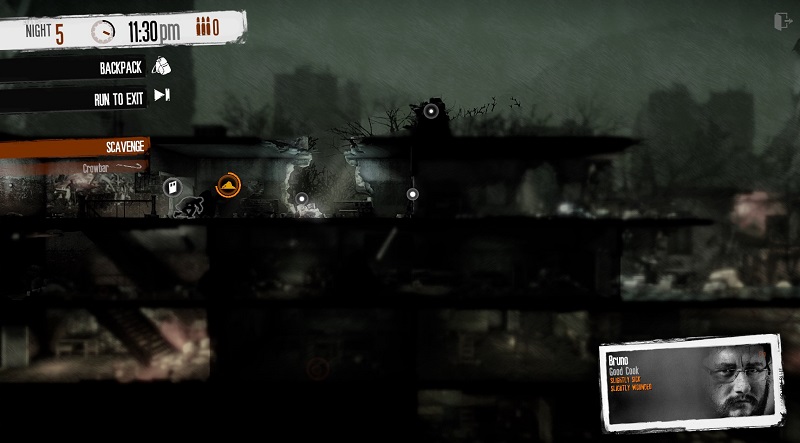 Finally, you can send someone out to scavenge. For me, this was the funniest part of the game. You get to go out playing as the character you select to loot a building you selected. Some of them have no one in them and are easy pickings. Some of the NPCs you run into could be friendly or even hostile was death if you were not prepared is most definitely going to be an outcome.

I found after a while being stuck in the house without enough supplies can get a little boring. You can’t carry a lot of supplies back in one trip so just to make some upgrades can take a few nights of looting. Looting is where I found the most fun in this game. This War Of Mine allows you to unlock and play as a few different groups of individuals. They all have their strengths though not anything I noticed that was overpowered. Like normal human beings, they also had their vices for coping that they now need to go without unless you can supply them.

Some of the individuals that could end up in your group would reduce the cost of performing certain actions. For instance, you could have a cook and your costs of preparing meals were slightly reduced such as saving on fuel if that character did the cooking.

Other characters might have a skill in bargaining where they can make better trades. This was quite useful when individuals would show up to your house every couple of days offering a wide range of wears. This was always great for buying the more bulky items like wood since the trades could carry a lot. You could also send your bargaining at night if you happened to know a location you could trade at if you needed something you could not find elsewhere.

Then you had the type of individuals that were more suited for going out and looting during the nights. They might just have a bigger pack back than other team members which come quite in handy. Since one of the main limiting factors, this game has the player deal with is limited stacking of items and bag space for your nightly looting trips with just a single individual.

During these hard times, each individual also deals with it in different ways. Someone might have been a smoker before wartime and if you can meet those demands they have a way to release stress. You just hope they smoke the homemade stuff and not the harder to come by store-bought. The store-bought is quite nice to have for trading as it is seen to be valuable.

I found it rather an interesting way for the game to balance out different positive traits with negative ones. Someone might play a critical role for you in one aspect; yet, come with a high expense of consuming a good that is worth a fair amount without your input in the matter. 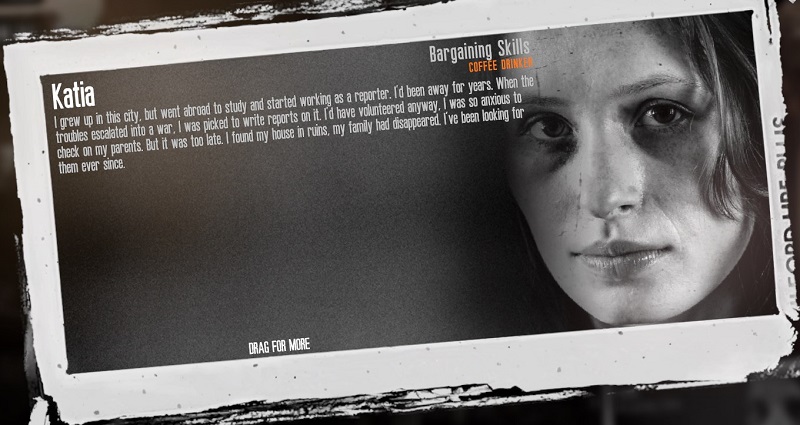 This War Of Mine puts a lot of focus on you need to maintain each character having just enough but not quietly satisfying a need. You have some food but never enough to fully keep them from going hungry. Someone can get sleep while others have to go without. Being too strict can cause the hardest of them all to manage depression.

When you start you have some food. After the first few nights out looting, you usually have a decent amount. This however tends to be short-lived. I often found myself only feeding my people every other day. This kept them from getting too hungry while usually giving me enough time to between catching rats in traps or looting more food to just stay ahead.

Sleep was the easiest to manage as long as an emergency was not going on. With having three to four individuals most of the time everyone got to sleep at least every other day. If I happened to fall behind I would just not send anyone out to go looting. I could also just have people resting up during the day.

The hardest thing I found to manage was depression. Even a fair amount of alcohol sometimes was not enough. While there are certain items in-game you can get to help deal with this. You might not be up to that state yet. Hitting the broken stage of depression caused that character to no longer be a functioning member of the team where you had to manually feed, talk, and help them out occupying the time of another team member during the day. Usually, by then it was too late and you were going lose them within a day or two.

All of these start to compound in difficulty in dealing with once you start losing team members. If someone gets killed or leaves everyone else gets depressed. It can be quite hard to recover and trying to fill all the roles you need with just one or two people remaining.

This part of the game ended up being the main restrictor in what you could do and slowed down progress. Someone becoming injured for example would require medical supplies and rest. This was both costly in supplies and lost opportunity in time as they stay bed rested. As a result, the survival aspects are really what makes this game hard. While each game can be rather short between a couple of hours to maybe ten depending on how things went. There was a lot of replayability between selecting different groups to play as or just wanting to get further in trying again. This War Of Mine also has a scenario mode and several DLCs to expand gameplay even further.

Screenshots were taken and content was written by @Enjar. Screenshots are from the game This War Of Mine. If you are thinking about getting this game and are looking to support me further consider using my Epic Games creator code: enjargames at checkout or using this referral link to be sent to the store's pages.

Discloser: I received this game for free.