While it was interesting running the storyline a lot slower than I tend to do in Path of Exile. It was time to hightail it and unlock the ability to run maps. There were however a couple more acts I had to get through first. With some fun side activities, I found myself getting involved.

Act eight feels like if you are willing to skip over some things you can save yourself quite some time. While sure I’ll be going back for it later. For now not messing around in an area that could add an extra thirty minutes or longer to my time spent is a plus. You might notice once I was in act 8 that I have two zones that are still shown as not explored. I more or less just take a left path and rush though a few zones picking up a couple of pieces required to activate the boss fight.

I could not even be bothered to pick up the teleport in one of the zones I quickly went into and then back out of. I did not need to go into the Imperial Fields I just always overshot finding the stairs down to the second level in the Solaris Temple. Act 8 also has the Bath House zone where you can get quite a few things done at once. It connects to several different zones as well. I had like four quests turned in for rewards to make in quite a short amount of time. In Act 8 the boss fight includes two entities. Solaris and Lunar are representing the sun and moon. In some phases, you are facing both of them and others just one at a time. They switch back and forth before you end up killing them both and get a door that opens to move to act 9. In act 9 you start in The Blood Aqueduct. This is quite a famous spot for many to grind for hours or even days. As many want the Humility card drop that you can get in here that you can turn in for a Tabula Rasa.

If I was playing in solo self-found I would for sure stop and spend a few hours in The Blood Aqueduct. Having a 6-link chest right about now would have been amazing. I however believe I can do other things in the game to earn enough to just buy one from another player. They are however a bit more pricy it seems than the last league for where we are in the league in terms of time. Act 9 is another act that seems to go by quite quickly. I could have skipped over some of the god fights and many other things. They are not that out of the way that I might as well save myself time in having to re-run back to pick them up later. I did stop for a bit to play around with the Sentinel controller. Since you can change them at will and don’t have to pay anything to remove them. I thought I would try and better understand the madness. I’m still not quite sure which nodes I even want to go for.

I’m also still running on just using the one type. I will more than likely unlock the one for unique and rare monsters next. My build should be able to handle those without much of an issue. It would be great if I could get a few extra maps to drop off later on for having it unlocked. I however won’t know till later The biggest part of act 9 has to go through three different recurring nightmare zones. This is where at the end of each of them you fight a mini-boss. They are usually quite easy fights to take down. I sometimes have a harder time clearing the encounters due to all the area of effects and monster density than I do with these fights them. The act 9 boss The Depraved Trinity for me a least was a total pushover. Sure there are a bunch of different effects you have to avoid. That is usually easy to do and when you can’t a lot of the stuff going on is not doing a lot of damage if you have decent resistance.

Once I made it into act 10 I decided I’d skip over a lot of the optional stuff for the time being. I’d come back the next day and finish them off. For now, it was time to be done with this madness and quickly get to the final boss. One of the things I could not skip over was fighting Avarius again as the Reassembled. This fight can be a good indicator of how rough fighting Kitava was going to be for finishing off act 10. I had a feeling I was a bit doomed.

I was somehow four levels behind at this time. Even when I’m trying to be a few levels behind for the better experience gains I’m not usually that behind. It was tempting to just fail the Avarius fight and clear out the zone before it a dozen or so times over. Very quickly afterward I was facing Kitava for the final time. This fight was brutal. Thankfully I used totems for my damage so once I had four of them down I could just get out of the way of attacks that could kill me.

I was somewhat expecting to die a few dozen times if need be just to finish this fight off. Thankfully it was only six times. I always put up a portal just outside of the zone just in case I miss-click when on the death screen to portal back to town.

Nothing more annoying than having to rerun all the zones to get back to Kitava. Only for it to have reset the boss instance if you don’t make it back in time. I’ve done that in the past. A mistake I’ve yet to make ever again by having a portal up. Once Kitava is dead you take another permanent resistance penalty. -60% to all resistance you start to feel that pain early on in maps. Thankfully I had kept some resistance in my passive skill tree instead of reallocating those points elsewhere. Otherwise, I would feel that pain. 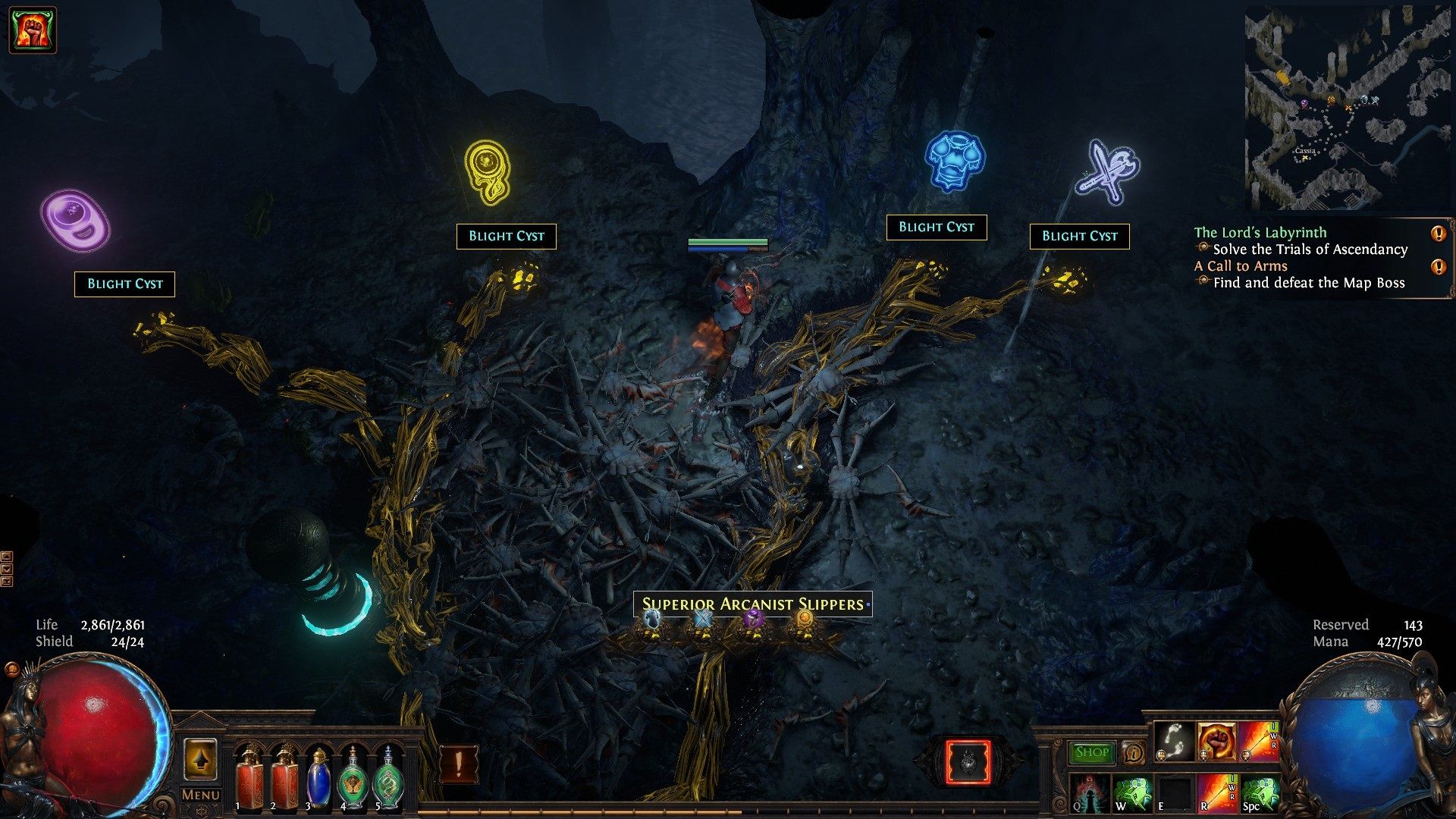 After that, it was finally time to unlock maps and enjoy the part of the game I love the most. On the first map I got I had a blight encounter. Since I needed that NPC to anoint items later on I made sure to run it. Otherwise, I would usually just run past them. 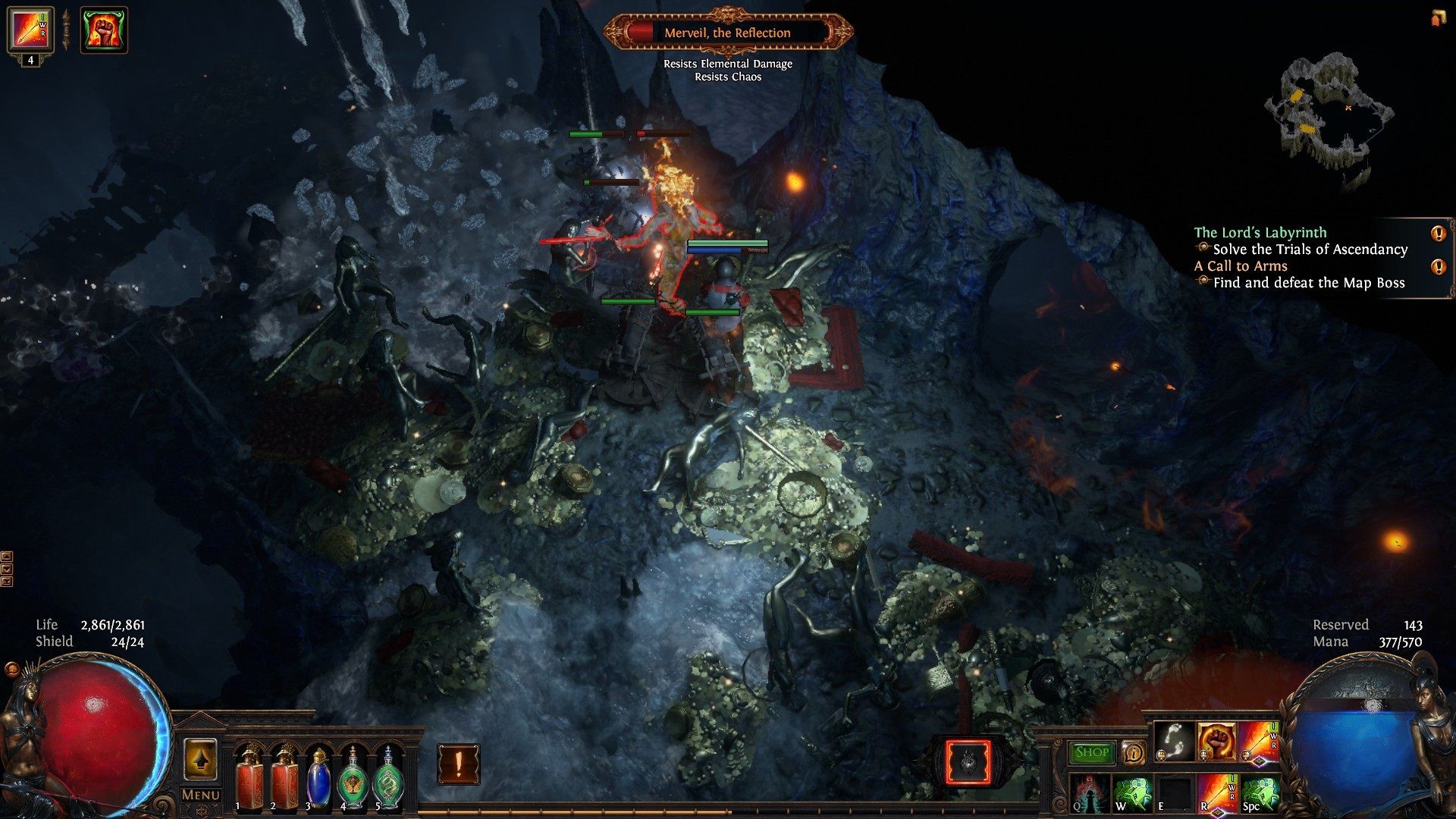 The map the game gave me ended up being a double boss of Merveil. While there are a lot of double boss encounters I think I could do even at my level of gear this was not one of them. Thankfully I had looted some other maps along the way. So I went back in with another map and this time I killed Merveil for my first map clear. All I have left to do is run back and finish off anything that I skipped over. Even if it does not reward a passive skill point I’ll more than likely run it. I hate popping into an act and seeing I have unfished business in there. I also need to do some lower-level lab runs and quite a few other things.