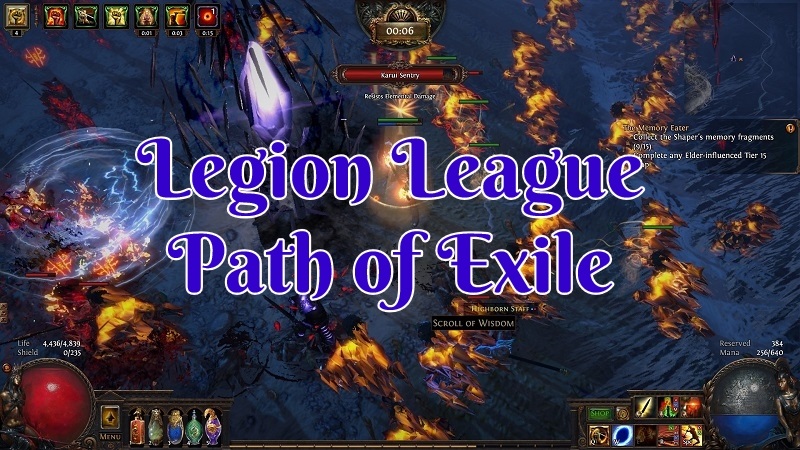 Every couple of months Path of Exile has a new league and in typical fashion, I have been playing it for several weeks now. Usually, my overviews are quite deep as there tends to be a lot to talk about in regards to the league mechanics itself. This time there just not much to say it’s not that great for the solo player not playing max speed max clear builds.

While there was an entire melee rebalance and a lot of changes to that playstyle. That's not really league mechanics and as someone playing a melee this league they were not so great for farming, in general, this league from what I have played. It’s like they did all this work and there was so much hype to play Cyclone and it’s not really made for this kind of thing at least at my level.

These are going be the bread and butter for most players in this league. Every map is going to have a single one and you need to activate them to start.

Once you click on them you have 15 seconds to break open which monsters you want to fight. Monsters spawn in a massive circle (terrain have an impact on the actual shape in most cases) around the Timeless Monolith itself. Some monsters will have icons above their heads to indicate what kind of loot they could drop.

I feel a lot of builds are going to struggle with the 15-second timer. While you're you don’t need to fully clear everything it can be hard to move around the trapped monsters in the first place. As someone who was playing cyclone, I found it easier to just use my main skill than my movement skill leap slam since it was having some issues.

Even once you have broken open the Legion you want to fight you can’t just sit around all day either before killing them. They will attach each other since they are in a war with each other. A result, you could lose out on getting loot. I sometimes would wait a moment before leaping in just to reduce my chance of getting killed right away. You start to learn after a while some of them are not worth breaking open as they can just wreck you.

For the most part, the icons showed above the monsters are rather easy for the player to guess what they drop so I don’t see a need to go into great detail. Chaos Orb icon drops currency, weapons drop weapons, ring icon drops jewelry and so on. Even once you find something you are unsure of like fossil drops its rather easy to learn by doing.

There are also chest icons and that is where the bulk of your splinters to make Emblem tend to come from. Each chest was netting me four to seven splinters. 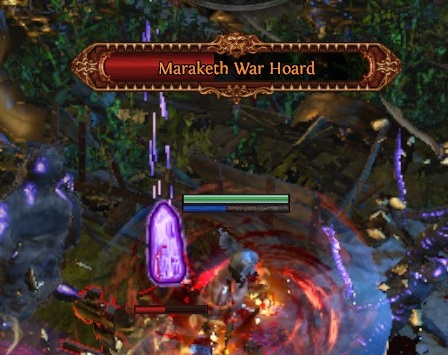 These can drop from the icon above and are Legion specific only drops. They are a consumable one-time item you can attach to your gear. After an X amount of monsters are killed they drop an item out of the category they have listed.

There are many dozens of different types of Incubators. They can drop everything from currency, unique items, elder items, fossils, helmets with enchants (shame they did not just drop the enchant and allow you to put it on whatever helmet you like) and so forth.

Since they do get consumed on use and many players choose to try their luck on getting something great many are still at least a couple of chaos. If I get something like Thaumaturge's I just sell them since people who want to gamble getting a decently high level corrupted gem are willing to pay 9 Chaos each I rather have the Chaos. 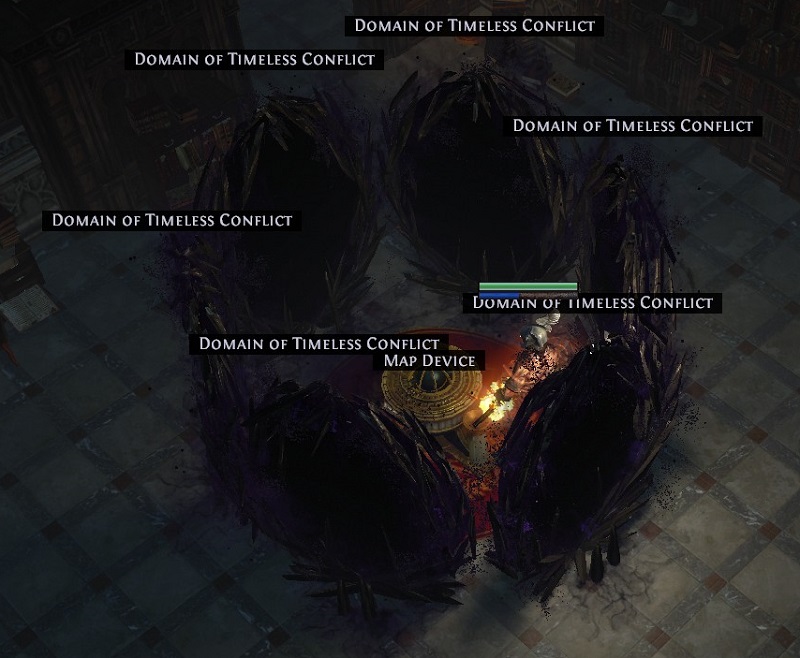 Legions themselves can drop splinters and one hundred of them make an Emblem. From there you can choose how many you want to be run with between 2 to 5 Emblems. You can’t have duplicates so the cost of running more increase as you needs to buy the rarer ones. Each additional Emblem adds a minute on the timer and increases spawn density.

The whole goal of these is to run them as fast as possible killing only monsters with icons above their heads which follows how legion works for what loot can drop. At the end of your time, the loot spawns all in the middle for you to collect.

Everything else gives nothing. So there no point in killing trash and if you run into something that takes too long to kill it’s best to just skip it. Once you have cleared what you wanted you run up to the center again and wait a few seconds for fresh round to spawn. At least you don’t have to kill everything. 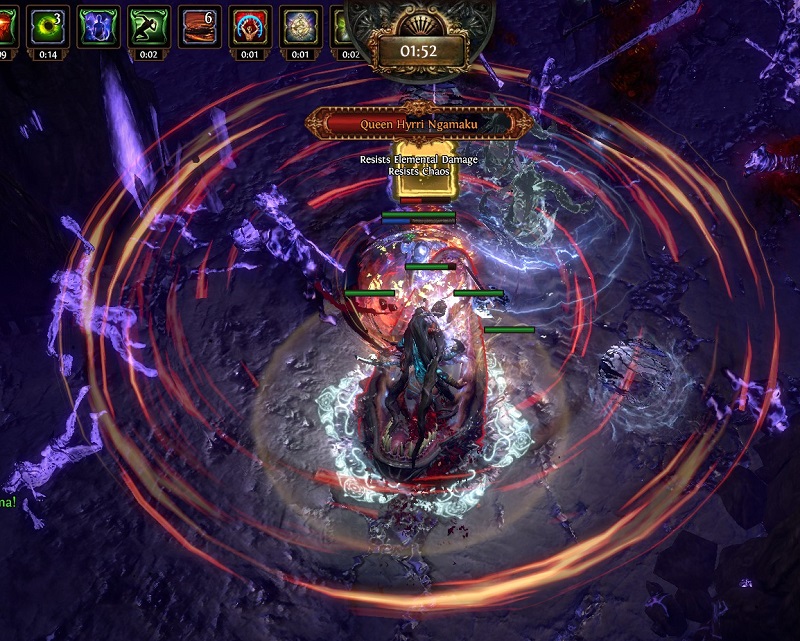 Generals also appear throughout the different rounds which are the harder to kill and can really slow you down if you lack the ability to burst to kill them. They are expected to have better loot that can drop. What you exactly get from them you really never get to know since it all drops at the end.

As you are killing more and more monsters with icons you are building up your loot which gets displayed in rows at on your screen. This part I really loved as you could really see how well or not you were doing. You could also get an idea from the icons you were collecting what kind of loot you could expect to see. 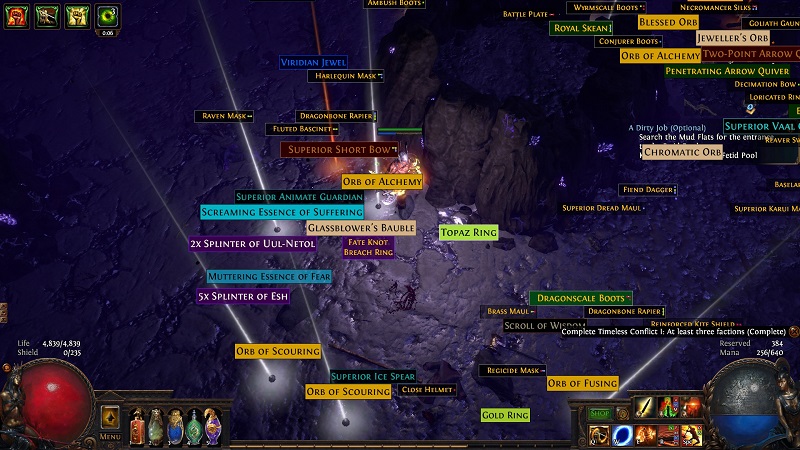 In the end, I was spending around 30+ Chaos Orbs to buy Eternal, Karui, and Vaal Emblem for a single run. As you can see from my drops I got maybe a couple of Chaos and that’s about how it went playing as a solo Cyclone build. While it’s true you could get Exalt. The Timeless Jewel market has crashed heavy so even if you somehow were a lucky one to get one to drop that’s not getting you out of the hole either.

While I could have tried running more than three the costs started to go up quite a lot. On top of that to be able to even run a five Emblem map you needed to run a four one first to unlock the extra slot in the atlas. Which I just did not need to do. Since I had no plans to spend 130 Chaos or more for a Maraketh Emblem let alone 45 on a Templar. At least for those farming the shards can make some decent money from that.

The biggest issue here is because it takes 100 shards to make an Emblem and you need a few of them you are going have to buy them from other players. While there is an upper cap on loot all but the top players will be able to reach it. Those same top players can also run five Emblem maps in their group and get a much higher ROI than most. So they can buy up at a higher price and still turn a profit. Thus, pushing out slower and cheaper builds and groups that will lose money every time.

What looked like a lot of fun in practice is just boring unless you want to create a special build just for running these. That’s not out of the ordinary for players to do so as many are playing ranged to clear these. It’s just a shame most won’t get much of a thrill on whatever build they went with. As you need a very fast clear speed and the bankroll to withstand some bad rng over a long amount of time. 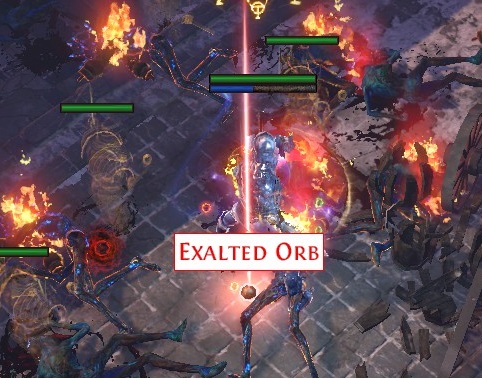 If nothing else this shall be known for the league of exalts. They have been raining from the skies and I sure have benefited from getting a few of them myself. This has to be at least double what I got the last league and I’m playing this one less. 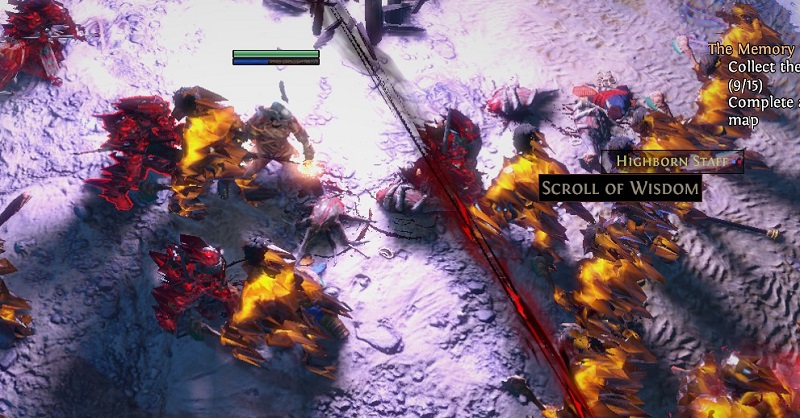 I had some fun but I’m more than likely going call it here for myself. I don’t see myself running hundreds of Emblems or spending the next week to get a different build up to the level to see how that goes profitability wise. Quite a lot of value has already been lost due to the one percent being able to farm this league like crazy.

There is still some fun to be had elsewhere and who knows they might keep messing with the numbers to find the right balance. While leagues can be great sometimes it takes a while for the developer to find a balance that works for most players. They seem to be strong in keeping the meta of need to have a fast build.