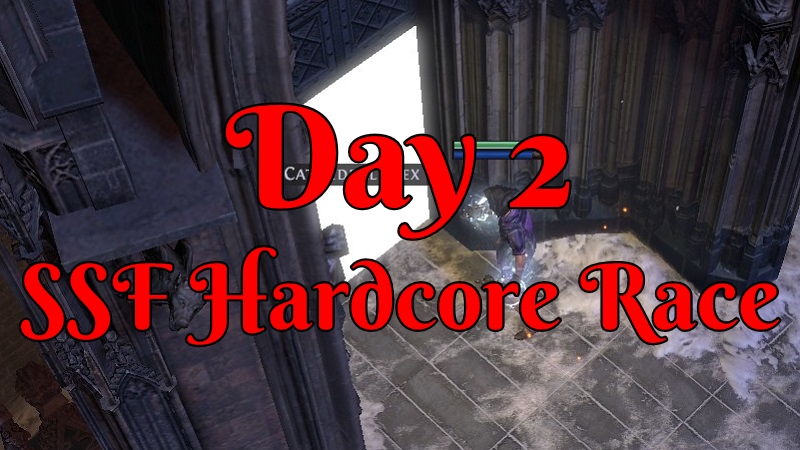 Overall day two went much better than day 1. After some joking around and “borrowing”, a new name that was given to my new character dubbed SHR_CocaColagontakemyw towards the end of day 1 for myself. He has yet to have any sudden deaths which could be blamed on CocaCola! Still, I won’t be to surprise if it does happen.

After looking at what every else is up to. It appears CocaCola has arrived at the party by another name. Deck out in some amazing looted must been sponsored (joking, I know that stuff takes forever to farm). He managed to find a Tabula and is running my skill set up with the exception of having a 6 link instead of just the 3 links I have. On top of that, he has a hideout unlocked for crafting mods onto this gear. Which I’m still lacking to unlock.

For whatever reason, I just don’t run into the forsaken masters much in my own progression of things. I’ve been doing some clearing in higher level zones hoping to find the one I need a couple of times to fill some massive gaps I have in my resistance.

For the better part of day 2, everything I crafted or looted had cold resistance but nothing else on it. At one point I had over 100 cold resistances with the cap being 75 I did not care too much for it. At the end of day 2, I have traded out some of it to at least get fire up to 68%. Sadly Lighting is still far below only 59% which has almost killed me a few times now when I’ve run into something trying to burn me alive.

I spent a fair amount of my Orbs of Alteration, Orbs of Fusing, Orbs of Scouring, and even some Chaos Orbs trying to make some better gear. It was more or less whatever currency I had laying around. Along with anything I looted or found on a vendor that I think I could make work. I am at least now running a few gem setups unlike day 1.

One of my better-crafted items this time around. I socket Shield charged with Fortify and Faster Attack is always nice for movement. The item itself also has some decent life and some resistance rolls.

My attempts at making a decent body armor have failed quite a number of times. At this time I’m just running whatever I looted that fitted the bill for that slot. I just did not have enough currency to keep rolling a chest I was working on. No luck getting some life with one of the two resistances I was really missing. Let alone make it a 4-link. Maybe day 3 will be my day!

I even spent all my silver coins on prophecies and at least got some return on that from currency drops. 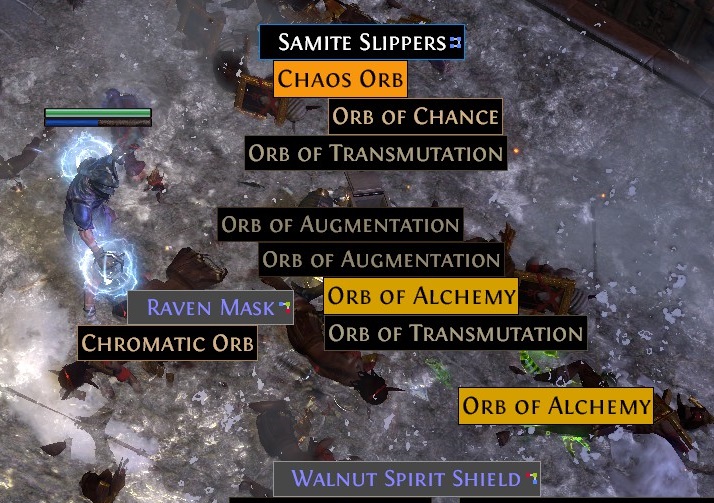 I have also been very risk-taking and opening up some chests I find. At this point, I need gear upgrades and currency. Even if it means getting killed in the process. I know there only so much time left to make a move or be stuck. So far I had some luck with currency drops as seen in the screenshot.

I have even resorted to trying to do the Alchemy recipe. I really don’t recommend it unless you are playing solo self-found. I have a bank tab full of a bunch of yellows and not much to show for it. 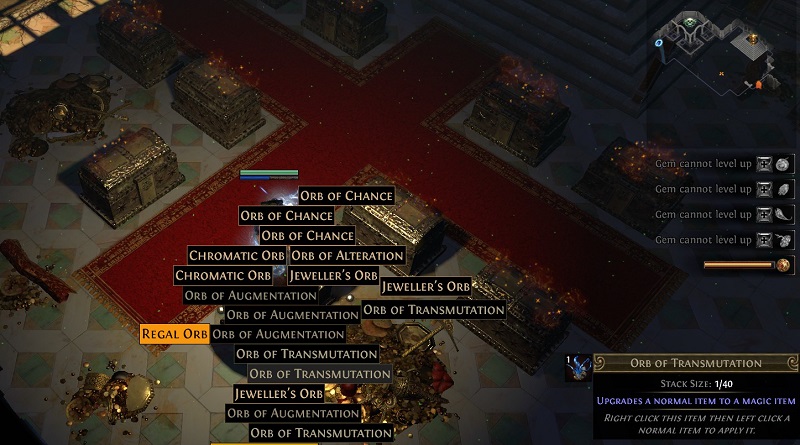 Most times I always wait far too long to think about running this and unlock my assentation class. Since the first skill allows me to drop another totem it really was a must have. Along with the other skill I have I can get out 3 of them at a time instead of just one. Which is quite a nice damage increase from what I had.

I’ve run the Labyrinth at this point while playing this game. It really is a cakewalk as long as you have enough life, resistance, and damage to get it done. No longer do I panic and make a very bad choice that results in my death at least on the normal one. Instead of trying my luck I just slow down and take my time. However, not too long of a time that gets me killed as well.

All of this leads me to that point in the game where I have had a lot of deaths moving forward into and from that point. Cover screenshot of this post even illustrates that point of no return. Everything has been a build up to that point. A point where I’m more than likely going have to face on Day 3 when I find some time in the remaining few hours we remaining.

I have clicked on the door once so far. I ported out just in time on the first attempt. I was missing some life it seems and I already know I have some resistance gaps I been trying to plug up for a day now. That encounter is always so heart pounding. Hardcore can have its tolls!

I hope everyone else is having an amazing time. I have some hard and risky choices to take very soon. Have a great final day!