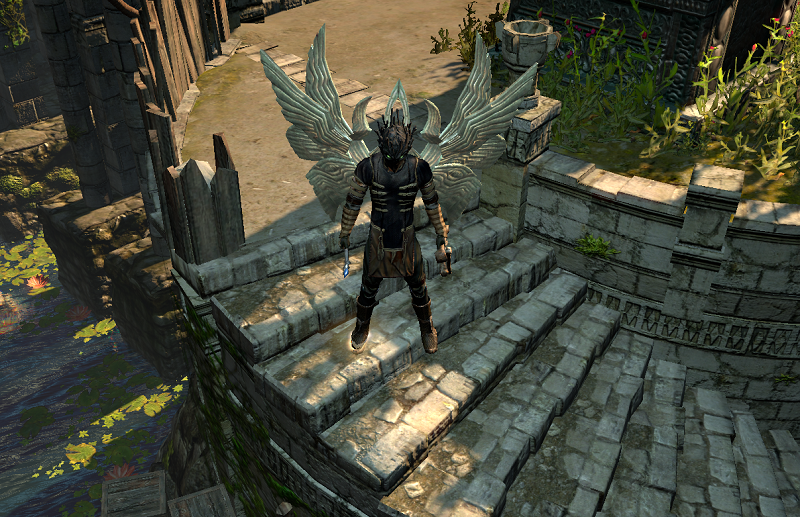 So far I have taken things extra slow. Since playing hardcore is something that is rather new to me I rather spend the time and not have to start over again if it can help.

League start I always forget to grab a screenshot of me sitting in the queue! After getting the patch out of the way I was 10,040th in the login queue. Not too bad for being an hour and a half early!

I did spend some time checking out the new stuff and sightseeing. While everyone is rushing to their deaths I listen to the lore text and even visited some of the new stuff to see what was up. I have even captured a few beasts along the way. I need more nets! I have yet to sacrifice any of the Blood Alter for items since I had a feeling I would get flattened like a pancake with how bad my gear has been. 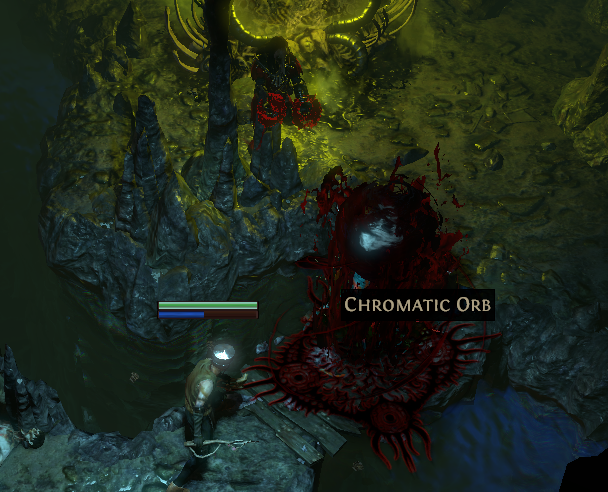 My first capture and I am really digging that portal effect when the guy comes in to collect it. You can’t see it well in this screenshot but it is amazing! 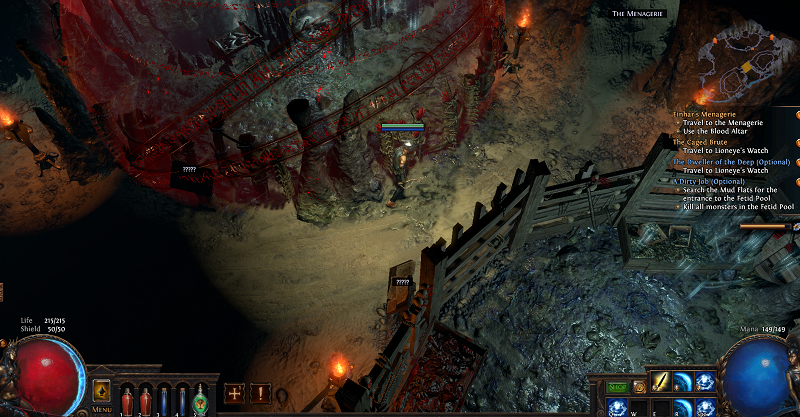 Two of the cages in one of the side areas in Menagerie where all my captures will be held for this league. 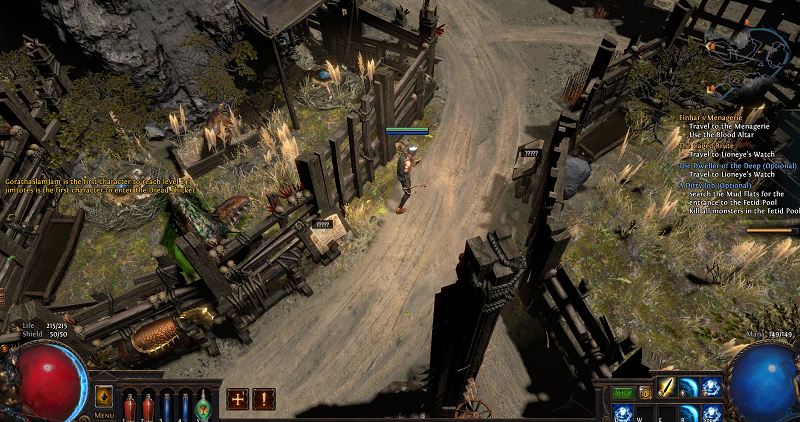 There are several different holding areas and one cage have some of the beasts I have captured so far. They are all very low level but I just wanted to start collecting them. Not that this brings back ANY childhood memories of me wanting to capture every SINGLE thing I come across. Shame I cant use them to battle others beasts.

How I Love Spike Traps 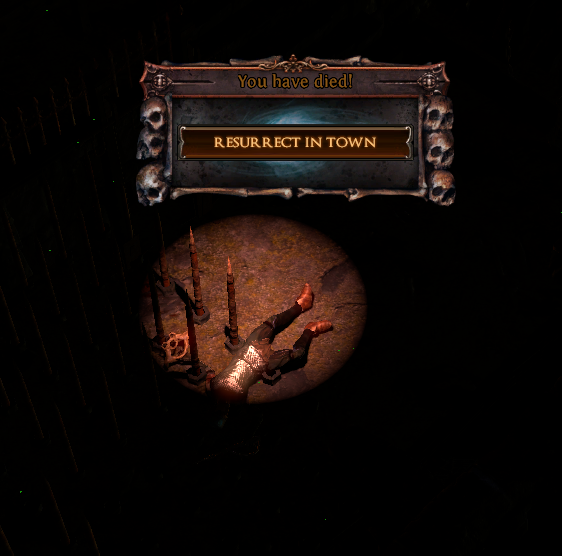 During leagues, I always skip over doing the puzzles that are required to unlock the Labyrinth till later on where I go back and do this. Every time I just feel silly about how much time I’m wasting having to run back to each one when I could have done them when I find them. This time I ask myself “when was the last time I died to spike trap in one of these.” While it was not last season I can say that streak has come to an end and my first death!

I have been going very slow not even being under leveled by three or four levels like I would in softcore. When I got to the end of Act II’s boss I noticed my damage was not going be enough for this fight. I even tried to force it a little bit but it went really bad. I at least escaped that round alive.

So I went back a couple of zones and did some farming to try and replace my gear with both drops and some crafting. Seem a little strange to have to be crafting already at this level but I just want to move forward without having to start over again. So I felt some time invested was worth trying. 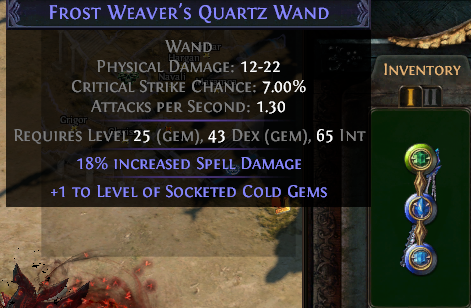 Up to this point I was running with my main skill just with 1 other gem. Freezing Pulse with Added Cold Damage. Before I make the switch over to my final build skill I’ve never really had great plans and I just pushed forward in the past in softcore. This time around I added Faster Casting (I really should have done that sooner), and vender recipe a magic wand to have +1 to socked cold gems.

It’s really not ideal at all but hey in a couple of levels I’ll be making a switch over to Glacial cascade on my shadow.

I'm used to my chest being my worst slot since that tends to be where I hold my main skill. Why did I run so long on such a bad item? Well, I was hoping for a better link so I could use another skill. I did see faster casting speed on one vender when checking what skills I could use and was happy to switch this over to my wand.

This chest not being very good was at least better than one I had been holding. In hopes of upgrading into by making it a two or three link. Thankfully I did not need to do that!

For the boss fight, I did loot this ring and I even tried to roll it a couple of times. I ended up just sticking with life since I did not want invest too much and I did not have much to spend rerolling anyway. 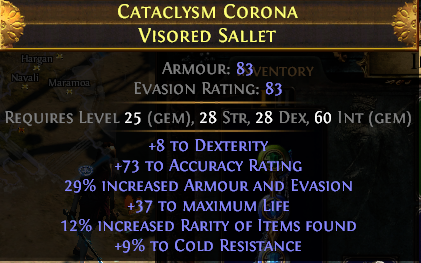 I also found this while leveling up more for the boss fight. It had life and some cold resistance which I was looking for. It was also much better then whatever junk helm I was wearing I think only had some life in it.

I also reroll some socket colors to move my gems around to fit into my new gear. 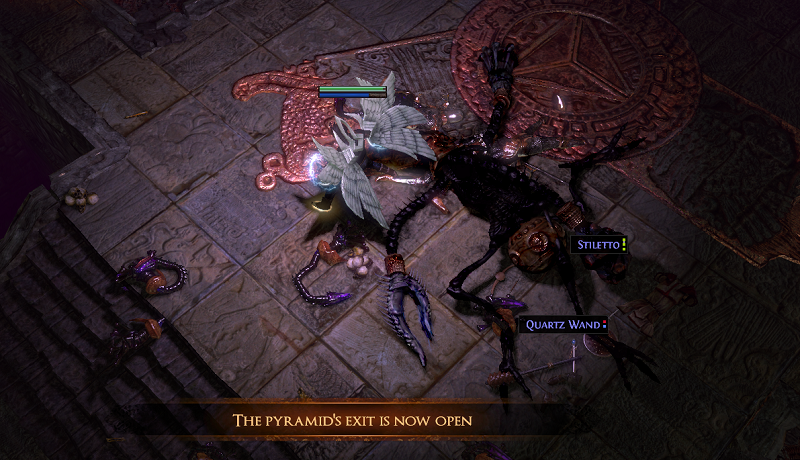 I ended up more than doubling my damage and instead of having to evade every single attack this time I was able to even face tank some of it so I could get more damage out since I crafted some bigger flasks that had double the healing amount.

My second shadow made it to level 26 and it resting with none of the third act started. It took me longer than expected to get to that point and I elected to get some sleep and work on some other things before I go back tonight and press onward. My first guy only made it to level 9. Some say he just wanted to die because who dies to spikes I mean really!

For those who don’t play this game once your hardcore league character dies it gets moved to softcore standard . I’ve only log into standard league in last year to manage my bank space! Who even plays standard when new leagues are so much fun!!!! 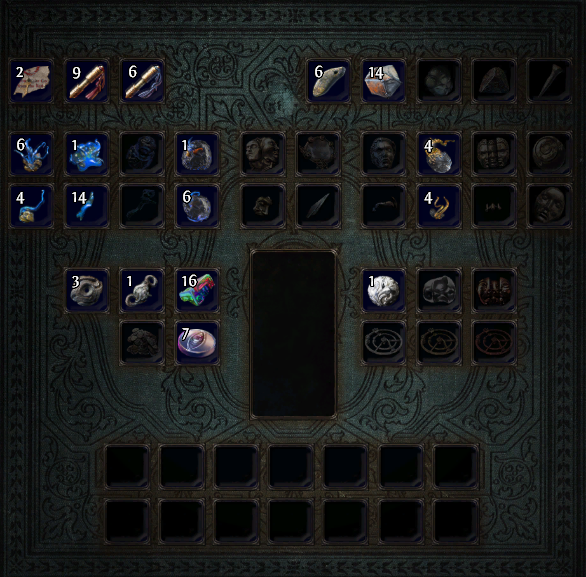 My total end of the day currency count. Nothing really amazing drop as of yet. I did open a chest that drops 4 silver coins which were an ok find.

Screenshots taken and content written by @enjar. Recap of my day 1 for Poecomp.

Looking for more Path of Exile content? Check it out at my new site Enjar Games | Path Of Exile