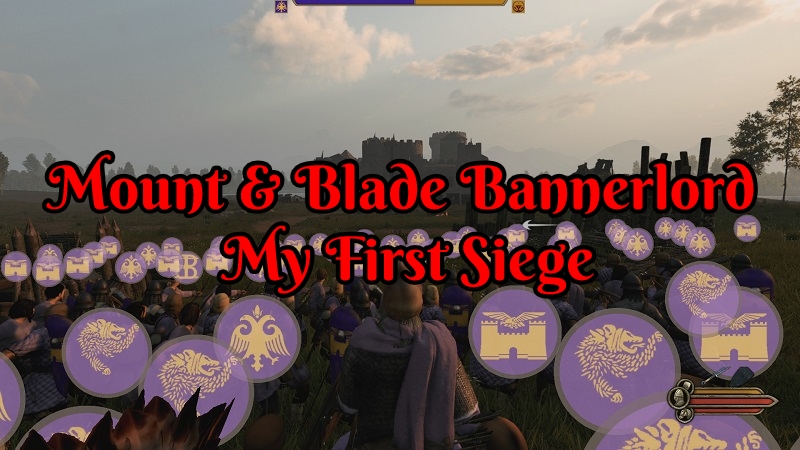 My first town siege in Mount & Blade II: Bannerlord went off without a hitch the second time around. It was one for the record books of epic proportions. Let’s just say some things still need to be added or improved on in early access.

I am part of the Southern Empire. I know it’s quite an original name I’m not the ruler of it so I can’t change it to something equally as bad. Right around when I joined them a war broke out with the Aserai kingdom. No idea who started what or why. It’s just how things been since I joined.

We have been kicking some butt and Aserai has been losing a lot of castles, villages, and now a town because of it. While I only have an army of thirty men I thought I would join in on this fun. A large amount of the rulers of the kingdom were going to the next siege and this time it was for a town. It would be fun they said. I would get lots of phat loot they said. It was something else that is for sure.

I had not even sieged a castle yet let alone a town. The best I’ve done by now was help out pillaging a village with another army. This is where I discovered one of my companions was not so thrilled by attacking villages. Blast! I’ll have to dump them off at some tavern when I can before I go on a massive plundering adventure. I arrived at the Husn Fulq town which I cannot pronounce and trying to type it ten times fast is a nightmare. It’s on the south-east edge of the map. Don’t mind it’s already green and owned by the Southern Empire. I’m just good at foreshadowing and not lazy and forgot to take a screenshot beforehand.

All I had to do was join the party and sit back for an easy victory. Perhaps I’d send my men ahead on the siege; meanwhile, I hide behind a barrier and make myself know once victory was guaranteed. Nothing more than that was expected of me anyway and I should have just done that. I stayed behind and sent my men into battle for me.

That, however, is not what I did. I wanted to siege and so I jumped into the action. My kingdom is stupid and did not even prepare to siege a town. Maybe they thought the front gate would just be opened magically for them and they would be declared the winners. Well, not this time around. Once I got into the battle my adrenaline was pumping so you can kiss any hiding out the window. I rushed forward with the other men charging towards the town. I had hoped the leadership had some amazing plan for taking this place over.

We arrived at the front gate with our swords in hand and that was all. We didn’t have a single battering ram. No towers built to get over the walls. They all just stood there looking at the gate while trying to kill anyone shooting at them from the towers.

The enemies themselves did not seem to care. They must have been drinking or something as they could not hit a single person with an arrow despite how clustered we were around the front gate. Perhaps they were aware of something I was not.

I did the most logical thing I could think of. Since I was out of range of meleeing the front gate I shot my entire quiver of arrows into it. I caused a total of forty or so damage to the gate not even putting a scratch on it. Meanwhile, everyone still just stood around doing nothing.

After quite a while of each side maybe taking one or two lives. It was starting to turn into a lame siege at that. I thought perhaps I had missed something important that I was somehow supposed to take care of. This is my first siege after all.

I ran all around the battlefield dodging arrows left and right. I found nothing around the area we started in that even hinted at some kind of ram being built or anything else that could be used to destroy or get over the walls.

After some time I ran around the outer edge of the town. Hoping beyond hope there was something, a clue, anything in what I am supposed to do. At this point, I’m covered in mud and anything else the town has been dumping over the town walls into their moat. It appears someone placed two sets of ladders on each side. Why has no one lifted them up and into place? I have no idea. Perhaps that was my role and I was just to dunk to recall. So I did the only thing a responsible person would do. I lifted them into place all on my own. No one came to help.

As soon as the first ladder was in place the entire army rushed in and pushed me out of the way. I guess I was not going to be the first one to get into the town after all. I suspected the first few in were rushing to their deaths so I was not in a hurry anyway. I continued running around getting all the other ladders in place. Our men were getting slaughtered by the dozens. It must have been a real blood bath up there. For whatever reason, we were not getting a single kill. Perhaps the leaders of our kingdom commended the fodder to go first and they still dint know which end of the sword to use. 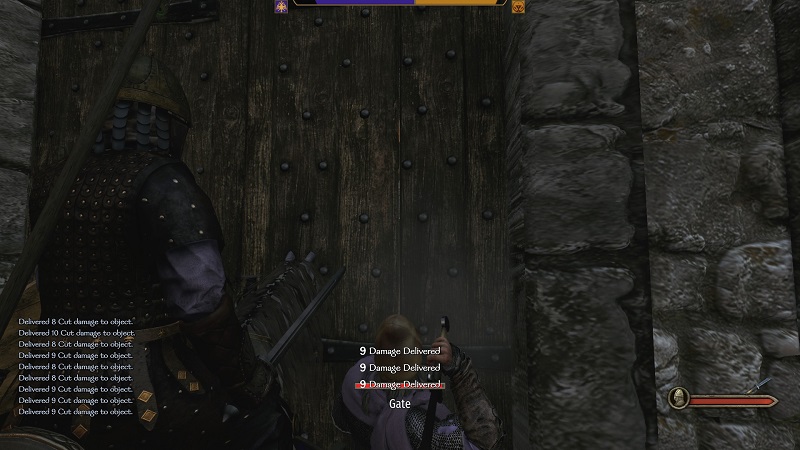 While I’m waiting for everyone to get up the ladders I notice all our men have run away from the front gate. So I stood there hacking away at it with my sword for at least ten minutes. I make a dent but nothing more. It would take hours if not days of me trying to break the front gate to get in. 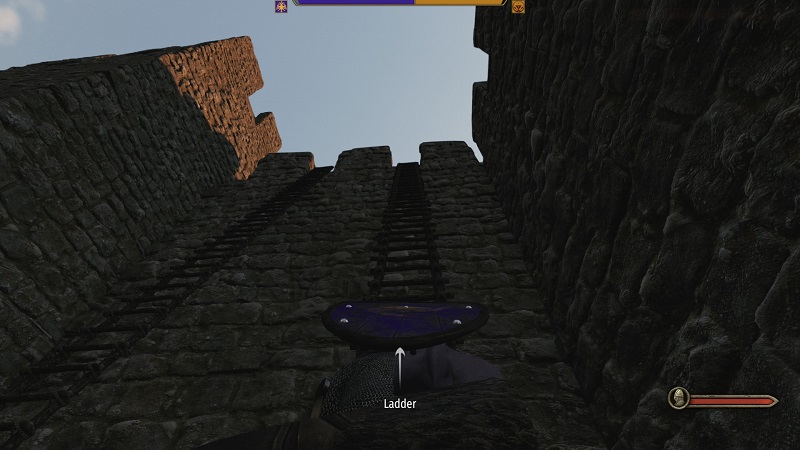 Finally, there is some room on the ladders so I take the opportunity to climb up one. I get to the top of the ladder and I can’t go anywhere else. There appears to be an invisible wall! Perhaps this side is just bugged so I run to the other side. This took a while to travel through all of the muck for the tenth time by now! This siege has been going for almost half an hour now.

It is only when I got onto the other ladder that I noticed all our men were on the roof of a platform! They were not willing to move to engage the enemies and that is why so many of them have been getting killed. I thought I would take the first leap of faith down off the roof. I would then command at least my men if they were still alive to follow after me. I was sent plummeting off the roof to my death!

So, I wait a bit longer hoping the siege would resolve itself. It did not and it’s clear at least this one was bugged. As fortune would have it I created a fresh game save before joining this siege. Bannerlord is in early access after all so one cannot be too safe.

Attempt Two In Sieging A Town This time I decided to be super lazy. There is an option to send your men into battle while you remain behind. Sure enough, they were able to win without me. I was holding them all back!

Who do I owe this easy win to? Well, our leader of course. Her name is Rhagaea.

Have you seen her before? Neither have I unless I was drunk the first night. I needed to pelage my allegiance to this tactical mastermind to move up in this kingdom as a vessel. 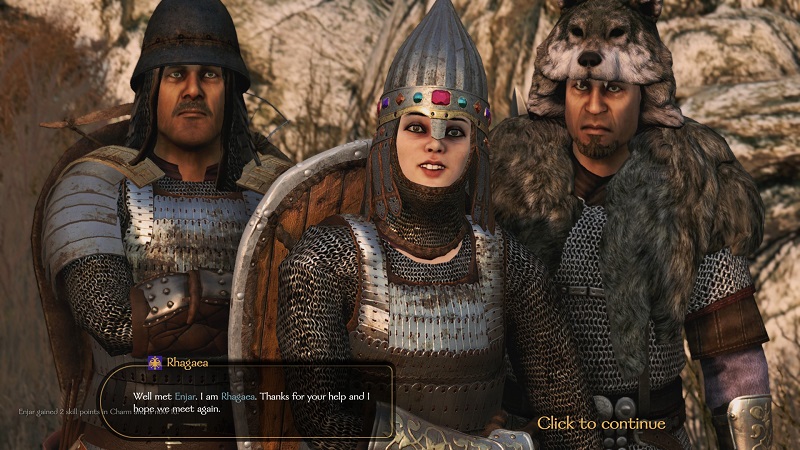 I think our kingdom is being run by a vampire. Who knows what I’ve gotten myself into this time!

This was quite a funny instance so far of playing Bannerlord. I did not even realize until after the siege that Southern Empire had taken a town. I thought this was just a castle. Despite everything going so wrong, there was still a way to get a win. I’ll need to make sure I make a game save more often.

It’s clear some things would not be working in Bannerlord with the game being at the start of early access. I was at least hoping sieges would be more up and running since that is something they showcased quite a while ago. I’ve not read the patch notes of what is truly working and what they are still getting up to par. I figure it would be more interesting that way and perhaps create some crazy tales of struggle, raging, and epic failure on my part!

Screenshots were taken and content was written by @Enjar about the game Mount & Blade II: Bannerlord