For the Mount & Blade fans out there who have been waiting what felt like a day that would never come. It’s time once again to pick up that sword, bow, or whatever weapon of choice you have. It is only out in early access with several features still in the works. We can at least stop playing Warband and venture out into the new world which feels like our old one in a good way. I know some gamers are a bit disappointed that Mount & Blade II: Bannerlord went into early access instead of doing a full release. It is expected to last at least a year in early access. So far I think enough of the game is done that people can start enjoying it now and even more so after each update gets put in.

Some of my most played games to date have been early access. While they can sometimes cook too long in that state and feel like they will never make it to full release. You do time and time again, get to enjoy new features to games that are already decently enough into development. It can sometimes feel like you are getting free DLCS even along the way. While it’s too early to tell if we will be getting that kind of value out of it. I for one dived right in.

Bannerlord has dealt with quite a few setbacks this game has had over the many years. Every time they are about to “release” the game they would suddenly announce a massive delay. Even with the current state, the game is in. I’m not quite sure how they though so many years ago this game was even close to release let alone having a date for it. They are giving a small discount to those that already own Warband which feels like it came out forever ago. They are also for the next two weeks giving a 10% discount as well for anyone who picks up the game.

Since a couple of people have asked. If you already own something like Warband they give you a $5 account credit that gets applied at checkout with the discount for picking it up early as well. This makes the game a bit cheaper since they are charging a base price of $49.99. Times are hard for many so around a $10 discount on an early access game feels generous.

At the time of downloading Mount & Blade II: Bannerlord, it came in at around 31 gigs. There was also a very small less than 1mb download so far today. For those who are having bandwidth issues due to so many staying at home or are dealing with other internet limitations. These things are best to keep in mind along with the fact they more than likely will be putting out a lot of patches in the coming weeks and months ahead.

I was hoping to have played by now when they were running a closed beta quite a while back. I never got an invite which is why I’ve been mostly quiet about this game. The closed beta only included multiplayer gameplay. Early access, on the other hand, has the single-player campaign as well. I got to play some of it today!

With early access you should keep in mind you could end up paying for what you only get right now so there is some risk involved in nothing else getting done. I know some people hate early access and swear off them. I think this is one of those games that is an expedition to the rule. They have already moved their developer to work at home to keep up with the difficult times the world is facing. I fully expect many amazing patches into the future as they slowly march towards a final release.

Start Of The Game Outside of some expected bugs, I have to say I enjoyed the depth the game provides at the start. I was not expecting it to so feature-rich as it is. It does have that old Mount & Blade feeling with a somewhat modern-day graphics feel.

I have not fully upped my in-game settings as my computer is starting to age. So I might need to make some adjustments after I face some large scale battles to see how things hold up. They do have at least a few settings all ready to go. There is also a decent amount of character customization to be had. I feel quite a lot of Mount & Blade fans have been waiting to see in a game for quite some time. I ended up spending a couple of minutes exploring different hairstyles, scars, and playing around with sliders of eye socket size among some other strange options! While we don’t fully know how your backstory will have an effect ton gameplay. I have made certain assumptions while trying to get the stats I wanted. Since I am looking to make a bunch of content and this is my first playthrough of this game. I don’t want to make it to hard where I’m off spending more time grinding just to get anywhere. We will have to see in the coming months how these choices come out to play if any.

This process did take a while to go through and read everything. I enjoyed the little bit of lore and what impacts each backstory at different stats of your life had. I was shocked by how many options we ended up having. While I did not count how many different screens I went through. It was more than I was expecting.

Overall this part of the game had a strong Mount & Blade feel to it. I think some are always worried when a game comes out that it will either be far too different or too similar and not end up being enjoyable either way. While I do feel it could be more of the ladder. I think more modern-day technology in gaming will allow them to take in a new direction will still playing homage to the older game. 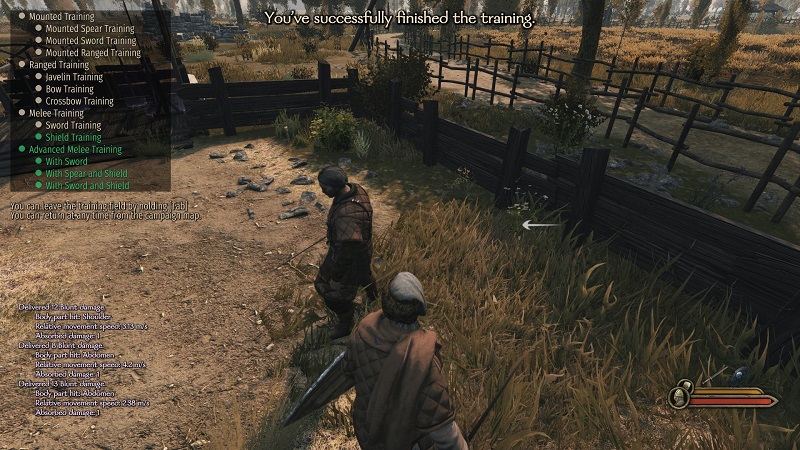 The player starts in the training area. If you choose to you can test out a bunch of different kinds of weapons. This included foot combat with swords and shields. Along with horseback combat where the player is being timed and attempts to hit targets while going around a track. Finally, an area for the player to test out range combat on foot. After that, they take you into come basics of the game before leaving you on your adventure.

You can tell they spent a decent amount of time creating and polishing this part of the game. Some parts of it where skippable while others were more built into the overall storyline of the game so therefore you just had to go with it. The tutorial was not overly long as it left me faster than I was expecting. I choose to test out all the different weapons. I found myself to be much better at using a spear and bow than I have been in the past when I played Warband. I made some decent time and a high accuracy amount for hitting targets on the track you run with a horse. I guess they just did not have my favorite kind of sword for hitting targets!

After you leave the training area which you can do at any point you feel like you. You continue to a couple of quests with the help of their tutorial system. It does put some limitations into place as far as gameplay goes. This can be a bit annoying if you run into any of them. 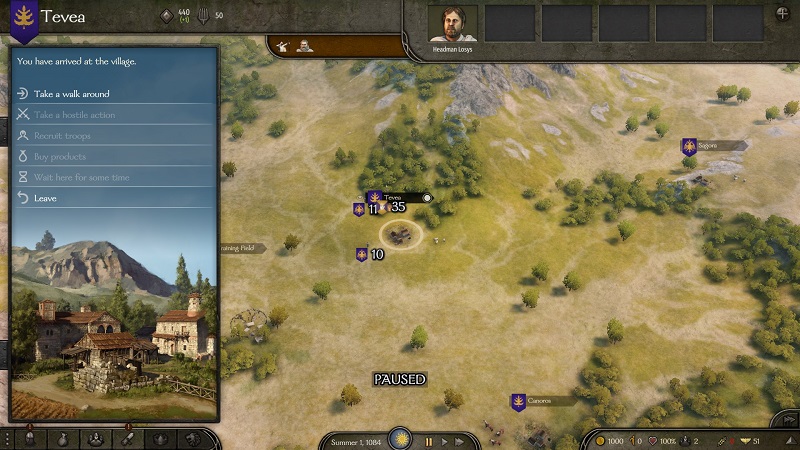 That, however, does not last very long. Once they show you some of the basics of moving around the map, attacking bandits, and a couple of other quick things in a quest. The handholding from what I could tell leaves and you are now free to get killed as you please!

This is also where my journey has ended for the moment. I do have plans to play more tonight when I get the time. I’ve already told quite a few people if I go missing blame Bannerlord! 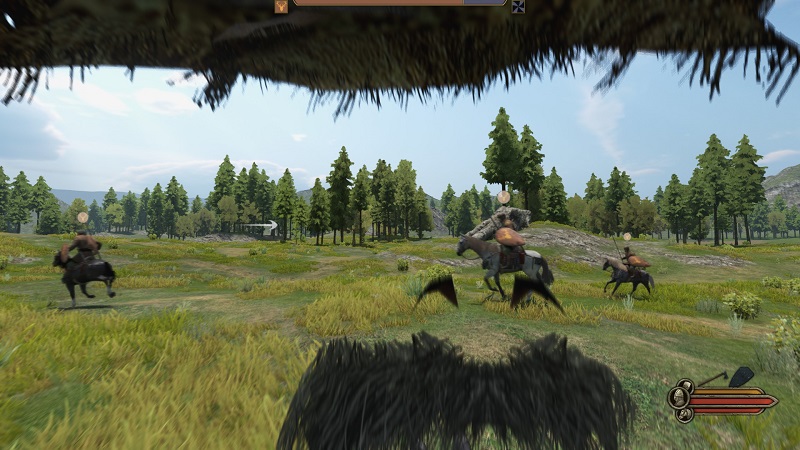 Yes with this being early access there are bound to be some funny things.

I just could not help myself it not sharing the above screenshot! I was in a battle in the first-person mode. What you see is my character hair for both his beard and head! Thankfully there is a third person by pressing R. Also once you switch back into the first person the camera glitch is gone.

There were a couple of graphics glitches with animation and clothing, pathing issues and some other stuff I’ve noticed. Seems they still have a lot of work to do on top of everything else they want to get into the game for the players to enjoy. 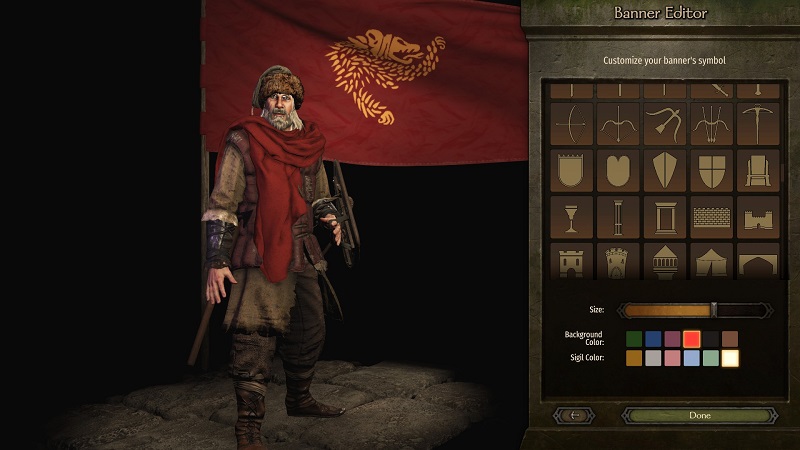 I do have plans to make quite a fair amount of content around this game in the future. Things will come out as I play it from guides, updates, my adventures and anything else I find interesting to make content around.

Mount & Blade II: Bannerlord is one of those games I’ve been waiting for quite some time. Many other games I was hoping to be out by now or least year keep getting delayed. I’ll still have other gaming content. Do expect a couple of posts a week about Bannerlord if the game lives up to my expectations and I can find the time.

I hope many are as eager as I am. I look forward to quite some fun and interesting times. The little bit of content I’ve shared about this game in this post is just a small taste for now! I hope you come back for more.

Screenshots were taken and content was written by @Enjar about the game Mount & Blade II: Bannerlord. If you are thinking about getting this game and are looking to support me further consider using my Epic Games creator code: enjargames at checkout or using this referral link to be sent to the store's pages.