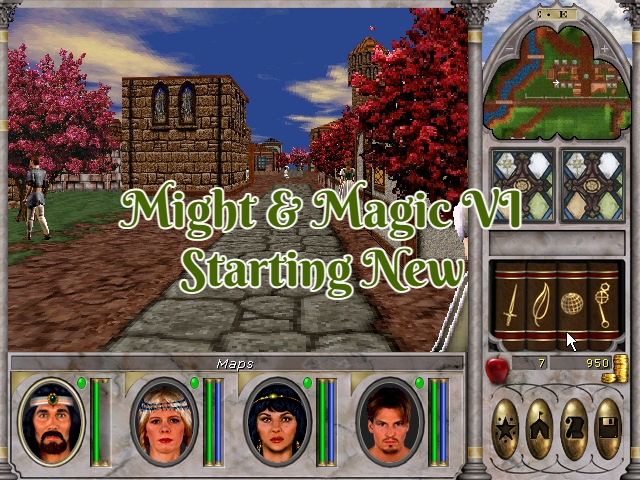 Might & Magic VI is one of those games I keep coming back to over the years. It can sometimes be 5 to 10 years since I last played or only a couple. Either way, this game is where I fell in love with dungeons and RPGs the most when I was younger.

A couple of years back I ended up writing a review on it. This time around as I return I thought I’d share more about whatever adventure and antics I end up getting involved in. For me, this is just a classic I don’t care how old it gets I’ll keep coming back.

As always I find myself blessed that I have a working copy of it. This game came out in 1998 and the CD I have for it no longer works. I lucked out by buying a different game and getting it for free on one of the platforms I buy games on. You can no longer get it over on that platform which is always the fear we games have when our beloved games end up getting lost over time.

While there are some player-made patches/mods for this game. I’ve never messed around with them and this won’t be a time I do so either. I prefer to just keep the experience pure for now. Perhaps one day I’ll look into what is there. The hardest part when returning and starting a fresh game is deciding what kind of group I want. At this point, I feel I’ve gone one too many times with the quick standard start. I decided to make some changes to that lineup.

While it is always tempting to go with a 3 sorcerer and 1 cleric party as I’ve never done that. I do always hate when casters run out of mana and those kinds of struggles early on in the game. Casters are quite powerful but I thought I’d go for a little more balance instead.

First I’ve never been that happy with having a ranger at my party. While I do usually get everyone a bow. I’d rather other some other classes at the party instead.

The second change was not having a paladin. It felt a bit strange at first having a character in my group that has zero mana or spells to cast. The knight however has a lot more health and I increased it even more.

As far as spending the points I always when returning didn’t quite recall where I should put things. You get 50 points total to spread out over the group itself. I mostly broke it evenly among them giving the casters a huge jump in having equal amounts of intellect.

In my haste I made quite a critical mistake that would hinder me for quite a while. I had forgotten that clerics get their mana from personality stats. So my clear ended up not being as powerful as I had hoped. A rather funny mistake to make now that I think about it.

Everything else got dumped into the Knight. I wanted to ensure he had some might for damage when I find myself in situations where melee is the only damage. I also pumped his endurance up quite a lot. While my casters will end up getting taken out many times during my playthrough I’m hoping the knight will always be able to escape and save the party in critical situations.

The last part was trying to work out what two skills to give each of the different classes I had selected. I more or less just broke things up over the Druid, Cleric, and Sorcerer. I doubt these will be the final magic types I’ll end up trying to increase in level. I however wanted a wide range of options to test out and re-call the different spell types each type of magic has.

Once I got in the game and changes the movement to smooth making it was possible to even move around the game without having to spam the key buttons. I had to decide what I wanted to accomplish first. There are quite a few ways to go.

First, however, it was wise to open my inventory and put on the small amount of starting gear you get. The first few groups I have to clear of creatures will be the hardest till I get some better weapons, skills, and armor. I then ran off towards a well that gives you permanent +2 luck per click. I ran through my group making sure to evenly distribute that permanent stat increase among them all equally. While it was tempting to give half of it to the knight since I’ll be having him pick up disarming and other skills since he won’t have magic. I decided it was best to just give them all of it. After that, I ran back to the inn that I skipped over and picked up some quick money and a quest. I then made my way through the rest of the town checking all the homes. I was looking for quests and paying the small fee to join a bunch of different guilds so I could have access to their skills.

Then, I needed to choose if I wanted to go to Dragon Sands now through a secret portal hidden on a roof. This would require me to save and spam reload every time the group got killed trying to get into NWC (New World Computing) dungeon. Due to their low level, they might get killed by a couple of creatures in there as well.

While it is worth doing at some point. I decided this early on because I wanted to see how my parry would fair in combat. While getting into NWC would give me quite the boost early on. It is sometimes more fun to hold back on getting the riches that await you inside. 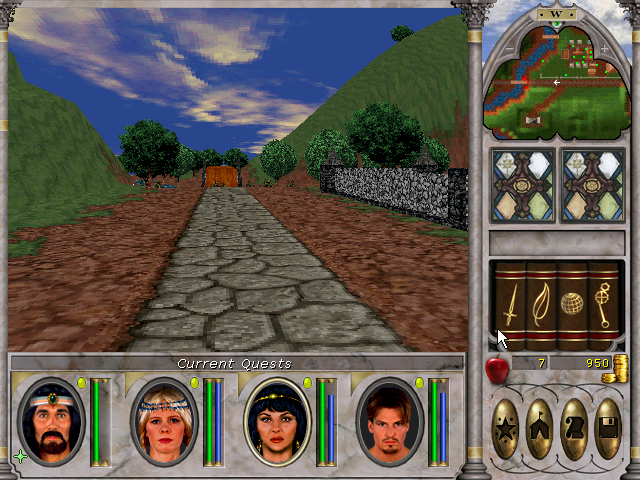 I decided instead to face a small group of goblins guarding a bridge to the next town. I know there are some chests to be looted over there as well. There were many a dozen or so goblins and they provide as always to be more difficult than I always expect.

The next time this zone respawns these goblins near the bridge will be a joke to clear out. At least I did not get killed and I got some much-needed money and items to sell. The next thing I wanted to do was head over to the next zone. There I could buy some needed skills that will make these first couple of levels quite easy to manage. I have a lot of grinding and clearing ahead of me. What a thrill to have started this game back up again.