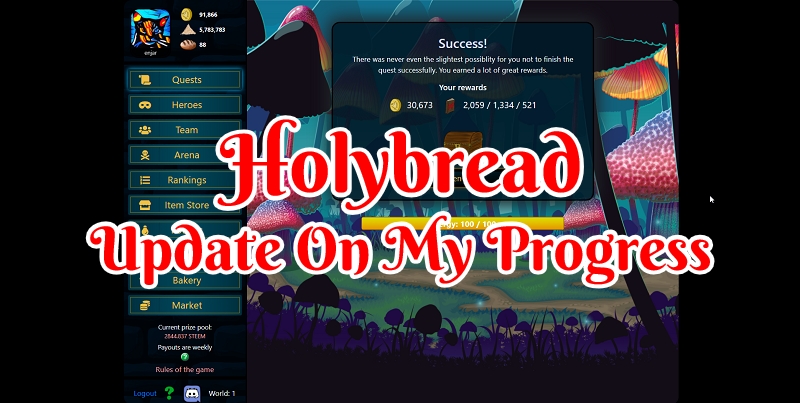 It has been a while since I’ve written about Holybread a browser RPG that plans to move to Hive when the developers have some time. I originally wanted to make a post on day thirty of playing by sharing my progress and any insights I gained while playing. Needless to say, life got busy and then we had some events unfolded that caused most of us to put content on the back burner. This is one of a couple of games I’ve been meaning to get content out for but that has not happened until this week.

While I have played almost daily for around thirty days to use my energy, get in my arena fights, and roll the gold shop. After that, I rarely logged in and I fell a bit behind. For those who have not been logging into the game daily you do after a couple of days stop earning breadcrumbs from not doing any area battles.

For this last update, for now, there are three areas I want to take a look at. The first one being the cost of playing and if I made anything at all. The second focusing on my ranking overall and if I’ve been able to maintain being a top player or if I fell off the ranking. Finally, I go over my heroes themselves and what I have been doing for them to try and stay competitive.

With this being a cryptocurrency game this is often something I’m asked. This game does end up being very cheap to play. You could play it for free if you wanted to. They do allow you to earn three free bread per day and if you rank high enough you will get some breadcrumbs as well that you could use or sell.

In total, I don’t think I even spent more than a couple of dollars’ worth of cryptocurrency. Those that got in within the first couple of days were able to hold on for quite a while at the top. Those that wanted to spend maybe twenty bucks could have bought better heroes off the market that would have given group buffs and now is the time they start to pull ahead of the free to play players.

I bought one hero just to ensure I had one when the time came that I was able to have a bigger party. I ended up looting a couple as well from running quests. None of them sold as they were just basic gold bonus heroes.

As far as items I did end up selling about a dollars’ worth of stuff. This was one part of the game I was hoping to see a higher volume of players buying cheap gear. Thankfully there are no transaction costs to relist items so every couple of days I did adjust stuff. The downside I struggled even selling gear that was better than what I was wearing. 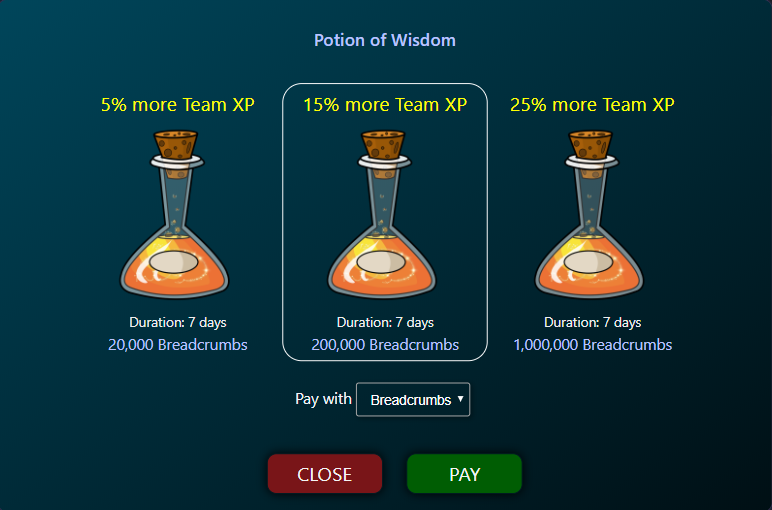 A while back they did add in further value for breadcrumbs which were quite needed. They are now used for repairing gear which I think is where most players are going be using them. You could also buy a premium lite which lasts for 24 hours giving you more items and hero slots, along with, bigger energy save the tank. Finally, they added a potion shop where you can get a temporary boost for team life, damage, gold, and even item luck. None of these things so far have I spent any breadcrumbs on.

With the chain split coming I ended up selling off a large portion of my breadcrumb holding. While I’m still holding 6 million for any future use I may have. I ended up getting around 20 Steem for the large quantity I sold. I can’t check since that exchange is currently not working.

In the future, at some point, they are going add in the ability for them to do buybacks in-game. That has not come around just yet. I think moving forward that a decent way to handle things till more things are set up if they get this game on Hive soon when they can.

Overall it was not costly to just enjoy the game. That, for the most part, was what they wanted the game to be for players. It’s more a for the fun game than it is trying to get a pile of crypto off of it by playing. For that, I enjoyed it for a few weeks with a little profit-taking at the end. I have some good news and some bad news regarding my ranking. During my last update and my first thirty days, I did manage to get into the top twenty again. Since I rarely play anymore I have fallen to 100’s in the ranking. This is much better than I was expecting.

In the top twenty and even fourth, you do earn a decent amount of breadcrumbs. This has allowed me to collect millions of them without much effort other than playing daily. Since I’m around a month behind now on using energy my heroes have fallen behind on level and even gear to get much further than I am currently.

While I could get back into the top one-hundred and even higher if I started playing daily again or spent a little money on the game. At this point, I don’t feel like playing daily for now. I’m sure there will be some future updates that will cause check things out again. 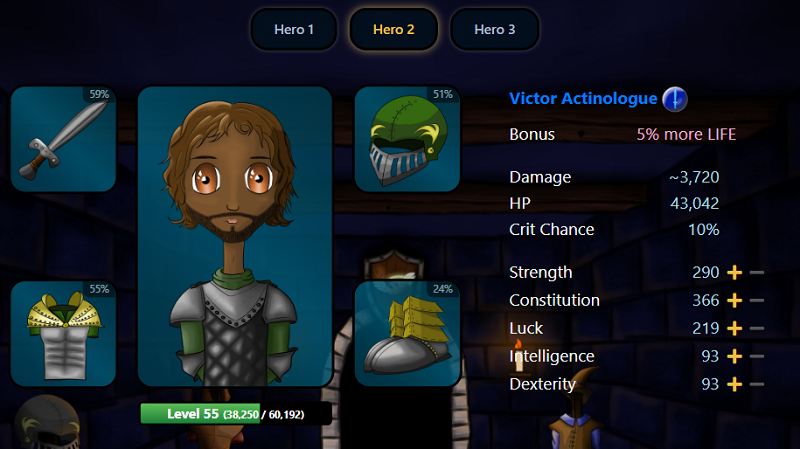 For the most part, I got lucky on some decent rolls once in a while by rolling the item shop daily for thirty days. I never did land anything crazy that would have been worth a decent amount. Instead, I started to focus the bulk of my gold on buying stats for my bests heroes first.

I ended up getting my main hero a mage to level 61. My second highest a warrior to 55. Then my last hero to make up my team a ranger to 42. For both the mage and warrior I have found them some decent gear from buying it out of the item store with gold. While I have a few pieces I’m waiting for the ranger to level up to use not much effort has been put into trying gear her out.

I consider this robe to my best item. That constitution roll makes my mage quite a beat to deal with having 47,616 health. He also has a decent weapon so he hits like a truck with a base damage of 5k.

Buying stats even at my level and the amount of gold I can earn per quest is getting quite pricy. Most of my mages stats are now over 20k per one stat increase. That, however, will balloon quite quickly as just spending a few more points into intelligence for damage boosted the cost to over 60k per point.

My other heroes are much cheaper to buy stats for. My main which has done the bulk of carrying my group for so would no longer be my main focus for investing resources into if I wanted to continue playing.

Parts of this were purely RNG and just getting something good. While the rest was just playing daily and making do with what you got. If I wanted to spend a little to try and catch up I would still be behind on the levels. I also don’t feel like leveling up new heroes with a team bonus.

For now, I think I’m done with this game. When it gets moved over to Hive I will more than likely still hold off on playing. While it does not take a lot of time to play if you are at your computer and can switch once and a while to the game to press a couple of buttons. I tend to get distracted easily so I’ll hold off on doing that for a while.

When this game does come out with some updates I’ll be sure to check back in and write about them. I do understand with the crazy year 2020 has been so far many things will be slow for a while as they are dealing with life. I do wish them the best of luck and I look forward to seeing what they can turn this game into in the future.