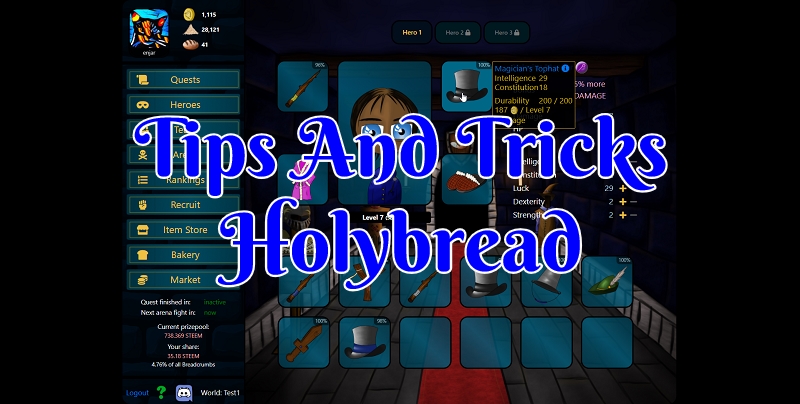 Holybread is a browser RPG set to launch in a few hours on Steem. I thought I would share some tips and tricks I learned while I was a tester for 2 weeks. While some things could be subject to change many of them should still be valid at game release on the 27th of January.

If you have not already seen I have a full review out I wrote a couple of weeks back that contains my personal firsthand experience while the game was in testing for 2 weeks.

If you have not already pre-registered for the game before it launches you should consider doing it now while they are still offering a free gift. Those that are late don’t get anything extra special. You can use my referral link or the link marked as non-referral at the bottom of this post to go to the website.

2. Always Do Your Daily Quests 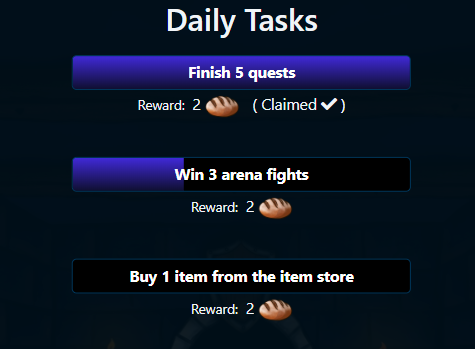 The quests at least during testing where quite simple and things you should already be doing anyway. It’s a great way to pick up some free bread or anything else that might be a reward for completing your daily in the future.

You can hold 100 energy max in your main bar if you are unable to use it right away don’t worry too much. Along with that during testing, we also had a 500 energy-saving tank.

Keep in mind only 5 energy per hour is transferred out of your saving tank if energy overflows into it. Which means it takes twice as long to use if they keep this game mechanic around. So while you can skip out on playing once in a while just don’t wait too long. 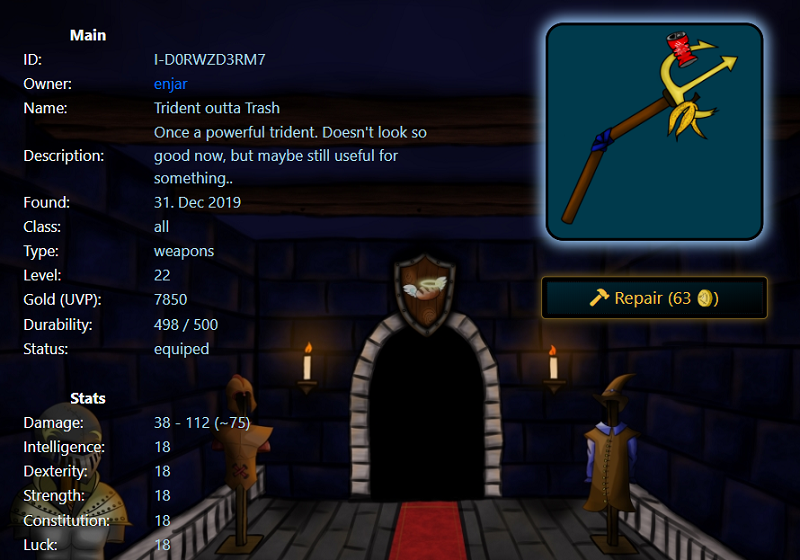 While it might be tempting to spend all your gold right away buying stats for your hero they also increase per cost every time you do. While you would get a short term bump in the arena a few hours later those that saved for gear will out pass you.

In the early game, gold is rather hard to come by and saving it to buy the right gear can have a better stat per gold cost ratio. Not to mention once you have outgrown that piece of gear you can sell it for half the gold you spent on it if the item store is able to afford the buyback.

You might also luck out and end up getting an epic item to spawn in the shop. They provide all stats and are quite costly costing thousands more gold each. Which means you could be out of a days’ worth of gold or more just to buy one. Since the shop will reset every 24 hours you don’t want to lose out.

As far as buying stats with gold for your heroes keep in mind that the cost is going to play a big role since it increases for each type every time. While your primary stat depending on the class will be something you want to focus on along with life. If you notice a lot of people playing one type of class over another consider speaking into the stat that reduces the damage they can deal with you. Many times will be best to buy 10 levels of one stat over a single increase of another so pay attention to what you are facing in the area. 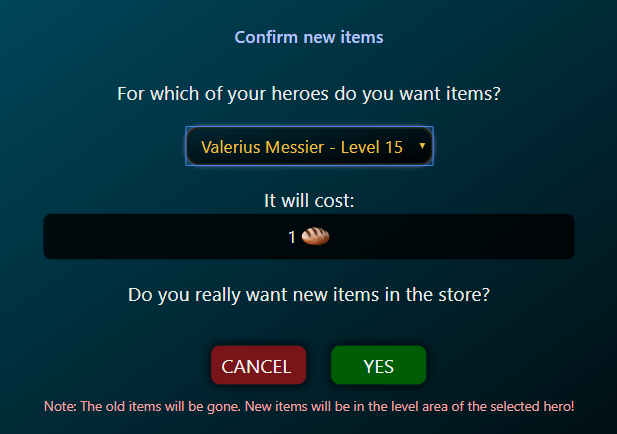 Every day the gold item shop resets along with the cost to re-roll the entire shop. You usually need to buy at least one item out of there anyways for a daily quest. it’s always a good item to check the shop daily to see if there anything you want.

You can also re-roll the entire shop if you are willing to pay bread which is a premium currency that you can buy in the Bakery. Each Subsequent re-roll costs an additional bread then the last. Try and avoid doing this close to the daily reset as you could end up getting items you can’t afford to buy and missing out.

While it might be tempting to just buy the lowest item out of the shop for a single slot getting a new item. You only get 50% of your gold back if the item vendor even has any gold remaining to buy. Not the best thing to do with your gold.

Your hero levels also have an effect on stat ranges an item can roll so re-rolling the shop right away if you have full energy is also not the best idea. More on levels below. 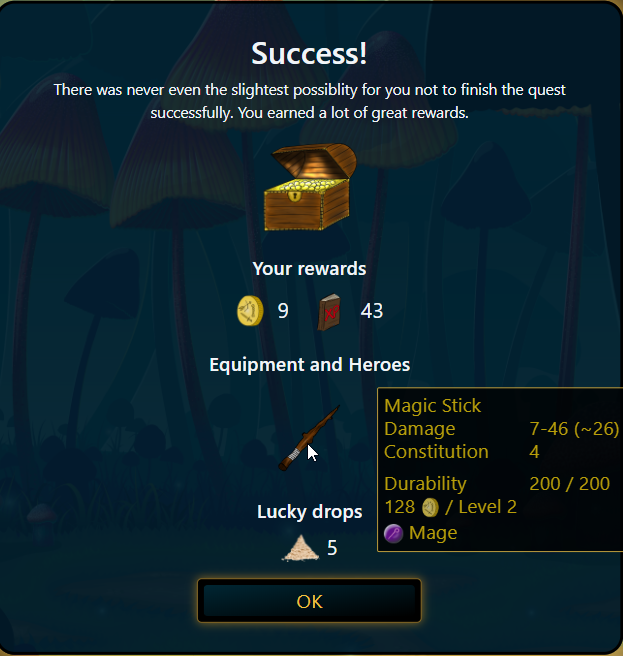 Questing is going be your best place for farming gold, experience or even getting drops which do include heroes. Always check your quests before deciding which one you want to take.

When it comes to item drops (not heroes) if a quest is going have a weapon or armor drop it will show you a silhouette of an item. Usually, the experience and gold rewards are lower from these kinds of quests.

Check your quests for which one has the best gold or experience cost to energy spent. Some of them tend to offer a really amazing efficiency per energy spent on one thing. While others won’t and should not be taken unless you don’t have a better option. If you don’t see anything you like to run take the energy quest costing quest so you can get three new offers the next round.

Questing rewards will also scale with the number of heroes and their levels. So always run with a full team.

Your hero’s level can affect quite a few things. From the range items to roll to how hard it is for someone to deal with damage to you in the arena.

Item stat rolls from the item shop and quest drops are based on your hero's level for the range they can roll. If you feel you have enough gold consider focusing on just experience. It will not guarantee you get better rolls just a chance at higher ones.

Levels are also used in calculating damage taken by you from other players in the arena. Having a higher level and more stats in their primary stat will reduce your damage taken. Making it rather hard for every low level to beat you in the arena. 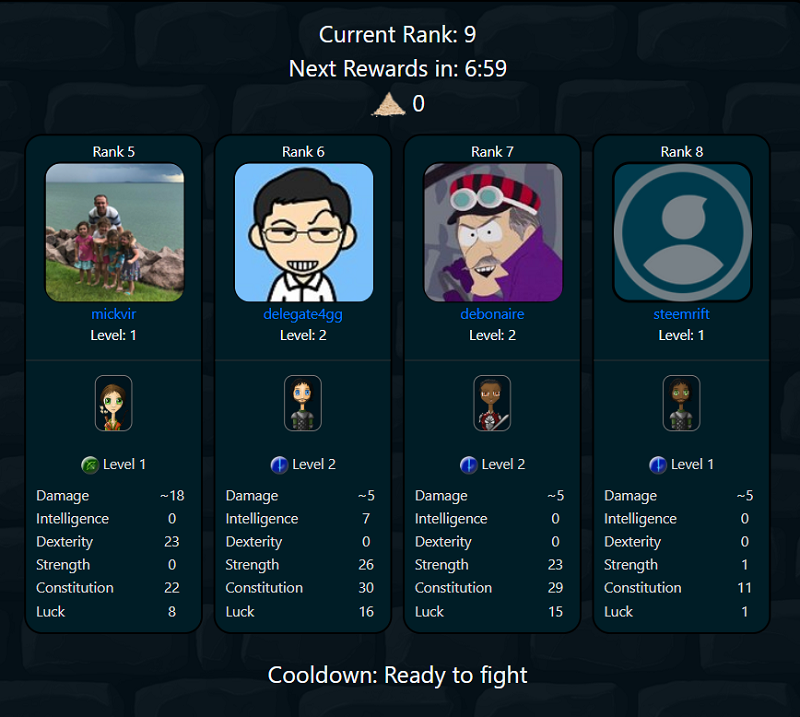 The Arena is going be the biggest place for the time being to pick up bread crumbs which will come into play for your reward later on when they do a buyback of them and possibly other ways of using them in the future.

Outside of the 15-minute cooldown timer, there was no other limit placed on how often you can attack in the arena. You can also be attacked at any time even when you are offline.

Every time you log in to send your heroes off on a quest check-in to see if you can do another arena battle. Outside of needing to spend enough energy you also need so many arena fights to unlock up to your third hero slot.

While the arena gives a little bit of gold it also has a massive dismissing return for attacking low ranks. This is really not the best place to farm for gold anyways. While it might seem decent in the first few days of playing. After a couple of weeks, the amount of gold won per arena battle is nothing compared to questing.

If you are struggling to defeat someone considering spending gold to buy stats or even rearranging your team. Ideally, you want to be fighting heroes that do not have strong stats in your primary stat while you do regarding there heroes. Most will have a mixed team of all three classes so just changing the order of your heroes to better match what someone else is using can change a loss into a win.

The game developers have expressed quite a number of times during testing that the goal for this game is first and foremost for players to have fun. They have a bunch of cool stuff they are focusing on adding into the game at a later time such as mobile release and dungeons.

While yes you could make a little bit of cryptocurrency called Steem playing this blockchain game by selling items or heroes on the player market to other players. Along with exchanging at some point bread crumbs on the Steem-engine market during a buyback period. It’s been made very clear from the start that it is not the main focus of this game. Fun is and I’m sure some will argue making money from a game is there fun to that I wish them luck. I’ll just be enjoying this game.

My Holybread Referral link. I get some bonus bread when you buy bread if you sign up using my referral.