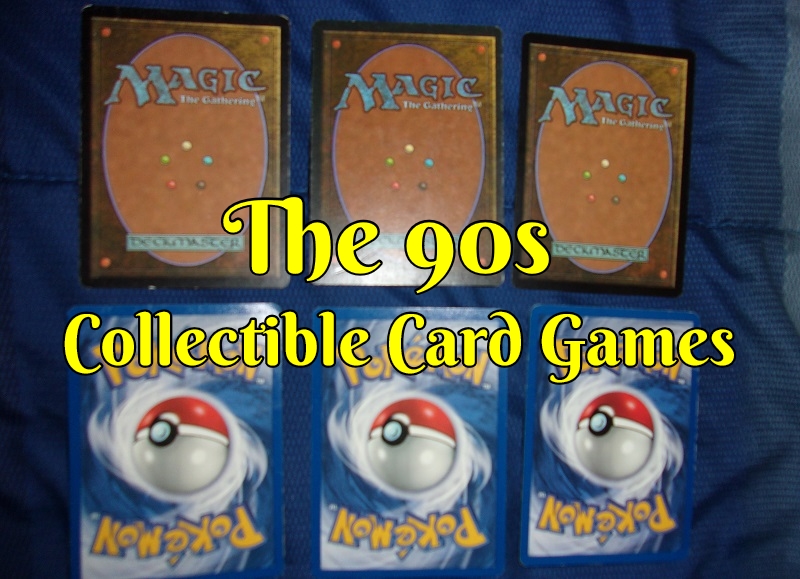 For me, the late 90s was the peak of physical collectible card games like Pokémon Trading Card Game (PTCG) and Magic The Gathering (MTG). I played and collected a bunch of other ones as well but these where only two that have remained intact and not lost over the decades.

These cards could be found everywhere in the town I lived in back in the day. Thankfully back then it took a while for parents and schools to try and ban them outright from being played.

It seemed like every kid's show was also trying to pump out some kind of card collection game (CCG) along with all the other collectibles. Most though never stood a chance and have not remained like PTCG and MTG have.

The Kids in my area were never really into baseball cards or other sports cards like our parents where when they were growing up. At least most parents could understand our fascination to pick up a fresh pack and rip it open like a pack of hyenas. It’s not like today's markets where people open the pack, put them in sleeves, I guess just look at them? They are supposed to be played with and mine are quite dinged and scratch from doing so.

I remember before school, lunches, buses, weekend sleepover at friends, and campgrounds these things were smuggled into book bags and lunchboxes for a great time. Often times the nerd tables were getting a lot more excitement happening at them then the other social groups. As we yell after winning or getting a good draw. We even had our own sub groups that would look down on another group for what kind of CCG they were playing. Oh, those Star Trek players. Never would I have been caught holding such cards! 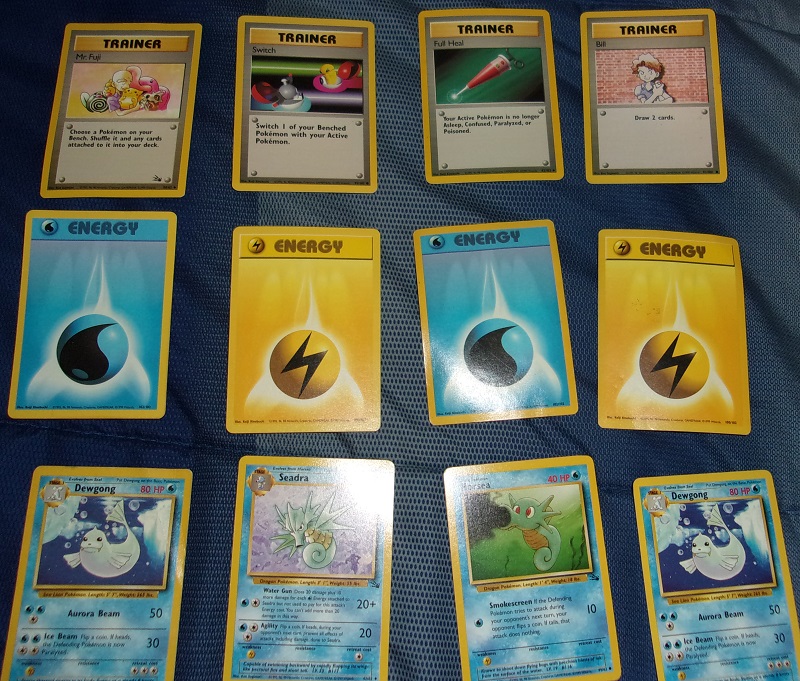 This one for whatever reason I have a hard time even remembering what the gameplay was about. I know these days there is still a very hardcore group of players and this still alive and active game. I did however remember going to meet friends and storing a deck in a pencil box when I took it to school.

As far as what I do remember it was something along the lines that you had to just knock out all the Pokémon the other trainer (player) place down on the field. I don’t recall it being a very complex game such as MTG was. Perhaps that is why I am having a hard time recalling. 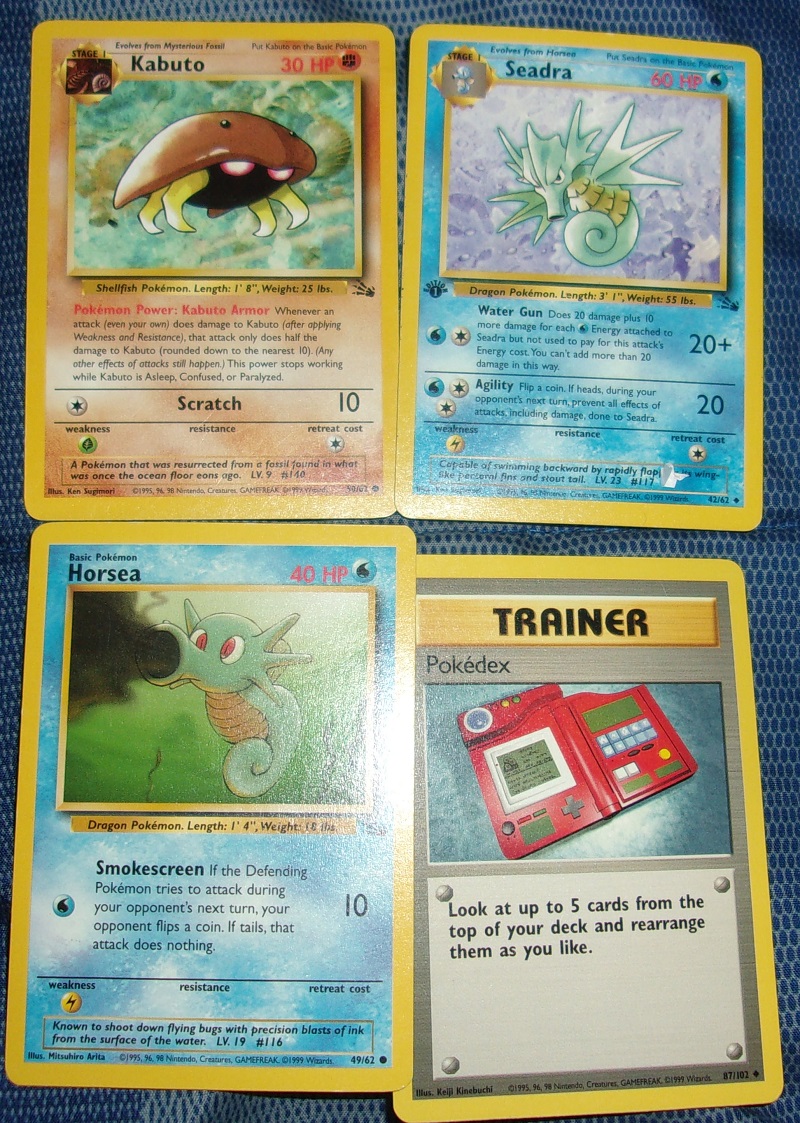 I do know for certain we often make up our own games and that is why some of my cards are quite dented. Back than tennis balls where good enough for a Pokémon Ball and we would take turns tossing them from a distance to try and “catch” (land) the card to capture it.

My best friend at the time was a huge Pokémon fan perhaps one of the biggest in our town at that time. He had clothing, a hat, whatever there was to get around Pokémon he wanted. It was a fun and endless topic to talk about for him. So this card game was a great welcome once he discovered it.

I would often go over to his house on the weekends and we stay up all night watching the endless Pokémon cartoons. While opening booster packs that he had acquired from his trip that week to the card store. We rip open the packs and gaze at whatever cards they were. Then sort them by color and have some fun reading what each one of them did as well.

Most of my cards where heavily played and not stored the best as you can tell from how bent out of shape mine are even more so after how rough we were on them. I had them all in what should be a nice binder. Over the many years, they have slid right out of it the protectors. The photos I took were in fact of cards found at the bottom of a box. I have no idea where my main collection has been stored. I must have gotten fed up with trying to store them in a binder every time I moved and needed to pack them up I would forget and they slide right out onto the floor into a pile.

They are also the English version which was never as sought after as Japanese. I did look them up online when I was younger and no longer admired them in the same way as I use to. None of them were worth much and still are not. 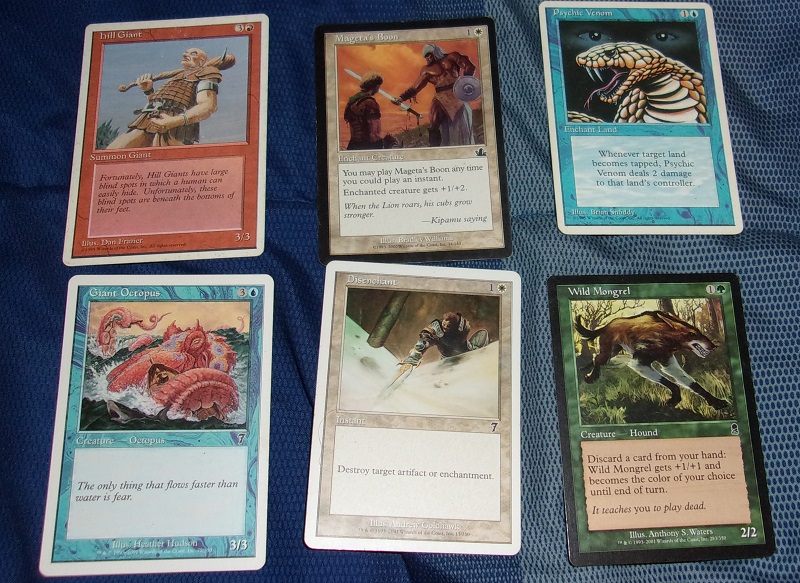 I was a bigger fan of MTG myself and I had different friends that were big into this game as well. This one I recall actually playing a lot more games. I also remember just how amazing I found the artwork to be and even to this day I appreciate it just for that.

Over the years I have lost my scoreboard which was just a piece of paper they gave you to play the game with two markers on it to indicate the player's current health points. You would want to clear the field and then attack the player health itself till they reach zero and you won. 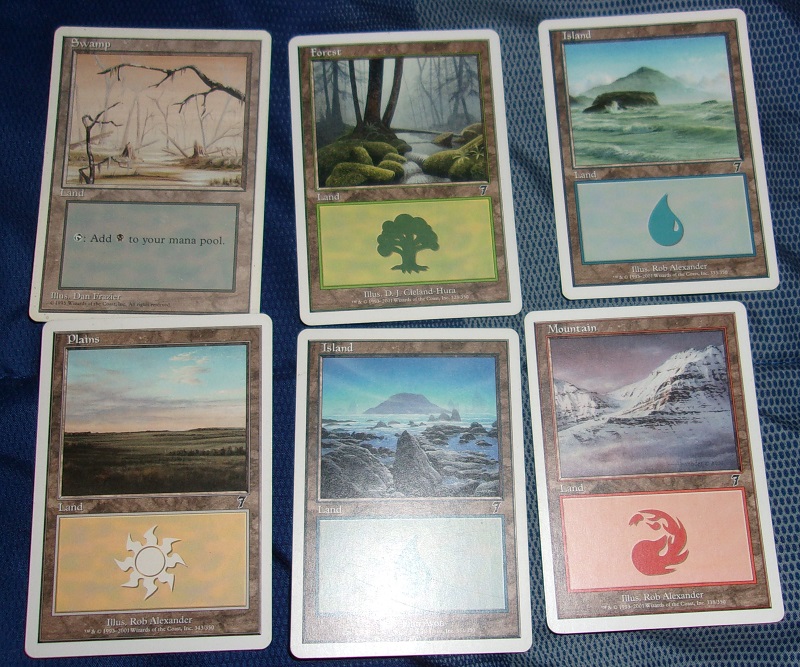 You would have to place down lands to be able to summon spells and monsters which all come with their own cost. Looking through my old stack of cards I don’t recall what kind of deck if any I ran. I was just a kid at the time so I can only assume whatever random cards I had I played with all them of them.

We never played with the official rules or any of that nonsense. So kids would just have as many cards as they wanted in a single deck. This sometimes did mean you lost w3hen you ran out since someone else had a bigger deck. That was always just the fun seeing what cards you would get out of large amount.

I do remember a couple of times my parents taking me to the card store. My first time around I picked up a starter deck and a couple of boosters to open as well. The pure joy was in the ripping of the packaging and see what you got. I always wanted to find new cards I’ve yet seen so I could play with them.

Often times over the summer when visiting family member there kids would have MTG decks as well and it was a fun past time to play. We would play for hours into the evening until it was time to go to bed. Often times trying to get just one more game in. Since our games usually took a while to play after a few times down that road our parents wised up and said no. 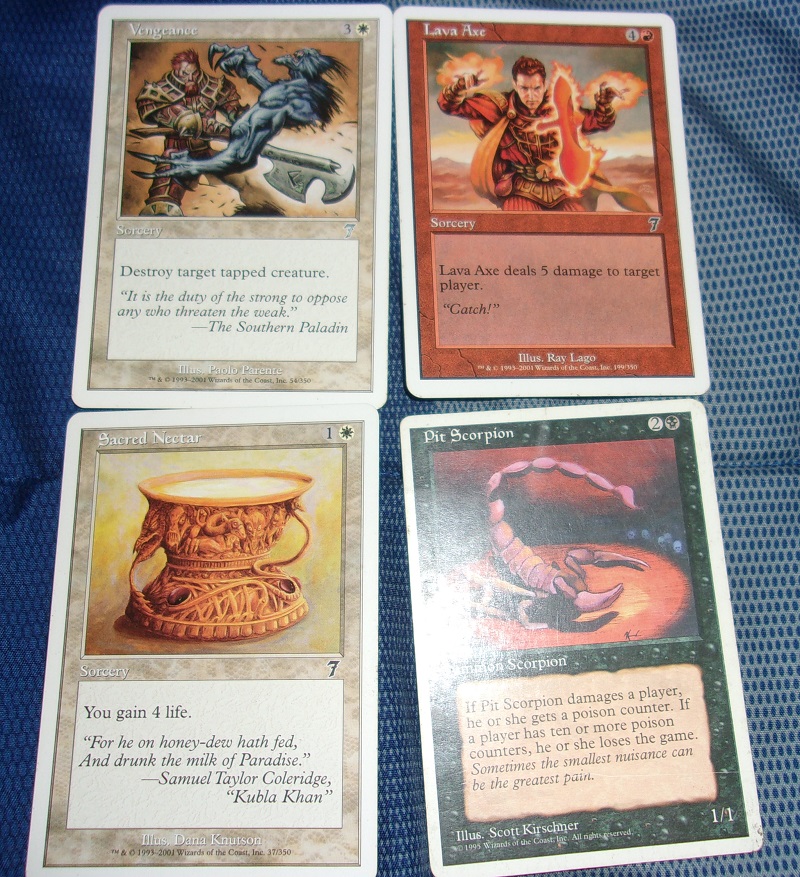 I use to love playing lava Axe. That five damage is quite the game changer!

While my cards from the 1990s are played they were kept in a box and treated with a little more respect than my Pokémon ones. Despite that even if they were in mint condition the entire collection I doubt would be worth more than a hundred bucks. I hate to think how much was actually spent to acquire it at least I had a lot of fun. These cards from my childhood I’ve always tried to hold onto during good times or bad. They are worth so much more than the couple of bucks to me. 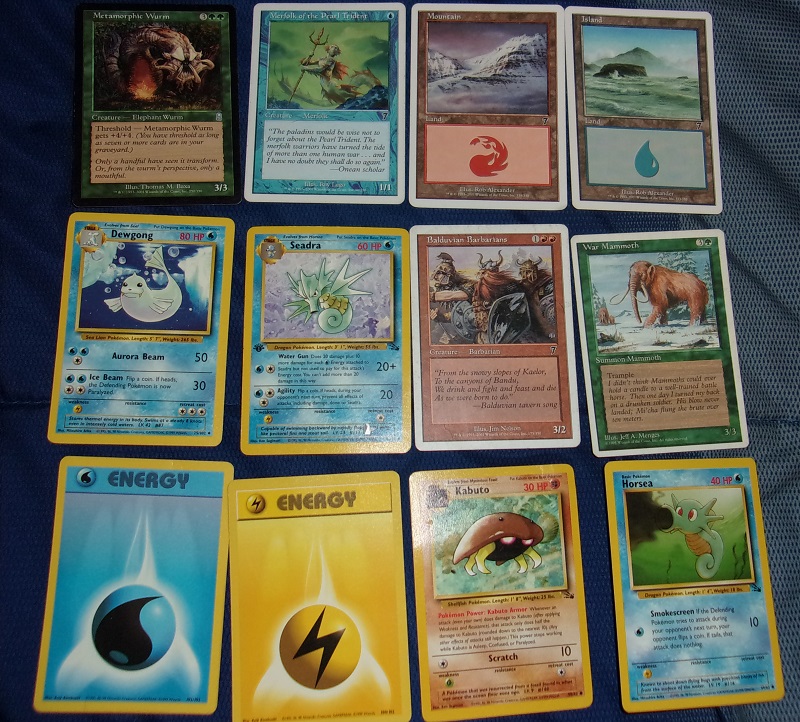 While it was sure a nerd thing to do back in the day to be playing CCG at tables during school and elsewhere. There was this fun culture around it. It gave a reason for kids to get together in person and play games with each other. Other than joking around the nerds were normally left alone because we were always playing those weird card games. It was quite a fun part of the 90s for me in gaming. One I still got a few cards around to remind me about it. Both PTCG and MTG are still a thing these days so its cool thinking the next generation could be playing. Even if it that means in a digital format as this genre starts to get with the time which I have enjoyed MTG Arena.

Photos were taken and content was written by @Enjar about the physical card games Pokémon Trading Card Game and Magic The Gathering.