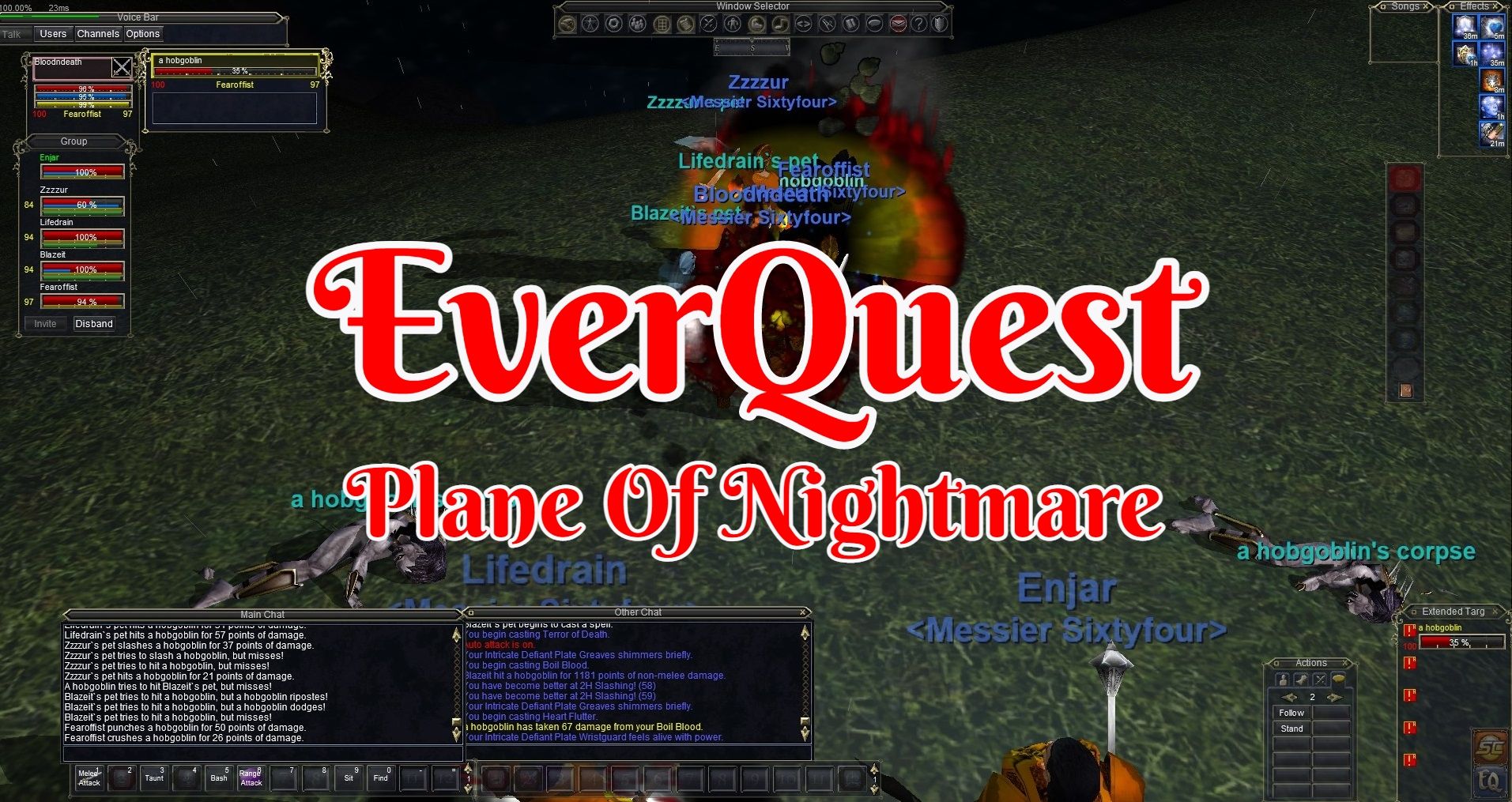 Plane Of Nightmare in EverQuest ended up being a zone we went back to a couple of times to venture deeper and deeper into. My biggest memories of it were never leaving the starting graveyard area that much and mostly hunting trees and spiders back in the day. A lot of this place has raid targets that we had to look out for. 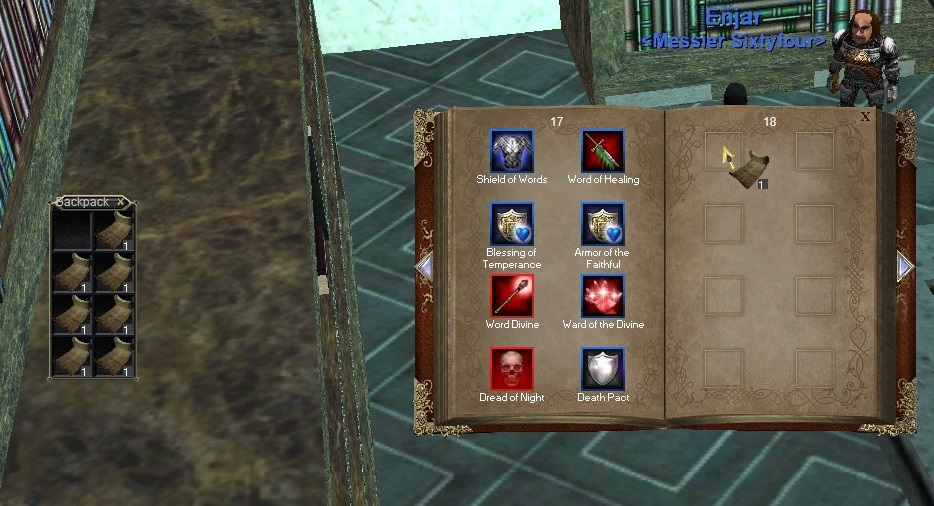 While we could have just exited out of the zone we were in and went for Plane of Nightmare we ended up going back to Plane Of Knowledge for resupplying and spell buying. My pockets were not super loaded with money but I was hoping between my two characters it would be enough.

I ended up filling a couple of bags worth of spells for the Cleric. While I could not buy a lot of spells he could not use them yet. I at least got the important ones. Mainly any healing and buffs he was missing.

If I recall not all spells for the level range I was could be bought off vendors. Some scrolls drop that you can turn in for spells. For now, I’ll just collect them mostly on the cleric when it’s his turn to looting them. At some point, I’ll have to look into the turn-in NPC to get him his spells.

After spending all my money yet again it was time to head for Plane Of Nightmare.

Getting To Plane Of Nightmare It turns out there was an opening by the ocean that you could walk through. I at first attempted to go inside one of the buildings. After that, I took a way around till I found the opening. I then recalled the path you had to take to get to the entrance.

Leveling in Plane Of Nightmare

For a couple of levels, we stayed around the graveyard zone in the entrance area. This place was kind of hard with the current gear we had when we started. We would later venture over to where the entrance to some caves is. Switching out our camping area a couple of times as we made multiple trips to Plane Of Nightmare.

I have marked on the map in red circles the best I could the few different spots we ended up camping around. Sometimes we would sit for a while at one spot then after I scouted an area a bit on the Shadow knight I might have moved camp to a few feet to a more spot that had fewer respawns on top of us.

We had a couple of dicey moments when we first got in here. I was pulling mostly the trees, spiders, and ravens. While I was known for playing around with the tank by purpling them (letting them almost die to the point they fall over unable to do anything while going negative health.) This was not one of those times I was messing around for some fun.

I would many times make it back to camp quite low on health. That would require some quick healing; while also, trying to keep aggression on the tank the best I could since I was dual boxing. Sometimes that worked out and other times the DPS in the group got a few hits on them. It was quite fun exploring a few different areas as I went out to pull. Part of the reason I wanted to be playing a tank/puller in my dual box setup. Back in the day I mostly played on a Cleric so I never got such a hands-on view of all the different zones I was in. The cleric would usually just stay put at select locations in a given zone.

We did have a few mana breaks. The gear we started with here was a bit lacking. Thankfully we looted some upgrades. Along with buying some as well. It feels like we are just breezing through the leveling process.

I recall back in the day when I would mostly play solo till the Planes of Power expansion and even then. That I could spend days on a single level if I was lucky as I would usually get killed a few times. Having a somewhat proper group this time around has made such a massive difference in terms of fun and speed. 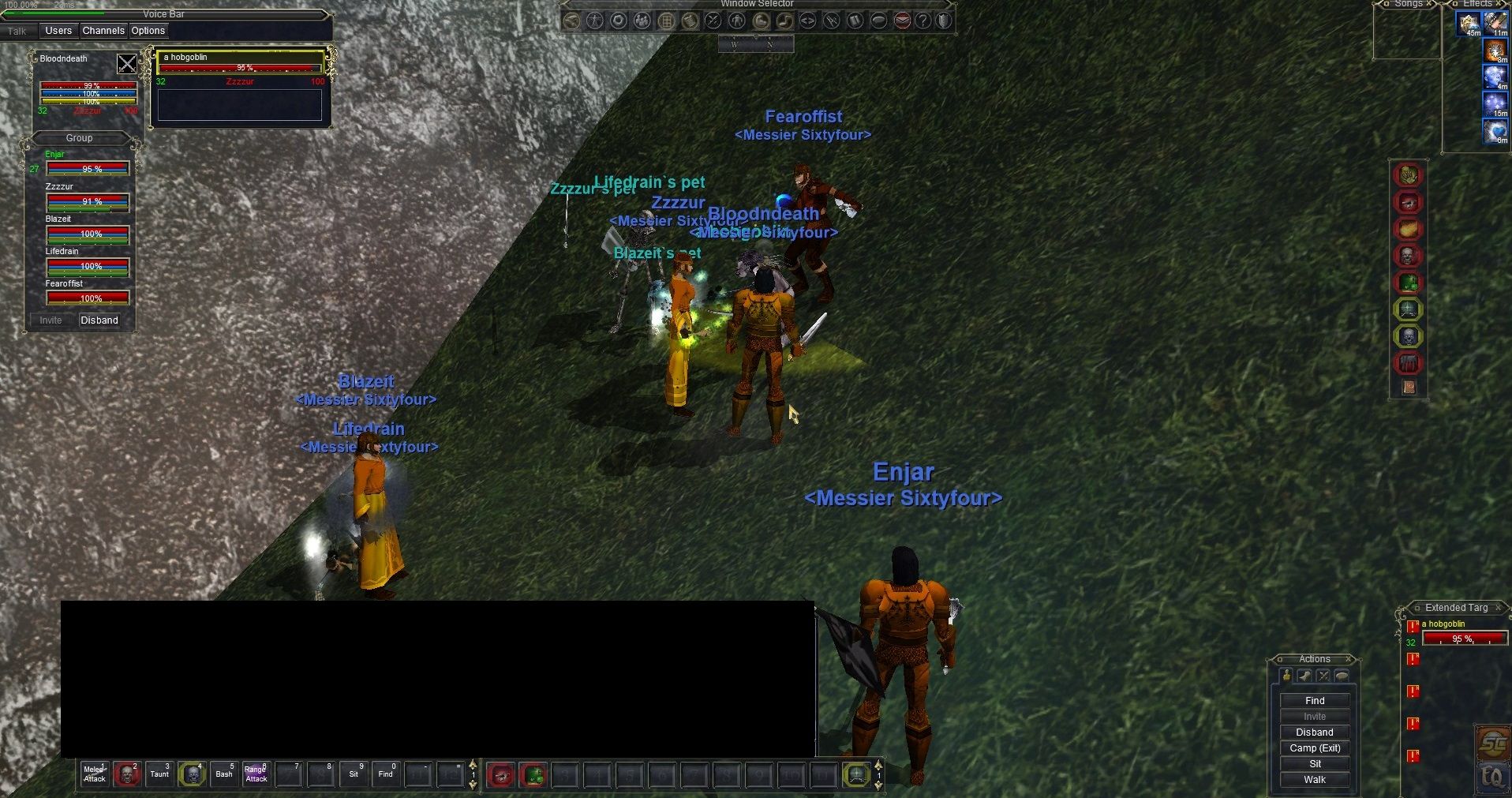 On one of our return trips to this zone we ended up moving away from the starting area and on the outside of a cave system. We needed some more challenging and better experience rewarding creatures to hunt. 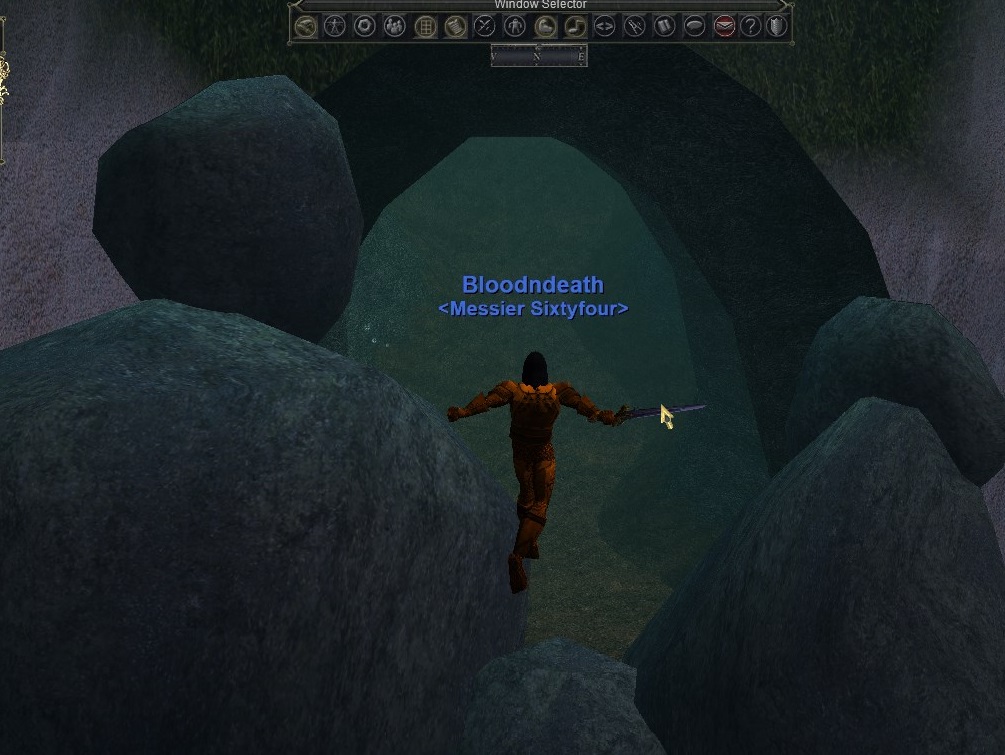 We ended up not staying that long at that camp. It was felt if we are going to kill the Hobgoblins we might as well go down into the caves and have a proper hunt of them. The entrance into the cave was down in the water which required a little swimming and some time to get into the opening.

I ran each character one a time till they were almost to land inside the cave. I did not want to get aggressive on anything early. I also did not want to risk trying to trust auto-follow since that is a great way to get killed using it in EverQuest.

The cave in Nightmare is quite massive. I can just imagen how many groups could have sat in here leveling back in the day. There are also raid targets here so I had to be careful of what I ended up pulling.

We sat at the entrance for a short while. We then had a rolling camp as we slowly cleared forward to get into different sections of the cave network down there. The Hobgoblin ended up being a lot better experience than some other zones we tried which kept us coming back for more.

With the rolling camp, I would clear ahead a few creatures by pulling back to the camp. After I made sure I got everything ahead the camp would then move forward to the spot I was pulling from. We would then repeat doing that.

While clearing in the cave getting adds often occurred. So I had to be mindful of that before calling for everyone to move up. I could not exactly just put the cleric on auto-follow and have the camp move with the tank every time he went off to pull. Once we were inside the main cave chambers they were of decent size. Large enough for at least us that we could pull most of everything inside one and go on a mana break while waiting on respawns.

The downside was we would sometimes end up camping right next to a respawn. So taking breaks could sometimes lead to some intense moments if the DPS or slower was AFK. The tank only died twice which was a lot less than I was expecting.

We even found some named to kill while down there. The loot was not that great. It was at least something as I continue to be quite broke in the game barely keeping up with buying my spells and some upgrades from time to time.

While back in the day I did not spend an insane amount of time in Plane Of Nightmare. I also don’t recall ever raiding here either for the most part. It was however a blast to return here a couple of times. We never did explore more than just these caves.

I had a few different zones I wanted to visit in this expansion. Some of them I do have plans to grind out a lot of experience in. While others we are just visiting for a day or so. Re-living some of those memories of the different zones that we can recall.