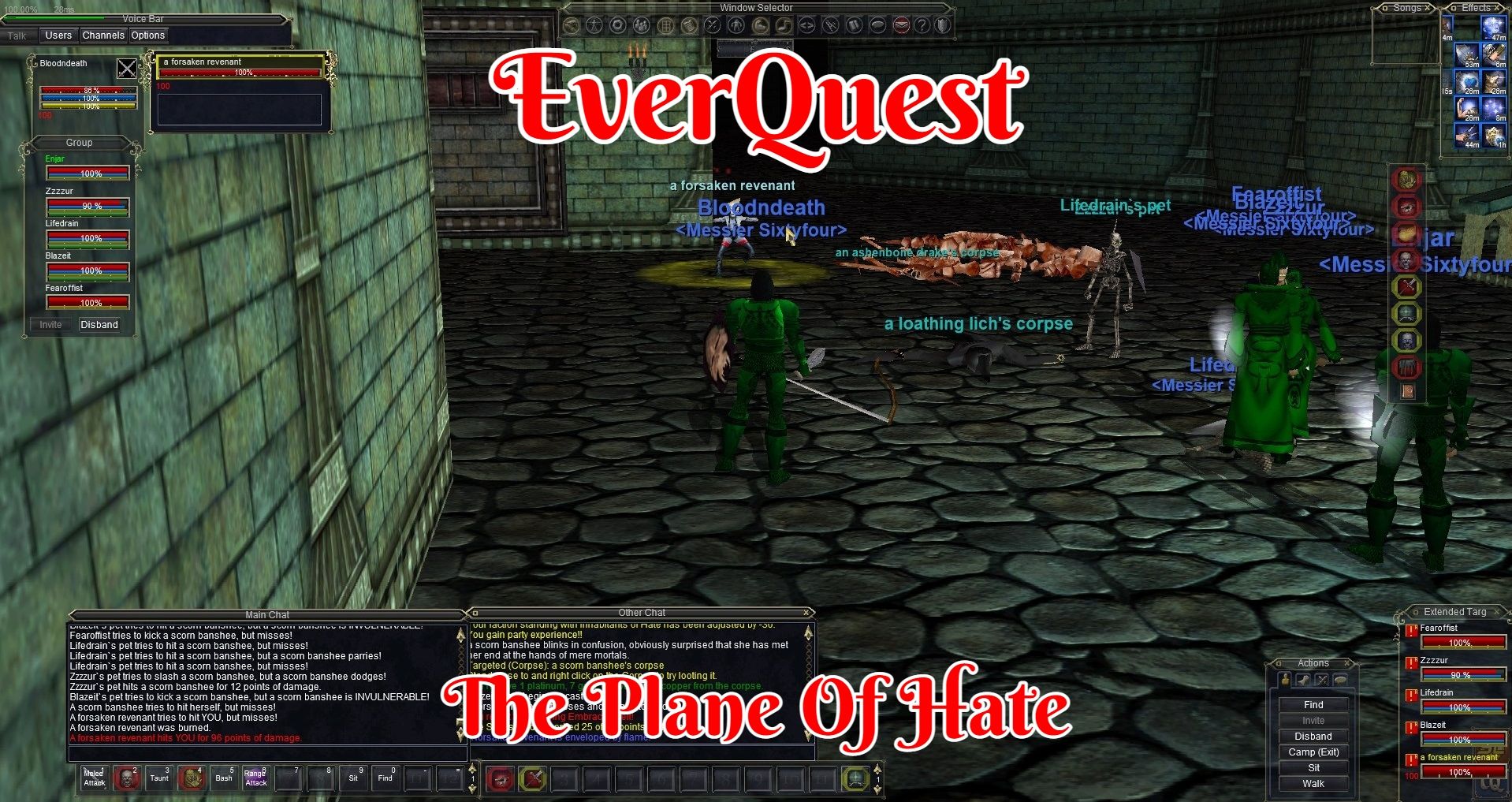 With a name like that, I sure hated the place. It was like I was not supposed to be there leveling. While it was quite easy to get there the experience rate was horrible as the monsters you had to fight themselves. After some failed attempts at this place, we ended up going back to the City Of Mist.

I had high hopes that The Plane Of Hate was going to be amazing. The quickest way to get there was using the Guild Hall and buying a stone to set the portal in there to it as our destitution. Just one small issue. I was not in a guild.

So the Messier Sixtyfour guild was created. With a Guild Hall we could afk in here and our buff timers would freeze in place. There is also a pool that increases your regeneration rates. So we had a bit of a pool party before heading out.

One of the bigger befits however is the ability to buy stones that open a portal to select zones. While some of those stones are easy to guess where they send you. Others have a bit more cryptic names making anyone guess another. Unless, you have deep knowledge of the game and what zone portal it will open to.

The stone I needed for The Plane Of Hate is called Fuligan Soulstone of Innoruuk. Yep, that would not have been my first guess either it opened to a place called Hate. Perhaps my second guess. Thankfully it was only 50 platinum and I had enough to buy one. 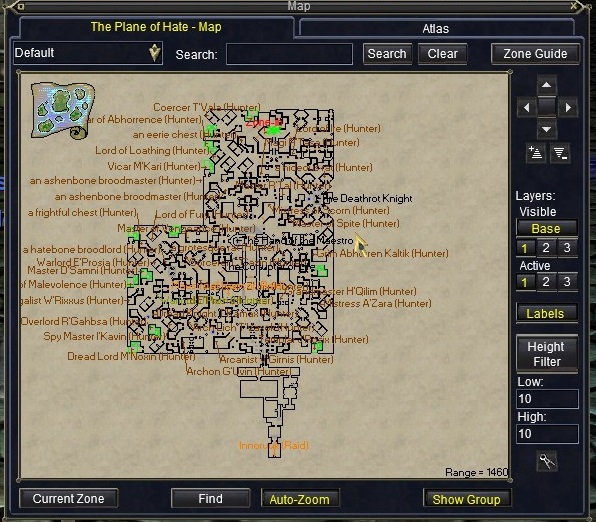 While the zone has a few different areas to it. We never left the entry area. As the creatures here were quite nasty to deal with. They cast all kinds of spells that create many different kinds of issues.

There was also not a lot of room in the zone-in area either. You had spawns quite close by. So we always had to do our best to pull right to the wall if we could. The issue became when dealing with caster creatures. They want to attack at a distance and that creates issues.

The best way to deal with a caster creature is ducking behind a wall if you are pulling one. This forces them to come in closer and go around the corner of that wall. Thankfully there was a wall right next to us. I just had to make sure the spawn there was not up when if I wanted to do that trick. 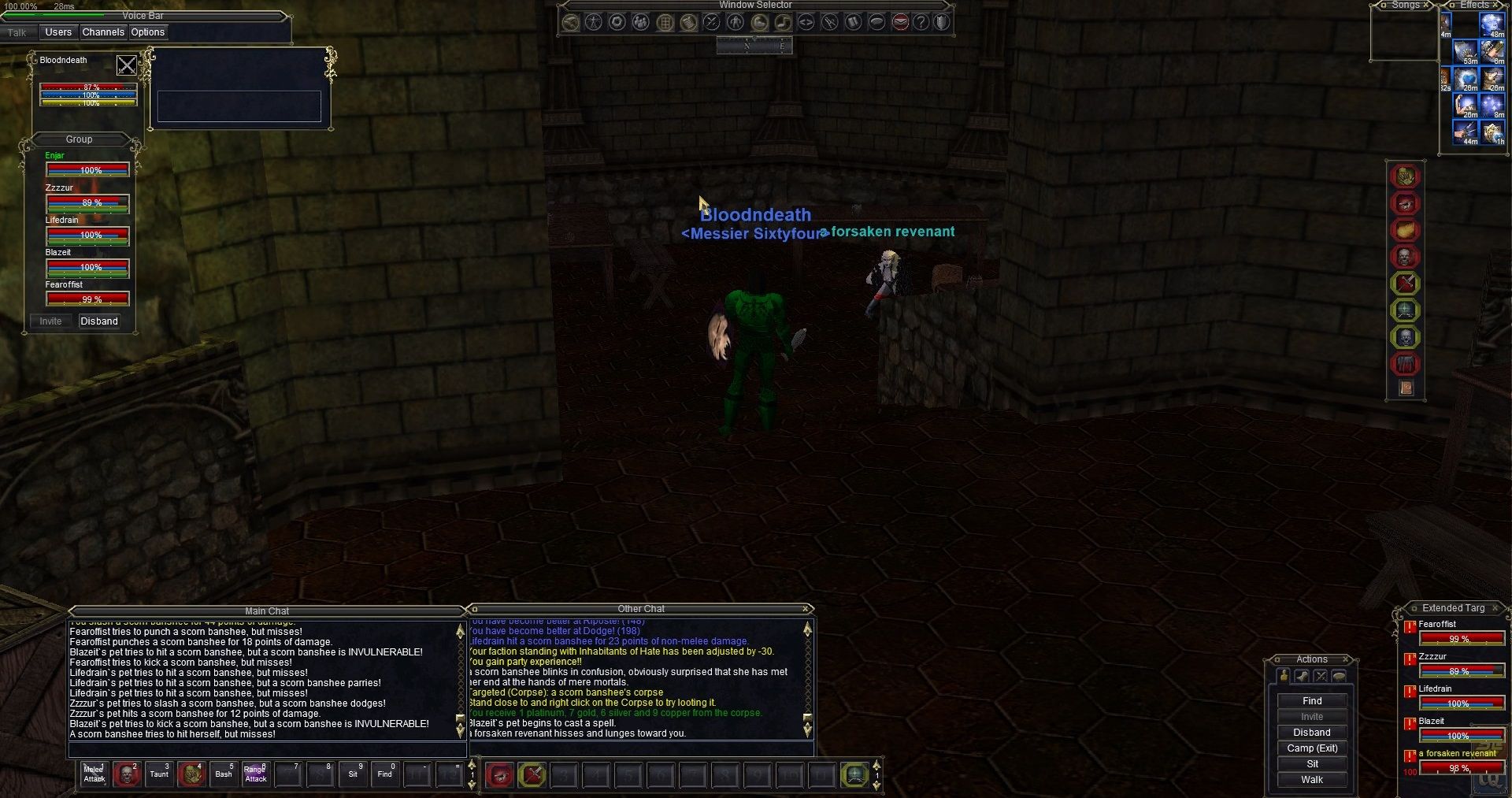 One of the bigger challenges here is some of the creatures would charm who they are attacking. Nothing like having your tank start attacking and taking damage from the group. Meanwhile also not tanking and having a caster get slapped across the face with aggression on the creature itself.

You just hope in situations like that the healer is not the one getting charmed. When things go sideways unless someone can finish off a creature quickly you are going to need all the heals you can get to stay alive.

Some of the creatures in here are clerics themselves. This means they are going to heal themselves unless you stun them or kill them quick enough. Some of them even spawn in groups with each other. Making it quite an annoyance to deal with. Then you had the creatures that would attempt to root you in place. If you are pulling something like that you try and hide behind walls and corners when you can. If they can’t get a line of sight on you there is a chance you make it back to the group without getting stuck out in the open rooted.

With pulls like that, I would sometimes have to use my fake death spell to lose aggression. Wait out any timer I have if I’m rooted. Then pop back up and attempt the pull again.

Other times I would be close enough to the group that we risk walking out a bit from the wall to start getting some damage on one of them. Once the root wore off I’d try and finish breaking it back to the proper camp spot and we would readjust as needed.

This place also had an out-of-combat timer as if it was a raid zone. Although it says there is a raid instance off in the distance making that the raid zone. This made mana breaks take forever as it took 5 minutes of being out of combat before the higher regen rates would kick in.

Everything in here also had a bit more health than the group is used to dealing with. Granted a lot of everything we were killing was red and a bit higher level than we have dealt with up to this point so far. It’s just a shame it was giving less experience than easier creatures we could have been killing elsewhere. All of these factors made this place a nightmare which would be almost as fitting as calling it the plate of hate. As I did quite hate this place. It is quite a shame as I would have loved to explore more. It has quite a dark and fun theme overall to it. It has to be almost ten years since I’ve last stepped into this zone and perhaps another 10 before I do so again.