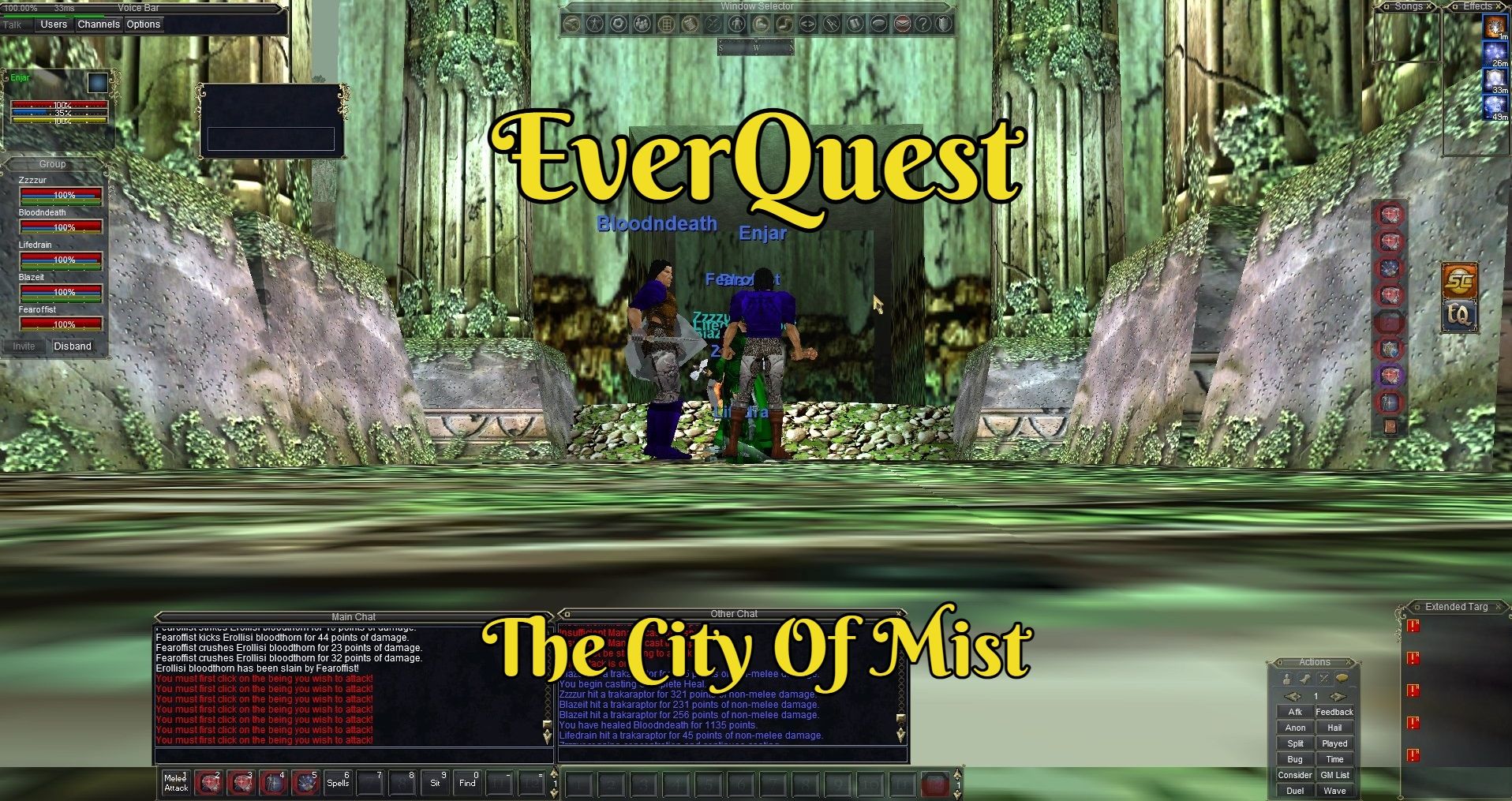 The City Of Mist is another place I’m certain I have not been to. It would be a bit of a long run to get out to it. It would however be quite worth it as I got quite a few upgrades gear-wise while there. There was also quite a bit of fun to be had. The first area we would need to cross was The Field of Bones. For most of the journey, there was quite a straight shot. Thankfully I did not need to walk around or any pits or other areas of trouble. At our levels though I would not have expected much of a fight. Once we were in The Emerald Jungle it was quite a long walk to The City Of Mist. It also looked like it would not have been a bad area to do some killing in either for our level.

There ended up being quite a steep cliff we had to get down from near where we exited Field Of Bones. This then led us into a wall that had some gaps in it. Finding the actual entrance into The City Of Mist was not where we thought it was at first. As the perimeter around it is the City itself which makes more sense now thinking about it. 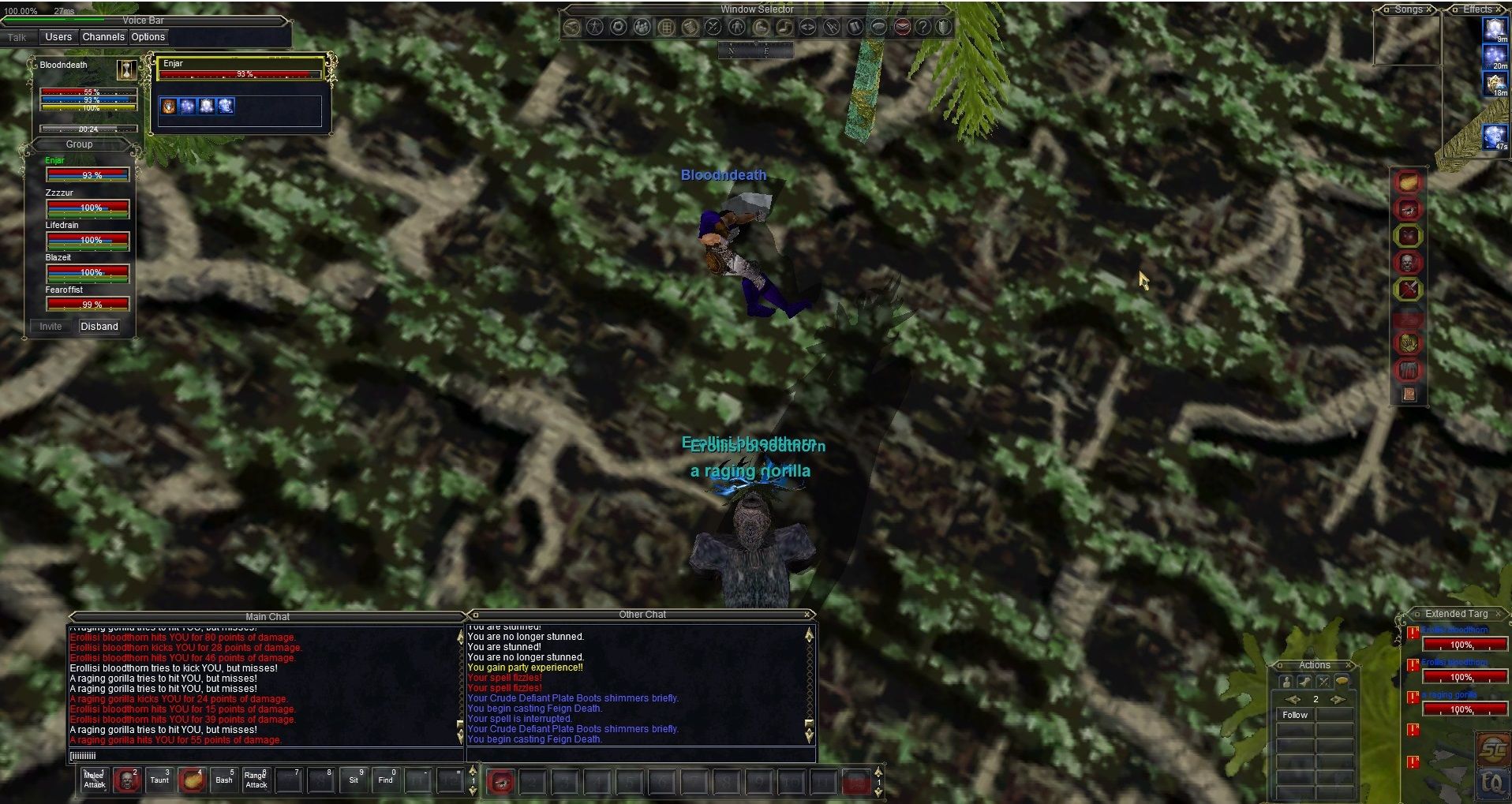 With how massive the zone was auto-follow ended up breaking leaving the shadow knight quite far behind. Thankfully he has his spell version of fake death as he ran into a bit of trouble along the way.

We did end up killing a couple of things along the way. Just so we were not dragging a large train across the zone. It also seemed better to deal with the issue now than later which ended up being a good thing when we did not find the entrance right away into the city. While the City Of Mist is not a massive zone it is quite jam-packed with a lot going on. We ended up camping at a few different spots and rotating around a little bit waiting for respawns at one point. With some of the camps, I’ve marked them in red circles on the map.

The first area we ended up camping out ended up being a smart play unknowingly to us. There is a chance for a Captain of the Guard to spawn which after killing a few we did get. He drops a key required to get to the higher level of creatures in the zone in the back. 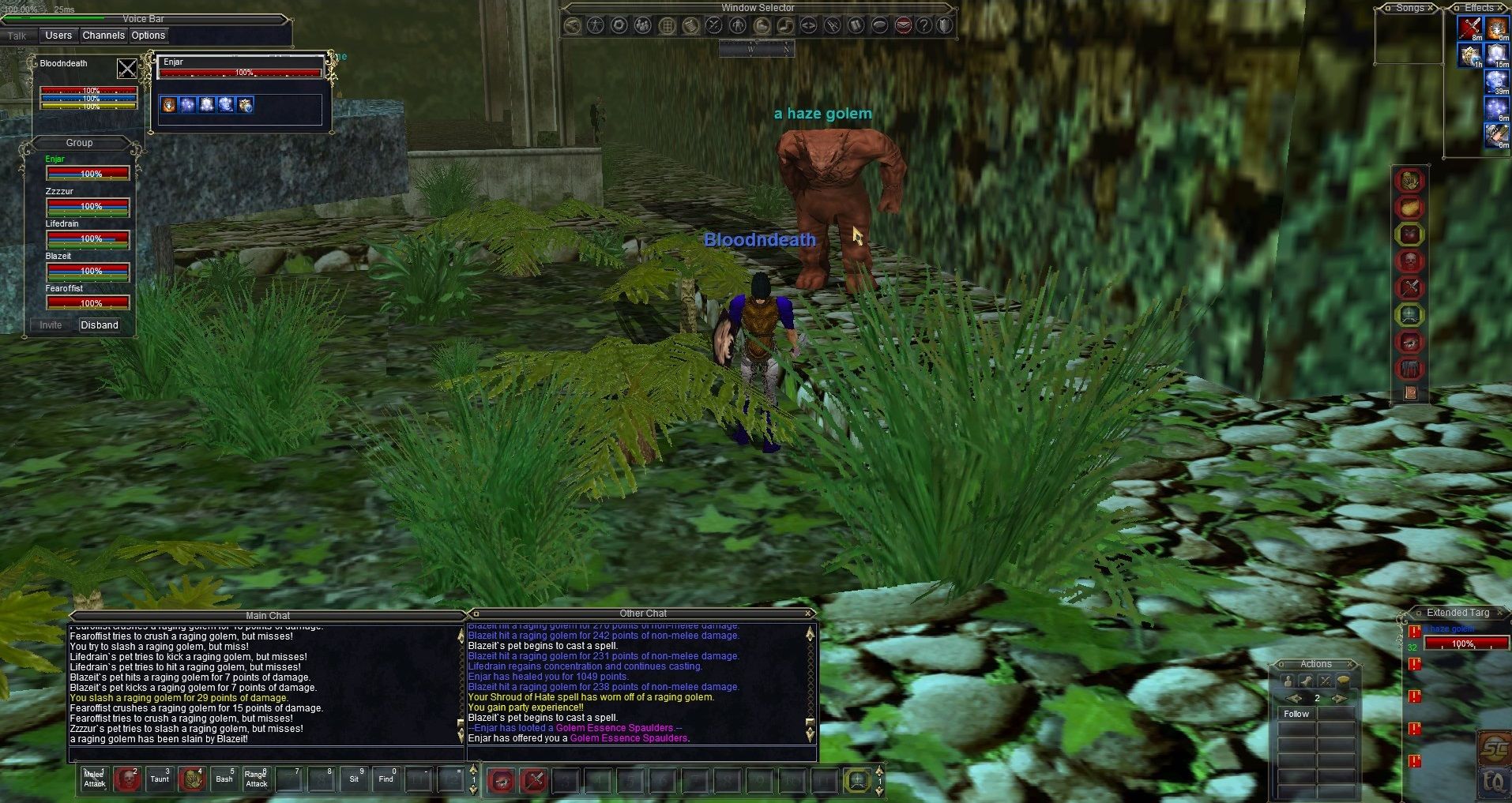 There ended up being a couple of different areas I ended up pulling from. Each one does not have enough to keep us busy for long. I wondered how many groups could even be in a zone this size without stepping on top of each other trying to get a few extra creatures to kill per spawn cycle.

Granted, we did have a lot better gear than they would have back in the day. So I’m sure we are clearing at a much higher rate than this zone was made for. For how old this game is I did enjoy all the little details they put into the homes in this city. You had moss, plants, and a few different textures. I sometimes do miss this old-looking style of games.

After a few level gains and looting some new gear, we decided to try clearing deeper into the zone. The creatures were giving us less and less experience and we were killing them at a rate I was getting a little tired with all the running around I had to do for pulling.

I also wanted to see what the Stone key we looted off a Captain of the Guard was for. It did not seem to be for any of the buildings around us. So deeper we went.

Along the way, we would camp for a few spawns as I explored the best I could between kills. I was hoping to find some names for us to kill. 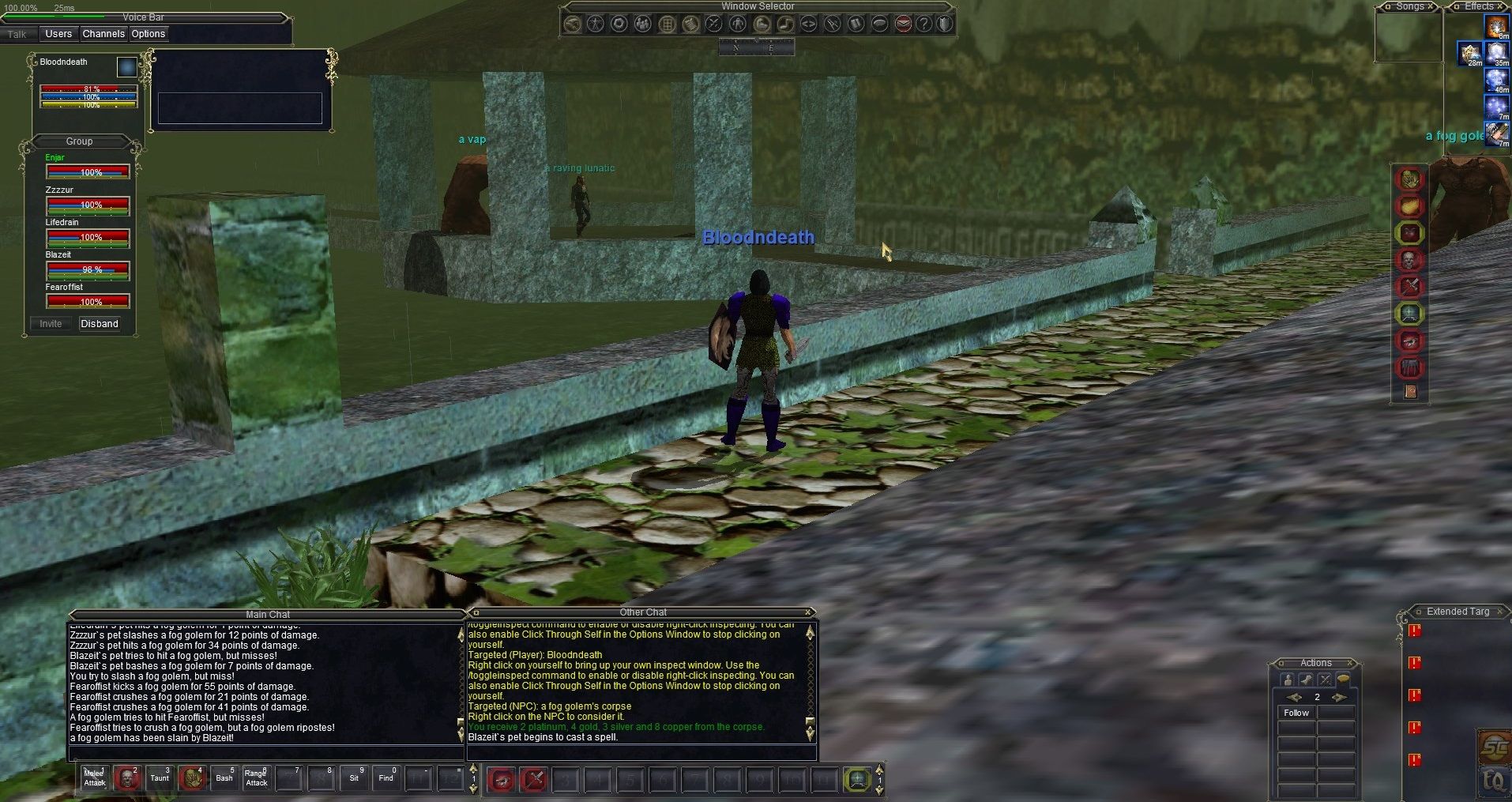 Over time we ended up at this little water feature with a bridge connecting to a house. I had a feeling the door to get in there used the key I found and I ended up being right. I took it slow and pulled a little bit at a time. 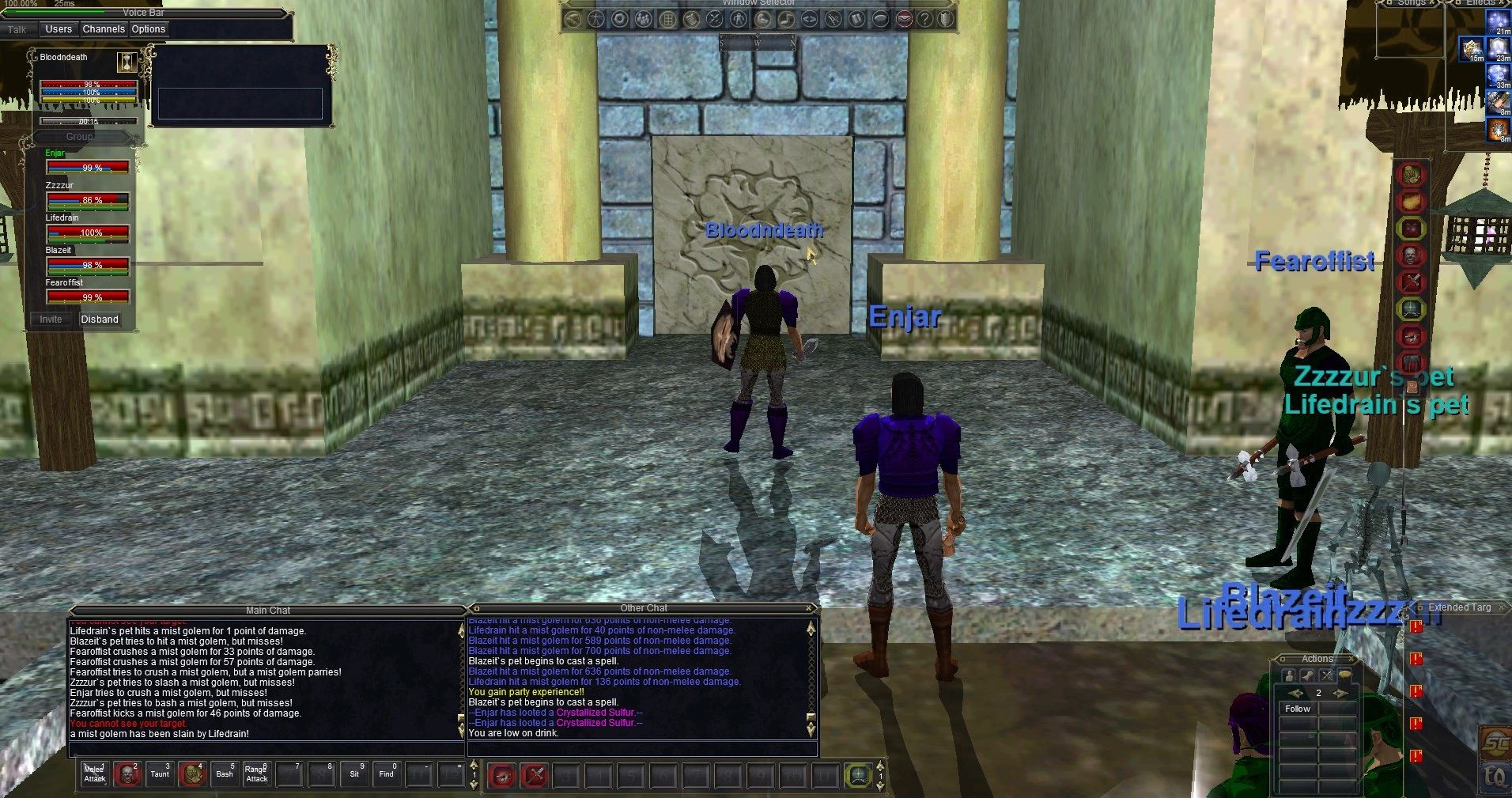 Once we got up to the door I opened it and there was a lot inside that building to pull. There was also a named creature. Along with that came our death. I was not able to get the cleric out of the zone alive. I also was not quite sure where he got killed while I attempted to flee after the tank and another DPS died. As a result, we ended up getting a corpse summon and resurrect in the guild lobby.

We would later return and re-clear back to the spot we got killed at. This time ready for a named that spawned another named when killed. Which unknown to us then spawned the real named that was quite a beast to take down.

I’m not quite sure how we managed to survive for so long. I was expecting our group to just run out of mana and that be the end of us. At some point I was expecting adds from respawns that would wipe us out. 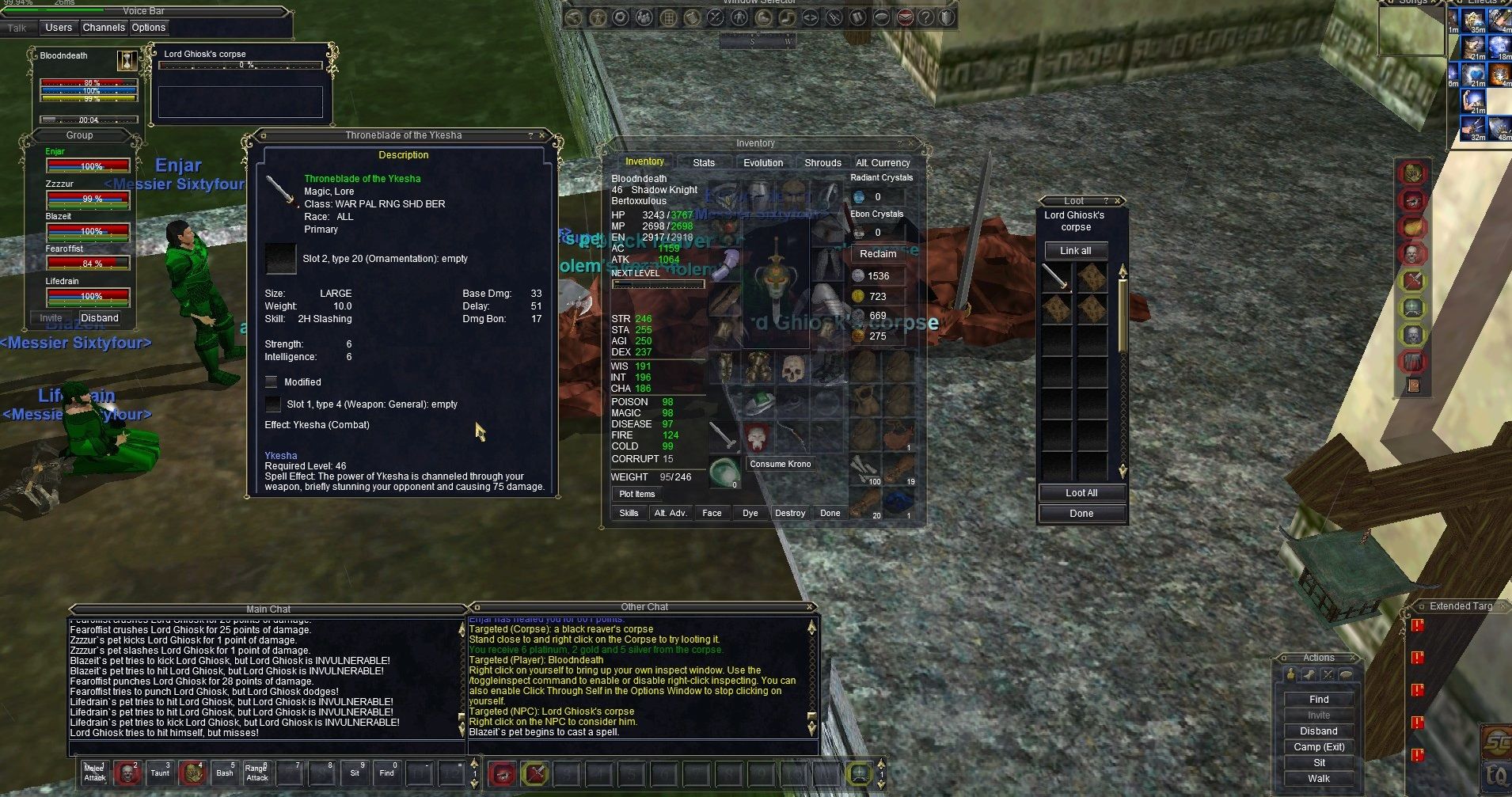 We managed to kill him in the end. He dropped a sword and some quest items. After that, we moved into the room and found a back door that led us up some ramps.

Before going up the ramps there was an elevator. While it said it required a key it was not the one I was holding. We ended up searching high and low in the city killing everything we could. We never did find another key that I would assume was for that elevator to take us to some unknown parts.

While the back of the zone had some higher-level creatures to kill. They were in quite small numbers and spread out between each other. We ended up having a moving camp to the different parts that went around in a connected square. While I was not the biggest fan of always having to move camp every couple of kills. It was at least better experience gains than we were getting anywhere else. We however did not find any of the names to be up in the back. The one we killed to get back there had also not respawned before we left. This would end up being a zone we returned to a couple of times. While it was quite small I rather enjoyed the change in scenery. We did end up trying another place to level in between some of our runs here. It was however quite horrible. I’ll be talking about that place next.