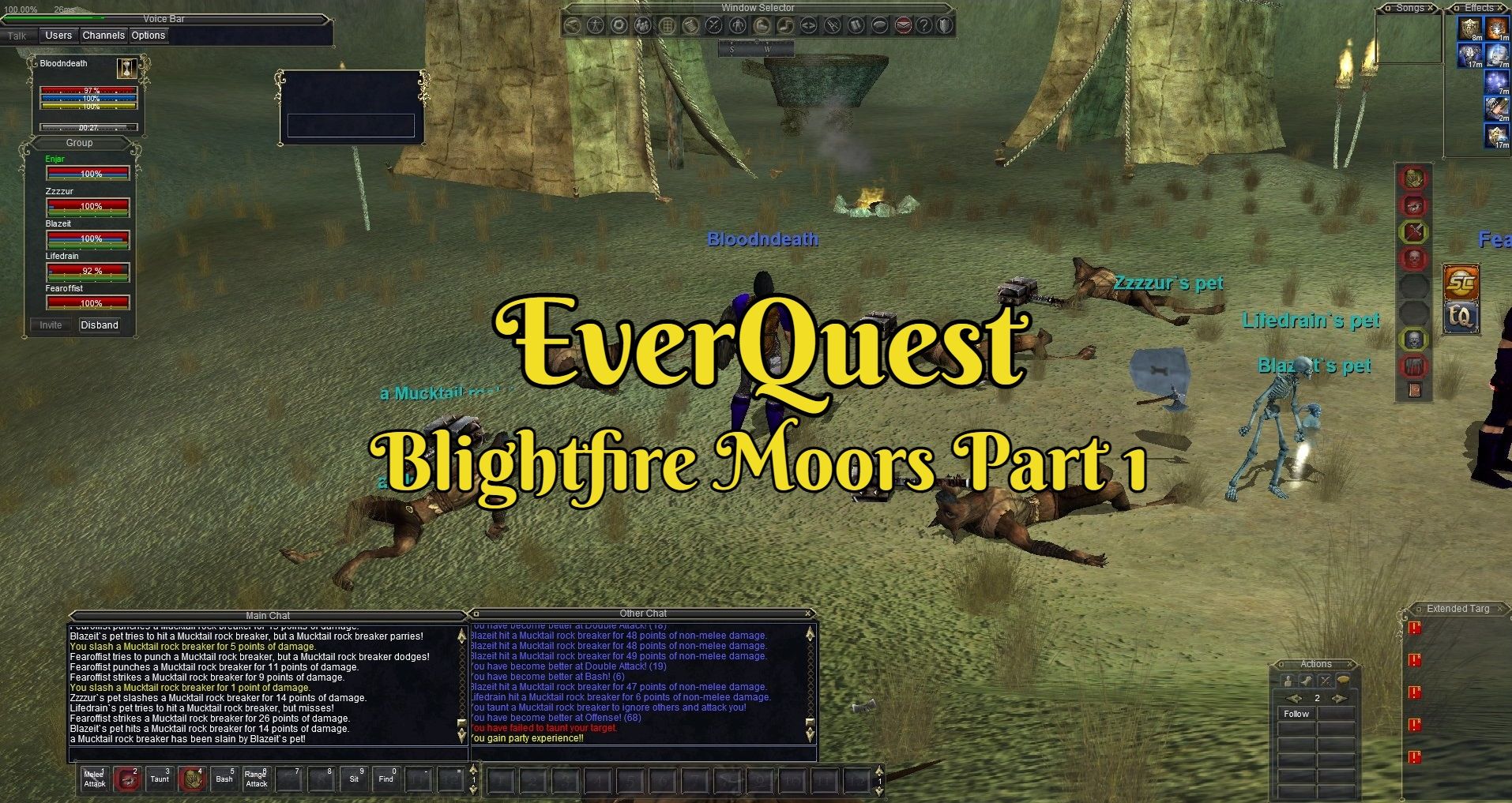 Blightfire Moors has a couple of different areas I want to check out for how the experience and creature density is. Before we could do that we needed to get back to Planes of Knowledge to do some spell shopping. Then it was off for another slaughter fest! After safely getting us back from Kurn’s Tower it was time to sell and go on a massive buying spree in the library that can be found in Plane of Knowledge. I had some healing and buff upgrades that I was needing to get. With how old a game like EverQuest is there were a lot of spells to buy including a bunch of other types of spells as well.

Thankfully I had enough platinum from selling all the loot I had acquired from my last adventure to get new spells. Kurn’s Tower also dropped a lot of raw currencies as well which is always a nice bonus. Nothing of high value dropped that we did not already use for ourselves. I then spent a few minutes learning all the new spells that I could on the cleric. I had almost filled the eighth page of the cleric’s spell book. I even had enough to buy the next couple of levels of spells for when I would need them while out leveling.

I then spent some time redoing my save spell setups. You can save and set up presets to load up. This is always nice when you need to switch from primary healing to redoing all the buffs in the group. It is also just nice to select “gate” or “resurrect” as a preset to reload one spell slot instead of fumbling around for it in menus or the spell book that is starting to get quite large.

Once the cleric was done I went down to where the spell vender is for shadow knight and repeated the process on him. He had a lot fewer spells to get. It was however nice to have a couple more spell options for him to use for pulling and doing a little DPS when I could on him. Our next place to give leveling a try at would be Blightfire Moors. The way I at least know how to get there is through Crescent Reach. This puts you right next to the zone for Blightfire Moors. Leaving this travel to the next area rather uneventful and quick.

In Blightfire Moors there are going to be a few locations we end up giving a try and testing how the experience gains are at. Some of these spots we would camp for a short while before exploring. While others would be us coming back to hit it yet again. I have marked the first several spots in a dark circle. Blightfire Moors is a decent size zone so not all the spots we would be going would be shown at first glance without zooming the map out a bit.

Before heading any further into Blightfire Moors the group took a moment to buff up. Since at this level I can stack a few different buffs on top of each other. It took a couple of full bars of mana to fully buff up the group on my part. I look forward to the day I have group-wide buffs and they are powerful enough that you can no longer need to stack a bunch of buffs together. The first camp we gave a try for a short while was just south of where we zoned in from. It was filled with moss vipers and giant bog rats. Since we had stayed in Kurn’s Tower for so long this first camp was a bit too easy and the experience was a bit lacking. 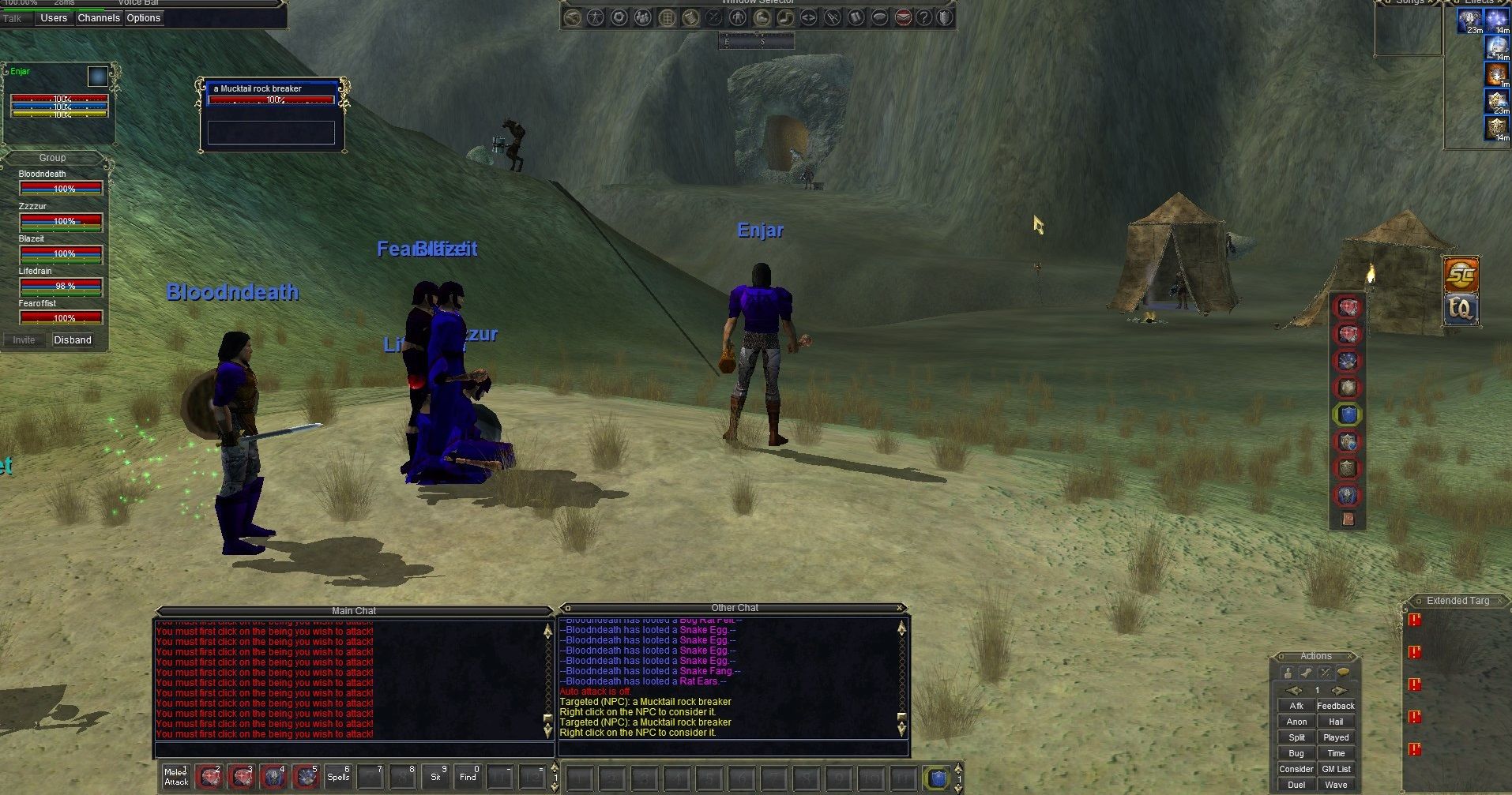 As a result, we ended up moving up to camping near some tents next to a cave. There were a few Mucktail Rock Breakers to pull from. Many of them were at least equal level to the groups for the most part. Providing a lot better experience than the vipers and bog rats we gave try farming at first. Thankfully there are a lot more Rock Breakers than just at the tents spot around the area that I could pull from. After a little bit more leveling we ended up clearing out this area a little too fast and needed access to more things to kill. 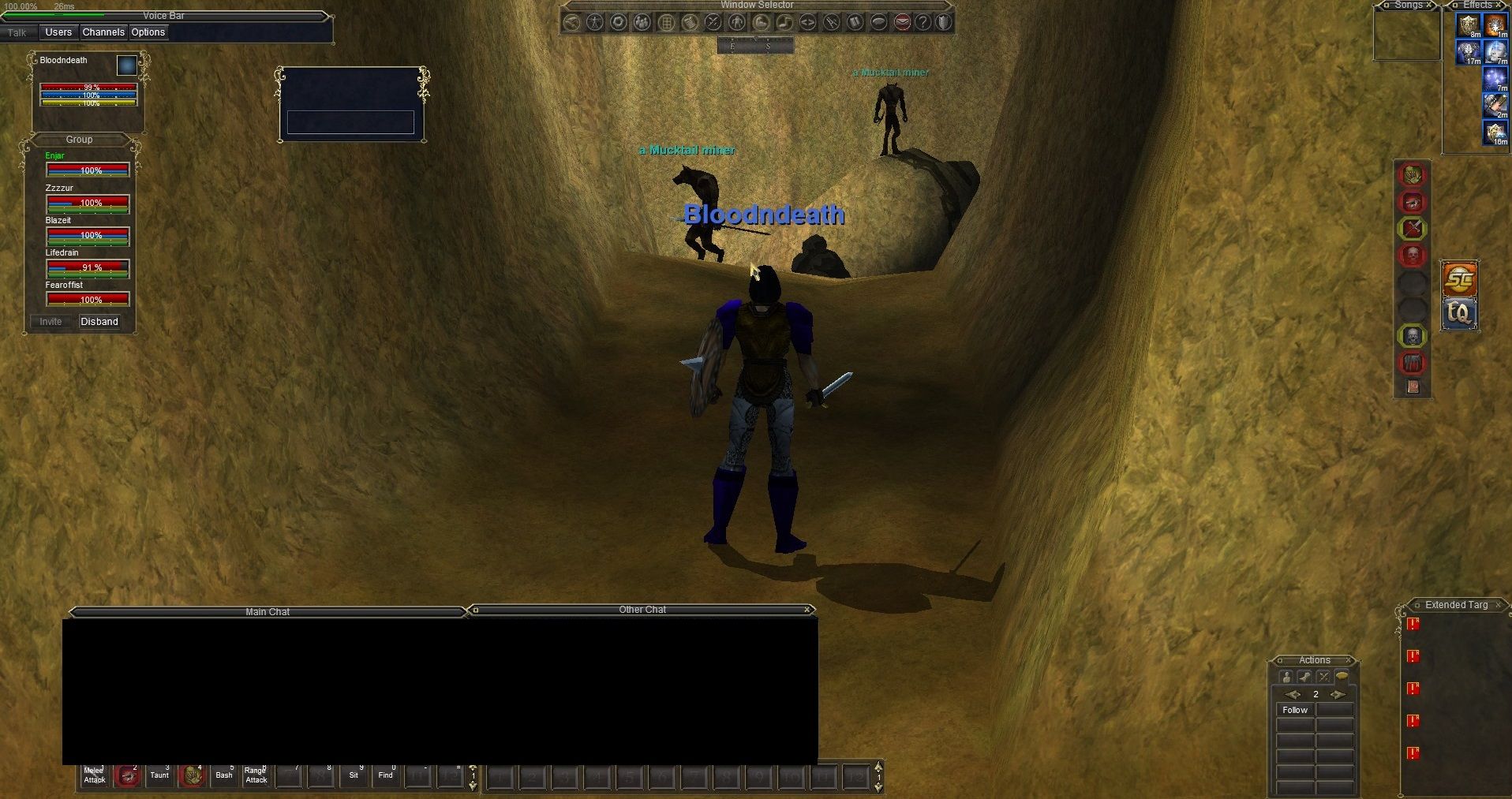 I ended up moving the group up into its first cave. Outside of a wondering spawn that we would make quick work of. This gave me a bit more easy access to a couple of higher-level spawns within side the cave.

I would also go out and pull two or so Rock Breakers to give us more action in the camp. More times than not one of the DPS would get aggression when the creatures were getting low on health. Instead of trying to fight for it back, I would just start heading out for the next pull if It was almost dead.

In a more ideal setup, you would have a pull always attempting to have an incoming with another creature as the current one gets killed off by the group. Since I’m pulling triple duty with playing a cleric for heals and the shadow knight as the tank/puller that more times than was not an option.

That kind of well-oiled machine of a group also takes people who know how to infer the needs of the group before acting. Back in the day, I had quite a lot of bad pullers that were over overzealous.

I use to run with high-end raiders back then. The kind of people who would have server first gear if not very close to having it. Most of the time we have an empty slot as we did some insane grinds taking up camps sometimes for days on end.

You get the wrong kind of person into those kinds of groups they either get nervous or think it’s their turn to shine as if they are trying to impress us. That would usually mean pulling and back then I would be in groups that could handle it.

What everyone would hate back then though is when the group is getting close to needing a mana break. The puller would go out not reading how the group is doing and almost always bring back 3 creatures and not even attempting to spit them. Because they were in a party of “ubers.”

While yes the group would survive. It usually meant burning everything we had to not wipe. Which left the group quite wipe open if someone attempted to train us for our spot. Most times we would just laugh local and thank them for the free experience when people got tired of us staying in a camp for a long time.

Since I don’t have that kind of gear for my characters these days. It’s kind of nice being the puller. I know how much mana the cleric will need to get us through the next situation. I’ll also know what is on cooldown for both the cleric and shadow knight once we start to get some better stuff. 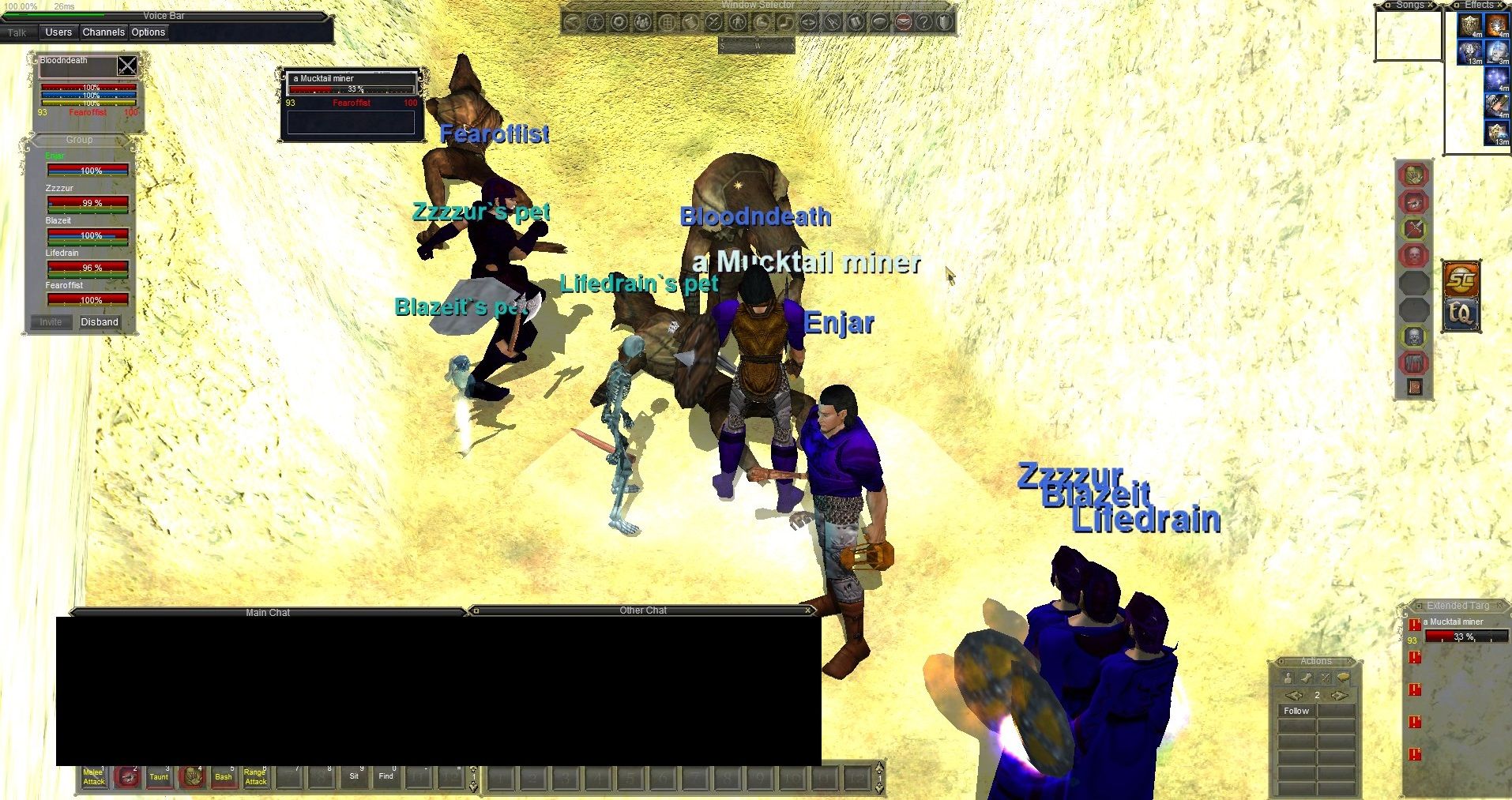 We ended up making more quick work than the cave and surrounding area which I was expecting. While this was great when we needed mana breaks. It’s also nice to not have massive downtimes either unless people need to go on break.

In the next post, we will be trying out some other camps in Blightfire Moors. It has been rather nice to take things at a slower pace in a group than back in the day. There used to be some wild and insane times back then.