I’ve been meaning to return to this game sooner than a year and a half. That is just how it is sometimes and thankfully it is quite an older game so it’s not like I’ve missed out on much. I have decided to start over again elsewhere making some other changes as well.

Since I’m starting over elsewhere I thought why not give dual boxing a try. I have a tiny amount of experience back in the day from playing a shadow knight while boxing. With one of them, I can relearn how to pull, it can tank, and do a couple of other things if needed. 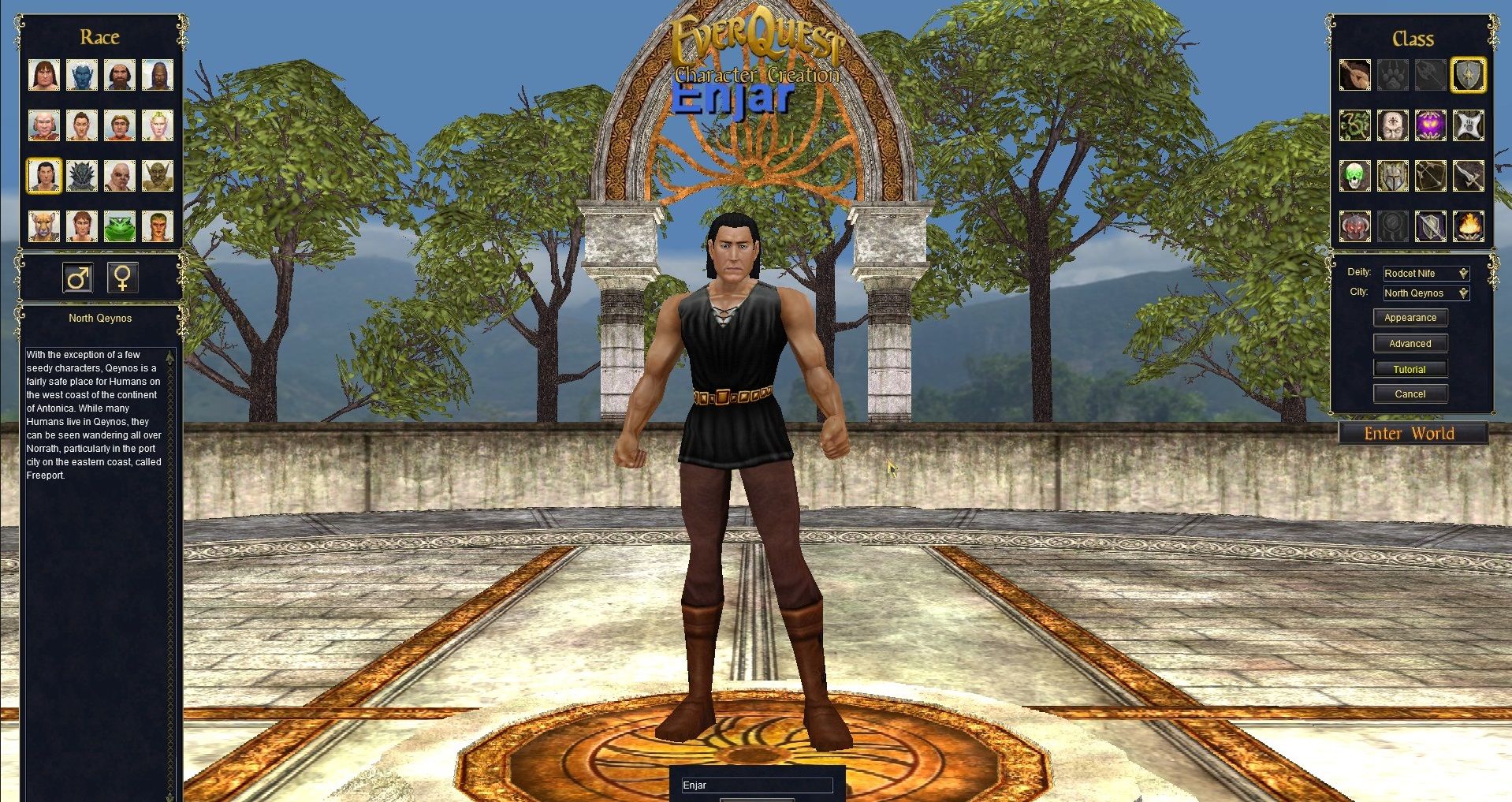 I will also be playing a cleric. They can take a hit if needed when things get dicey. They can also out heal anything and being able to revive the tank is always a plus if I have to choose between trying to run. With o only get one of the two characters getting out alive. The shadow knight can sacrifice himself so I don’t have to run back to revive both characters.

If I end up not liking the shadow knight I will at least have gained at some point a few levels on the cleric. This will speed things up quite a bit and make it a bit easier if I end up switching to a different class.

I’m hoping to try to be the healer and the tank is not going to be too much. It would be one thing if it was a DPS and something else. I did also on very rare occasions back in the day triple box a cleric, shadow, and a shaman. This gets confusing but quite a powerful combo as well. However, I do love enchanters more just for their mana buffs. 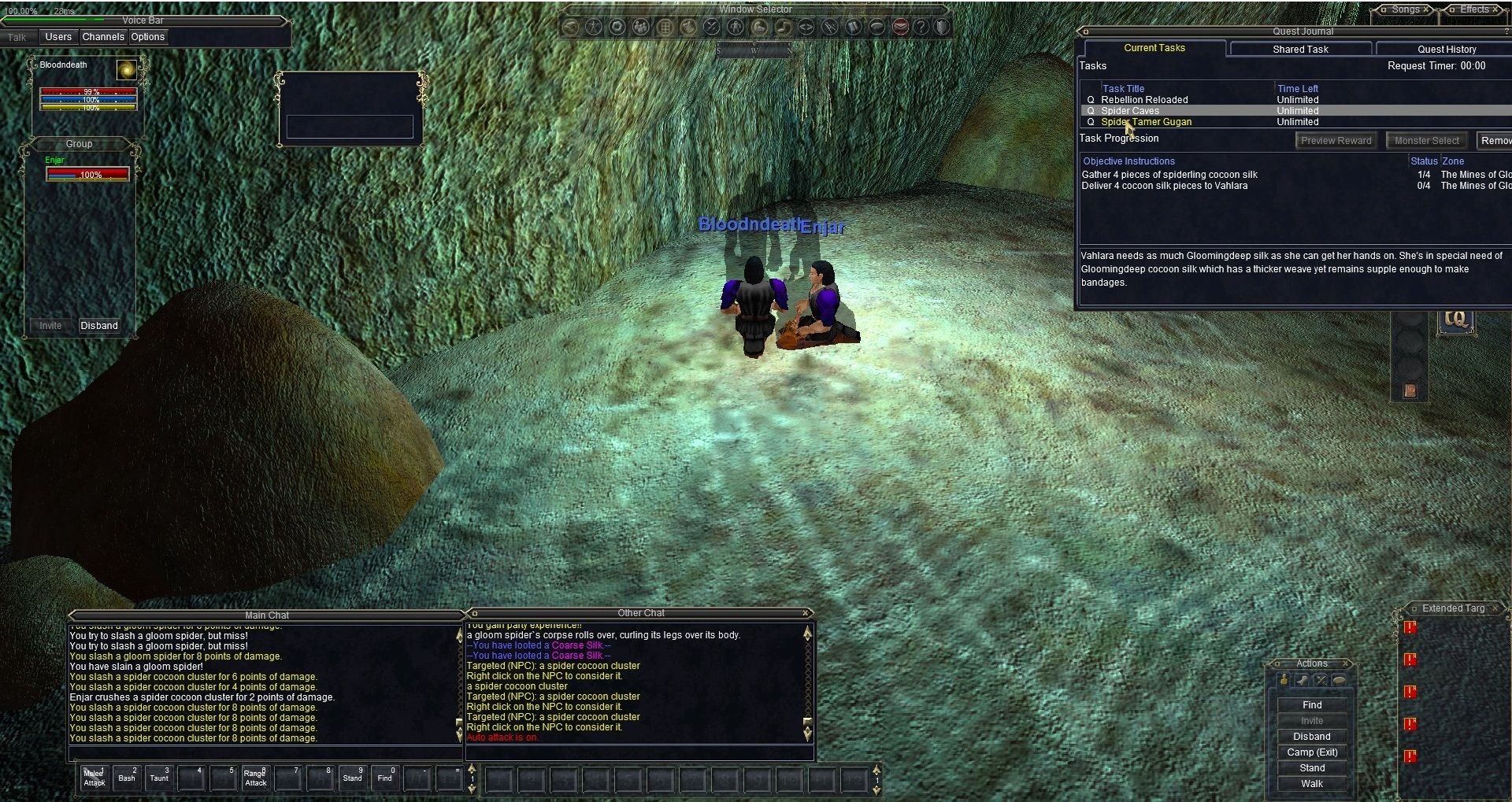 At some point, I need to re-arrange my UI. Right now it’s just the standard ugly mess all over the place. Not like it will be much better. Despite all the med breaks, I just could not be bothered. It was quite a relaxing weekend in the mines.

In a lot of games, I’ve always found the tutorial starting area to be rather boring after running it once or twice. I guess the beauty here is I can always just leave when I feel like it. It is a decent enough zone with a few quests and creatures that you can solo or need to team up with to defeat unless you out-level the place.

Early on without the ability to snare or root things did get a bit complicated when they start to run. Both of the classes don’t have much damage for the moment. I also can’t run with both of them at once and hit the creature running all over the place.

Mana is also quite tight for the time being on the cleric. So I rather avoid having to nuke even after he was able to use damage spells. It however is better than getting a giant train on you from something escaping. At least I can nuke with the cleric and run after something with the shadow knight in the short term. Long term this won’t be an issue with some other spells I’ll be getting on the shadow knight. My tanking skills so far are not that great. For a while, till I skill up the taunt there will be quite a few failed attempts. Along with DPS getting the upper hand and getting smacked in the face by the creature for doing so. Thankfully the cleric can keep most people alive even on harder creatures at this level. That is till he runs out of mana yet again.

Thankfully later on I know the shadow knight gets a few spells that tend to help with tanking. If I recall when I use to box I would use DoTs to pull with or a lifetap if I needed some extra health to get me back to the group. It was also a good way to piss something off to keep smashing your face in for a while. It was somewhat funny getting a link death (LD) while playing. I remember back in the day it was a struggle for my computer to a dual box and if I had to get a third character online I would have to log out one to speed up the zoning process. Nowadays it is nothing for my computer to handle I assume c a few accounts if needed. It seems however that is not enough to safeguard me from getting an LD. I had almost forgotten what a pain the behind the spell system is in this game. You have to buy the spell. Learn the spell in the spellbook which takes a short while to be learned. You then have to load up one of eight active skills slots one at a time which you also have to wait around for. Then you can move that active skill over to the hot bar.

It took me death or two of a few run-away creatures to remember to save my spell loadout. That way I don’t have to redo my hot bar every time I get killed. Thankfully after a few levels in I should be getting close to having a better chance at dealing with creatures once they decided to run when they reach low health.

Once I get some money I’m just going to buy the next few levels of spells for my two characters. That way I can go on some great adventures and not wonder if I’m missing some key new spell after leveling up that would help out a lot.

While Mines Of Gloomingdeep is not a hard place and even easier once you are boxing it. I remember back in the day when I was on my main account with money to burn I’d just load up an alt with a bunch of food, potions, and gear. That alt would make quick work of things even by themselves. Which I have more than taken for granted how easy it made things. Always fun when you enjoy some of that old-school nostalgia. Next up I’ll be heading over to Kurn’s Tower for quite a few levels. It was never one of the main areas I would go level up at. I however recall it being a rather fun place to be.