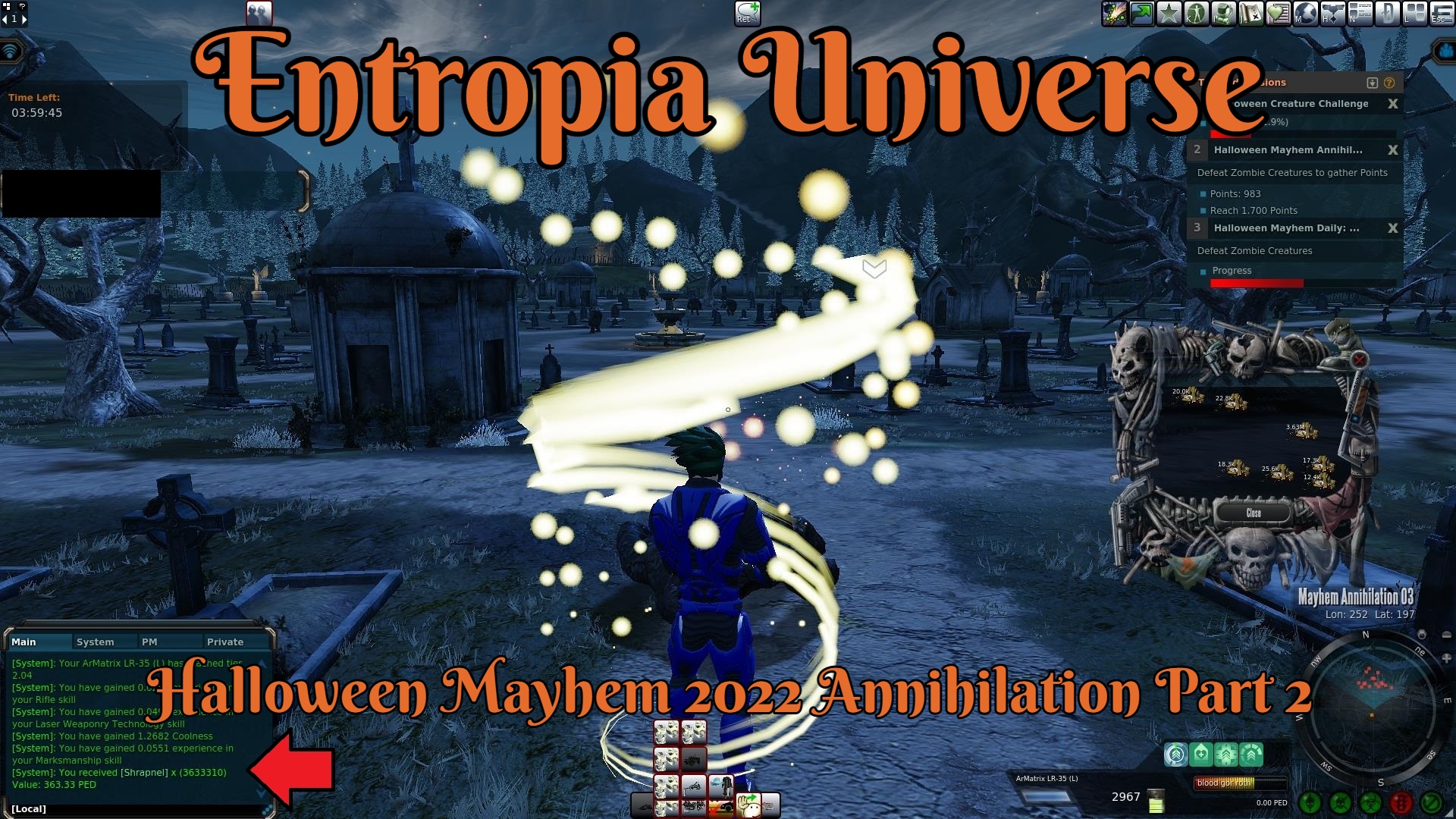 I was back at it again quite early grinding. This session ended up being a bit different than the first. I ended up earning quite a few fewer points and finding fewer boxes and tokens. The loot however was better TT-wise.

I was hoping to be quite close to reaching the first stage of the Halloween mayhem Annihilation mission. It appears in my first session they were handing out 100 points like candy and I ended up getting zero this time around.

At best I believe I noticed getting a couple of 50-point kills and that was it for any large amounts. It is always a bit hard since they don’t tell you unless you get some high point amount. While it would be nice to get a 2500-point kill. One can only dream as that would save quite a few hours of grinding.

If I’m not mistaken at the rate I’ve been going in Annihilation 3 it will take something like another 170 hours to max out the mission. At some point, I will be running a lower-level one to compare my results. This time around I went for another Annihilation 3 instance and I’m rather glad I did.

One thing I continue to notice is the zombies don’t global often at least for me at these levels. They have at least not been 50% losing sessions when you are not getting something big. The losses however started to add up. Not even half an hour into the run I ended up getting an 81 PED global. While shrapnel is mostly all you will be getting here. I do hope one of these times it will be an (L) piece of armor. The only way I’d ever have a set of Mayhem (L) armor is if I looted it myself. The stuff is quite pricy and I don’t even want to know what the unlimited pieces are worth that you can get from the Mayhem vender.

There is also a bit of a funny story here. I was pouring myself something to drink when I clicked on the loot key and my screen lit up with the globe. I went to read what I looted in the loot window and I misread it thinking I got something much bigger than I did. So I almost spilled my drink all over myself before realizing it was nothing that insane. This was rather funny and I was somewhat laughing about it for a while afterward.

Up till this point, I was somewhat happy with the number of points I was getting. Somewhere between this run, I swear I had almost an entire hour of just a handful of points if that. Gaining points was not the only thing that came to a grinding haul. Finishing off up to rank 9 of the codex for Halloween Creatures I did rather fast. It was at this point the skill rewards started to get a bit better. It also started to get exponentially longer to get to the next rank. At least gaining that much perception gains increase all my looting professions. While I did not need the hit profession increase for things like my laser gun skills since the damage profession is lagging behind it was a nice bonus to have.

I’m someone who usually hunts animal type of creatures in the Entropia Universe. These Annihilation zombies in the instance are considered mutants and my looter level for those is about 10 levels behind. Since I’m running 50% skill boosts I ended up gaining a few levels of the Mutant Investigator profession.

All the bosses I ended up killing during this instance run ended up being quite bad. I can also say since I’ve stopped using reload pills and it was getting quite early during this session I was far behind trying to get a boss every half an hour. I still managed to get a few they were just not great.

Thankfully I did not need the bosses to be great. An hour into one of my runs I looted a 363 PED kill which can be seen in the screenshot cover of this post. This would more or less help make my current run at least break even. I had a decent feeling if I could get one more global there was a chance I could end up covering all my losses from before and perhaps be slightly up.

Nothing happened then for quite some time I got another rank on the codex. It is tempting to be taking direct evade skill or some of the other rewards for finishing rank 10. Alertness however here was the better play since I got looting and defense skill increases to count towards that profession.

My alertness skill is also low enough that the lower percentage of the total that counts towards those professions has quite a huge impact regardless. The higher an individual skill is the more it takes just to move it slightly. You can also see in the screenshot my total points were not that great this far into things. I was at least hoping to have a couple hundred more points at this point. At least the loot was making up for it. I then went a while again with not much going on. I then got another global this time one for 86 PED. Again just more shrapnel but it’s not like I don’t need the stuff to keep shooting! A little later on I would also get another rank from the daily defeat zombie creature mission I had. The rewards from that were starting to get nice as I got 15 mayhem tokens out of it. This ended up being the bulk of the total tokens I collected from this run.

While I’ll be saving all the Mayhem tokens I get. At some point, I need to break down what the cheaper consumable items are selling for off the Mayhem vender once they restock those. You however can’t sell them on the auction house and instead have to do direct trade or own a shop which I don’t have. So the price of those consumables is a bit hard to work out and find a buyer for.

I of course would rather have better things from the Mayhem vender. It will however cost a lot of tokens. That includes for those higher tier items a couple of Rare Mayhem Tokens which I did not get any so far this entire event or during the Easter event either. A couple of times I did wander around making sure I was clearing out at least each zombie. I was getting quite a few perception gains which I think might have been from just a zombie having a Mayhem token or box. I however wanted to make sure.

Normally when I would get a perception gain I would take a screenshot so I could see where everything is on the mini radar. I would then kill them one by one and cross them off in the screenshot. This helps ensure you are not killing respawns.

The issue is these zombies move around quite a lot. They don’t sit still and there is no way I can kill them fast enough. So I just try and do my best to clear out as many different ones as I can.

It is also rather nice to move around in the instance for a while. At one point I found a few zombies behind a building and I must have racked up 50—100 points off those alone. While that did not help for the lack of points I was getting that much. At that point in the run, I was happy to just get any.

The rest of my run was quite uneventful. I did not even take any further screenshots. With the three global I ended up getting during this run and that one being decent. That puts me slightly ahead so far in running this event. That is naturally not including the insane amount of skill gains; along with, tokens, and boxes I’ve looted.