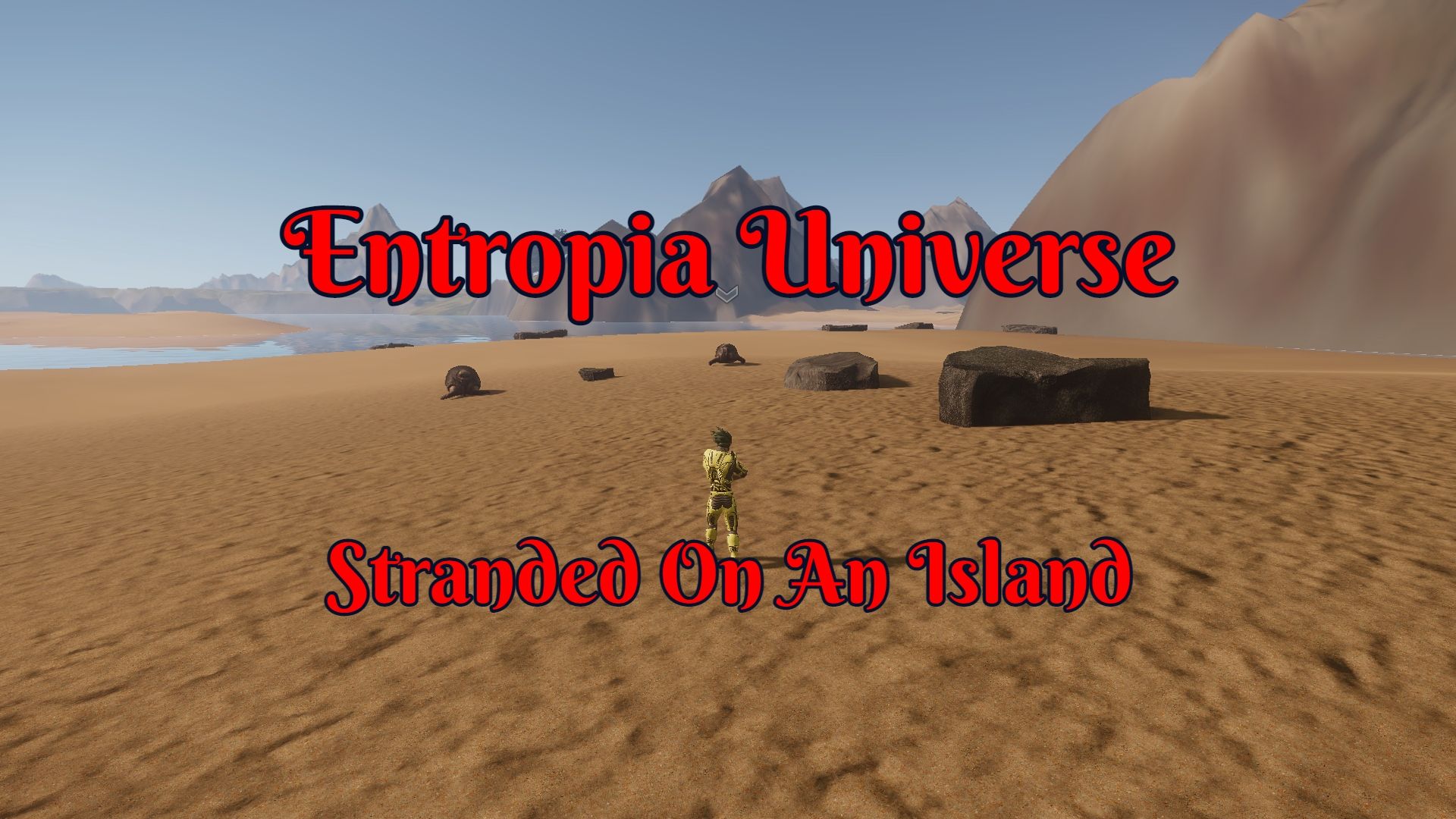 It’s not every day you mess up so badly in a game like Entropia Universe you could be screwed. One thing that can happen is getting stranded at a location. There was a series of events that lead me down to quite a possible bad situation. I found myself on an island without fuel to fly away in my ship. I had my main gun break. There was also the situation of highly aggressive creatures on that island.

Naturally, a story like this would start in an area of Calypso that I have sworn off from ever returning to. The chain of islands with Fort Victoria on them. It has a lot of mixed creatures making it hard to target farm for something without a bunch of unless kills and the missions there mostly grant combat tokens that I don’t care much for. I however was on quite the mission finishing binge. I had pulled up a site that listed a huge amount of the missions on planet Calypso and I was going down the list one by one seeing what ones I was missing.

For a lot of them, quite a few of the missions are no longer in-game or the starting NPC is not where it should be. So there was a lot of flying around, burning oil, and doing some missions on occasion. I have something like over 300 missions finished in the game with the bulk of them being from Calypso. So I was expecting this to be the case.

I finally came across one mission on the list that looked quite easy to do. After digging into it further it was part of a large mission chain. Along with having what I could only assume a bunch of other missions in the area since I mostly avoided those sets of islands.

In total it looked like I could knock out 15 or more missions in a couple of hours. I would be hunting a bunch of creatures I don’t usually and I did not have the first rank of their codex’s done either. On top of that, I’d be giving a different region and island clusters in the area a more fair chance since I have not been on them for the most part. I was also partway into the mission chain anyways. Back in the day, I got up to a part I needed to kill 50 robots in an area. I don’t usually hunt robots and unlike a lot of other things you don’t use evade defense; instead, you use doge. On top of that, I only have some very low-level gear for hunting robots.

I thought at first my plan to knock a bunch of missions out was going to be foiled. I suddenly recalled why I gave up on the mission I was on. There were very high-level robots and even with the gear I have on I could not heal fast enough once they got in range of doing damage.

I had something like a 50% chance of killing one without getting killed. This would normally be a no-go. Even with the biggest gun I had using it was still quite a high-risk thing. However, there were some low-level robots mixed in that I could tank and kill. It did require me flying around and picking them off.

Since I had to fly around a bit and wait for respawns. I would clear out what I could from one side of the tiny area I was in. I then would fly to the other side. This usually required me to land right on the edge of a cliff to avoid getting attacked.

In one of my rotations of the camp, I landed as I had been right on the edge of the cliff. This time however I was just a tad too far over the cliff. My Quad-Wing ship rolled off the cliff and splashed into the ocean once I exited the ship. Since I did not have a chance of recovering it manually I recalled it to my planetary storage. This will be important to remember later in the story. I did not think much of it at the time. I had another ship on me to fly around with. Along with some land options if I had to go that route. After some time I ended up finishing off that mission. The next one required me to go back to the same spot and interact with some rigs.

After that were a couple of filler easy missions. Go fly to a location and do that. Go on a transportation mission to the next area by flying there. That sort of mission and some of them even gave a tiny reward. While not what I wanted I was there just to get a bunch of missions done so it was better than nothing. 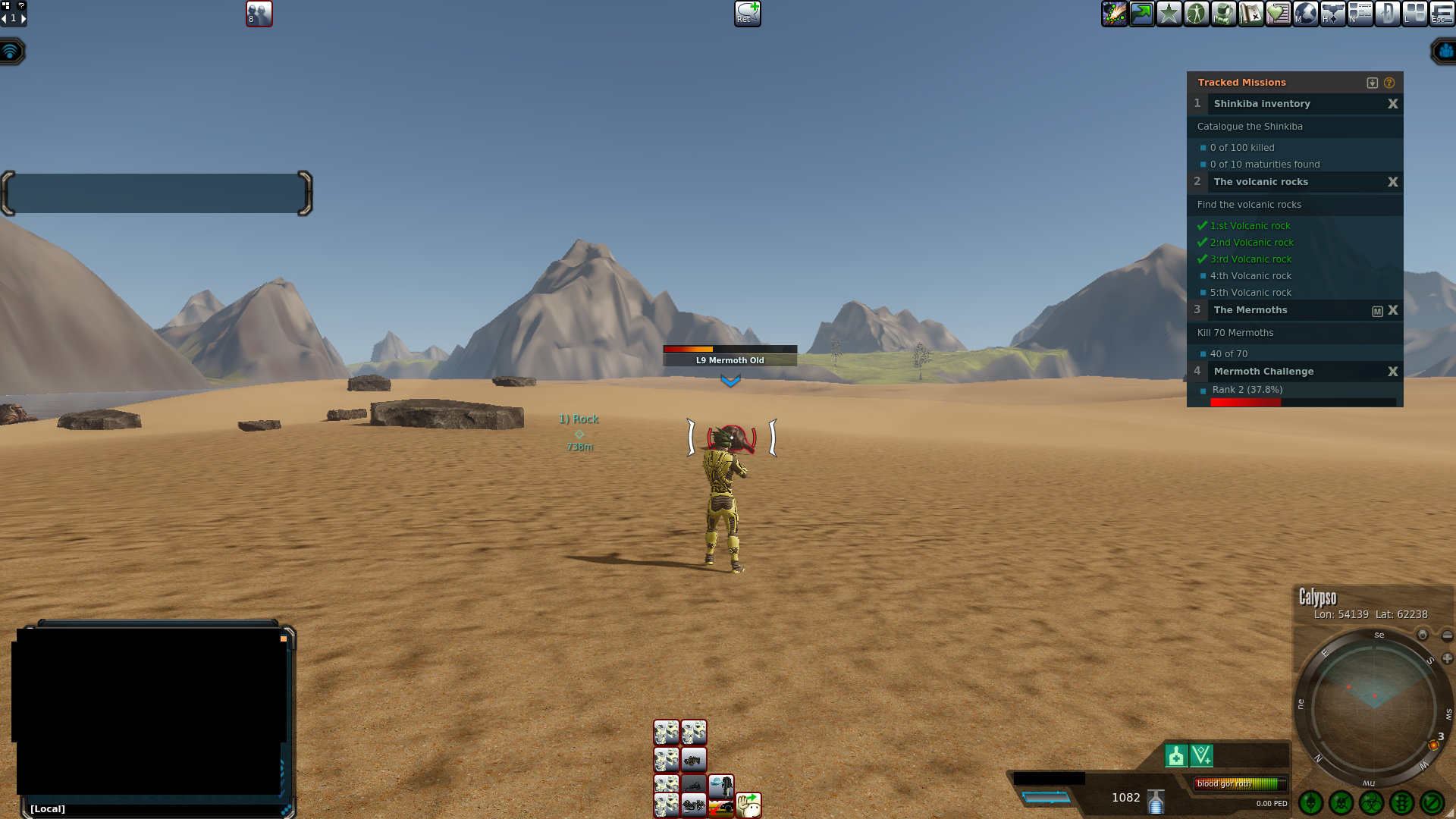 I then found myself picking up two missions. They ended up being in the same area. A small island that had some nasty things swimming in the ocean from the best that I could tell. I was not coerced since I did not need to go into the ocean for the mission.

I was hoping once I was done killing the robots that I could get away with using one of my other guns. My ArMatrix L-35(L) I knew going into this was getting low and would soon break. This next area was not going to have any of that though.

It turns out the Mermoth that mostly populate the island that I needed to kill have a massive aggression range. I would sometimes be fighting off three or more of these at once. On top of that, they only deal impact damage so the gear I had was only doing so much for me. A lot of healing would be required. Thankfully most of these Mermoth had 300-600 health. My ArMatrix LR-35 (L) was making quick work of them. That was till it broke. Thankfully I had an ArMatrix LR-20 (L) on me. It has a bit less damage and I would need to fly around a bit more and be more careful in the fights I would find myself in.

Besides the kill mission, I was working on. I had another one that had me going around finding rock locations. This island in general had me flying around a lot. When I got the warning that my ship was low on fuel I did not think much of it.

After almost being done with the location mission and having a large amount of the kills I needed to be done as well. I went to spawn my ship to fly off to another part of the island and that is where things started to go downhill.

A screen popped up asking for me to put more fuel into my ship. It was empty of fuel which normally is not a big deal. I had a lot of it in my Quad-Wing I would normally extract some of it and just put it into whatever ship was out. Yes, the very Quad-Wing that I had called to storage and never put back into my inventory.

I thought ok not a big deal. I have some other vehicles on me. While they are all land-based and I can’t drive off the island I can at least extract the oil out of them, right? Wrong. Turns out they had enough to run for a while but not enough for me to get a single unit of fuel out of.

Thankfully I carry around my F-105 for mining with me regardless if I’m mining it or not along with other tools I need. The mining finder can use universal ammo instead of probs. Expect I had burned through all my universal ammo and was using the standard backup laser ammo I had let which it can’t’ use.

I did have a decent amount of shrapnel on me. I could have converted that into universal ammo and used that. I however still had some probes on me from my last mining run. A fair amount as well. So I went mining when I could on the tiny island I found myself on. 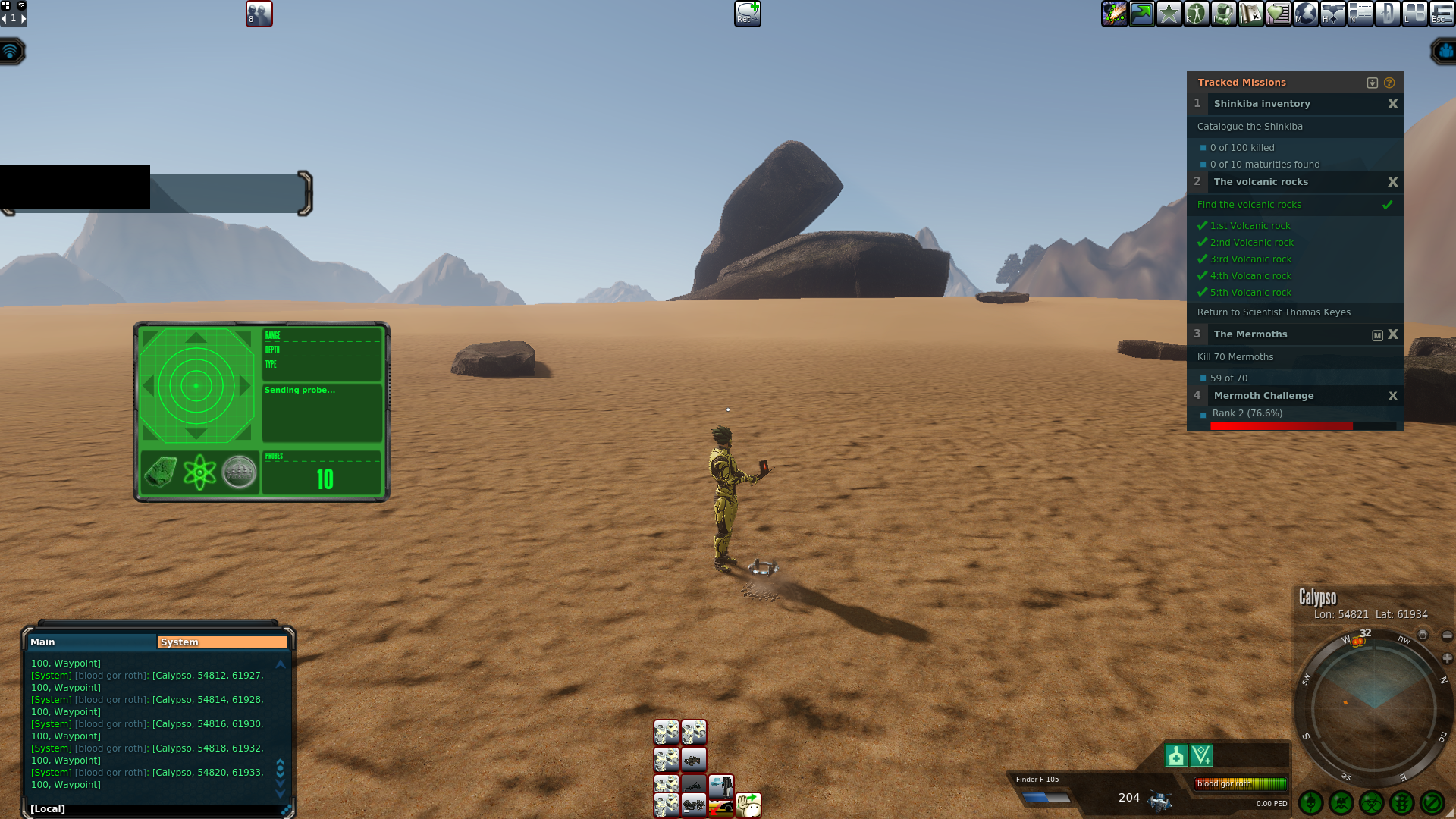 I only needed one single find of crude oil. I had what I needed on me to reprocess it so I could use it as fuel. Just one issue. While crude oil is massively common I had no idea if it could be found in this area. I also had no idea of my F-105 being at sea level and was searching for claims way too deep for this area.

What I do know is I kept coming up empty. I would have to kill a few Mermoth. Take a few steps forward and drop a probe that resulted in finding nothing. I then would repeat the process over and over again. I was starting to think this island was a barren wasteland.

I was eight probe drops in and finally, I got my first mining claim. It was however not crude oil. It was also right in the middle of a pack of Mermoth. I cleared them out and kept searching. My hopes were at least a little higher since I had found something on this blasted island. 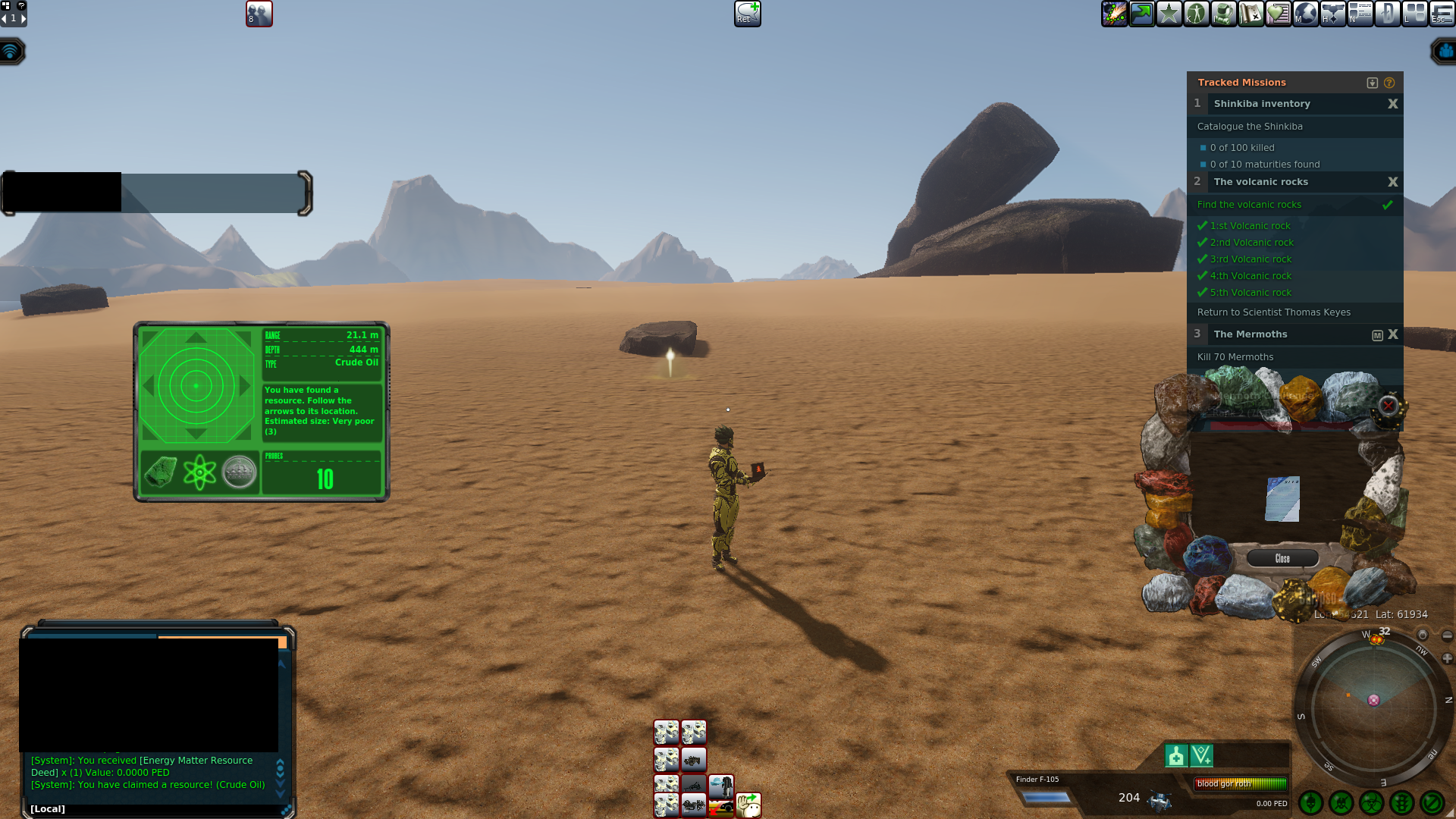 A couple of searches later I finally found some crude oil. While it was a tiny claim of just size 3 anything was enough. I refined it into fuel for my ship. I finished off the last remaining kills I needed for my codex and mission. I then got off that island as quickly as I could. I was not going to be without options. There are quite a few different ways to get out of a bad situation. They however can take a lot more work than just mining up some crude oil and flying out.

If I had not found that oil would have been getting killed. Then respawning and hoping that location had a storage unit for me to pull my Quad-Wing out of for fuel or checking my storage to see if I had any leftover. At the very worst it would have given me more area to mine and I might have been able to drive one of my cars assuming it did not run out of fuel to a proper camp with a teleporter and storage.

Another option could have been waiting around for another player and asking for a ride back to a town. I also have could have asked a friend to come to pick me up. Most of the time these days they are off on another planet.

This adventure was however a friendly reminder to me that I should check to see how much fuel I have once a week. Even more so if I’m flying all over the place looking for missions to run. Thankfully I was able to get myself out of this situation.

Getting stranded in an area can be a huge deal. There have been horror stories of players being stuck in areas (usually mid-way stations in space) for months on end. There even was a Calypso rescue team of players that I have no idea if they are still around that used to help rescue people who got standard on the planet.

Thankfully I did not have to tempt my fate in the ocean trying to avoid some higher-level creatures as a last resource. I also did not have to kill my way through a highly dense swamp to get somewhere I could get out. As a higher-level player, I at least have these options.