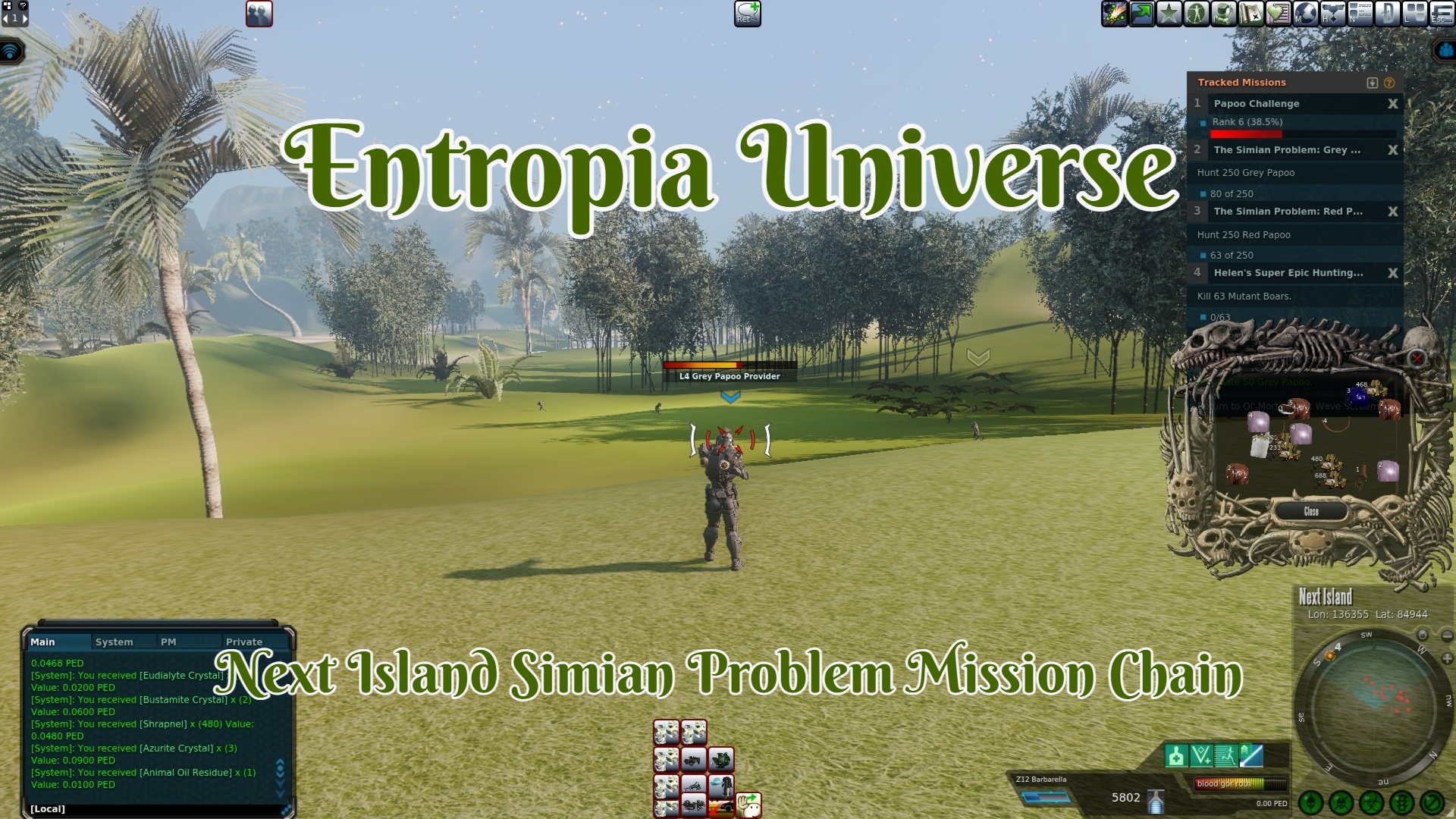 Earning an agility point in Entropia Universe is quite an important thing to do. While there are some missions out there to earn one they can sometimes be quite a difficult grind. Thankfully the mission chain on Next Island called Simian Problem was not that bad to complete.

The kind of person who might find themselves not wanting to collect the mission reward for this right away is going to be a newer player. Someone who has very low or no Agility. Someone who plans to depo big and goes on a massive skilling spree that will earn them a little bit of agility along the way. If any of these is your situation perhaps in 6 months to a year reconsider if now is a good e to work on this mission.

Under the ideal condition, you would hold off on doing such a rather easy mission change till you are an Uber player. Till you have so much Agility it is hard to earn much of it anymore let alone an entire full point of it. However, most players are never going to reach that stage of this game. As that is quite a costly thing to achieve.

Then you have players like myself. I have been around for a while. I’ll play this game off and on again from time to time. A full agility point right now sounds amazing. I’m not going to stress over the fact that I decided to get this now instead of holding off for years to get this. For all I know, this mission could one day get removed.

Then you have the people that don’t take this game to the insane level of having to think about whether is now the right time to get a full agility point or not. I feel many players are under that umbrella and you can earn another skill as well for doing this mission chain. 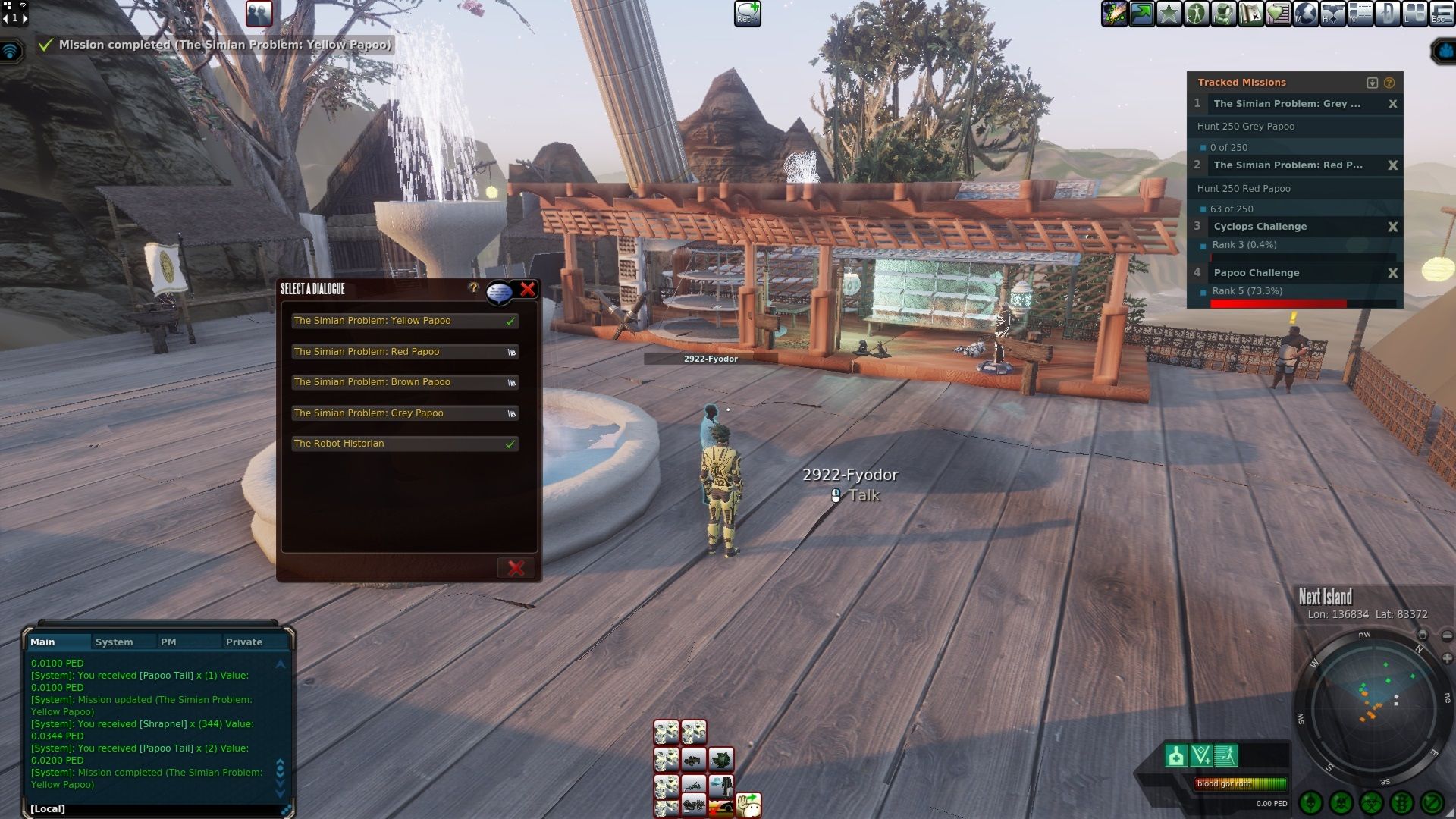 To get started you need to talk with the NPC 2922-Fyodor on Next Island located at (136834, 83372). There you will want to pick up all four missions, The Simon Problem: Yellow Papoo, Red Papoo, Brown Papoo, and Grey Papoo.

Each of these missions requires 250 kills to complete them. Once you complete all four you get to go on to collect an agility point along with a small amount of another skill.

While 250 kills is not a lot and these can be rather easy to take down. A smart player is going to try and stack other missions with these. I have covered some of these missions in prevue posts such as the daily mission for killing Red Papoo. 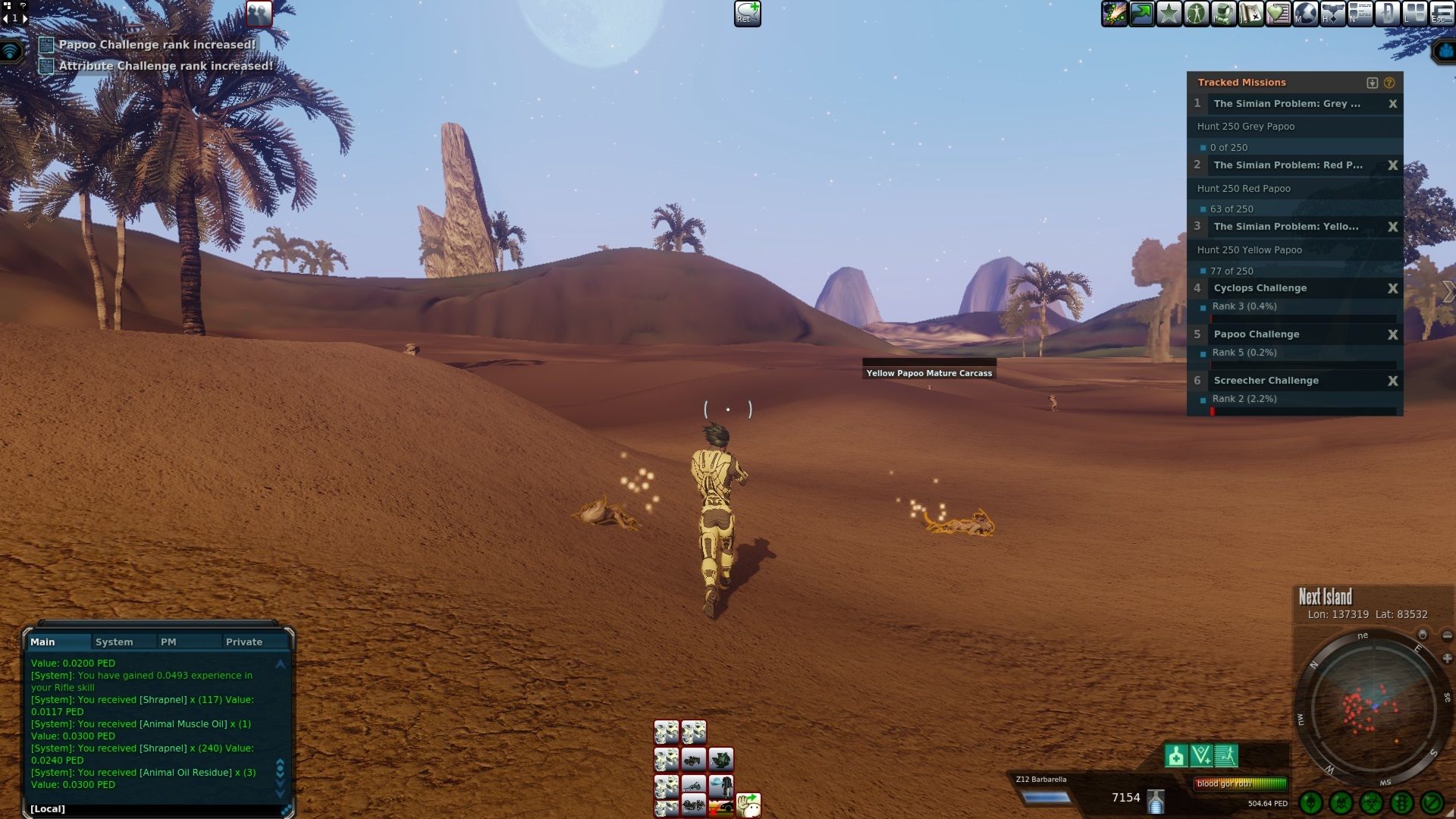 A vast area of Yellow Papoo can be found around (137319, 83532). Alone they are not much trouble due to triggering such things as wave events in their area of them. With how dense most packs of Papoo tend to be found. Their numbers over time can start to overwhelm them.

Yellow Papoo are also the easiest ones to kill with only having 10 health at the lower end. While Red Papoo can be the second easiest. A smart player will want to stack doing the daily mission for killing Red Papoo which has 40 health. An even smarter player then would work on doing these 250 kills 50 a day so you can rack up some free ammo.

I on the other hand did not have that kind of time. Thankfully I got a small 13 PED global which more than made up for it while further hunting Red Stalkers after I had finished. You can find a few around (127442, 82503). I also talk about the daily mission in a prevues post. 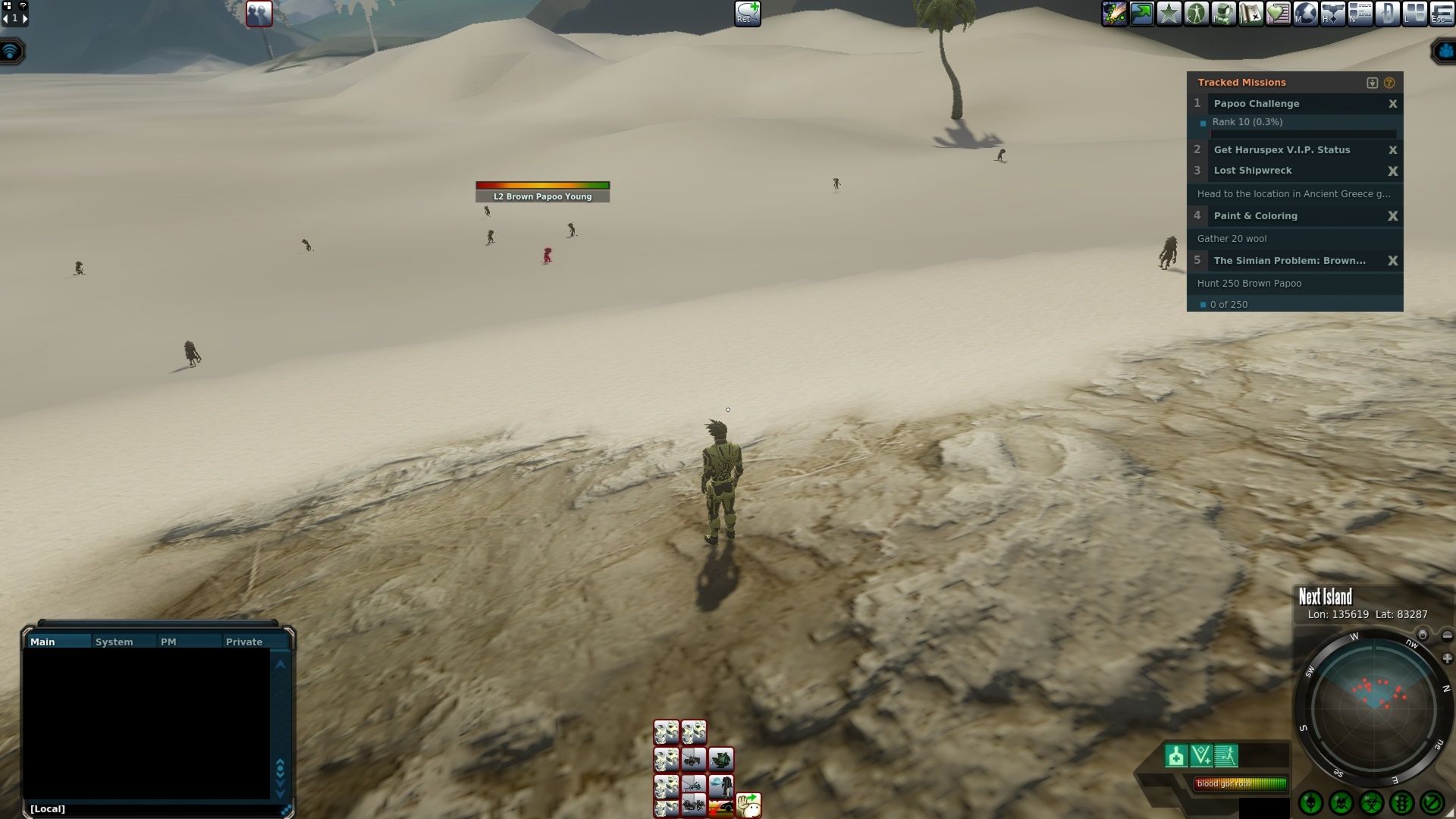 The third hardest to kill will be the Brown Papoo with 30 health at the lower end. You can find quite a lot of them around (136,339). 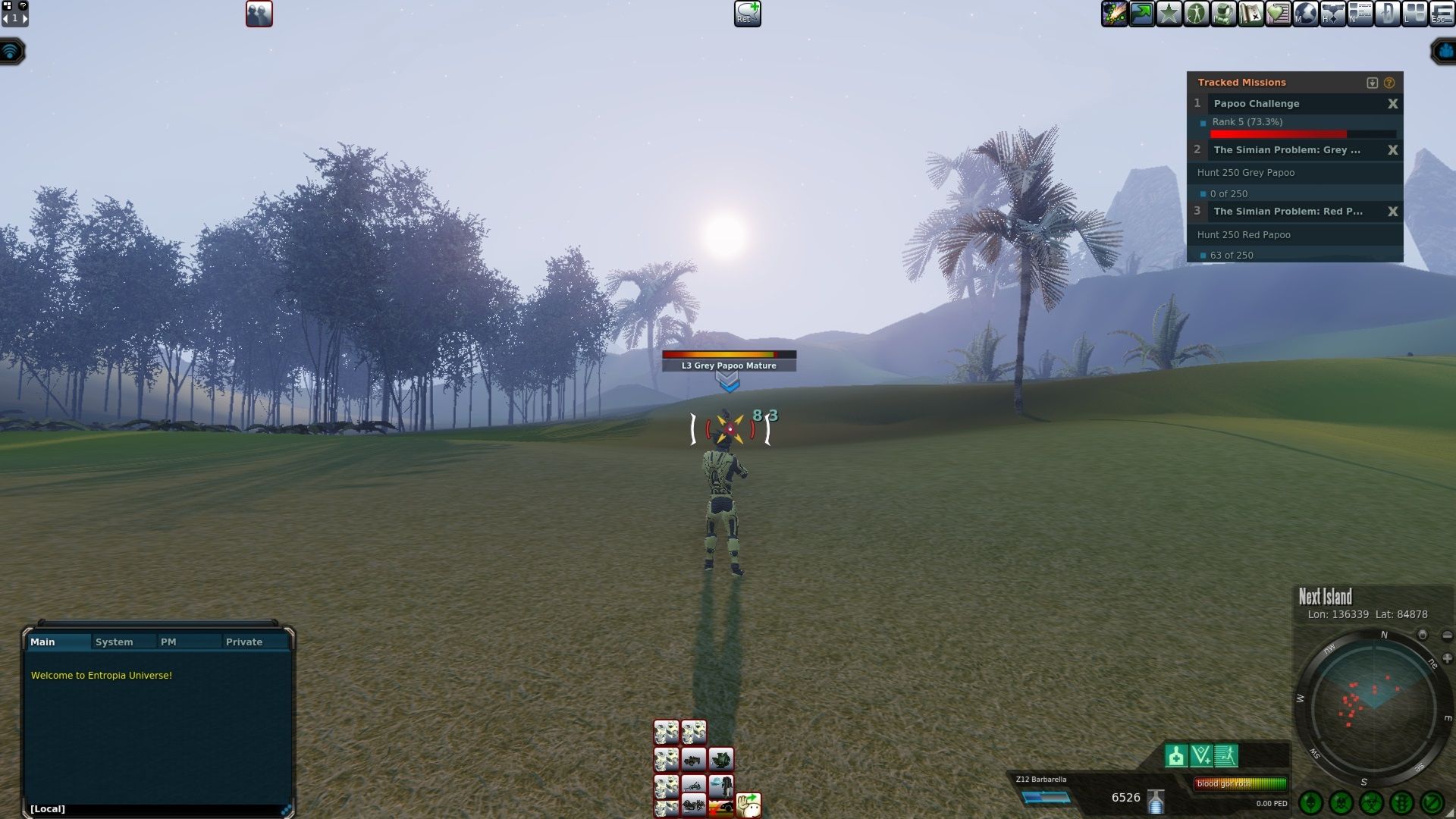 Finally, you have the hardest to kill the Grey Papoo starting at 50 health. You can find a bunch of them around (136339, 84878). Frankly, if you are a player seeking the 1 agility point all four of these should have been a cakewalk to kill. You might have even decided to fully take out the spawn wave events in some of these areas. You won’t get anything for just doing each of the first three 250 kills missions. However, on completing the fourth and final one and talking with 2922-Fyodor for that turn in you will get a further text to select your reward. You get 1 agility point and either melee combat or Long blades or Alertness skill.

This is a rather easy mission chain to finish. It can take a little while with having to kill that many creatures. Even more so if you are playing it smart and getting the daily Red Papoo mission and working these along with other missions.