It seems every time I hunt Rextelum the run never goes quite that well. I have a few reasons to want to hunt them from the mission chain they have that rewards some amazing skills to the codex. Even some of the drops look interesting. Usually, I stay away as uber players farm the special spawn of it and get massive globals.

I had noticed the uber players either had some bad runs or were a bit busy with some other things. They also made some massive changes it seems to the spawn. While they did not officially say anything about the spawn changes I more than noticed it when I revisited the island they are on.

As far as The Sand King himself that has 950k health that the ubers farm for special items that only drop off it. They removed the ability to spawn vehicles while inside its special arena. I decided to take advantage before they went back to full-time farming it by hunting the smaller Rextelum. I went out to one of the usual areas I tend to hunt Rextelum in. I noticed instead of having a mixed spawn of a few different maturities it was only weak. On top of that, I could get some decent range if I pulled right with how the spawn was set up.

One thing I noticed is just how much my character skills have improved over the past couple of months from the last time I hunted Rextelum. Not only was I almost killing them if I had the right amount of space to move around before they could even hit me. Even under ideal conditions I rarely had to heal while in combat. I was also doing slightly more damage. This had enough of an impact on the 1580 health they had I noticed how much faster I was killing them. I almost can’t wait till I get an even bigger gun to see how much easier they will become.

These all had a positive impact from the best I could tell on my runs. My healing decay and armor decay had deceased. While it was not a huge amount sometimes that is all it takes to tip things into your favor or at the very least make it worth going back out and doing further runs on them.

Many times I was even killing them fast enough that I could allow my natural health regeneration which is increased by a ring I’m wearing to do all the work for me. I had gained a few more health over the past many months I was no longer concerned about getting one shot by them.

If it was not for the fact that I wanted to have decent gear on just in case I got any respawns on me. I would have to switch out from my gremlin and into one of my other sets of armor that increase my movement speed. 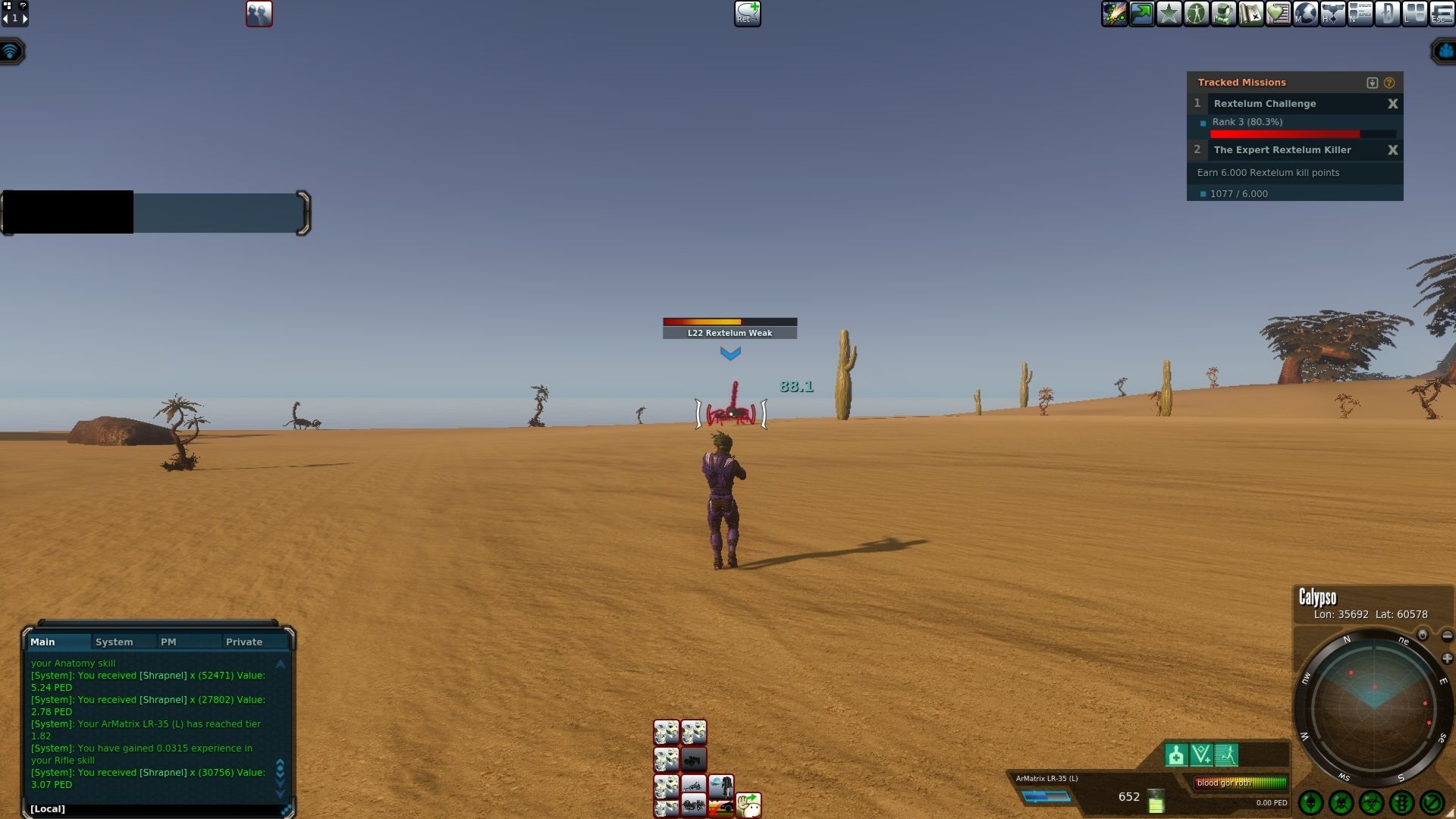 I even explored around the area a fair amount trying to see at what point I would see anything harder than Rextelum weak. It turns out they are now more towards the middle of the island. There is such a massive area of weak now that quite a few hunters could be out here farming them and no one would be bumping heads.

My first run on them felt like a standard run I was down 32%. I however noticed how little decay I had taken and the progress I had made on the codex and earn Rextelum point mission I decided to do a bit more hunting. 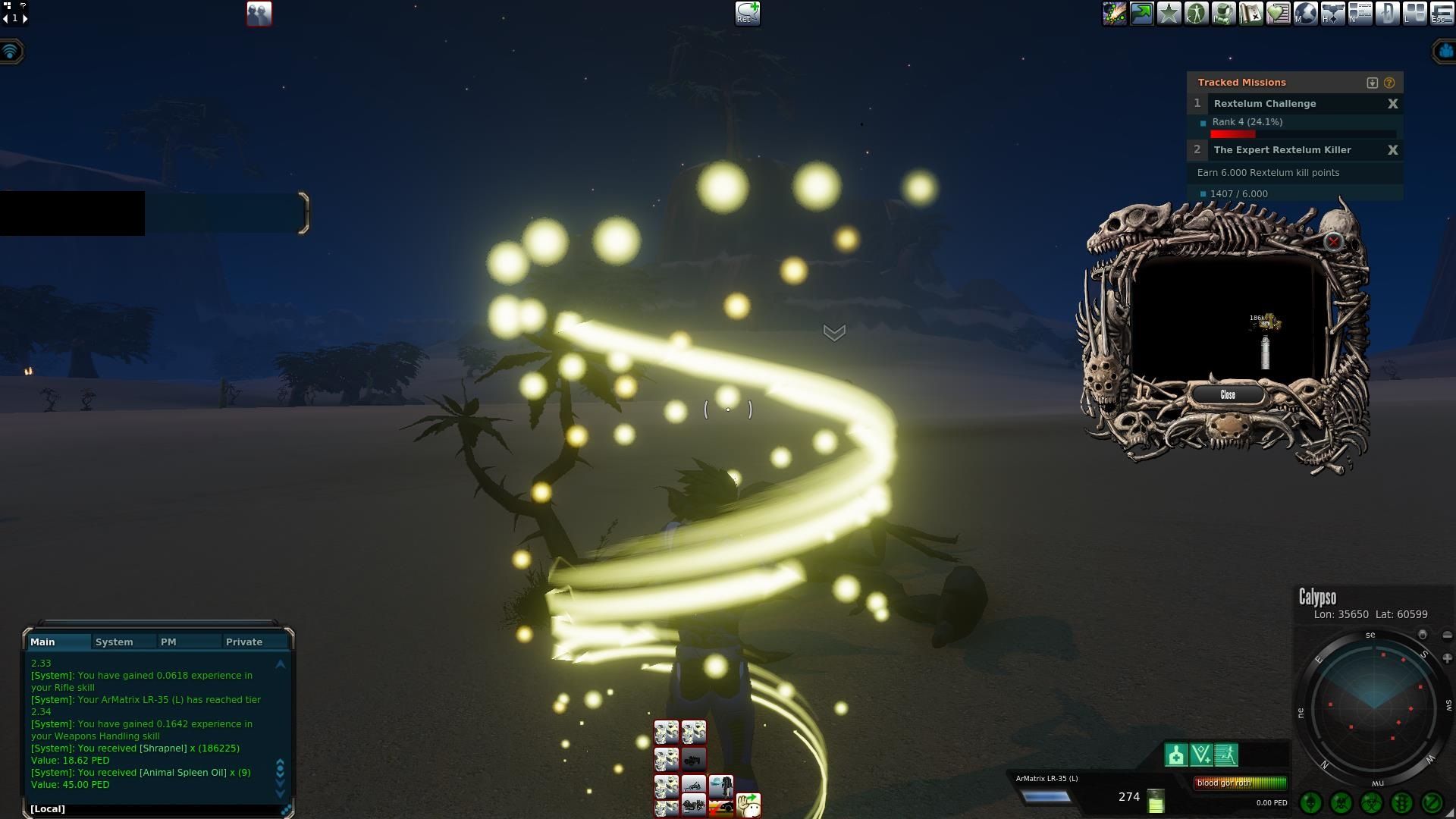 On my next run, I had a similar amount of decay on my armor and tools. I ended up getting a global on them. While nothing that great the loot was mostly animal spleen oil which lacks much markup. It was however nice to see something other than shrapnel being the majority of the loot.

That time however I was only down 2.8%. If the run had gone slightly better it would have been a break even. Revenge certainly on my hunch seemed to be doing a lot better than the last time I hunted them.

While sometimes I would go on back-to-back hunts on them. Other times I would come to hunt them late at night when there were not many players around. It was almost like I had my private beach hunting grounds over them.

Even if I had run into other players I had discovered a couple of different spots where I could make the room I needed to hunt these quite efficiently without getting much armor and healing decay.

This particular night I decided to do one more hunt on them before going to bed. I was getting quite tired but I thought why not? 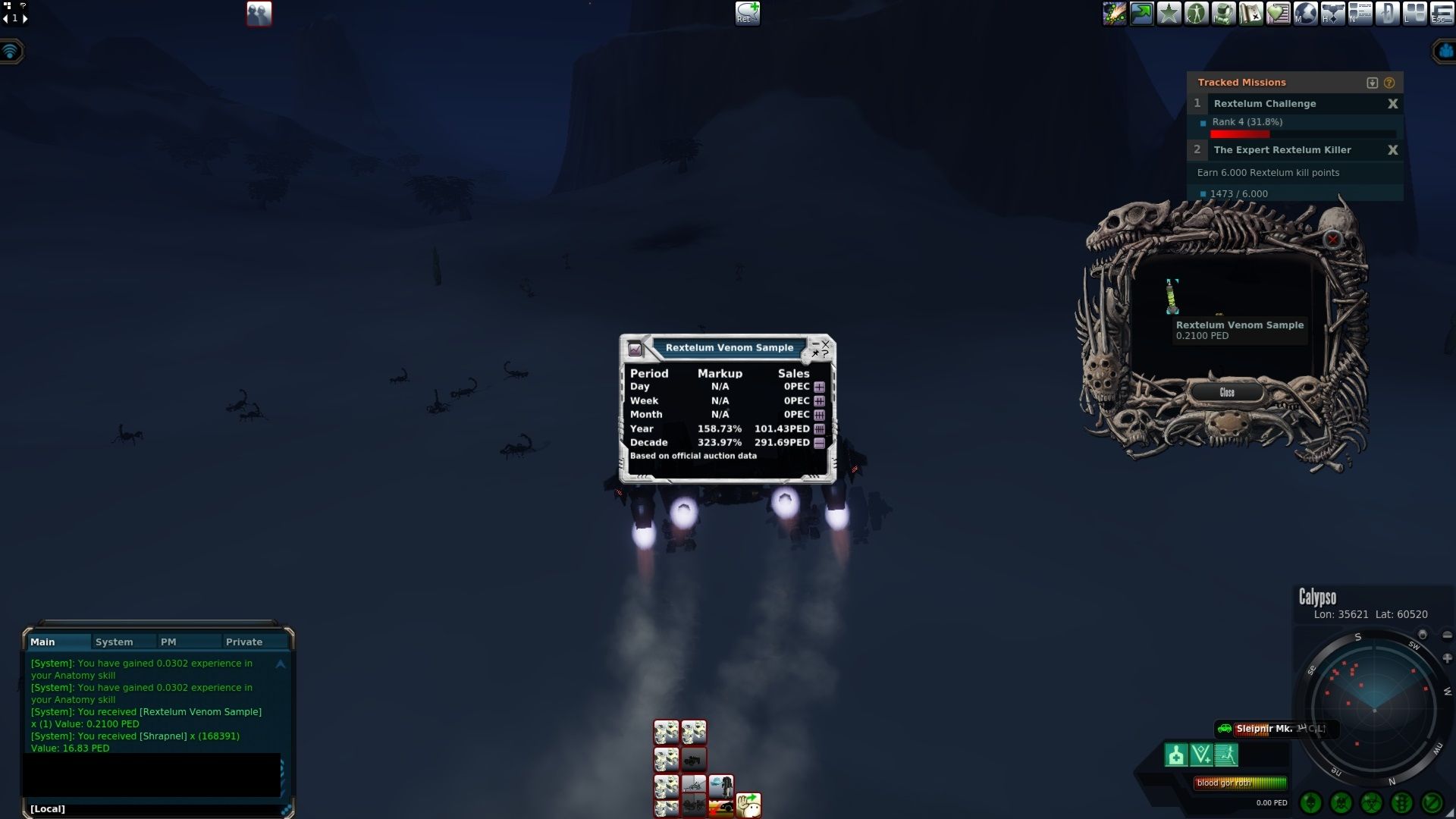 One of the more interesting things about Entropia Universe is there are still items in it that either have no current use or perhaps the player base is not an area of it in a wide enough fashion that it is common knowledge. I ended up looting some Rextelum Venom Samples which have only yearly sales and no information I could find on the wiki for what it was for. 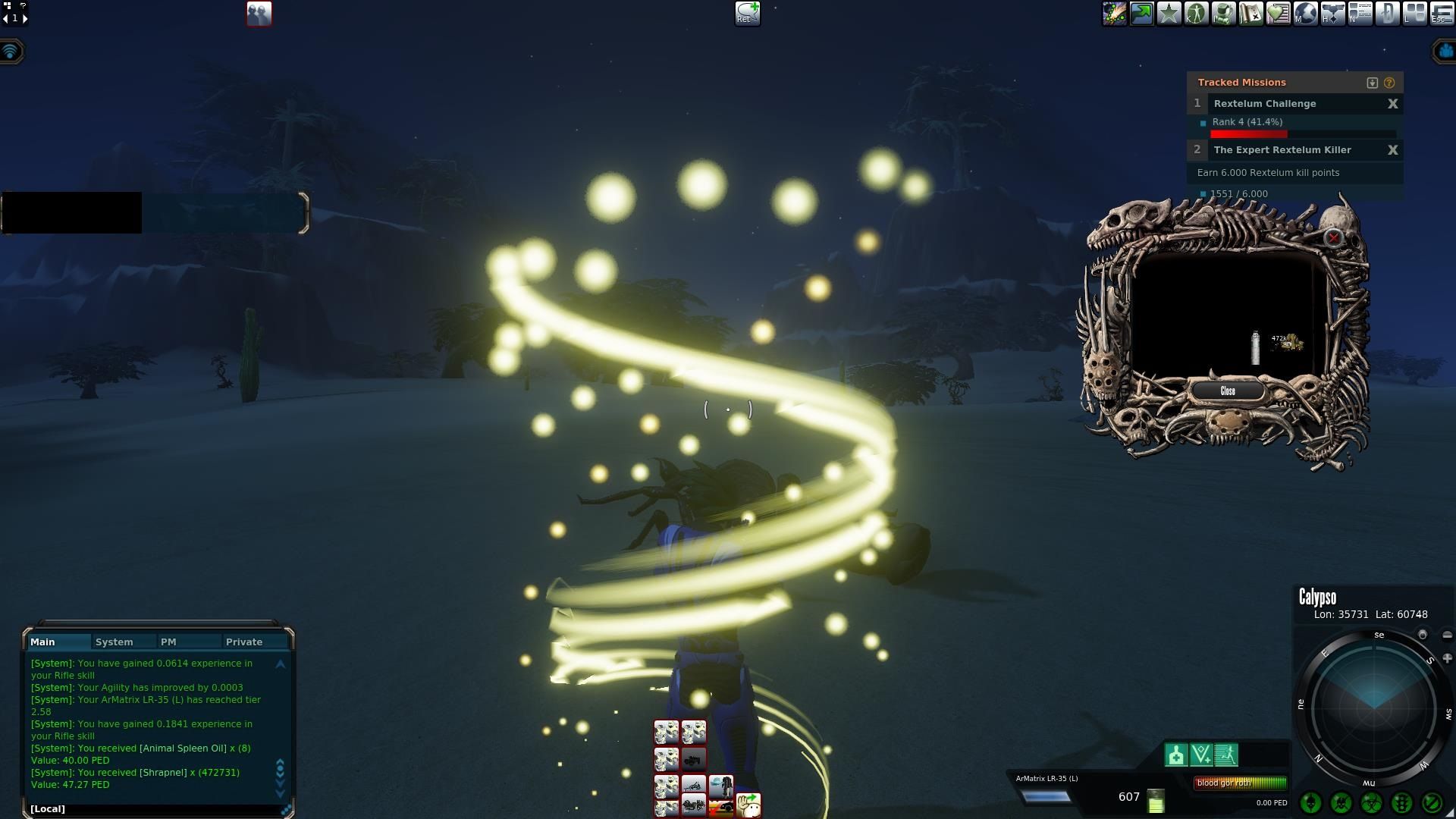 Shortly after that, I ended up getting an 87 PED global. While again nothing that great in the loot. The fact that the numbers were getting bigger I’ll take that as a win. I’m used to these things treating me like trash and for once it was nice early into a run to know I was going to at least break even if not better. 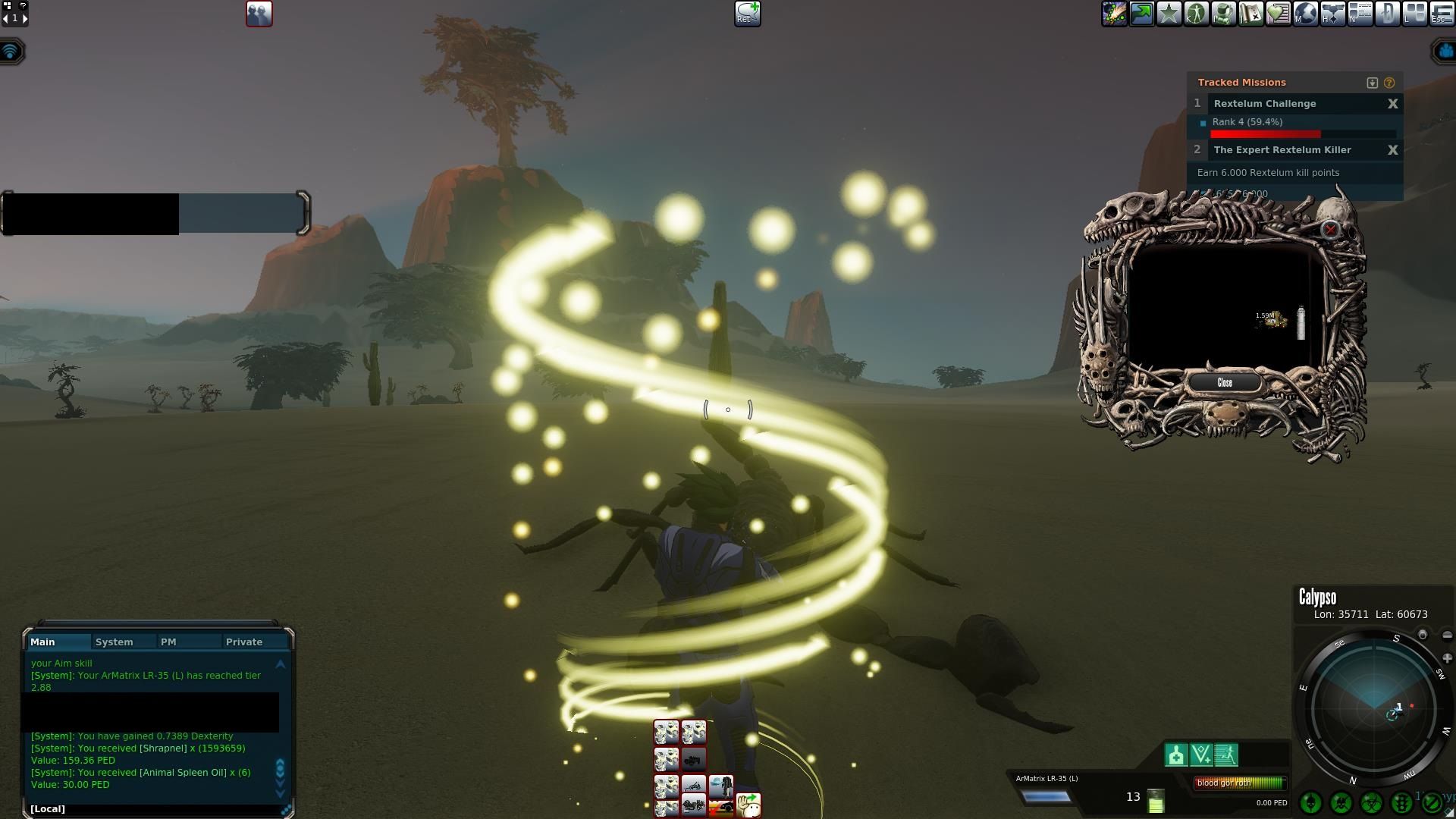 Right towards the end of this run, I ended up getting quite a few perception gains. I decided to clear out the area I was in to see if I could find it after dropping some probes and finding nothing on the mining front. I was down to just a couple of shots left hoping it was the creature I was shooting causing the gains. I did not have enough ammo to kill another and sure enough, I got a 189 PED global. 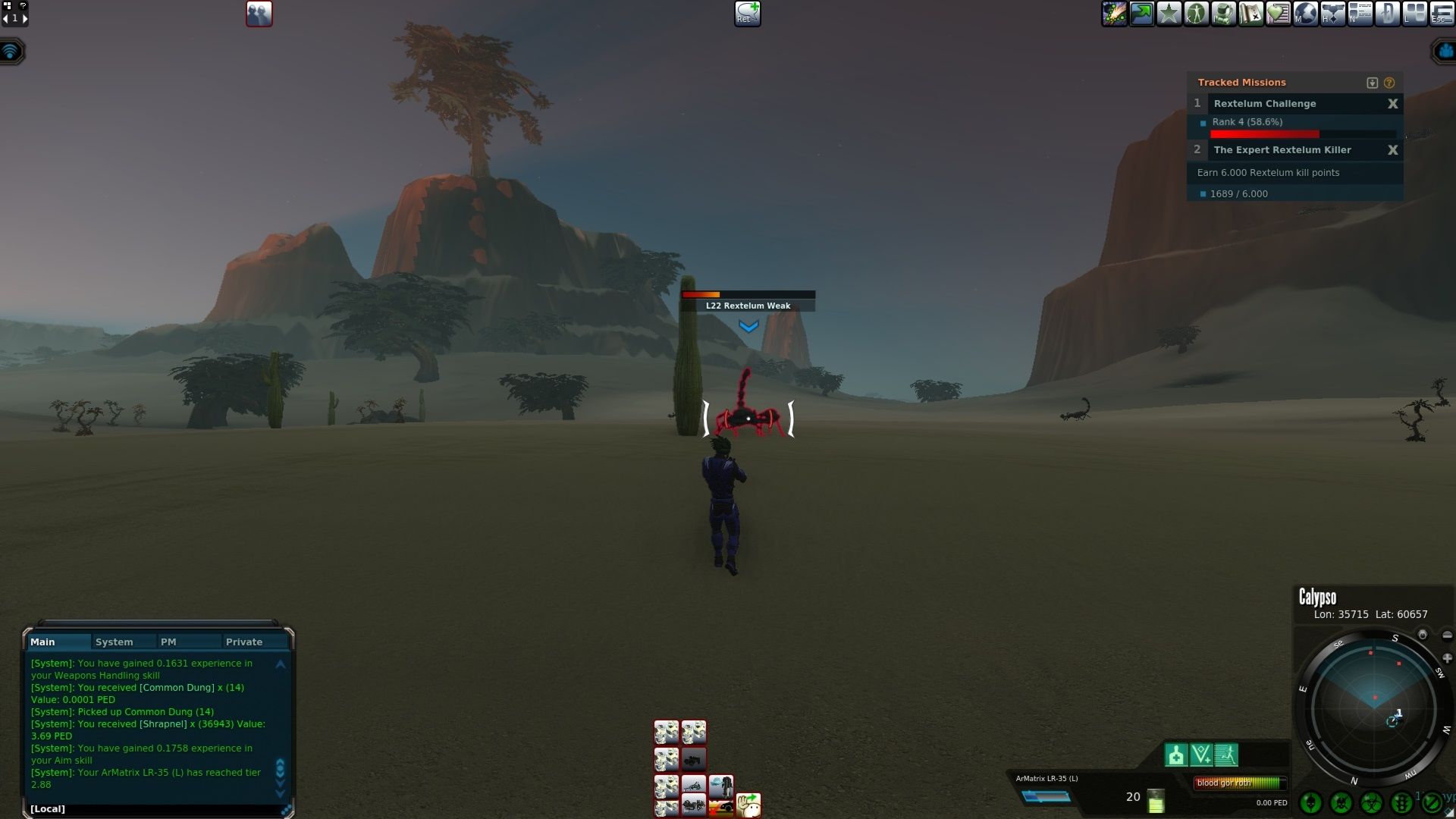 That final run of the day I ended being up 82% for that run. It was more than enough to cover some of my losses on my other most recent runs on Rextelum as well. While it did not fully wipe out my total losses on these things from my hunts a few months back. It was a decent start.

I was also up enough and wanting to work on the mission and the codex further for Rextelum that I would go on a few more hunts on them. I at least wanted to get some of the uncommon (L) items drops off and see what else they had to offer if anything for me.

Revenge on Rextelum was starting to look like it would be mine for the taking.