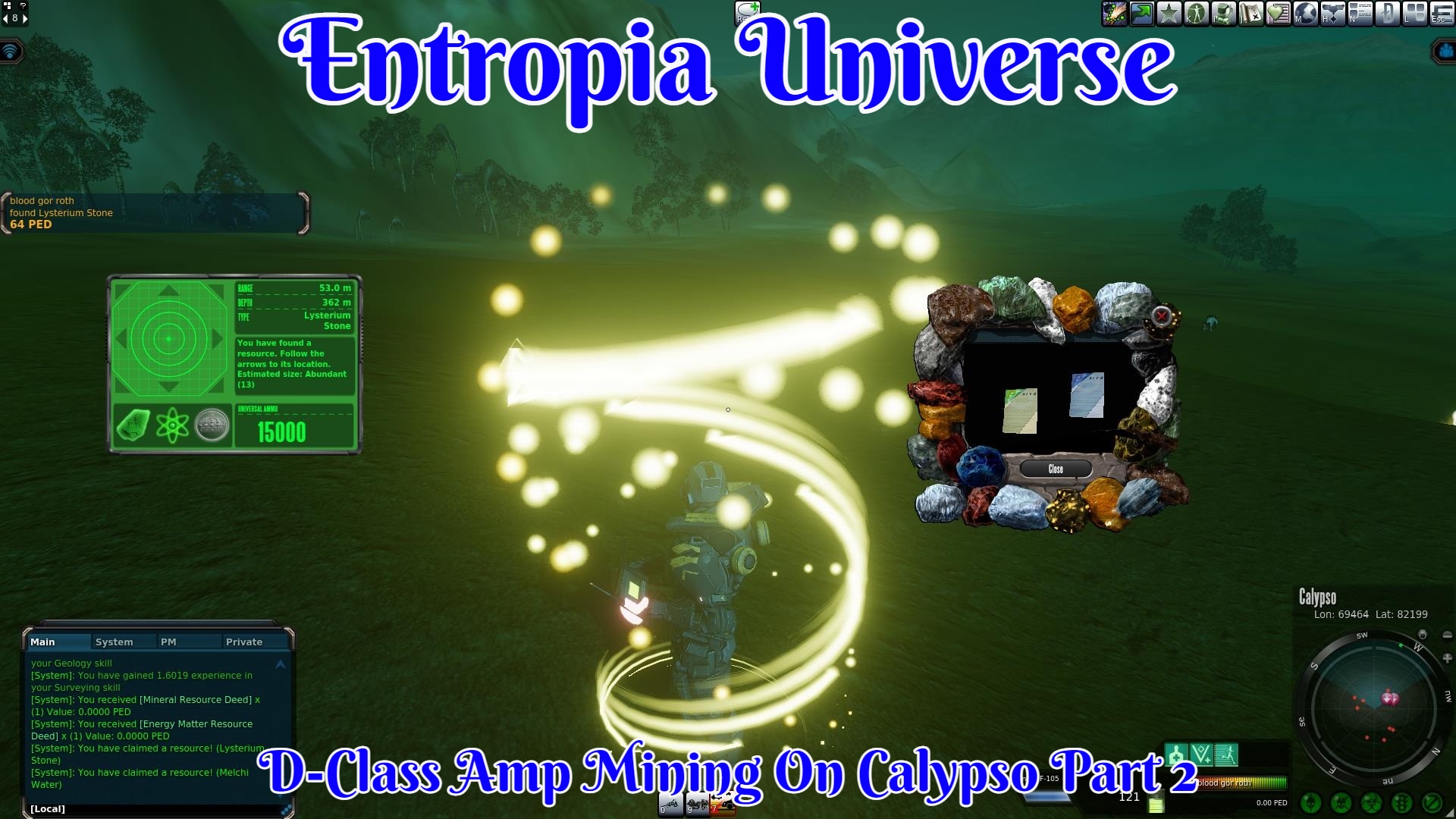 With the first D-Class amp mining run on Calypso not being that great I went out and did another run. Same as before 3 D-class amps. I would also be double dropping again for both ores and enmatters.

With the way that last amp mining trip ended and some information, I had on the map that I wanted to act on. I went out and got 3 more mining D-class amps and went to finish off a part of where I left off. I then contained to explore the area a bit deeper. As you can see on my Little Big Mining Log map where my last run ended and where I decided to pick it up again. I was getting quite a few hits in that area I could just not leave it be. This time since I was amp mining I was a bit less greedy and trying to find every single spot up there.

You can see I did not fully explore all around once I got some dead no claim spots like I was doing before. Usably in non-amp mining situations I tend to get a bit greedy. With how much each drop was costing I just did not have it in me to go full carpet bombing the area style. All these runs are done on an F-105 finder. If I was going to take up amp mining long-term I would want to upgrade to an (L) finder or shell out a lot of money for F-106 and perhaps even add depth enhancers onto the tool.

One of the benefits at least in my eyes of using an F-105 is if people are using F-106 or something like F-101 in the area we are mining at different possible depths. Granted there will be a lot of overlap. A non-socket F-105 has done me quite well for some time. A lot of the old timers who would be amp mining would be with F-106. During this run, I ended up getting a few more double finds than I was the last time around. I ended up finding quite a few Blausariam Stone claims on this run. It’s a shame it has such a low markup on it.

Seven mining claims into this run is when I found my first global a size 13 Lysterium stone that I featured on the cover of this post for 64 PED. While a lot of people hate Lysterium it has been going up in markup a little bit over these past few weeks. Despite how often I end up hitting it I usually don't mind it as you tend to find bigger claims of it. 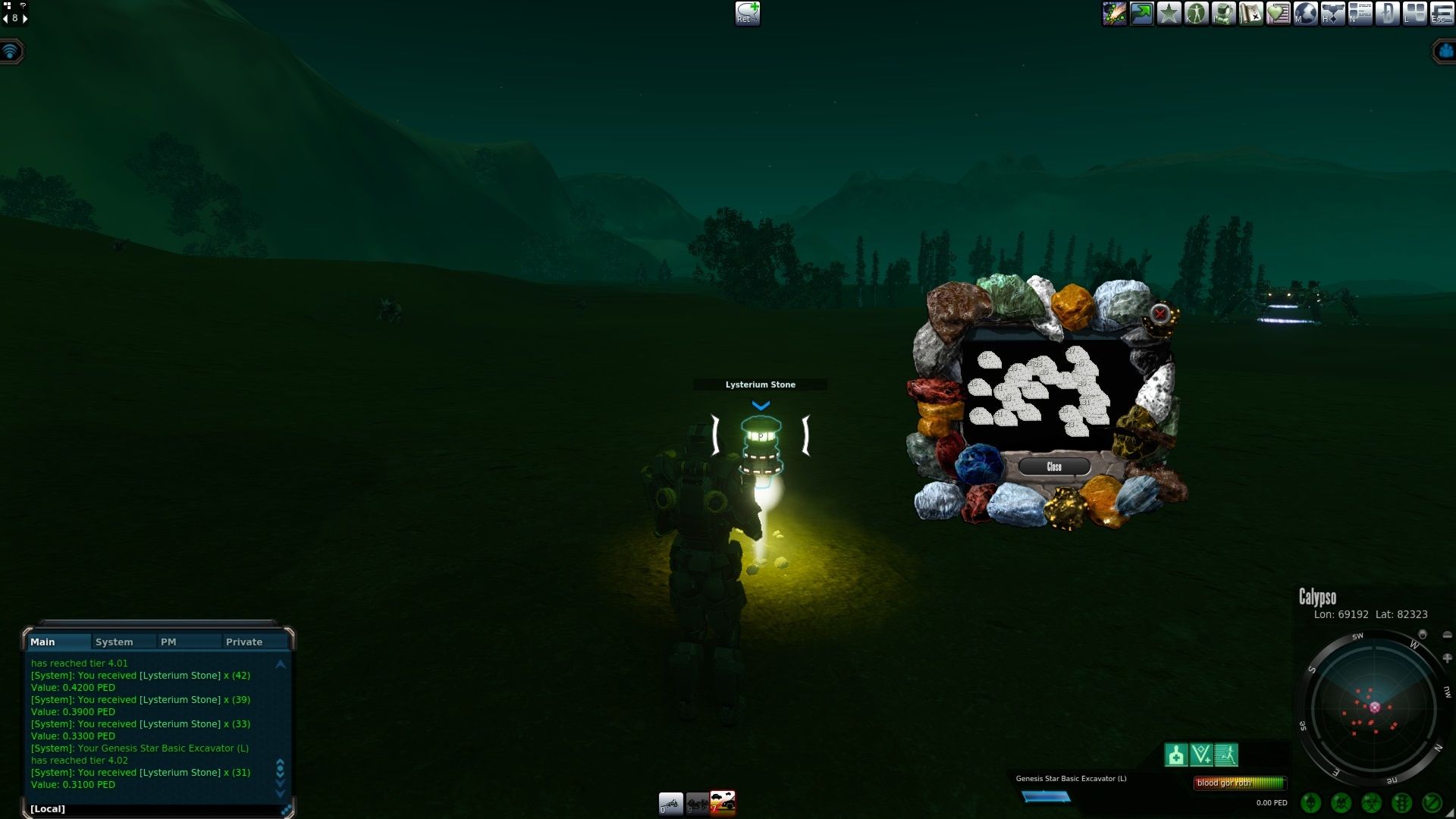 I ended up switching out to a full basic extractor and going afk for a while with the tool on auto. This mining claim was going to take a while with only mining up .31 to .42 PED per cycle. It took around 10 minutes of extracting to get it all.

I then went back and picked up other claims since I did not want to risk any of them. Some of them were in the middle of packs of creatures like my global. Thankfully the creatures here for the most part left me alone. They also did not hit very hard and I could have switched out to some better armor if needed. 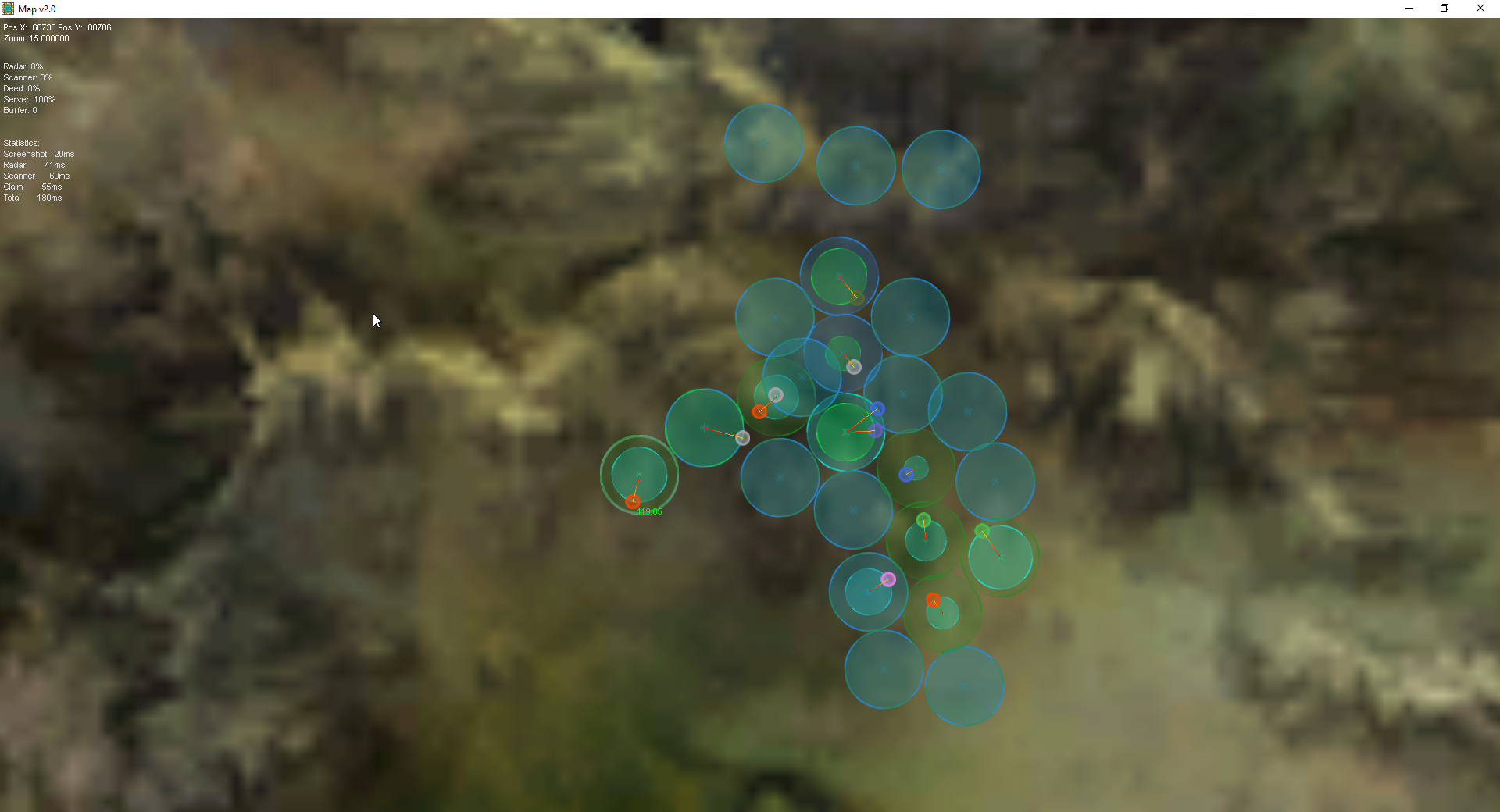 The remaining part of that area was not enough to finish off my remaining D-class amps. So I flew a little over to another area that was around some mountains and gave that spot a try. The screenshot above is my Little Big Mining Log map. I just can’t seem to stay away from that Blausariam stone. I ended up finding a size 10 which in my first mining amp run I never even got anything that size or bigger. This size 10 claim would end up being my 3rd largest find for this 3 D-class amp run.

The mountain I was mining on had quite the slope. I ended up having my ship roll down the entire thing and take a bunch of damage. I decided since there were no creatures I needed to worry about on this mountain to drive around in one of my cars instead. The car 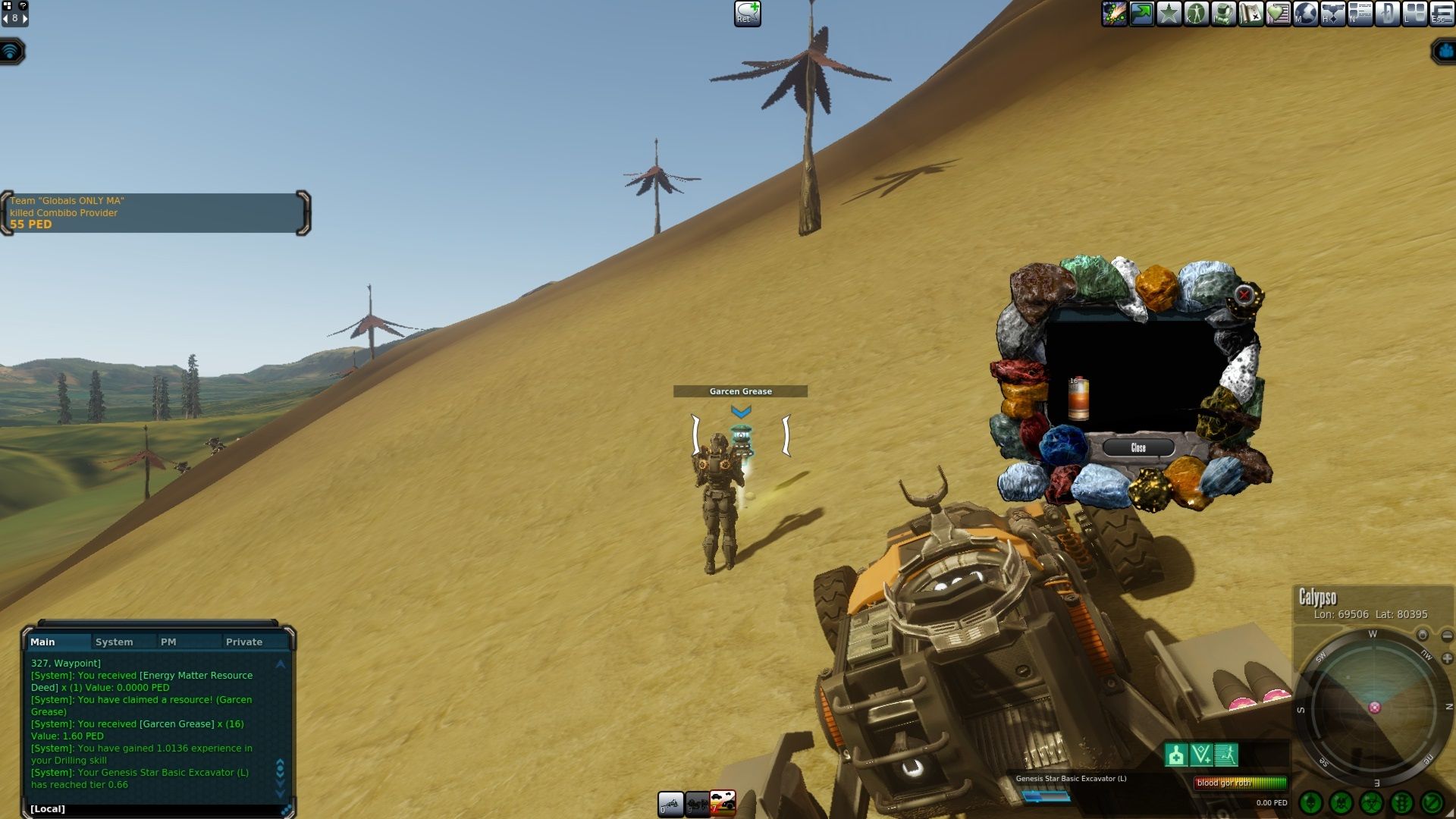 It had some amazing traction and was not going anywhere. While some parts of the mountain did it did struggle to get up. I usually found a path around where I wanted to drop my next set of probes. While there was a little more overlapping than I tend to like when dealing with a mountain and where you can drop a probe I’ll take what I can get.

In this run, I did not find as many high markup mining resources. A lot of the finds were sadly 105% markup or blow. I at least did find a little bit of Garcen Grease that was going for about 127% markup at the time of writing this post. It is tempting to want to go back and see if I can find more of it. 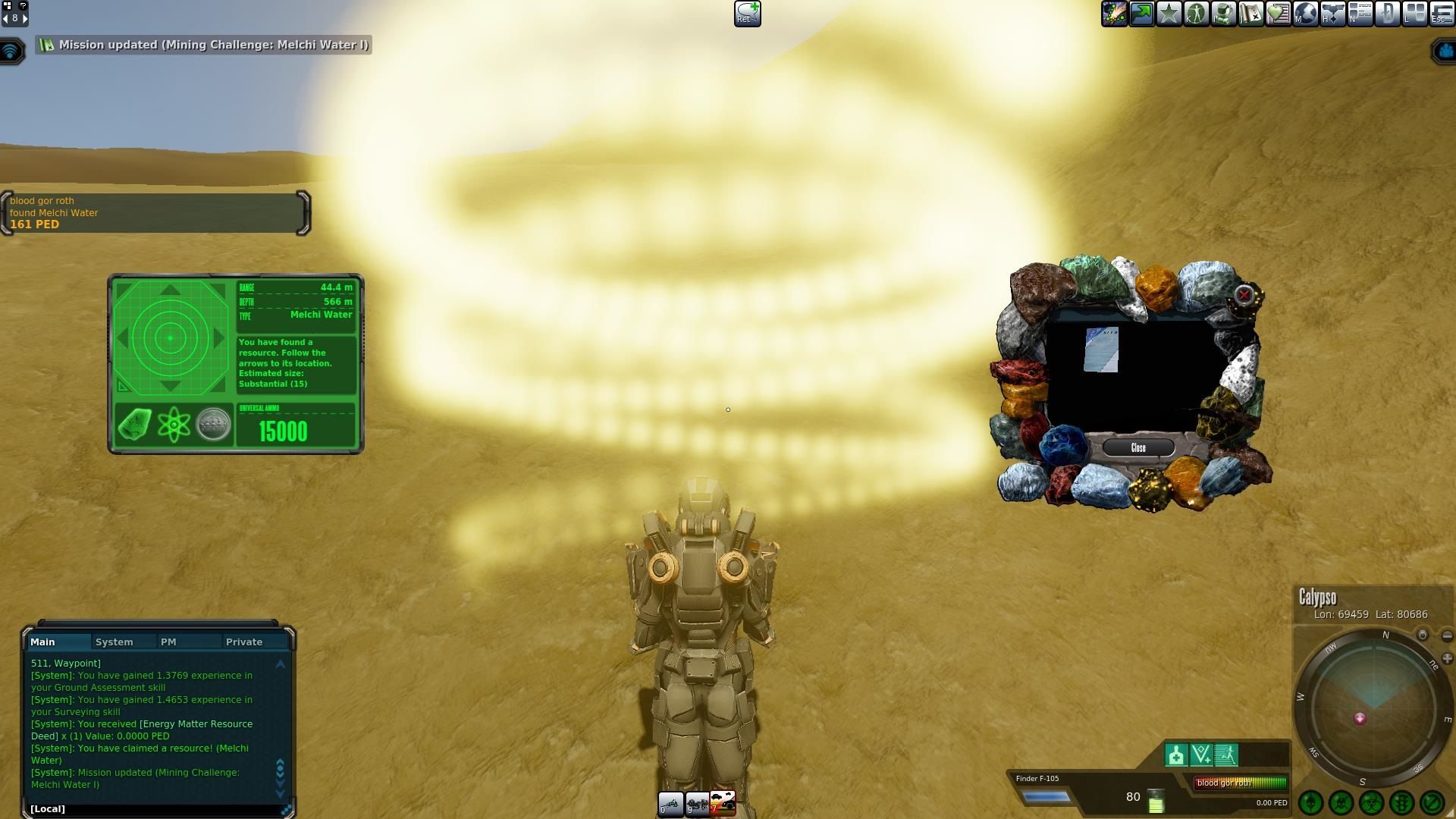 Shortly after I ended up hitting a mining daily Hall Of Fame. As it tends to be in mining, not a very large claim. A 161 PED find even if it was Melchi Water would go a long way to helping turn this second part of the run into profit. You can bet that took quite a while to extract. Thankfully this part of the run I was extracting as I was going and just putting my resources into vehicles and sending them to my storage. I’m just glad I brought some extra mining extractors.

As you tend to do with amp mining I went afk for a while. This took around 17 minutes if I’m not mistaken to fully extract. It also decayed my tool by around 33%. If this claim was much bigger I might be there for hours. 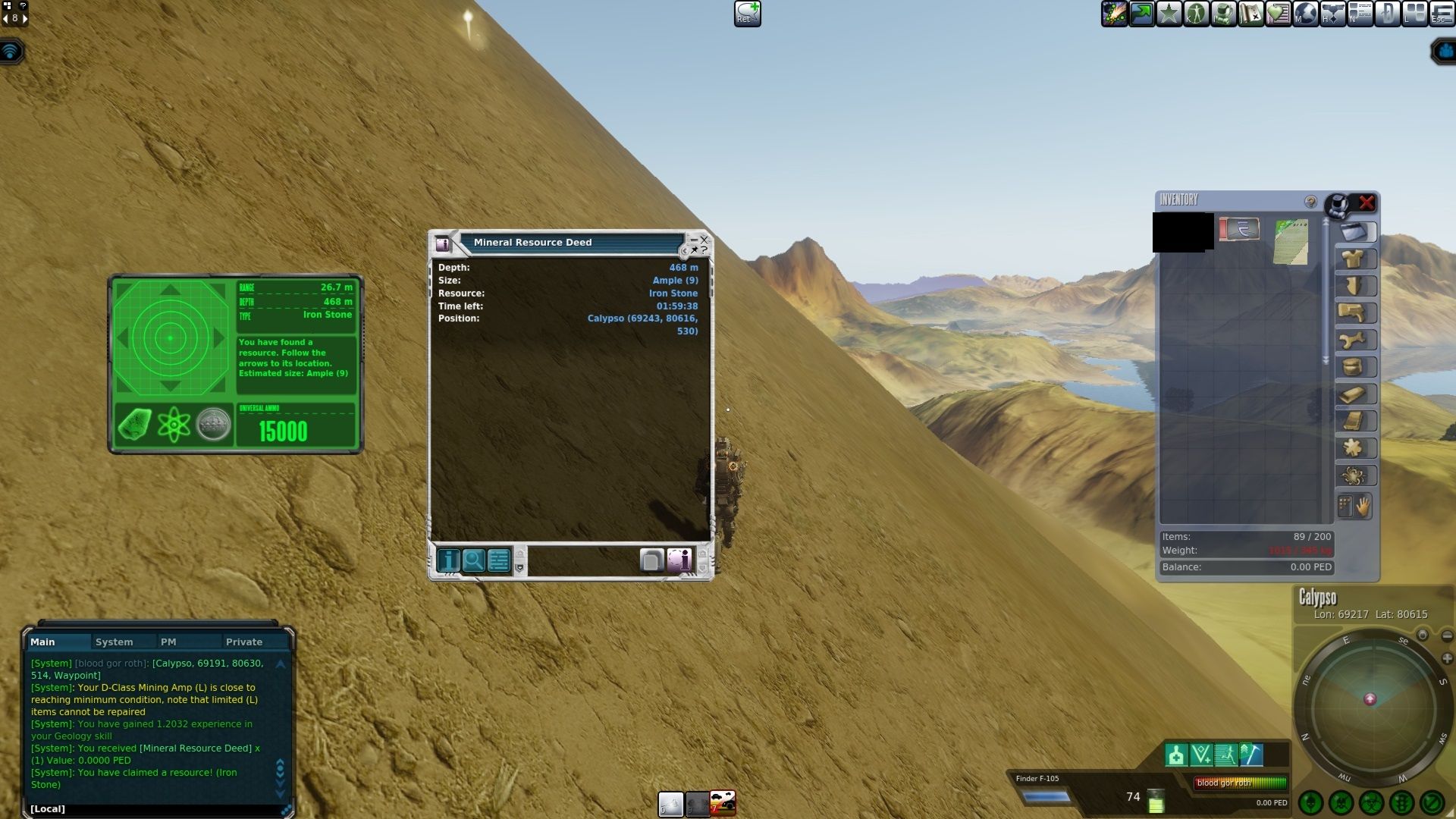 Finding that Hall Of Fame was also towards the end of my mining run. I only found a couple more mining claims after this and that was it. It was however an amazing run with two globals.

After markup, this run only ended up being up by 16.5%. I am rather shocked it did not go better with the two globals I got. I did however find a few fewer claims this run as well. There was also not as much markup as the first D-class amp mining run.

With my mining losses between the two runs being quite small. I decided why not go on another mining run. This time however I was going to go big. Yep, that is right I’m going mining on F.O.M.A next with a couple more D-class mining amps. My history with that place and amps is not a good one.