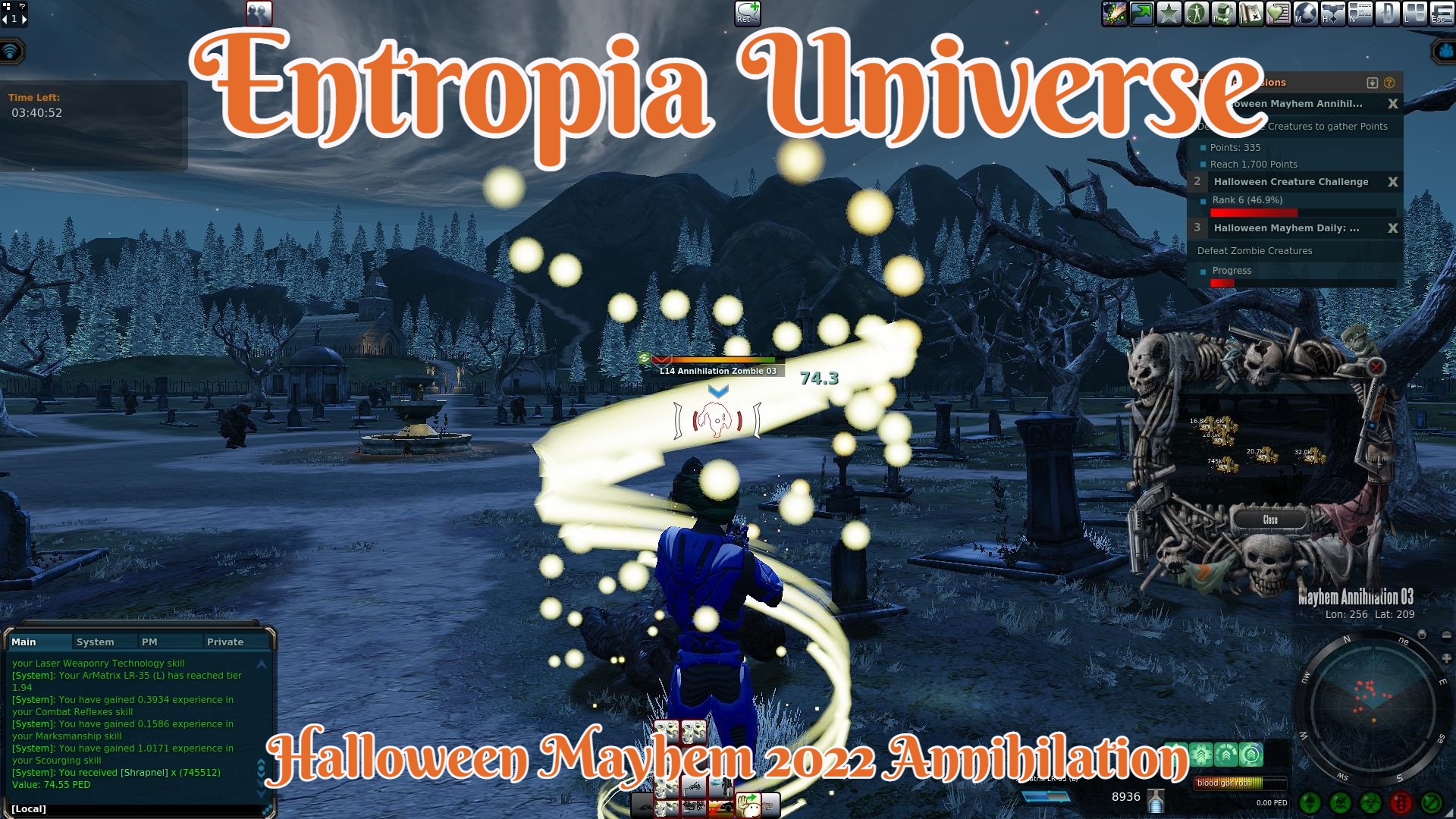 Mayhem Annihilation in Entropia Universe is an instance with ten different levels of difficulty. Where the player gets to face off against Annihilation Zombies and the occasional boss Kal-Rahm The Cannibal. Players rack up points by getting killings.

Halloween Mayhem Annihilation will be the instance I spend the most time in during the 2022 Halloween event in Entropia Universe. As it requires a lot of girding. In the last post I’ve discussed some of the preparation, reasoning why players tend to go big during these events, along with it being a bit of a rough start.

The cool thing about the Mayhem instances is you can get to them no matter what planet you are on in Entropia Universe. This means everyone is not forced to come flying home to planet Calypso. Granted many will more than likely make a trip there for supplies. 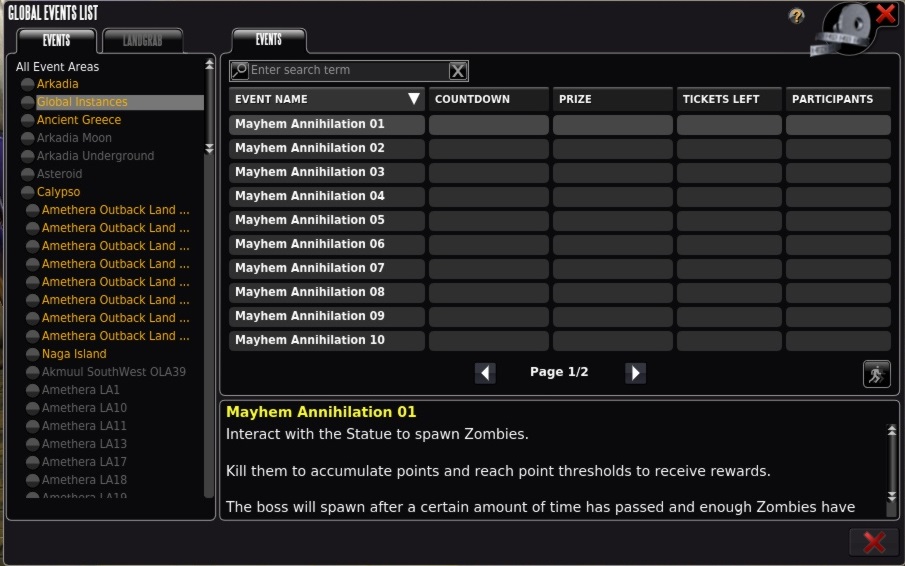 To be able to get into the instance you just need to pull up the events list. From there you will find it under global instances. Depending on the kind of armor, healing, and damage output you have you will end up selecting a different instance difficulty.

Mayhem Annihilation 01 is the easier of the ten listed. They have as normal spawns Annihilation zombies with 640 health and 36 damage.

The biggest challenge for most players will be the kind of damage the zombie's cause. With 16% of the damage being lighting many including myself don’t have much protection against it. You also have far more common damage types like impact, and penetration being 33% each and cut with the remaining 16% of the damage they cause.

On the higher end of things, you have Mayhem Annihilation 10. With zombies having 2260 health and dealing a whopping 231 damage. Even if you might be able to kill something like that you still have the boss spawn which has considerably more health than the normal zombies found within.

I will personally be doing Mayhem annihilation 03 instance with Gremlin armor, 5B plating, and using an Armatrix LR-35 (L) gun a try at first. I would later discover this was not the most ideal setup for that instance level. It took a bit longer than I should be to how many zombies I was killing every half an hour. I’ll be going over that more later on. When you enter the instance for the first time regardless of the difficulty you will be greeted with a mission. There are four different difficulty levels of mission to take on bronze, silver, gold, and redulite. If you are newer to the game bronze will be more than a challenge for most.

As someone who has done Easter Mayhem in the past where I picked bronze. I decided this time around to go with silver. With the number of points I scored last time I would have been better off choosing silver. While I doubt I’ll be able to finish all stages of the mission this seems like the most reasonable choice for me.

This is also a mission you should not abandon and they even warn you about the mission itself. Once you make a choice you only get that choice and you can’t pick another one.

Each creature you kill while inside the instance can reward between 0 points up to 2500. The more difficult the instance you are in the higher the chance you could get a bigger point reward. However, an important thing to know about events like this is time spent killing tends to have a bigger impact than a chance at a higher point reward.

After my first run of this instance for 5 hours, I can say it is quite common for the bulk of the kills to reward zero points. I ended up writing down my points as I was getting them and in Mayhem Annihilation 03 I did get a couple 100 point kills. However, the bulk of the points I did get when I got points were either 5 or 10 points. There were a few 25 and 50 points gained as well.

You do get 5 hours per instance run. With no limit on how many instances you can join. Before you start the event you should get a good understanding of your surroundings. Close to where you spawn in they do prove a revival, trade terminal, and repair station. Sadly yet again they did not provide storage so make sure to carry in everything you need beforehand.

The exit to the instance can also be found right behind the building plot with the terminals at it. When you leave the instance should be a throughout the plan. I like to leave after I have killed the boss and I don’t have time or supplies to be around till I can get the next boss to spawn. When you are ready to start you just click on the statue in the middle that has a waypoint. Then the zombies will start spawning. While I like the spot in front of the statue for camping. I will sometimes go around the cemetery circle clearing everything out when I get bored of sitting in one spot for too long.

Then the real fun begins! Lots of zombies all over the place and they respawn at a decent rate as well. If you are careful you should not get multiple zombies on you at once. Unless you are not paying much attention to them.

If you are like me and will be using pills during this event now would be the time to pop them. Make sure to understand which ones will stack with each other and which ones don’t. While I have a couple for reload speed, critical chance, and other things. I personally always be running a skill gain pill since I have so many of them and I have plans for very long grind sessions. The toher stuff I don’t have a lot of and might save some for future events. Along with the mission you accepted at the start. You will also notice the game gave you a daily mission that rewards Mayhem tokens once you have killed enough to fill the bar. Once one Mayhem daily rank is completed it will give you another with a higher amount of tokens that require even more killing than the last. There is also the Halloween Creature challenge codex. Since this is my first Halloween Mayhem I’ll be racking up quite a few ranks of this codex while grinding in Annihilation 03. My main focus for skill rewards will be ones for the looting profession. Things like anatomy skills also have an effect on ranged laser damage which is something I’m also looking to level up during this event. This means these codexes are allowing me to work on two goals I have at once!

One of the reasons I want to grind this Halloween event is for the codex. You can only get credit for this one during Halloween. While there are still many other codexes that would be better for me to grind out. I have a reason for holding off on those for now. 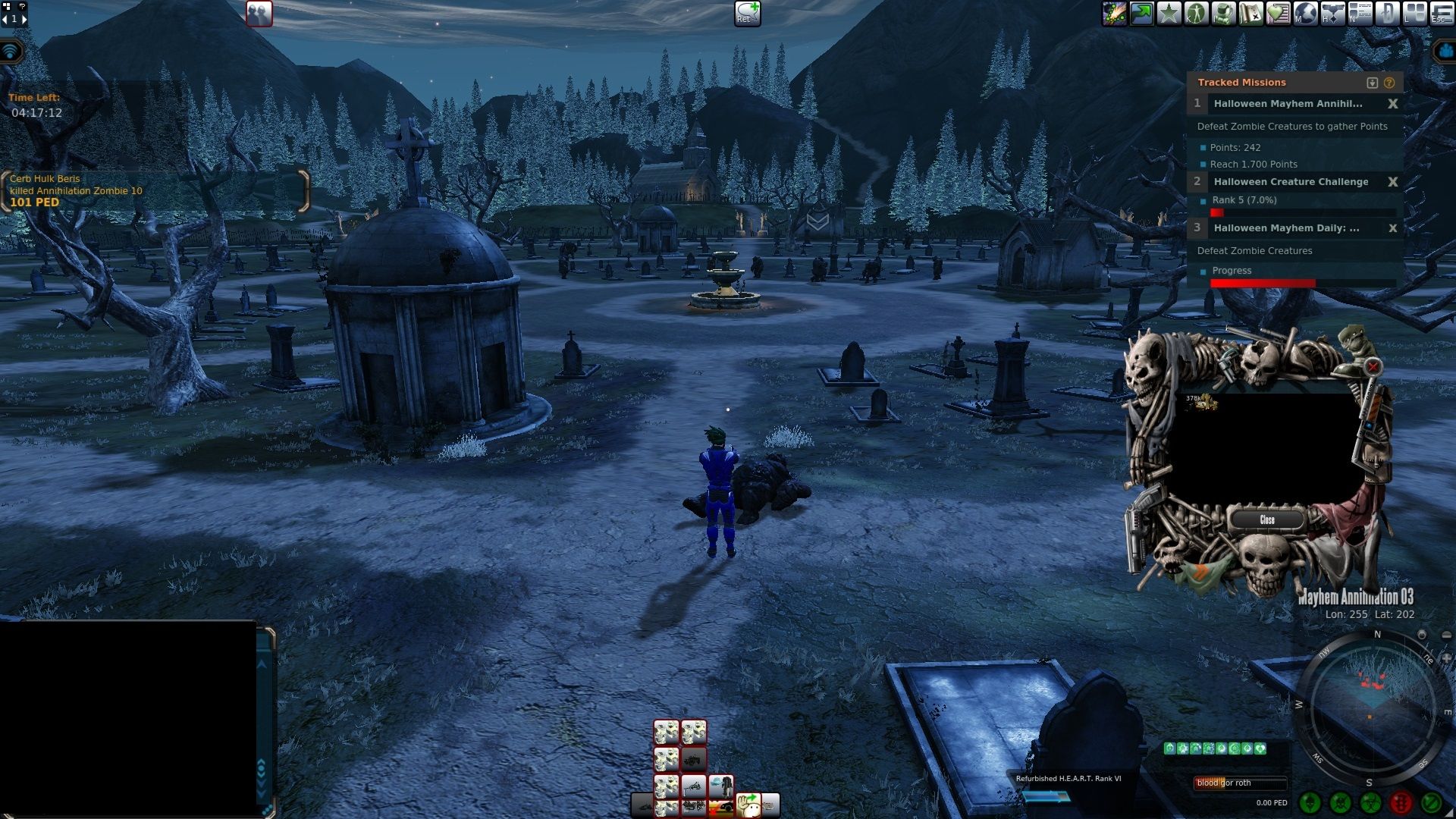 During my first 5 hour instance, I wish I could say I got a lot of globals. Thankfully it appears Annihilation zombies at this level give out quite a few 7, 15, and 30 ped drops. As I only ended up getting a single 74 PED global that I used for this day for the cover image of this post.

If I would have gotten a couple more globals I would be break even. As it stands now I am a bit down which is not unexpected. I am however doing much better this far into the event than I was doing during Easter. So at this point, I’m just thankful for that.

As far as the instance itself while it is not massive by any means. You do have a little bit of walking around the room. I could also if I wanted to sit back a bit further trying to max out the range of my rifle a bit better. However, the tombstones, a fountain, and buildings would sometimes create some line of sight issues.

One thing that occurs while in the instance is after 30 minutes and 96 kills a boss will spawn. You will then keep getting that boss under those same conditions. I was not killing at a rate of 96 kills per 30 minutes so I did fall a bit behind in meeting that goal. While I was still getting bosses to spawn I was just not getting as many as I could in the time frame I was in the instance. 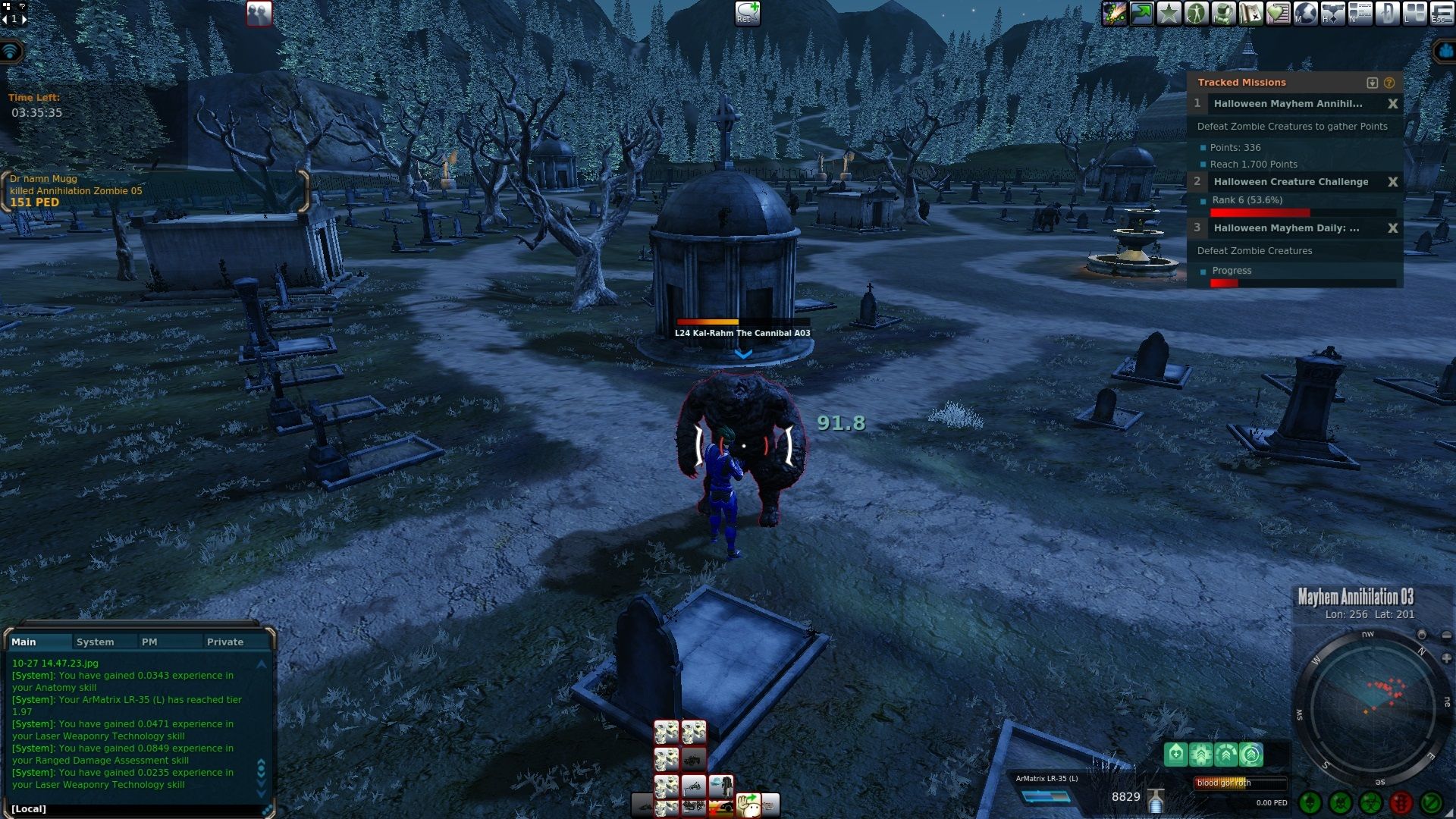 Kal-Rahm the Cannibal does take a bit longer to kill than a normal zombie in here. In a mayhem Annihilation 03 instance, I was dealing with ones that had almost 3.4k health. Thankfully the damage was not that bad but I did need to heal somewhat.

After each kill of the boss, it seemed I was always getting 1 mayhem token, 1 Halloween strongbox, and some shrapnel. While I had better hops of looting more off this guy he was always a lower looter when I killed him for the amount of ammo it took to kill.

On a couple of occasions, I did note gaining 100 points toward my Halloween Mayhem Annihilation mission after killing the boss. That was however not every single time. It was nice to sometimes get that many points. During one of my short breaks, I decided to take a look at some of the loot I was getting. In my first two hours, I managed to loot 14 Halloween boxes and 29 tokens. In my remaining time, I would get a bit less than that as I seemed to hit a dry spell. This was still quite important over how many boxes I got during the Easter Mayhem.

I also looted a couple of Output Amplifiers Components. The bulk of my loot was however just shrapnel. That I can at least convert into ammo for 101%. It was nice not having to deal with a bunch of low-markup oils that never sell or sell for less than I can convert shrapnel into ammo for.

I still have hopes this time around to look at something other than the more frequent drops. Hopefully, I get a bit of a taste of what else there is. It would also be nice to loot my first rare Mayhem Token. Those are however quite hard to come by. While I do wish I had gotten a lot more points than I did. It could have gone much worse. I’m not down that much and feel like I can keep grinding at the rate I have been for quite some time if everything else remains the same.