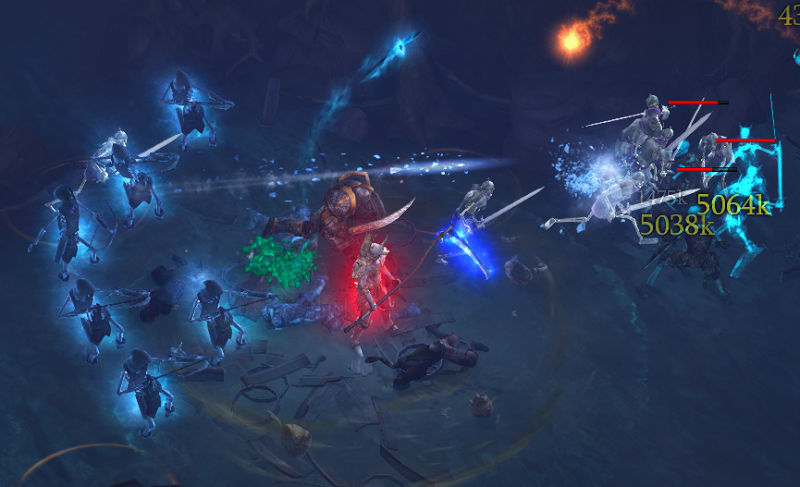 Was going yarr the weekend in another game expect all my crewmates are busy. So I thought I would check in on some of the other games I play. While I love Path of Exile I need a couple weeks break from that so I don’t get burned out. Diablo III is like going to an old person’s house and you realize --things don’t change much and that’s just why you like it.

While I don’t find myself always excited to start off the next season in Diablo III. I usually end up playing it for a couple of weeks. It started on February 24 and well I was nowhere even thinking about season 13 (1.) It’s just an enjoyable mindless fun where I’m not having to break out excel sheet or having planed my gear in a application. It’s just some good old hack and slashes running around in rifts burning packs of mobs down to the ground. 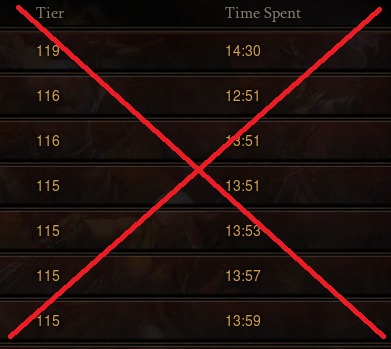 While I was gone it looks they did they did a bit of a bot sweep and cleared some of them. While it’s been sometime now and people are reporting they are back. I noticed the ones in the clan I’m in are still gone. While it's more or less a dead clan these days it was always odd seeing the same couple of people on 24/7 all the time year after year.

These days I just don’t understand the point of botting. If you no longer enjoy a game to the point you want the software to have all the “fun” for you. Why even bother? It’s not like this is a single player game where you simply just modded your files to change game aspects so you get to enjoy it again. This game is online, has leaderboards and while you can play solo you are not doing so offline. Legit players want compete for top rank and if its just bots that take those spots it’s a letdown for those that are actually playing the game.

There was also an exploit for Necromancer that I did not even find out till now. It happened back in February before the new season (2.) One of the bigger issues with Blizzard and exploits is sometimes they determine them to be “working as intended” and other times NOPE it’s a ban or suspicion for you.

They also seem to take their time in getting around to determining if it’s something they will allow or not. While I have no clue what that entailed I usually just stay away from anything that seems rather “cheesy.” With some game developers you just never know what they will consider being fine and what is going end with a punishment. I just always hope they look into how easy or default a player had to go out of there way for it to happen. In a few games things that were “exploit” where often happening under normal usage and that is never good for anyone involved even more so the players that did not go out of their way to break the rules. 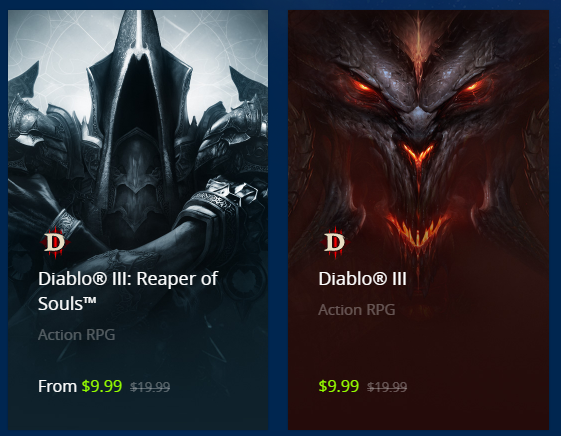 If you have never played the game but always thought “if it goes on sale” or if you are simply someone who wanted to pick up expansion pack or paid content whenever it was discounted now a decent time.

I have written in the past about the game. While it is not complex at all and can be a bit mindless. It can also be fun in that aspect if you just want grind things out, and not take things to serious or think much about it.

They do offer some kind of free trail as well. I’ve never looked into it.

Everyone keeps saying and praying for Diablo IV and how it will be Path of Exile killer. Well, I won’t be holding my breath. I’ve not looked into it much. But seeing how on the main page in battle.net launcher for the game they are advertising World of Warcraft’s upcoming expansion on 8/14/18. I think that more or less tells us all we need to know for now. 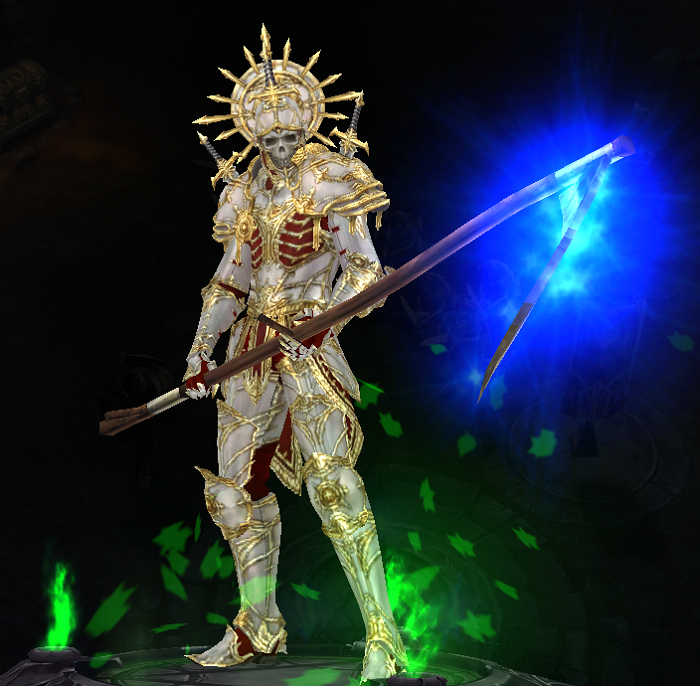 As of last night, I’m a fresh level 70 Necromancer. I had a friend who has never played any of the Diablos before jump in on the discount game and I’m hoping we both find some time this weekend to play it together.

Right now I’m in that strange place where you really don’t have much of anything and you just cobble together what you can till you start to find enough stuff you need. Right now I don’t have any movement skills! I like to go fast just needed some other things first and wanted to be in higher difficulties

I’ve completed enough of the season journeys to get full set of Inarius that is focused on giving a bonus for using Bone Armor skill. Last season I felt stuck for a way too long on just trying to get up to the difficulty of Torment let alone something very low like Torment III. This season I’m already rocking Torment VI in a fraction of the time. I’ve just given up for now on having a movement speed skill. While I clear slower I’m also getting enough of bonuses from being in much higher difficulty that it’s worth it.

I looted an Ancient Parthan Defenders that reduce the damage I take if I have a stunned enemy. As such I’m using a primary skill called Bone Spikes with the Sudden impact that is an area of effect that stuns for 1 second.

I also made a level 4 Necromancer so I could gamble using Blood Shards and have a high chance to get Circle of Nailuj’s Evol that lets me summon 2 Skeletal Mages instead of one that also adds 4 seconds to how long they last. 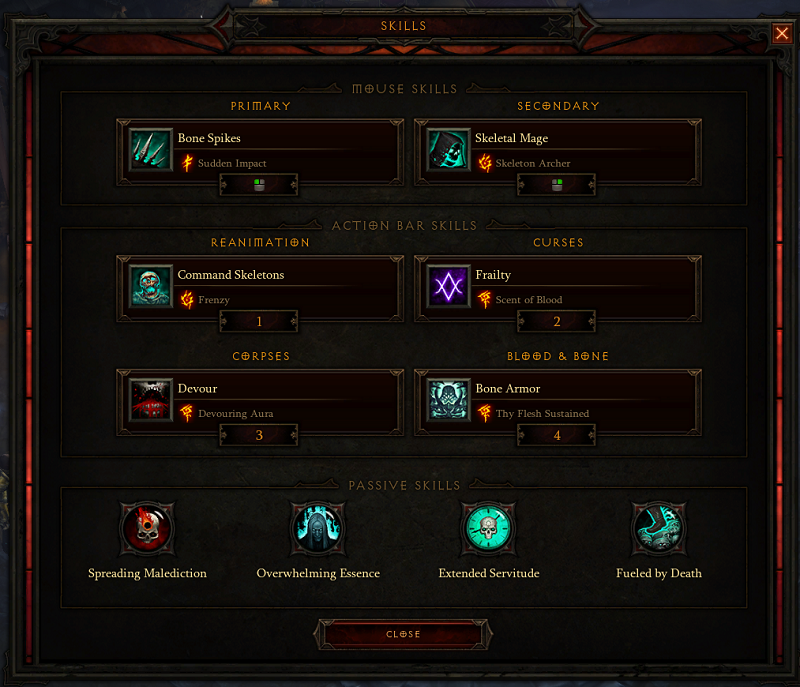 Since I’m a bit light on health I went with Skeleton Archer on that skill to just have more fodder up on the field. It’s also rather easy to keep a max of 10 up with Devour that has Devouring Aura that consumes corpse for Essence to use on skills.

So I could drop Devour for Blood Rush (speed skill) but for now, I’m struggling a bit much with essence generation and since I’m light on health the last thing I want to be doing is rushing all over the map into packs of mobs while still having mobs behind me attacking and taking me out.

Since I’m going to go into a heavier minion build as that is my preferred the style of play for Necromancer I also have Command Skeletons with Frenzy. They add more fodder on the field to help keep things off me and give me the ability to target a single target such as elite pack.

Since Bone Armor skills get a nice boost from set bonus. I’m also using Frailty with Scent of Blood. My minions do more damage to cursed mobs and they also die at 15% health making things just clear faster. 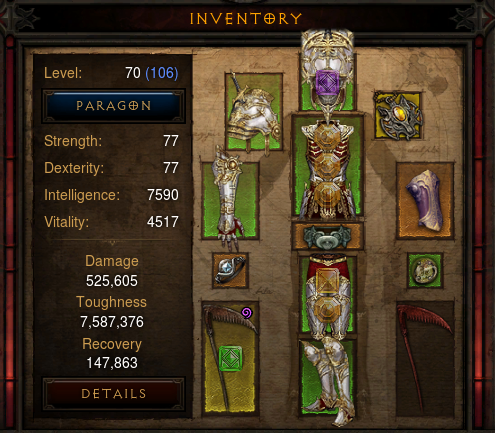 I’ve not gotten many useful items yet outside of the set and the ring so I’m just trying to get whatever I can and will go from there. It will take a few more drops or a really nice one to determine where I go from here.