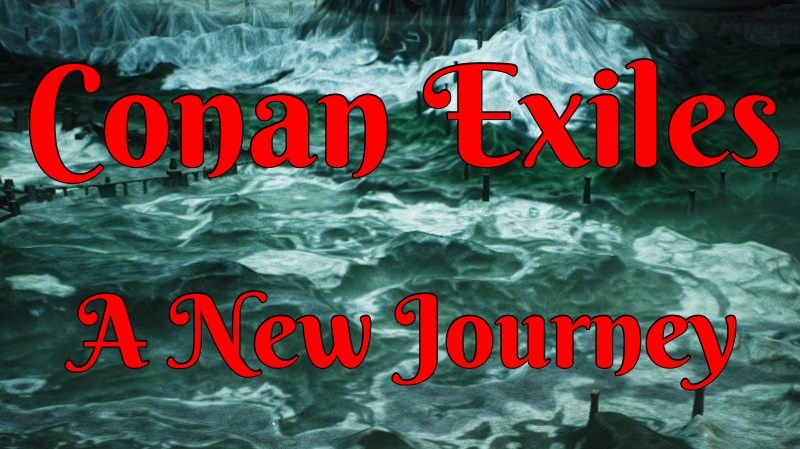 A fascinating game so far you literally start off in the desert with nothing. For the sake of my playthrough and any other content. I’ll be playing with a certain filter on. I must be modest after all! That won’t stop me from trolling the other players on the server who choose not to go that route. That is an entry another discussion itself although! 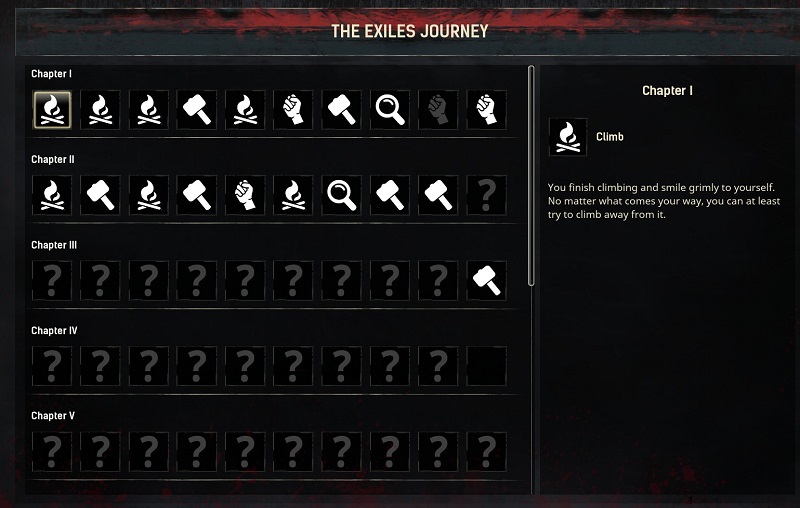 I have really been loving how they implement the task-based style experience reward system they have going. It is one of the better ways of earning it and I much prefer that over grinding. It nudges you to try different things and go out into the world and enjoy it.

It also is a great way to implement a tutorial of sorts but for the entire game. Pushing the player to certain places but not outright requiring you if you prefer to do other things. Even better you can complete things out of order. They just tend to remind you of what you need to do in the current chapter you are in. With everything else being left a mystery unless you happen to do something to achieve it.

At the start, it was really simple things they want you to do. From learning how to climb up something in this game to build your first shelter and even getting a kill. It starts to go over the basics of combat. I have earned some for exploration in finding certain places. There many for crafting and so much more. Quite a few chapters and just an amazing way to discover things and progress in the game at the same time.

It will feel like a journey if I ever 100% finish it. I love it when games do not go out of their way to overcomplicate things with the unnecessary naming of something. This set my expectations toward a certain path right off the bat. I hop toe everything else is enjoyable but not overly complex. Games these days seem to want to recreate the wheel expect it’s just not that good. Only time will tell. 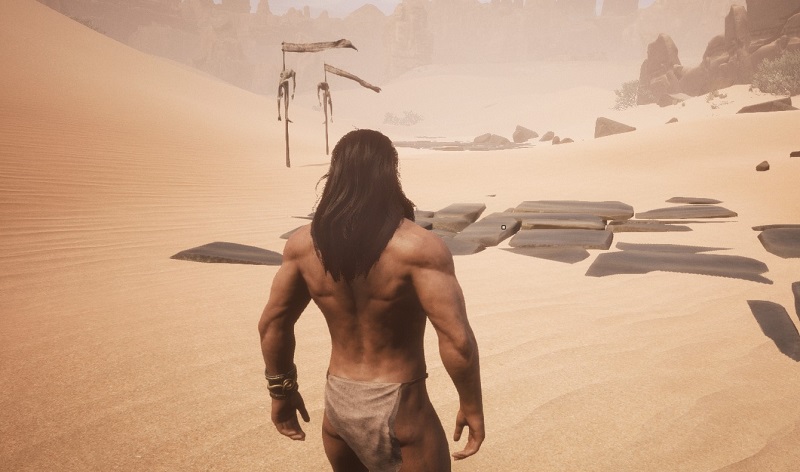 After picking my god which I’m not quite sure how that plays out later on I’m released and off I go. This is going be one of those survival games where I need to manage water, food, hot, and cold as well. I could tell that right away as my temperature bar was moving upwards from just being in this harsh environment.

I explored this area for a little sometimes around me. While there was a road and I’m sure I was supposed to follow it. Well, I did backtrack after to it after some time had passed. Getting a journey update for reading, and some other things more then let me know that where they wanted me to be.

I am at least glad they let you explore the world and the only limit seems to be if you are able to survive in that area and kill or avoid anything that is found in it. I’m really not a fan of other methods of trying to hold players confined to one region either thought locking content out or simply having some unnatural force keeping you there till you do something. 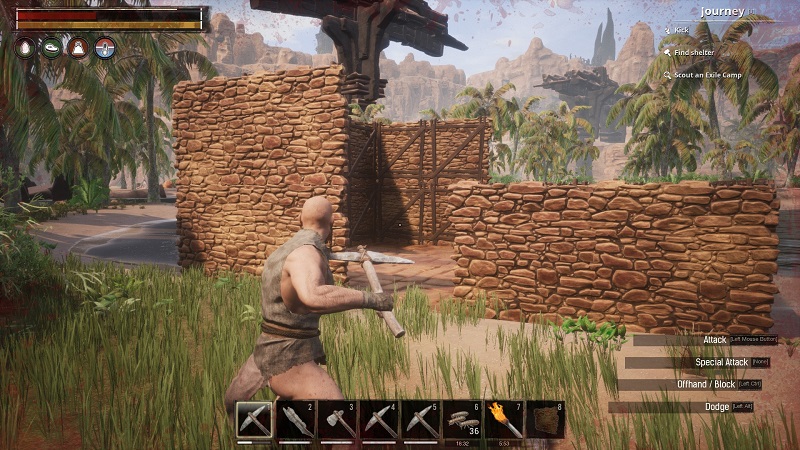 After some time I finally found some lush area with a lake and some rivers nearby. I still wanted to get out of the heat and have a base of operations so I started to gather local resources to build a small little hut.

I also crafted with some plant fiber some light clothing. It does not do much but it has allowed me to take some more damage when killing. On top of that, I crafted a pickaxe, hatchet, and a sword for combat. Rather typical items for a survival game and they perform as expected.

One of the stranger things I’ve come across so far is no starting health regen. I have to eat and a considerable amount to heal up. You get a couple ticks of health and then need to consume even more. So I also set up a little spot to do some cooking and I put down a bedroll as well to create a respond point. It appears this guy eats like a barbarian as I’ve fed him a months’ worth of food just to keep him alive after a couple of fights. He has zero table manners either as well I have no table! 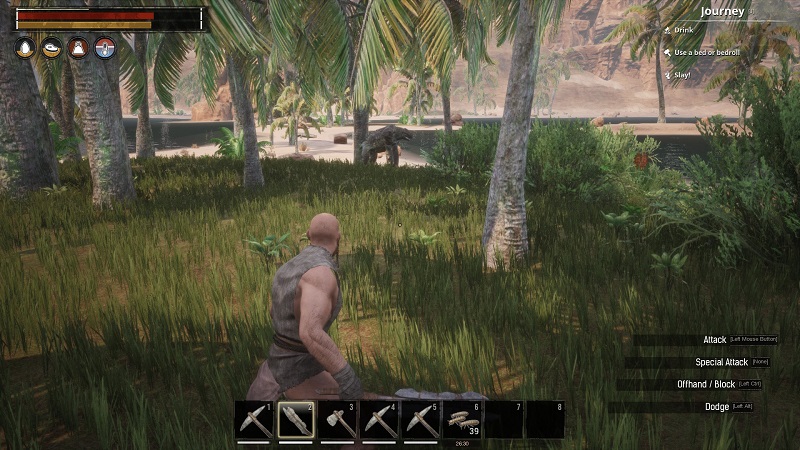 Thinking of the locals here is one of them now. A rather strange creature that I’ve been farming for hides so I can try and craft some better items. On top of that there a couple of local Thrall camps in my area as well. Between them and these monsters, they are not too happy about me trying to move into this location.

Between my limited ability to heal myself back up and the number of resources, I need to keep building up a shelter. I have been for the most part avoiding confrontation with everything. Even when I’ve been tempted to steal some eggs from random nests I can keep finding.

For the most part, I’ve just been staying along this river I am at. The map seems like a decent size and this is just some starting new player area. The others have a bit of a head start on me so I know they are off somewhere. I fear they have already conquered fire and have acquired iron! I don’t think my basic sword will do much compared to what they have access to. It can barely kill off the local monsters.

Since I’m hoping not to be here at this location for too long I’ve turned into a minimalist. With just a bedroll, campfire, and this armor crafting station inside for now. I made twine using plant fiber I gathered along with pelts I got from hunting to make some better light gear. It is still not that great but it will have to do for now. I was hoping I could make a better weapon at this point but that does not seem to be the case. Unlocking new crafting recipes so far has been the more complex things in trying work out. Good chance I’ve just overlooked things as I learn.

Why are there human limbs in my crafting station? Am I some kind of cannibal?!?! Some things I guess are just best left unanswered. Like I said this guy eats a lot of food.

Screenshots were taken and content written by @enjar. Screenshots are from a game called Conan Exiles. If you are thinking about getting this game and are looking to support me further consider using my Epic Games creator code: enjargames at checkout or using this referral link to be sent to the store's pages.