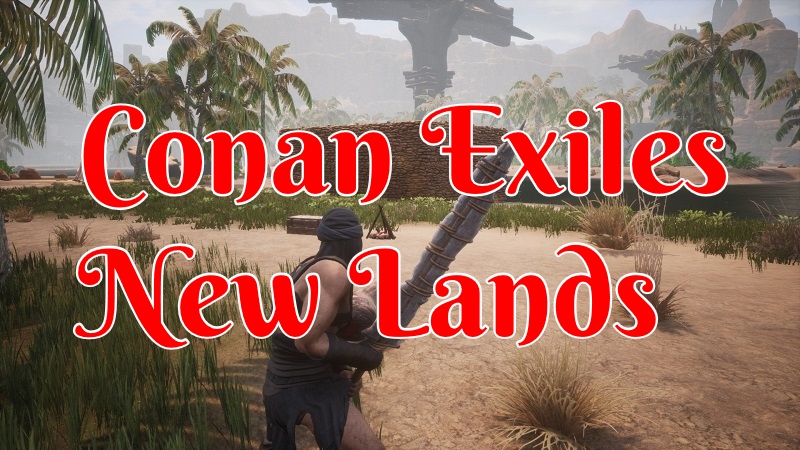 It was time to pack up and start my journey up a river to find a new place to call home. This starting area next to some water really lacks some key resources. Most notability iron, hides, and better thrall locations. While I will find myself always having to travel a little distance to try and find something I am in need this far out is just troublesome.

I waited until I crafted myself up a full set of medium armor and a stone two-handed sword. My journey would be filled with waters of crocodiles and lands of hyenas. I filled my waterskin just in case I needed to trek over some desert-like terrain and said one last goodbye to the old house. I also packed a few bedrolls to drop as safe points to respawn on in case I meet my fate of death on this trip.

It shelters me from the heat of the day and gave me a safe space to retreat to when things got tough in these parts. I ended up creating the small house next to some thrall spawns which proved a few times a timely death. Even more so as I struggle to eat enough to gain back my full health again.

I at least gained a dozen or so levels since I’ve been here. The camps and wildlife while annoying at times proved quite useful for farming. I leave behind my first best bed, a trunk full of rocks and some rotting meat. May the wildness reclaim and enjoy my wasteful over-harvesting of it. 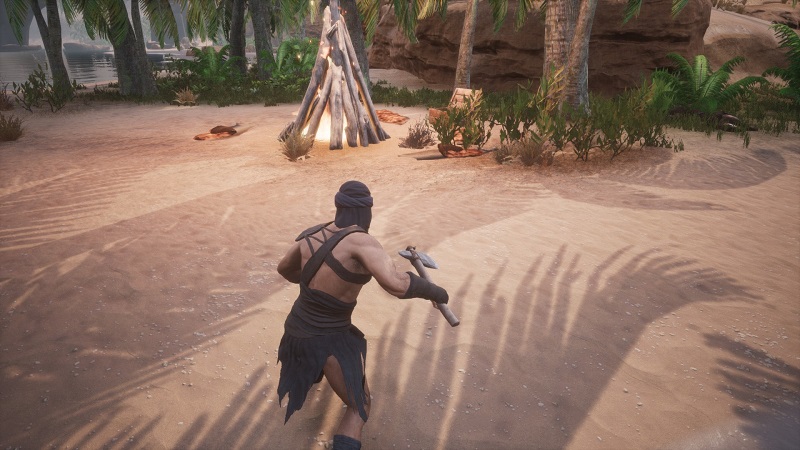 Along the way, I came across a few of these camps strung along the desert lands. As you can tell from this one the natives was not as thrilled I was to see them. I was hoping to liberate from them any iron bars they might have been trying to smuggle. Sadly they were all out of those.

I ended up just leaving with flesh and other unmentionables. Not quite the trade I was looking for. At least I left with something. Although it was quite heavy along the journey so I just tossed it into the river. I’m sure the crocodiles won’t mind one bit. 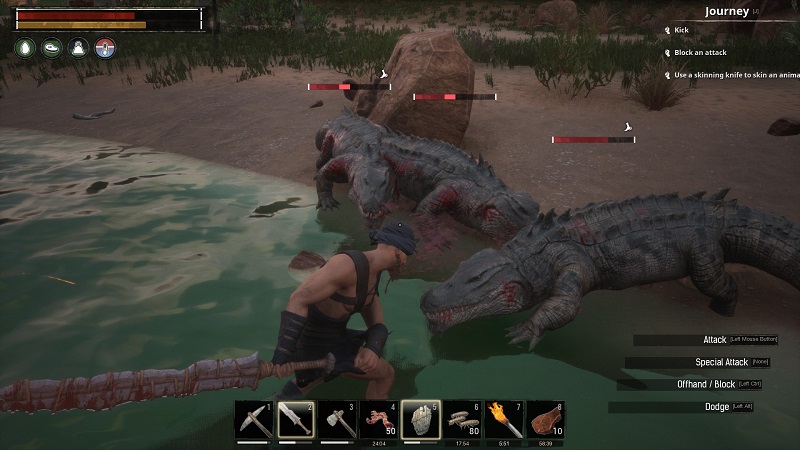 Speaking of crocodiles it was rare for me to just run into one of them at a time. I would find one and suddenly have a pack of them bearing down on my location. Thankfully I waited till I could craft a two-handed stone sword before starting this journey. Its heavy attack is a sweep that does some frontal area damage. As you can see in the screenshot it was quite useful.

There was a lot of stops and go along the way. I was eating bugs, cooked meat, and anything else I could find to recover my health loss. I did at least stay cool while running up the river banks. I ended up not needing that water skin after all.

I even came across a waterfall at one point where I had to venture off the path to find a way around it. It did not take me too far off my journey. The landscape in this game when you can stop to enjoy it is quite beautiful. I have found that is rather short-lived as the next thing coming for you is right behind you. 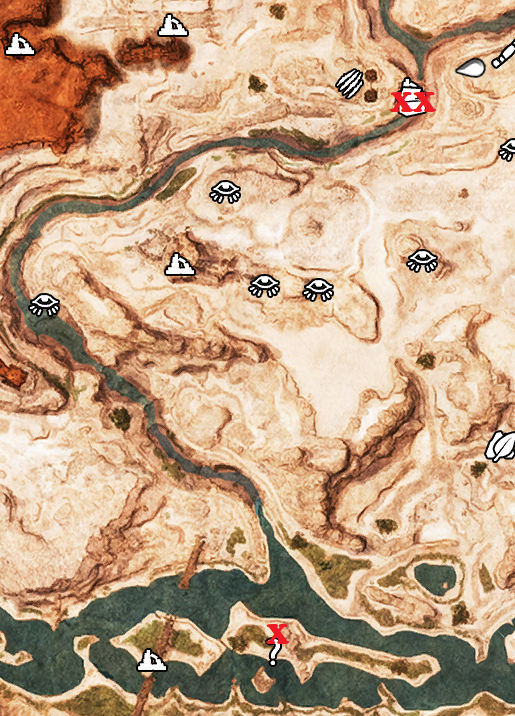 This map gives you somewhat of an idea. Disregard all the icons and some custom markings of it. I ended up taking this screenshot much later as I had forgotten to do it sooner. I started at the first red X at the south where the entrance to the river is and my former home. I then walk up the river until I got to the double X.

I started seeing near the double X some iron and coal nodes to farm out. I explored the area for some time to make sure I found a decent little area. I wanted to be out of any spawn locations but not too far from water, wood, stone, iron, or something to hunt either. 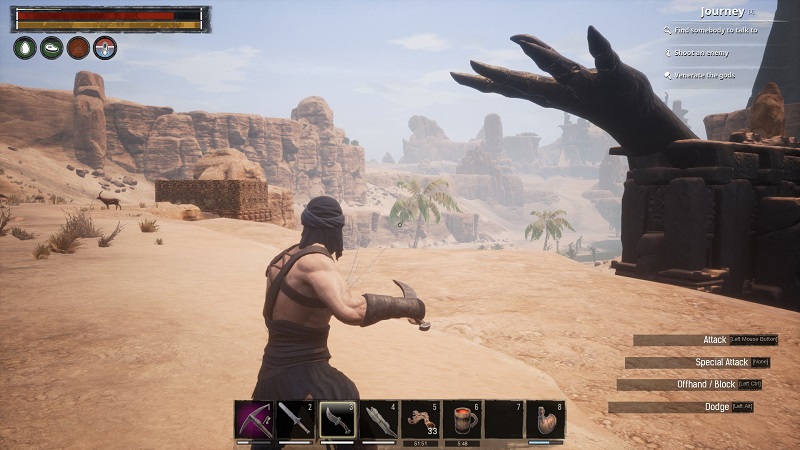 This wonderful clifftop seems to do the job just fine. It also had this giant pillar down near the water with a hand sticking out. An amazing landmark that I could not miss a mile away. Unless I get a sandstorm then it is a lost cause if I’m not close to my shelter anyways.

I spent a few in-game days gathering wood and stone to build that house. It has a few windows just so I can look out. I also built an elevator off the back later on. In part as it was a journey quest and came with it some decent experience for crafting one. I also just wanted to test it out.

There are two ramps up on either side of this cliff that is not too far apart. So it does not matter which direction I’m coming from if I’m below in the river. I have an easy and quick access to get up top. Which is great if I have become overburned with crafting supplies. There also another way out that goes rather deep into an area that has lots of iron nodes to mine along with some camps to raid. 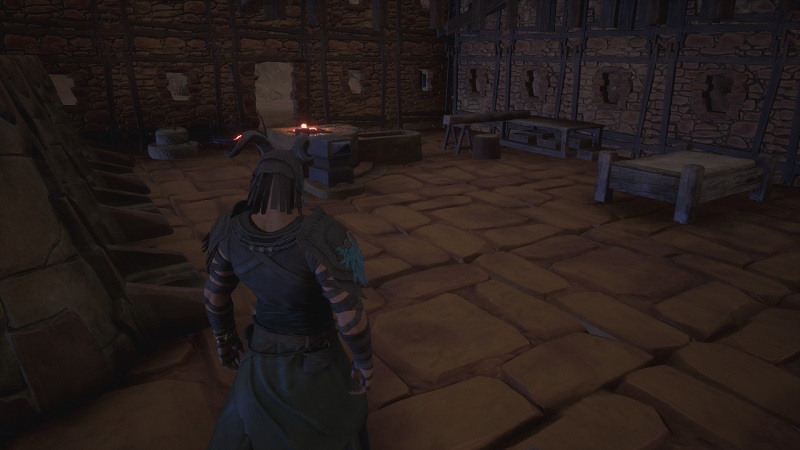 My first priority was getting up a bunch of furnaces to smelt the iron into bars and a smithy as well. I’m always one of those players on the hunt for deadlier weapons and since you craft all but a few in this game. Well, I’ll be getting a lot of work out of that smithy.

Later on, I would craft an amour bench for making better gear, a firebowl for crafting healing potions and other alchemy type of things. This game has quite a lot of crafting. While some of it is rather basic in just combining A with B others require a bit of a chain in upgrading or process material. It certainly is not the most complex or involved crafting system I’ve ever dealt with in a game. Most of it was just waiting around for a step to be done and making sure there enough coal or tree bark depending on what the station needed to keep running.

I have a confession to make. I have a couple stacking durably mods from the workshop installed. The standard amount is quite low. Sometimes it's nice when you are not stuck dealing with the “100 retail experience.” It is a little silly if I have to bring a few pickaxes just to go on a single mining trip. Thankfully some kind soul thought some quality of life was needed. Private servers are sometimes the way to go for these kinds of games! 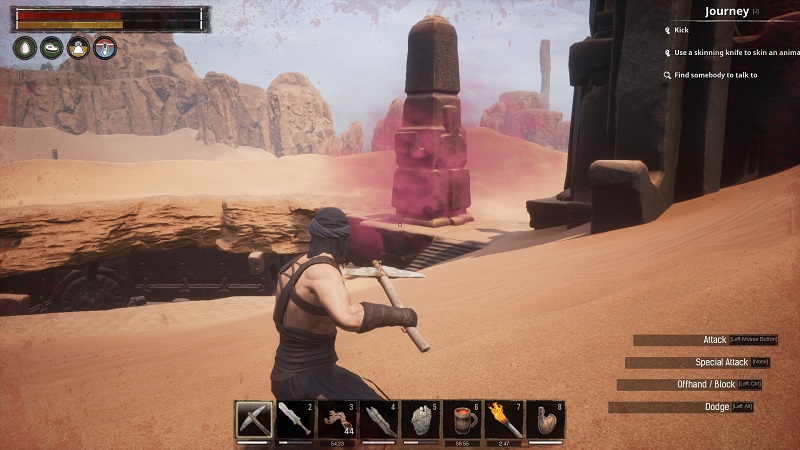 I spent a fair amount of my free time exploring and finding odd things. For instance, this obelisk caused corruption which lowers my health and stamina cap until I find a cure for it. As such I tend to stay away from them. This one happened to be next to a giant hole. I was not brave enough to jump down it.

Having to retrieve my corpse can be a risky adventure all on its own. Even more so when the game bugs out. I once went afk out of frustration out of failing to find it only for it to start rolling down a hill when I returned to the game a while later. Other times while looking at the death screen I would see it fly off into the distance. I can only assume if this game had a moon you could land on. My corpse was like a rocket and it made touchdown!

I can’t wait to craft some better armor and two-hander. Exploring really seems to be something fun in this game. I know there also some dungeons to explore. Perhaps one these days I’ll make some time to run one of them as well.

Screenshots were taken and content written by @enjar. Screenshots are from a game called Conan Exiles. If you are thinking about getting this game and are looking to support me further consider using my Epic Games creator code: enjargames at checkout or using this referral link to be sent to the store's pages.