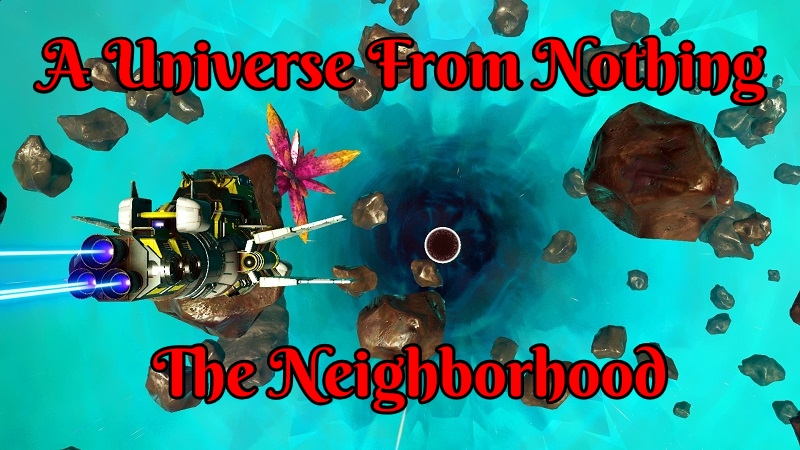 A cosmic neighbor never cared much about locking their doors, building fences or places no trespassing signs. Mother Nature provides more than enough for any wondering traveler they could not fill their ship with all the spoils they found anyways. It was just better to let them come and go for the most part. As long as they did not ask too many questions about what really was going on.

Enjar discovers he is not alone in the universe and finds himself on a space station with others. He has a strange encounter and then goes on a heist after being tipped off on how to get out of the solar system. Afterworlds he sets up on a new planet and is now following someone else plans.

Enough time was spent enjoying the setting sun and letting one’s mind wander off into a fast ocean of nothingness. In the morning it would finally be time to explore Ahoku and the remaining solar system. Supplies, after all, going be needed to further expand the base of operations and they were not going to get themselves.

There was a little bit of mining resource in the morning to top off fuel gauges for the launch rockets on the ship. Along with some slight repairs to the ship itself and to try and minimize any troubles while out exploring. He could be gone just for the day or weeks depending on how far apart the different plants and anything else interesting to note was from each other. 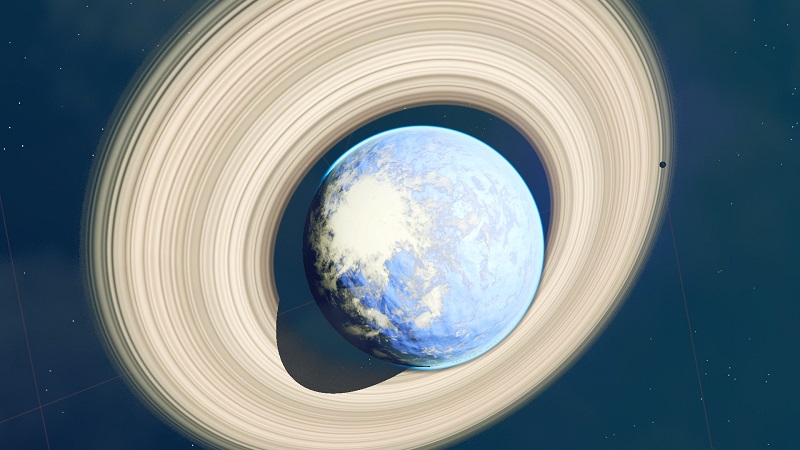 Is an Icey ringed planet whose main occupant is Enjar the Traveler who has his main base there. The rings themselves around the planet are at an 80-degree angle giving the planet a hat like an appearance.

There is a fast underground network of tunnels that are filled with rare icy crystals and cubed artifacts of a yet to be discovered species. Inside the caves is mostly comprised of cobalt stalagmites an uncommon ore that contains a decent value for trading.

With it being a cold planet it sometimes reaches triple digits below zero degrees at night time and has a slight chance of blizzards forming from the poles. Due to the coldness Copper, Dioxide, and Silver deposits been erupted from the plant's core and can be found in moderation on the surface.

Most of the surface is covered in a vast forest of trees that have been left unchecked since wildfires are a very rare and isolated occurrence sometimes not happening naturally for many centuries at a time. The only thing that breaks up the forest externally steep mountains that appears to be in almost rectangular shapes dotting the surface. 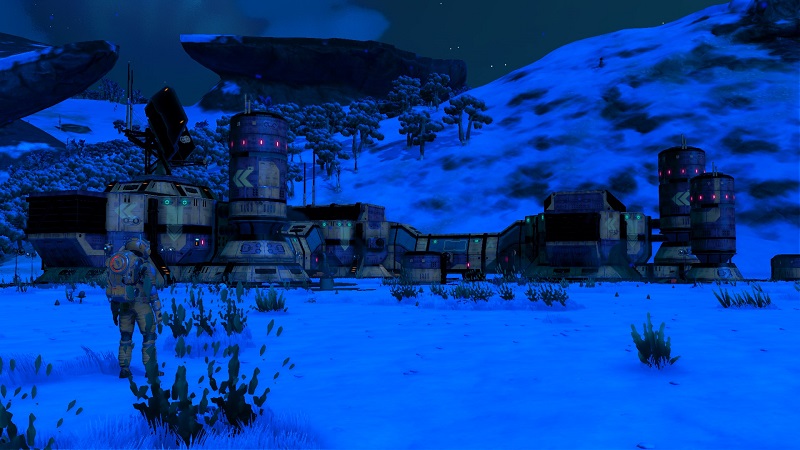 There are also abandoned research bases scattered all over the main ice-locked continent. They may have to conduct deep space telemetry of a black hole found several hundreds of lightyears away a few systems over. This could also have been a cover story for what appears to have been massive energy weapons signatures remaining that have occurred in the solar system itself. Further investigation is regarded in the dozens of outposts found. 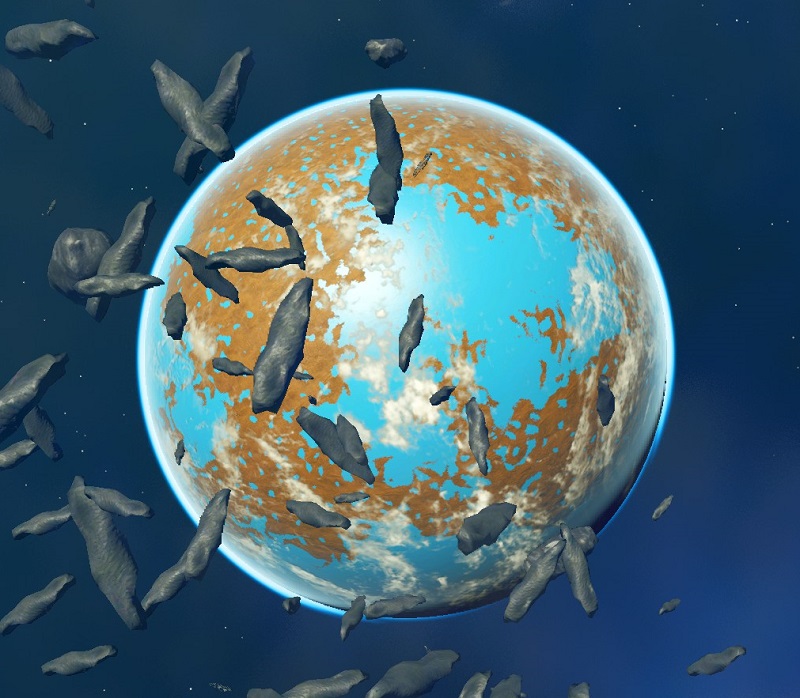 Is a beach like a planet whose dust storms permeate even the strongest of buildings. Discovered by another traveler who may have taken up inhabitance for a while whose fate is still unknown. May have just been a drifter on his last credits looking and hoping to strike it rich from the medical property the flesh of cactus appears to have here.

The bodies of water are extremely saturated with salt and appear to have traces of pyrite as well. You could almost go walking across the surface in a spacesuit without sinking. There appear to be very little if any life forms in the water itself almost like the entire fish population was wiped out decades ago by overfishing. 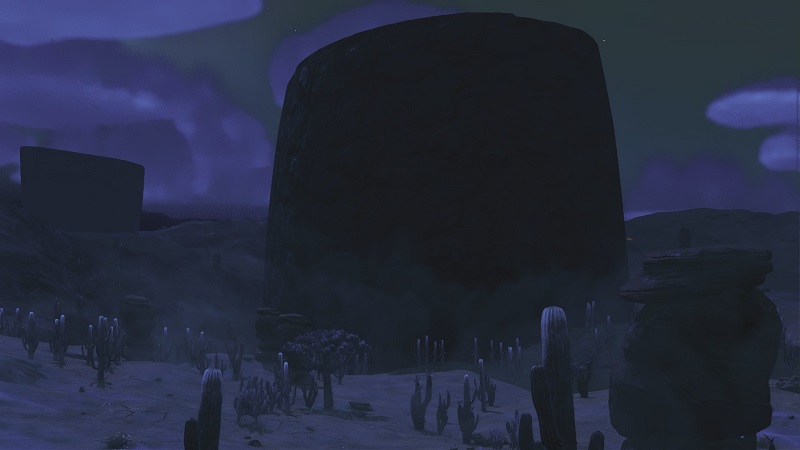 Large portions of the landmass are just sand covered in cactus and these strange cylinder rock structures that look like they were punched out with a tin pan. Perhaps this entire plant is just one giant oven baking away during the day in its high heats and cooling off during the nights.

It is otherwise a rather barren planet. One would not want to spend a lot of time here unless they were hiding from some kind of galaxy law enforcement. Even the sentinels here seem almost displeased with this assignment. 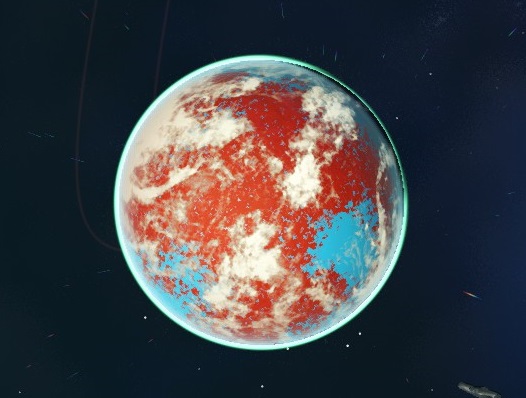 With such an unpronounceable name like that, Enjar thought he would give changing its name a try. The computer rudely told him this file was corrupted and to go mind my own dam business. This is precisely what he should have done instead of traveling to this planet.

He landed without enough launching rocket fuel to get out in an emergency if needed and would have to farm for some more fuel. This was a grave mistake and almost my last one. The entire planet was covered in hostile sentinels who deployed air support to try and take him down the moment they realized I was there. 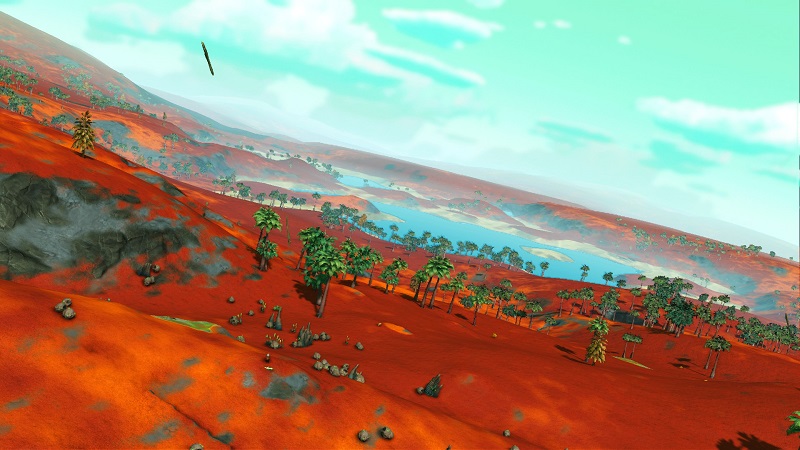 There were these strange glowing bulbs all over the place stemming from plants. It was almost like the sentinels were here protecting their garden or something. I’m almost afraid to think what gives this planet from space a vibrant red surface which only grew in intensity the closer you got.

All he knew for certain he was not going back here unless heavily armed. There seems to be something more going on. Perhaps a future and better-planned trip are in order. Perhaps he’ll heed the computer and just mind my own business. 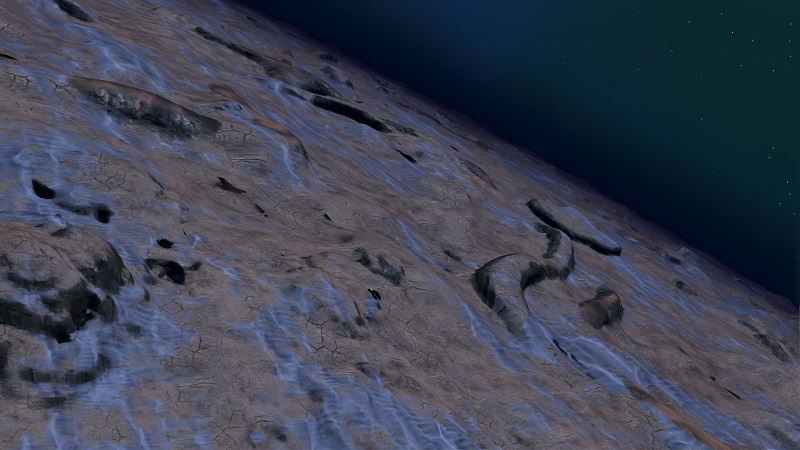 So small and at the outer reaches of the solar system it was almost mistaken as just an asteroid. I’m not quite sure if it should be a planet or a moon but what was for certain is it was dead. This object must have gotten knocked out of a closer orbit to the sun at some point. There was no atmosphere or anything else left living.

It also had very little resources to speak of. All of which could have been found elsewhere on the other planets in the solar system. Which is a shame as it took many days of sub-light warp to make it out this far the first place.

Enjar had to stop twice on the way there to farm asteroid to gather enough resource for fuel to make the trip. It was at least rather relaxing zapping away with the mining lasers and watching the smaller asteroids explode into a million pieces leaving behind the materials I needed.

The trip back to the home planet was going be just as daunting. Nothing left to explore and endless space dust and asteroids for many lifetimes to enjoy viewing. 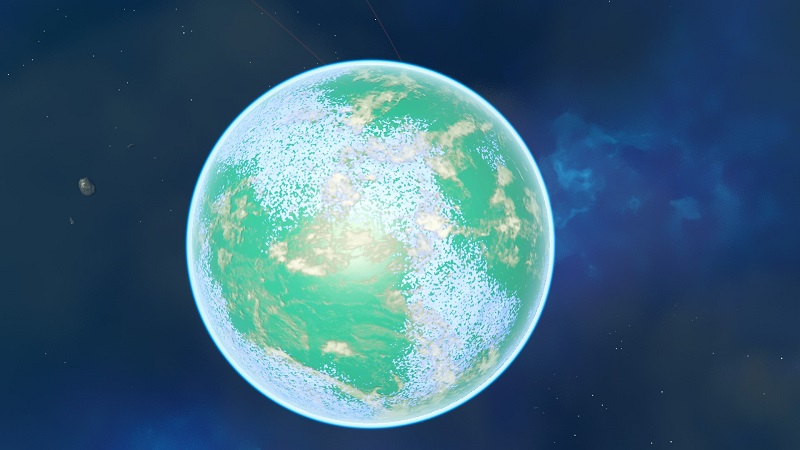 It was a good thing, after all, he went out that far after all. There was one last remaining plant hidden between the giants around it that were missed. It was another icy planet mostly covered in water.

Strangely there were no encounters with a single sentinel there. Almost like they were on holiday or something. Perhaps they were just so peaceful here they kept their distance there was centrally some interesting things to explore. 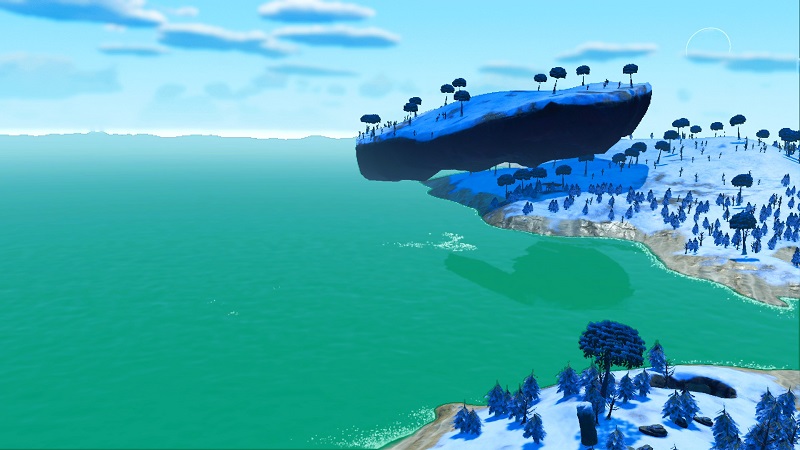 It had these gravity-defying islands that were just floating in midair. There was nothing in my understanding of how the law of physics would even allow it. They were not magnetic and did not even move when he came into close proximity to them. he could land and take out without a single sign that it was not just somehow connected to the land. There were no vibrations, hidden connection points or anything else he could wrap his brain around. They just purely existed and who was he to even question it in the first place?

There were also some nice deposits of copper, dioxide which seems to be a very common theme for this solar system. To his shock, there was also Sodium and that itself made the entire exploration trip here worthwhile. That can be used to recharge and build a number of future systems and projects.

The only major hang-up about this planet was a massive blizzard front coming in almost daily. You would be lucky to find a clear day let alone two hours to get some heavy mining underway. Building a base here would have been a frozen tomb. 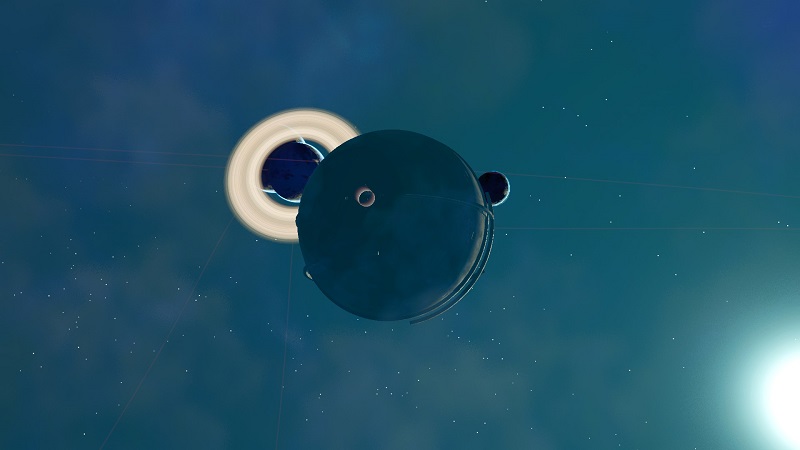 After leaving the last planet it was finally time to go back home to Ahoku this plan, however, did not last very long what so ever. Only a few moments into sub-light warp speed an orange icon started to flicker from what was assumed to be a dead switch on the control panel in the ship.

The glow itself was almost calling the traveler to press the button. Just press the button swarmed in his mind like it was echoing in a cave and he was on a boat. Without realizing what he was doing his finger reaches out and pressed it. A solid click from the indentation of that switch which ringed in his ears. Before he could look up and see events of his action were already unfolding.

A giant sphere appeared out of nowhere. It was not there and then it was. Time and space itself had bent to make such a magic trick occur one that could be repeated with just a click of a button. It was however just a doorway. The object itself was just a trick of the mind trying to understand the incomprehensible. You, my dear reader, would not understand either.

It sucked the spaceship is like a vortex and passed the ship through the very thin layer of fabric separating this universe from another. The distance traveled at the blink of an eye was both nothing and almost infinity itself all sharing the same space.

The dark tunnel that was holding the ship opened to reveal an entire space docking area. This was, in fact, some kind of space station hiding from the prying eyes of the sentinels who would not dare to try and penetrate the laws of physics required to get here. 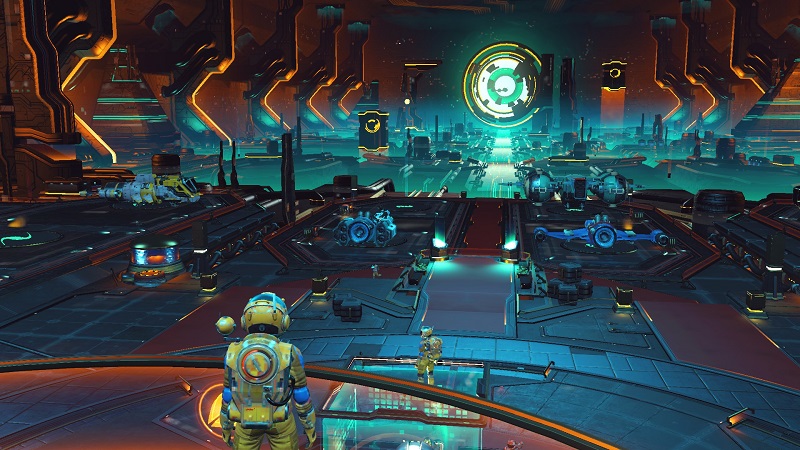 The lower floor was buzzing with different booths that seemed more interested in collecting traveling data collected by travelers than trying to sell them anything in particular. They wanted to know anything and everything from plants, trees, rocks, other life forms. If you had collected data on it they were floored to buy it from you. The prices were quite reasonable for how much of a universe worth of information this place must have already had collected.

There was a secondary level that branched out into a few different places. From a room that sold a bunch of equipment upgrade plans. To a giant portal room for teleporting off the base. Along with some doors that looked like they headed to some kind of supercomputer. Everything was just wide open to explore and poke at.

One of the side areas contained the entity that had given Enjar the Traveler the information to get to this solar system. It knew he was willing to go quite far to get answers about what really was going on and how it involved him. It was not the first time nor would it be the last time it gave a traveler lost in the stars a helping hand to find it.