Once you reach level 50 in Lost Ark the daily grind is real. The game has a lot of content to offer the player while they work on progressing even further into the game. From group activities to running and playing solo. Lost Ark has something for almost anyone. The biggest thing I’ve found myself spending the most time on so far has been exploring all the islands Lost Ark has to offer. At some point, I’ll be making a post about some of my favorite tier 1 places to farm up for honing resources for upgrading gear.

These islands come in a variety of lengths and sizes but do not usually take that long to finish. The only expectation is when they send you all over the world going to different other islands and even backtracking to a continent you have already been on.

A large amount of the quests found on islands are what I would call roaster-bound quests. You can only do them once per roaster and they appear as purple quests to pick up. Once you have done them that is it for that server. This is why some of them offer shiploads of resources for such a short amount of time spent.

Another huge thing islands offer or at least a lot of them are found on islands is Una’s Tasks. These are daily and sometimes weekly tasks that can be completed in exchange for smaller rewards as you slowly build up a reputation with different factions in the world of Lost Ark.

Una’s Tasks also have some restrictions on them. Each character is only able to complete three daily ones. This where having alts in the came come in handy. A lot of these tasks since they are daily and are the same one make it easy for a player to set a Bifrost so they can just teleport to an island or region of the ocean to run their three daily.

A lot of the tasks on the islands are quite different than most games. Sometimes they could be gathering while other times you are just picking up a box of goods and moving them to another part of the island. On some islands, there is more talking than doing anything else. I have found it interesting that killing quests have not been the main staple for questing in these areas. In a lot of games leveling up alts can be quite a boring and daunting task even. Once you have done it a few times unless there are alternative paths to doing so it can drag on a bit. In Lost Ark, they have a leveling pass for the first couple of alts and other systems to help aid in quickly getting an alt up and running.

I found their approach rather interesting. They set it up more in a way that you were reliving the past life that you had on your main as your alt skips around sometimes doing similar tasks and other times just watching an event unfold before leaping forward in the timeline.

Alts play quite a key role for players looking to gear up as quickly as possible. There are many instances where honing gear materials are tradable or rewards are roster bound. So can alt can farm up things from a limited run daily tasks and pass them onto the main.

There is also faction grinding from Una’s Tasks as mentioned in the section above. You cannot fully max out per week without using alts. So in a way the game is somewhat forcing you to have alts if you want to do well in the game and get the most rewards.

It also becomes quite interesting how many things are roaster-wide on a server. Instead of having to get the alt its mount, silver, and gold these things are shared. Along with things like songs and emote which would be quite a bit of a grind to collect them all on their own.

Lost Ark does quite a few things to make having alts not be as mundane as it would be in other games. It however does feel like once you have them that you need to make a few alts to get everything you can out of the game. I find working on the storyline a nice way to break up the daily grind. It can also just be fun to skip doing everything else for that day and knock out some of the storyline content.

The storyline itself I feel ramps up. It feels like the Lost Ark grew into their roles of working on this game to the point they take some risks and they pay off. They manage some stunning and even difficult pull of visuals. It keeps me wanting to advance further to see what the next area of content will be like. 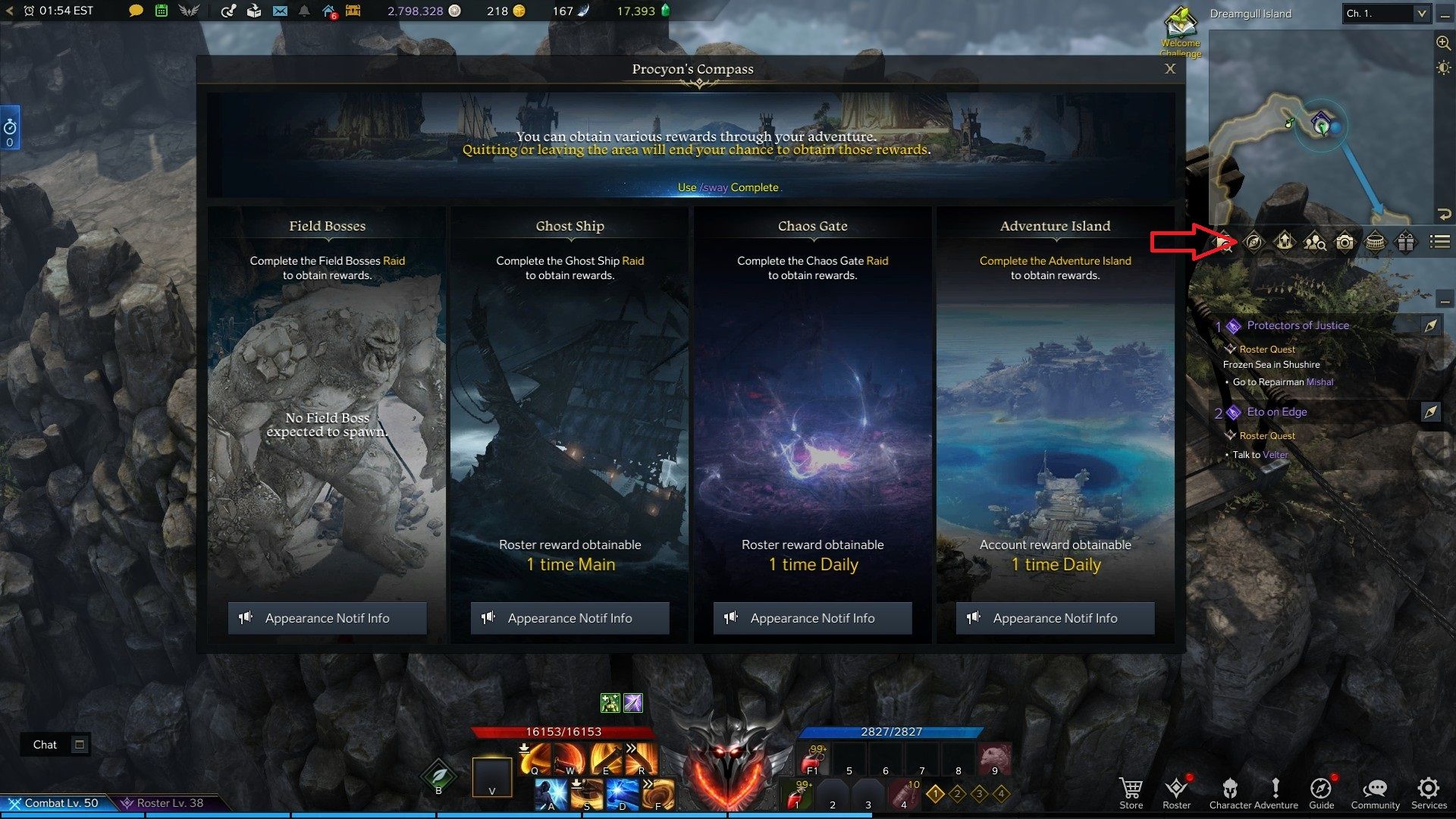 In the daily grind, it can sometimes be easy to overlook things. One such thing is Procyon’s Compass which you can access by pressing the compass button under the minimap. These are a series of daily tasks for the most part that have set times and require doing them in larger groups.

Not all of these tasks will be available every day of the week either. I suspect as I complete and get more into a cycle of working on other tasks that I’ll be finding time to feet this into my schedule of things to do in Lost Ark. 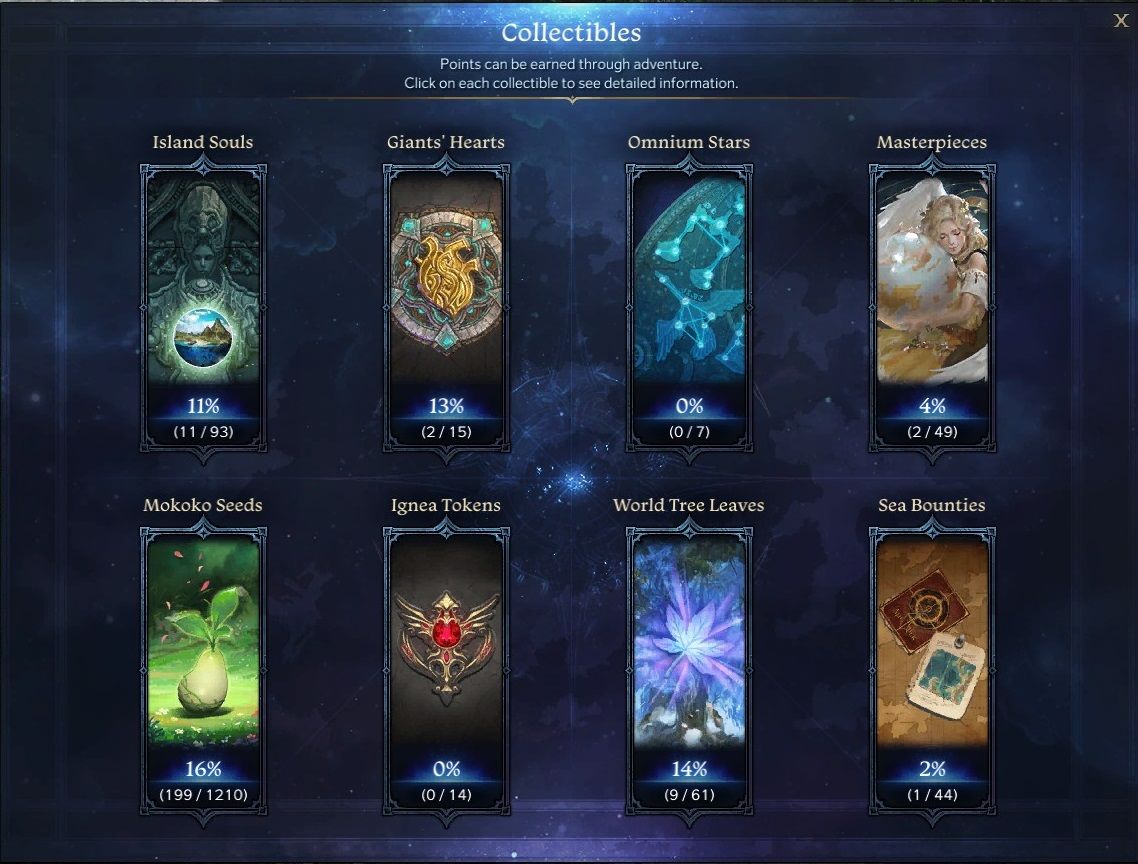 Just in case you did not have enough things as it is to do in Lost Ark. There are quite a lot of items to collect around the world between collectibles and finishing off Adventure’s Tomes as well. Some of these are quite a massive undertaking that you could spend months a little at a time working on them.

I find myself sometimes working on something like collecting all the Mokoko seeds on an island I’d visit for the first time as a way of keeping track that I’ve been to an area and did everything I needed to do. While other things like collecting masterpiece artworks are just something I get randomly along my way of doing other things.

These things would keep any player busy for quite a while. It can almost be easy to get sucked into wanting to grind one of them out. Then you realize that such things should be worked on daily as you will still be collecting them overtime for months to come.

At first, I was not that thrilled when I discovered Lost Ark had an energy-based system when it came to gathering from forging to mining and so many other gathering professions. While some activities like excavating relics can burn through the 10k energy bar at a decent rate. A lot of the time I was sitting at a full unused bar.

I still have a bit of a mixed feeling for the way gathering works in this game. I’m someone if I’m in the mood to go out and gather I want to do that for hours on end. On the other hand, if I’m not in a grinding mood I’m not going to force myself to gather.

Once you get into the higher-end gathering where actions start to take even more energy I can see the 10k energy bar not lasting that long. It is at least more forgiving than other games I’ve dealt with that have this kind of system. It takes a couple of days to fully refill if you use it all.

It is however something that can be easy to overlook with everything else you are trying to get done. Even more so when there is stuff like raids that have a daily rest time. At least you don’t have to use up all your energy before a given time every day. Before the end of each day, I make sure to have enough time to run content that can be scaled off my item level. Things like Guardian Raid and Chaos Dungeons allow you to run harder versions of them if you meet the requirements that offer better rewards.

While it’s tempting to want to run these at the start of each day or anytime you are in a city that has these events to run. The fact of the matter is you knew to know what you could be doing throughout the day that will allow you to make huge upgrades to gear.

That is however not always the case. If I’m on an alt for instance I know at the end of the day I won’t be doing anything to level up their gear. So I’ll go and run these back to back on them whenever I have a moment if I’m not letting their resting bonus times stack up.

There are also just so many other things in Lost Ark where you can only do a certain activity at every top of an hour or there is only one location you run them from. At least for these while on your main, you want to finish them before the daily reset and there are many cities around the map that you can do them from. 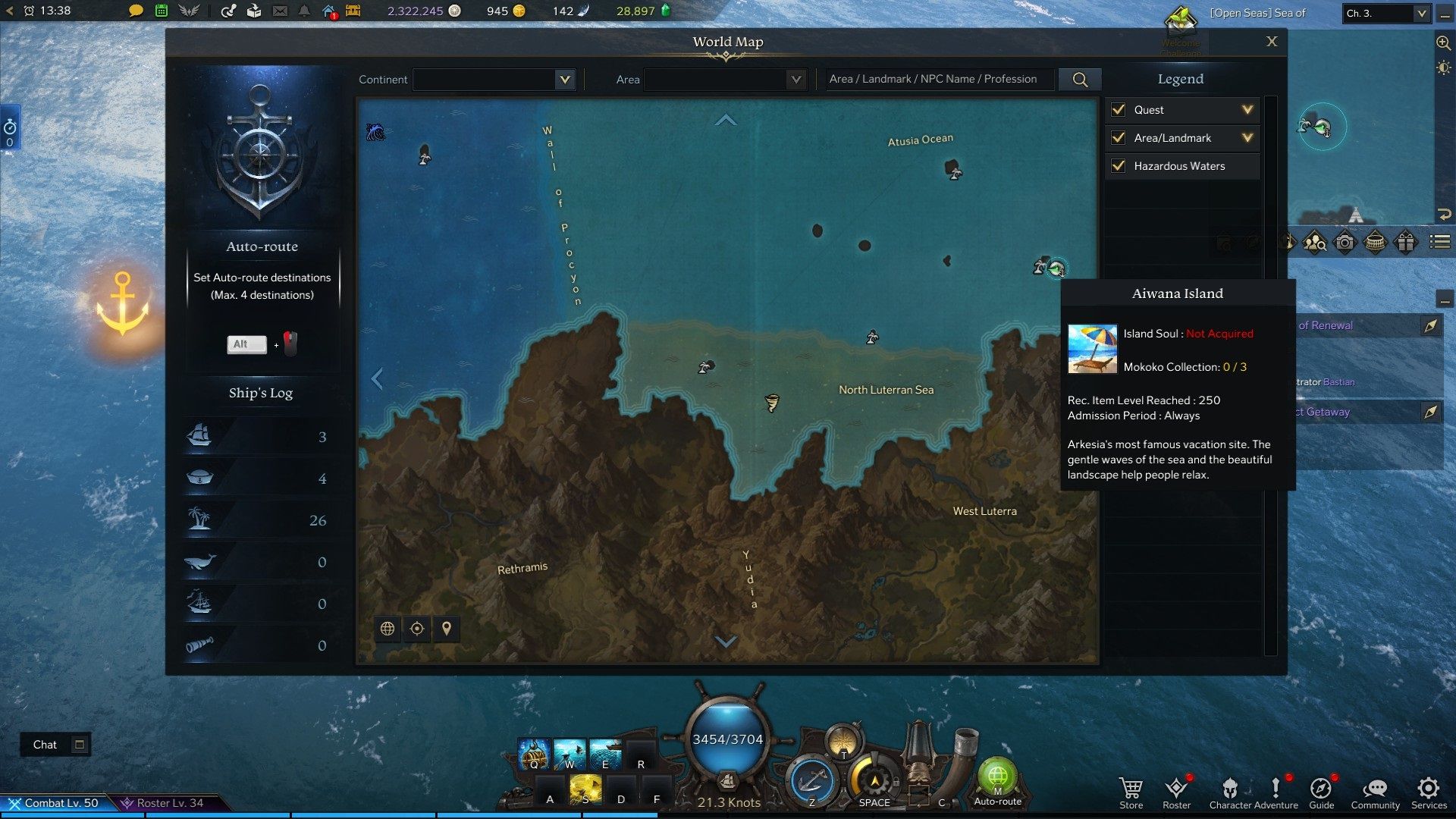 The great thing is these activities don’t feel like busywork to just keep the player playing. The rewards at least at tier 1 feel rewarding enough that everything you are doing is having enough of a contributing factor that it feels worthwhile. While it can sometimes be daunting trying to keep up with everything it’s ok to just log in some days and do a couple of things and that is all.