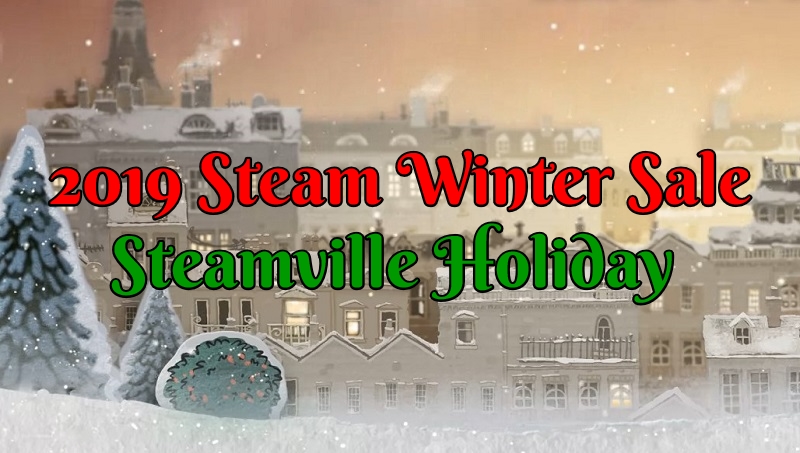 On December 19th, 2019 the biggest game sale of the year on Steam started-- Winter Sale Steamville Holiday. During this holiday winter sale, gamers rejoice and picked up deep discounts on games they have been keeping an eye on. This sale lasts till January 2nd, 2020 giving you two weeks.

This year they really went all out with what you can acquire from Festivity Tokens you can earn during the Steamville Holiday event on Steam. You can get classic things like the $5 off coupon, emoticons, the winter badge, and profile backgrounds. They have also added in some new stuff like stickers and chat room effects. They seem to have learned from some past mistakes by adding in some caps as well.

Image Source
Most noticeably The Winter Badge has 15 levels to it to unlock with the first level being 1k Festivity Tokens. With each level having its own graphic. This seems to almost be in response to past sales where people were just spamming the badge and getting insane amounts of experience.

A number of items you can get also get are locked behind dates. We won’t be able to see all the emoticons, profile backgrounds, and so on until certain dates have come. With some of them being reserved till Christmas. So it might be best to hold onto Festivity Tokens until everything can be seen. 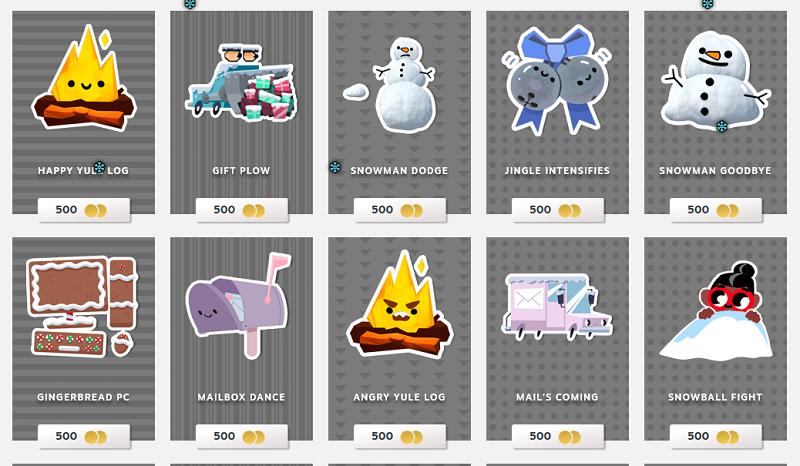 Something new this year is animated stickers. They are reusable stickers that you are able to use in chat. They, however, have an expiration date of February 24th. While I think it’s cool that they are not limited to one-time use like some sites and apps are doing. It’s a shame they are not a permanent item.

As far as earning Festivity Tokens you have the standard 1$ spent grants you 100 points while this event is going until January 2, 2020.

On top of that, they have a new questing system in place to earn a bunch more for free that they are calling Mayor Carol’s Holiday Quests. Where you can get on the mayors good list and get 100 points per quest completed.

Image Source
In total there are 19 base quests that grant 100 Festivity Tokens each. Some of these include using Steam labs Interactive center, adding items to your wish list, and watching a special broadcast. In addition to these, you can get a daily log in bonus of another 100 Festivity Tokens. For those that complete all quests they can get a special Steamville Badge.

It is interesting to see this Winter Sales event has limited time to use items for some rewards. Along with a special badge for completing all of Mayor Carol’s Holiday Quests which does require you to acquire and use some of the items you can earn by spending Festivity Tokens.

They also seem to be staying away from past blunders where you could go out and earn points by playing games. I was hoping they would give it another go just with a lot more testing beforehand. Make sure to use up all Festivity Tokens and the Winter Sale coupon before January 2nd when the sale ends. 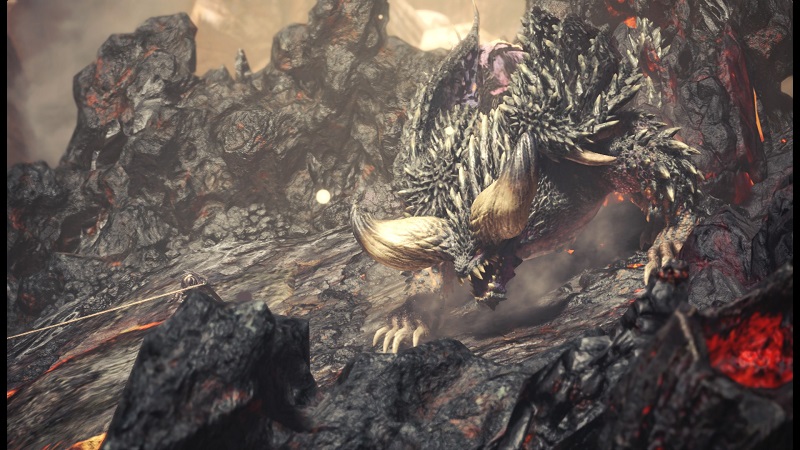 Monster Hunter World has a heavy focus around epic boss battles and using what you gather to gear up from crafting. It does have an expected quest cycle that plays really well into how the game is set up. You get to explore new areas, prepare for fights with making the right gear, eating food, and bringing the right supplies like position antidote. Along with fun fights, there are quite a few beautiful cutscenes throughout the main quest line and beyond. 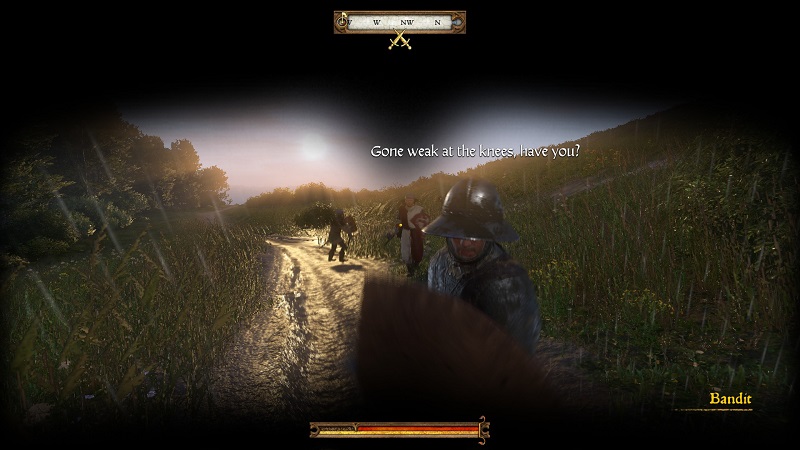 Kingdom Come Deliverance is set in the medieval era with a heavy focus on being story-driven. Right off the bat, the game binds you deeply with your character named Henry. Who spends the rest of the game seeing revenge for what transpired in the opening moments of the game.

Not everything in the game is as dark as the main storyline can be. I found myself in quite a few interesting moments from drinking with a priest to activates like bathhouses. There was even a fair bit of nighttime thievery. I don’t think they ever worked out who committed all those crimes! 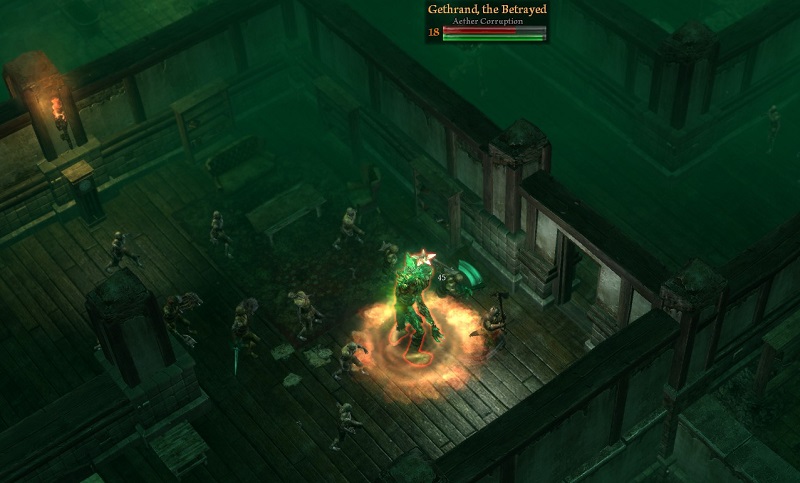 Grim Dawn has some classic hack and slash style feeling of gameplay with a lot more modern expectoration of a game. With it being in an apocalyptic setting the game also has a darker feeling to its world as you progress thought. The game has harder difficulty settings, a deep item, and a skill system, along with some interesting game mechanics like the one-shot chests you can discover. 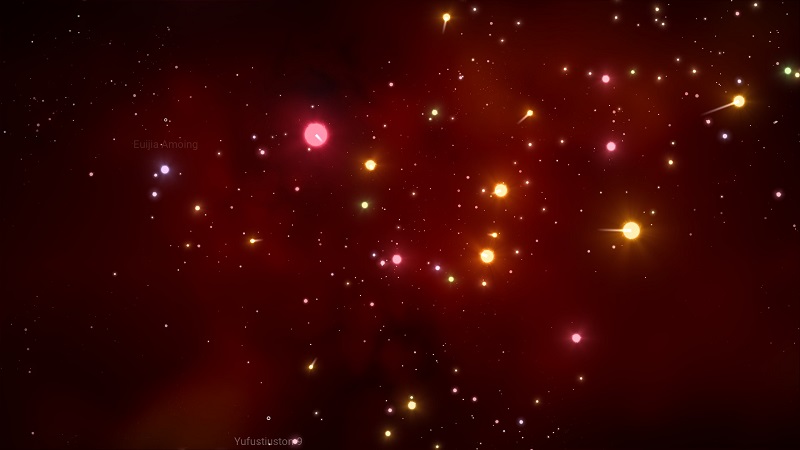 No Man’s Sky is one of those games I was super hyped for when it first came out for in 2016. I was then instantly not a fan of the game for it failing to deliver this insane galaxy that many where expecting. The good news here and why it’s made the list this year is they put a lot of time and effort into giving us the game many were hoping to have.

The game has a heavy focus around exploring the galaxy and gathering resources. With most of your time spent on planets checking out the different kinds of resources, creatures, and other inhabitance it might have. Along with some base building, upgrading ships, your suit, and a multitool. There is some combat but that is not the focus of this game. 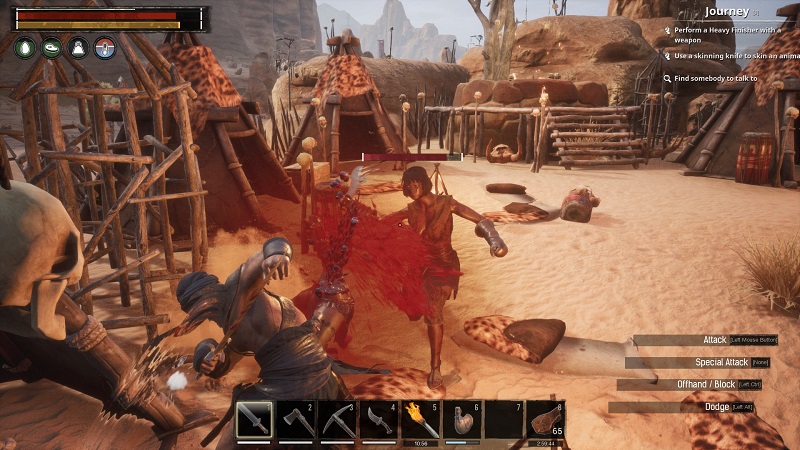 Conan Exiles has some interesting survival scenarios you end up dealing with from massive sand storms to having your base attacked by NPCs or even players if you are on a pvp server. You have extreme heat too cold to deal with that limits progression unless you have the right gear to survive those elements. Everything is player crafted from the buildings right down to the weapons you wield to clear out camps and dungeons.

The game can be played as a single-player or with a group of players on a dedicated private server. There are also a ton of mods to extended gameplay in the Steam workshop. From things like weight and durability to large scale conversions that really shake the game up. 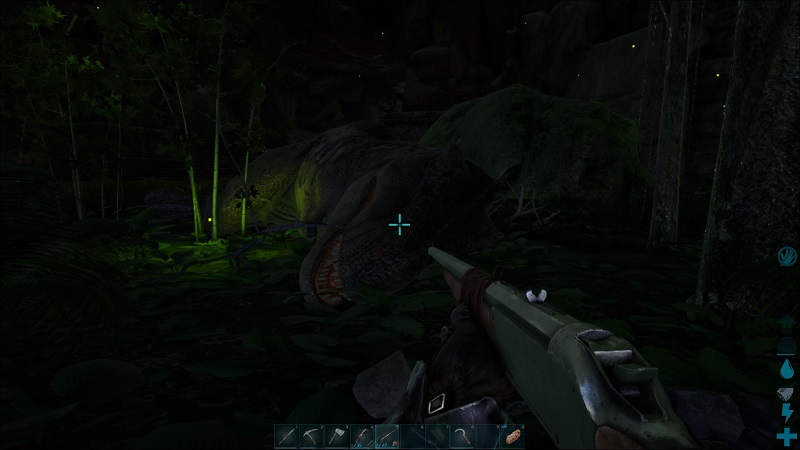 Ark Survival Evolved is all about hunting and taming dinosaurs. It’s a eat or be eaten world out there and if you are not having a Trex steak for dinner chances are you are on the menu. This game has so many dinosaurs and they are always adding new ones. From ones, you can tame to mine with to flyers to take control of the sky. Your base will feel more like a zoo once you are done taming everything you want.

In my more than 1k hours of in-game experience, I highly recommend playing on private servers over the public ones if you do want to play multiplayer. They tend to be more new player friendly and there are some really cool mods out there as well. Not to mention you don’t need to no-life the game as they tend to have higher rates and even some pvp rules to make the game more enjoyable. Unless you are the kind of person who enjoys pain and suffering than play on a public server. You have been warned! 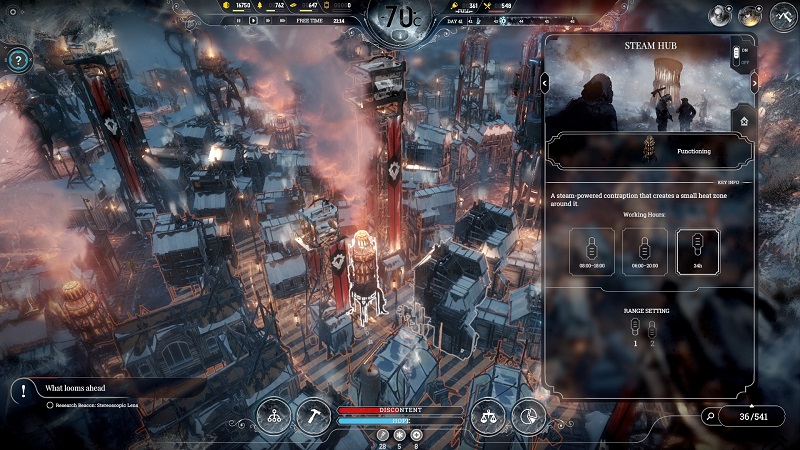 FrostPunk is a different kind of survival game where you are the leader of a community trying to survive the ever-decreasing tempters, political strife, and sabotage. Along the way, you have to make some very hard and even questionability ethical decisions for survival. As you attempt to move forward to building a bigger city with what resource that can be gathered. Some will never return back to base again after exploring what lies beyond. 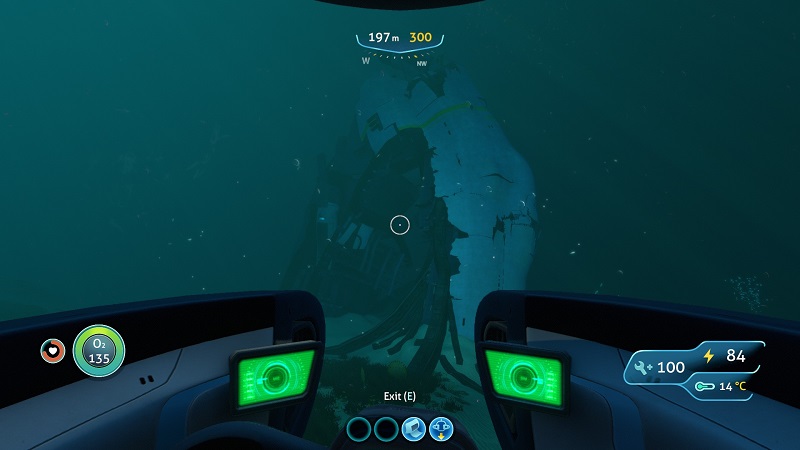 Subnautica is not for those that are faint of heart. While it is a survival game it takes place mostly in an underwater setting filled from peaceful to things that hunt you down in the dark depths of the sea that will keep you looking out of the corner of your eye. On top of that, you can create bases around the map, go exploring, and build vehicles to reach deeper and deeper depths. 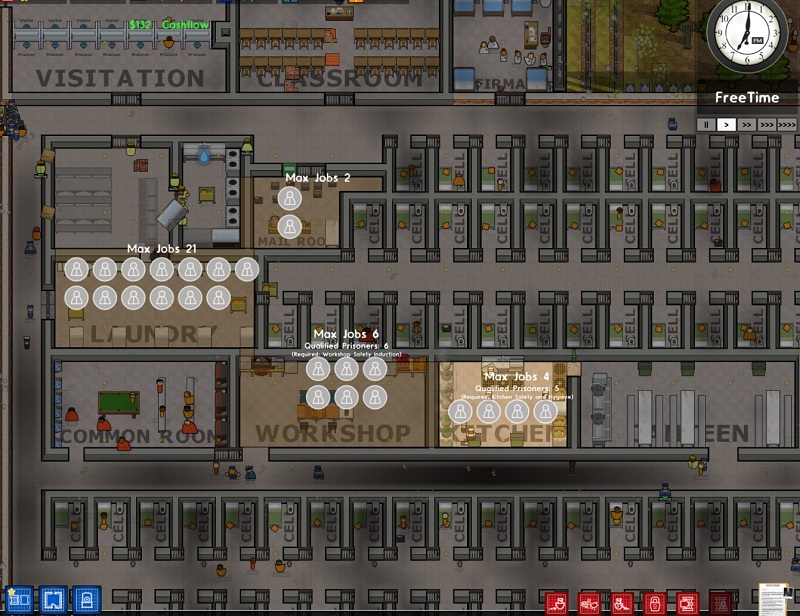 In Prison Architect you get to play the role of the warden and not only build your own prisons but control just about every aspect of the souls imprisoned within their walls as well. You will need to raise money from grants or prisoner intake among other ways to expand your operations.

Prisoners come with all kinds of backgrounds and some of them even with backstories. The only thing for certain is quite a few of them will be looking for ways to escape, drugs, and even weapons to seek revenge on the snitches inside. Will you be able to build the ultimate prison or will it burn down from countless uprising as you ignore the prisoner needs to cut costs? 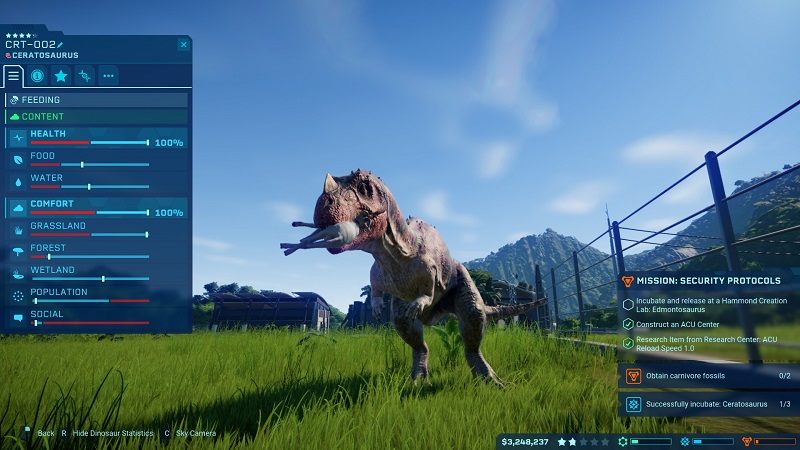 Jurassic World Evolution allows you to build dinosaur parks on islands that have different scenarios and challenges to overcome. Sometimes you are creating new strains of dinosaurs by playing with their DNA makeup bring in bigger crowds. Other times your park guests are on the menu as you lock down the entire island trying to regain control of your creations that have broken out.

Pricing displayed is based on the US store and may be different in your region. Links to the store pages may have issues loading due to high traffic on the Steam website.

No Money To Spend This Winter Sale?

The holidays can be tough and you don’t always have money to splurge on yourself. There is one game that has remained amazing over the years that I have managed to put in over 2,100 hours in. 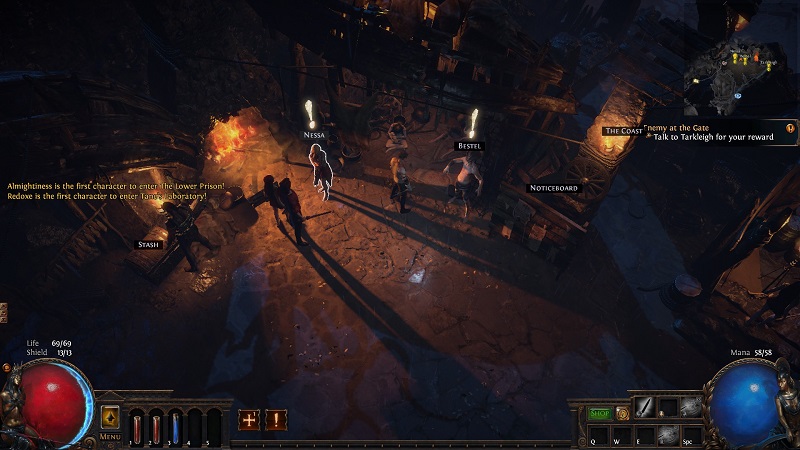 As far as free to play goes Path of Exile is hands down one of the best ARPG I have ever played. This game has continued to innovate by having new leagues every few months that change up the meta and bring brand new mechanics to the game.

In addition, they are building out Path of Exile 2 that will be coming in the future. The great thing is they will be merging the two as they move forward so now is a good time as any to jump onto the Path of Exile hype train.

Their microtransaction shop has cosmetics, stash tabs (bank space) and character slots for sale. You won’t find any pay to win in there. Just some really cool looking gear to not look like a noob! 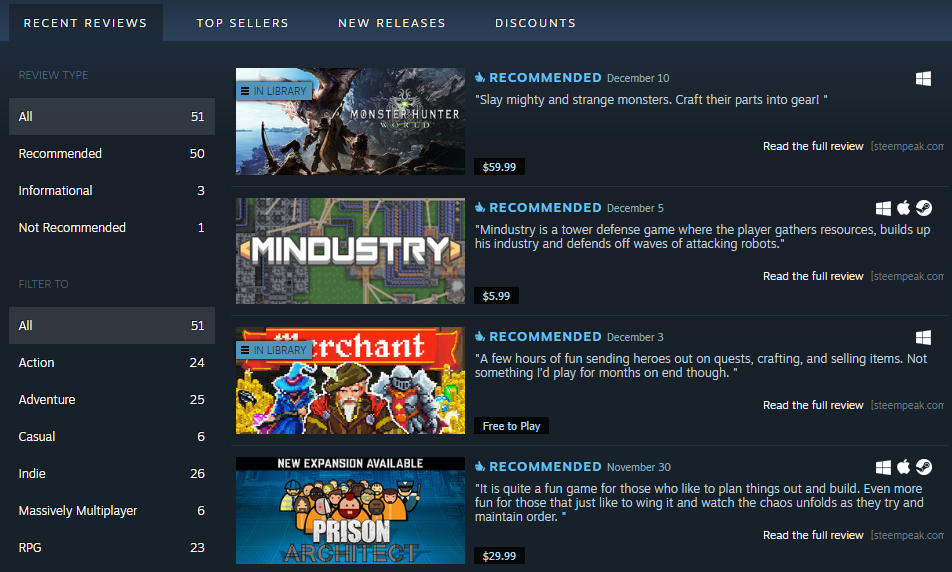 In 2019 I really went all out this year to get down as many reviews as I could while still maintain the depth of the review my readers have come to expect. As such to check out a full list of games I have a review on that are on the Steam gaming platform you can check out my Steam curator page. Consider giving it a follow for future game reviews it would also help out a lot.

For a full list of all games on sale, you can check out the discounts tab. From there I give a very brief thought about the game with a link out to my full review.

Happy holidays and have a very merry and warm Christmas. I hope some video games you want are on sale and you get to have some amazing times with friends gaming into the night.

Unless otherwise stated screenshots were taken and content was written by @Enjar about the Steam Winter Sales Event. The cover image is from the Steam Storefront page.