I got a bit of space madness in me. I’m itching for more crystals and fewer pirates and bugs. Hopefully, the bugs and pirates are not a result of the crystals. Oh, I guess you will find out about that part one day. 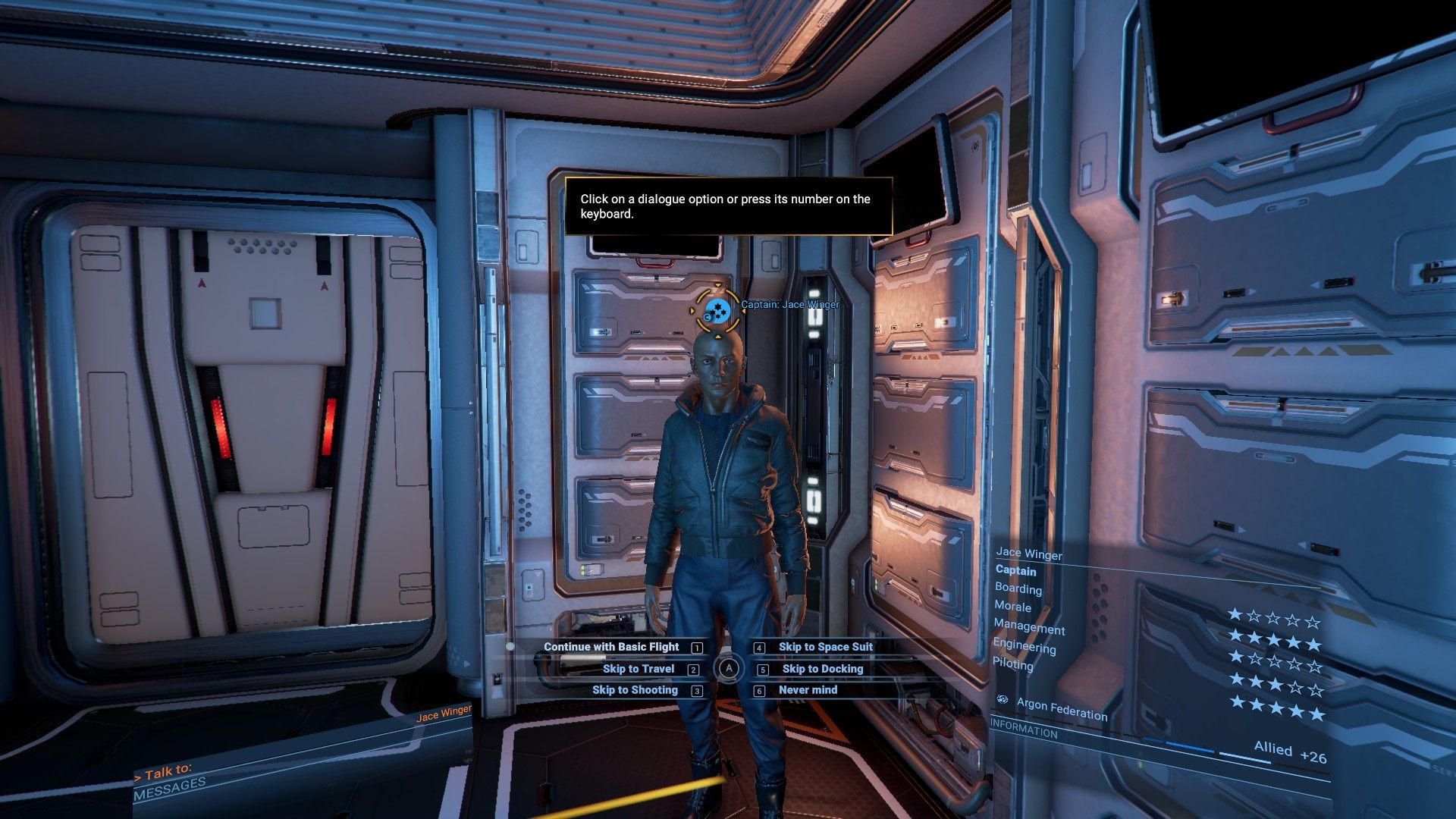 I said I would give the X4 Foundation tutorial another try. I even started it over fresh from the start. I ran into the same bug. The space suit did not stop like it was supposed to and manually doing it did not trigger the mission to move forward.

I restarted it over again and talked further with the training NPC. He allowed me to just skip over that part. As if they knew it was broken and that was the fix or something. Not a great sign. I decided to heck with it. I’m going to enjoy an Eggosoft game if it’s the last thing I do. All the rest of the games I’ve attempted to play from them I either hated or they were so buggy I gave up playing. I’m not going to let this game get off the hook that easy!

The first order of business in building an empire is making the first space credits. They say the first one to make is the hardest after that you are a space billionaire. Riding around in exotic ships laughing about space crystals as you slowly go insane.

The second order of business was to watch ships dock for way too long at a space station dreaming about having a nice ship. The ones I’ve seen are huge compared to my ship which is not even big in the grand scheme of things.

After a little while, I finally peeled my envies eyes off what others had in this game. It was time to take my rust buck out for a spin. They were not even using the good space tape to hold the thing together either. I swear a gun must have fallen off the thing from me crashing into the docking area trying to back up.

I decided I would explore around for a bit. The sector I was in did not seem that dangerous or large. There must be money to be out there somewhere in this universe. I just got to find what I’m good at. I’m still not thrilled about the controls for a spaceship. I hope at least I get used to it at some point. 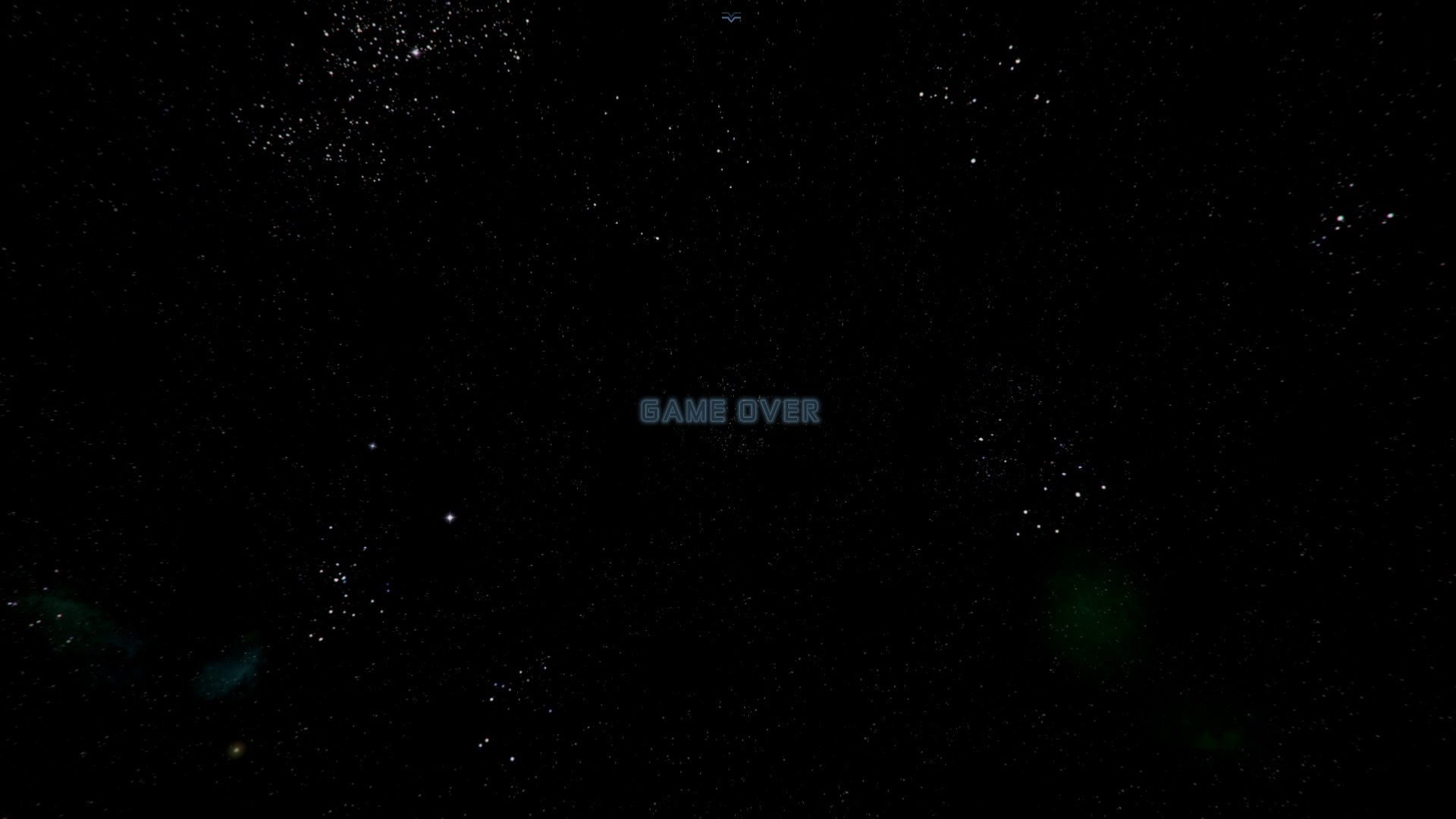 Turns out I do suck at flying a spaceship in this game. Also, I need to stay away from the pirates. The little tiny ship I start with did not exactly perform to my expectations of being an eccentric billionaire empire tycoon. It was a bit short-lived.

This time it was to do something a little more my style. After a little more exploring and staying away from the area where I had a slight misshape and the entire universe had to be restarted from the beginning. I ended up finding a space gate.

Clearly, death has near-zero consequences for me this early on. I went it. Half of me was terrified I’d find some giant death trap on the other side of the gate as if trying to go into low sec in Eve Online near Jita. The other half ways daydreaming again about striking it rich. It turns out I’m not entirely useless in this game after all or so I thought. I found myself in an asteroid belt! I started shooting at them hoping to discover the different kinds of material I could mind. Sadly, every time I popped a rock I was rewarded with not a darn thing. I guess I have the wrong tool for the job.

Still, I thought to myself I wanted to explore the asteroid belt for a little while. This thing is such a beauty it would even sparkly once in a while back at me. Wait a moment. Could that be an animally on one of the rocks? I decided to fly in without trying to max out my insurance rates the best I could. I only hit 4 asteroids and the duck! I have no clue what a duck is doing in this game. I sure hope space madness is not already kicking in (there was no duck.) 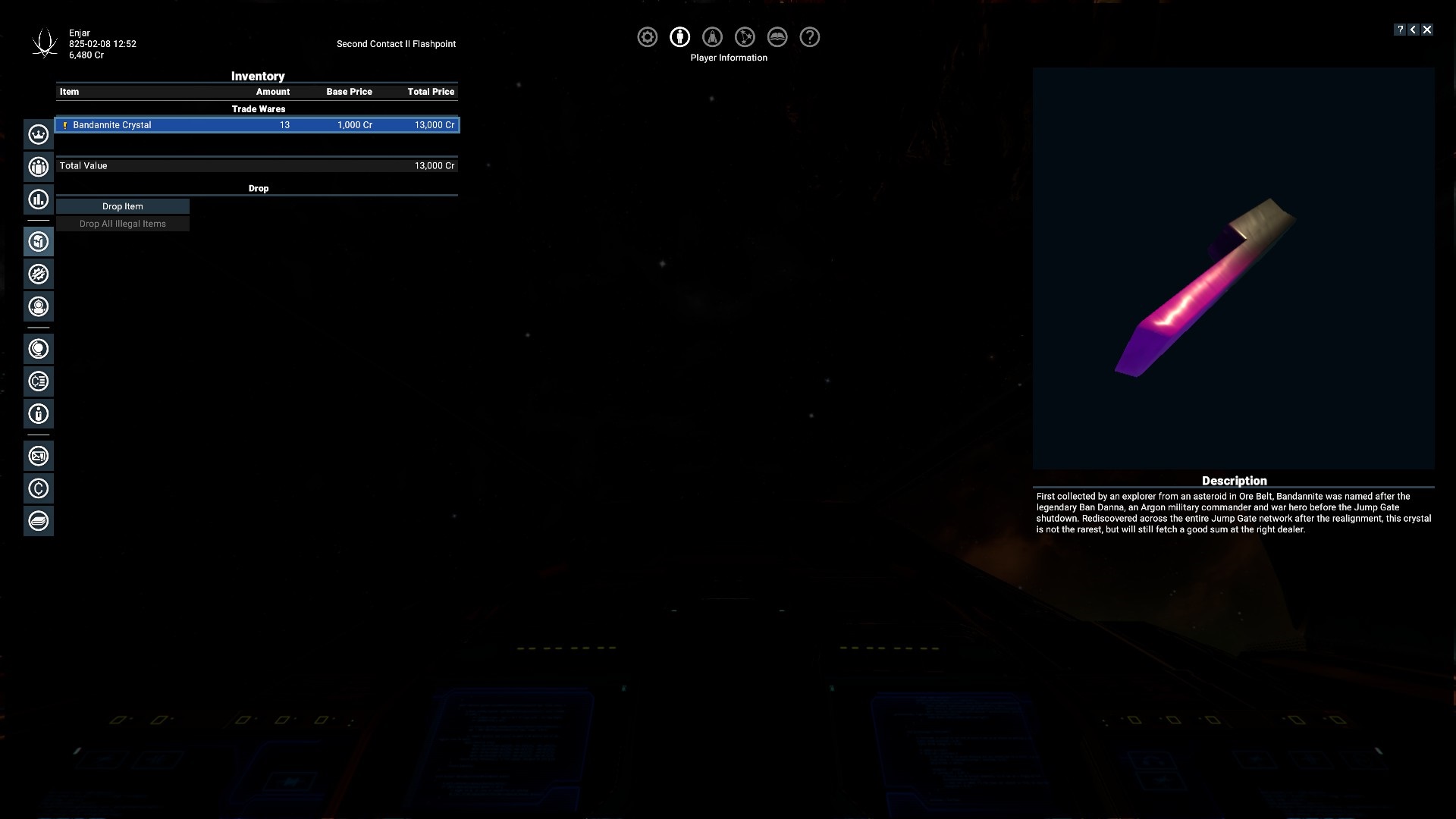 I took a little while of trying to line up my aim to shoot at the crystal formation I had found. Once it was all mined out I found myself the owner of some Bandannite Crystal worth around 13k space credits! That was not as hard as I was expecting after having so many mishaps up till this point. Perhaps this universe is worth saving after all.

I spent a decent amount of time flying around the asteroid belt waiting for it to blink back at me. Signaling a crystal was waiting to get blasted to bits. Thankfully there was not some kind of Collective For The Ethical Treatment of Space Crystals as I would be number one on their wanted posters. 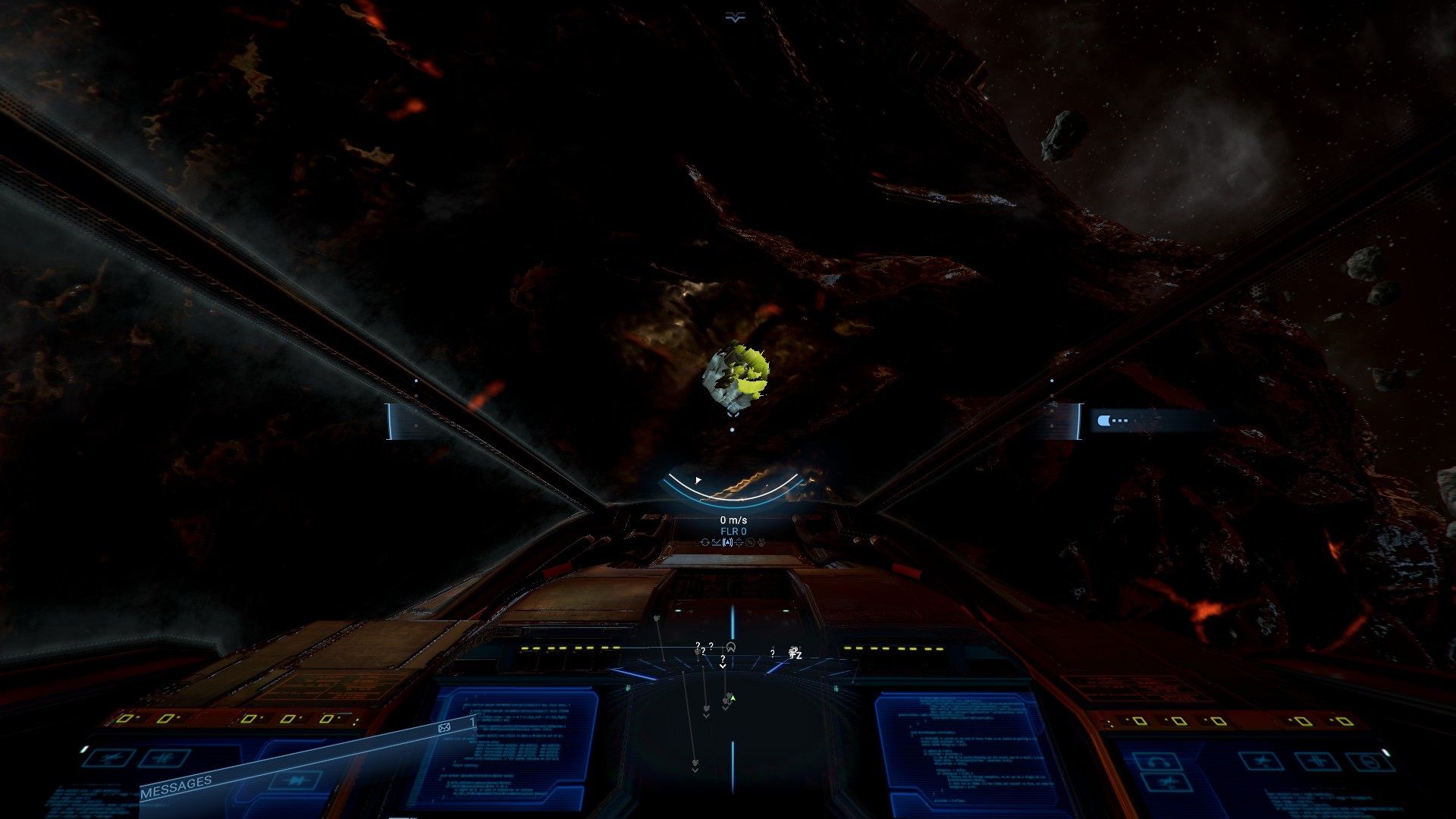 After a while, I developed a bad habit of the yellow stuff. OMFG, just ten units of the stuff go for 150k credits. Sadly I could not find any more of the stuff. Believe me, I searched high and even higher. I still have withdrawals to this day just thinking about finding another cluster of Aguilite Crystal.

Along the way, I did find some Unstable Crystal. The police have come by so many times to scan my cargo. I have a funny feeling this is the stuff they are after. I ended up jetting it into space. Naturally, I wrote down the location of where I was dumping them. Just. .. umm. . . in case such information one day come comes in handy. For environmental reasons! Yes, environmental reasons. . .

After a while I got a bit cornered with the amount of wealth I was carrying around with me. The last thing I would want is a pirate finding me and putting even more holes in this ship. As if I would notice. I headed back to a station and found a trader. All the space crystals I mined netted me a cool 305k credits. It's not going to take longer to become a millionaire in this game. Now I just got to work out what to do with such wealth. 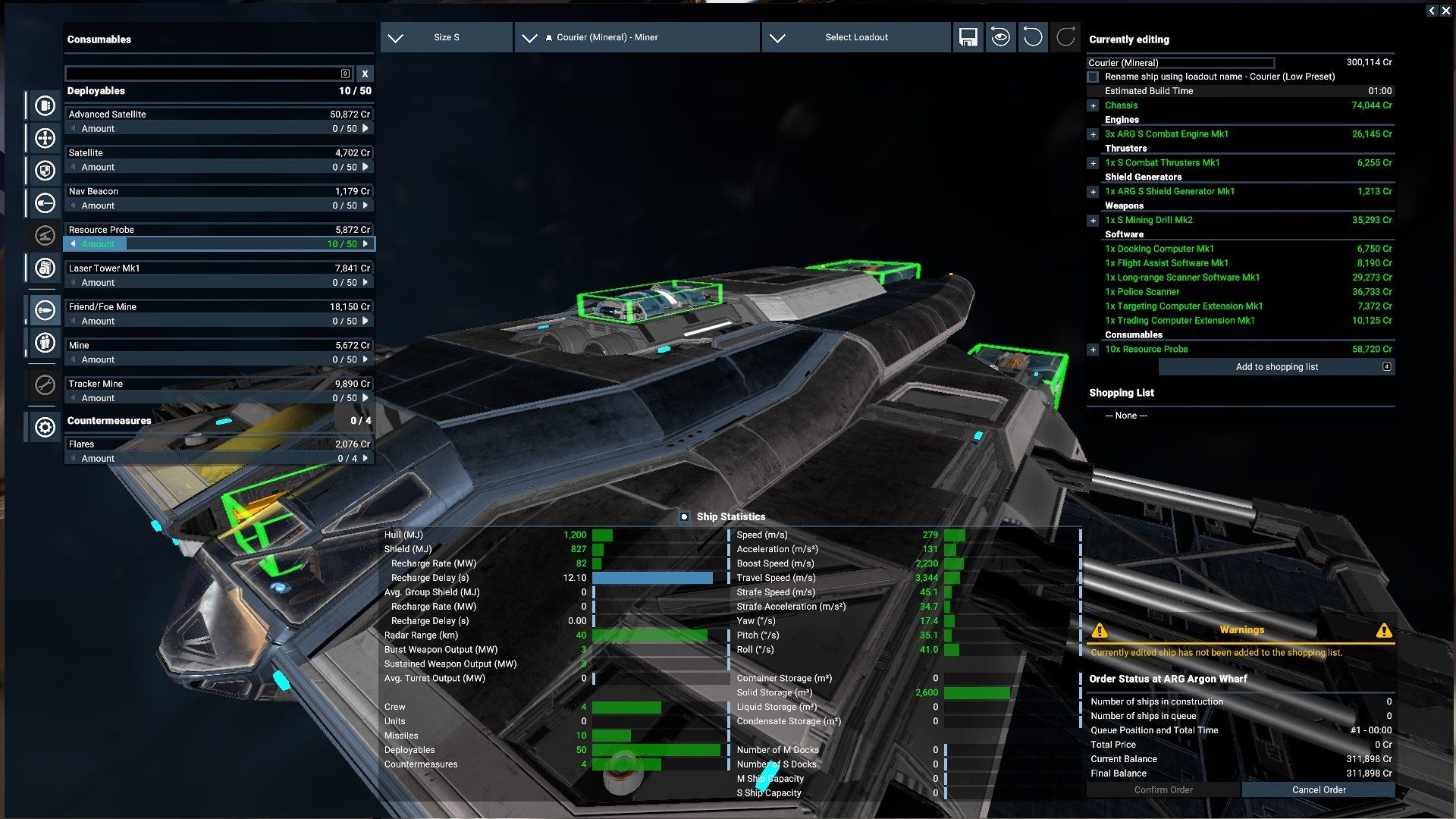 It turns out I had just enough to buy myself a mining ship. There was even enough left over to hire a pilot for it as well. Things are starting to look up now. I already have myself a crew!

This also meant I was poor again. It was however enough space excitement for me for the day. I tried to find where the captain can get some shut-eye in this universe. I guess I’ll just sleep in the cockpit of my ship. Hope a gas line does not spring a leak while I’m sleeping and I get gassed to death. The space station insurer would cover that kind of death right? 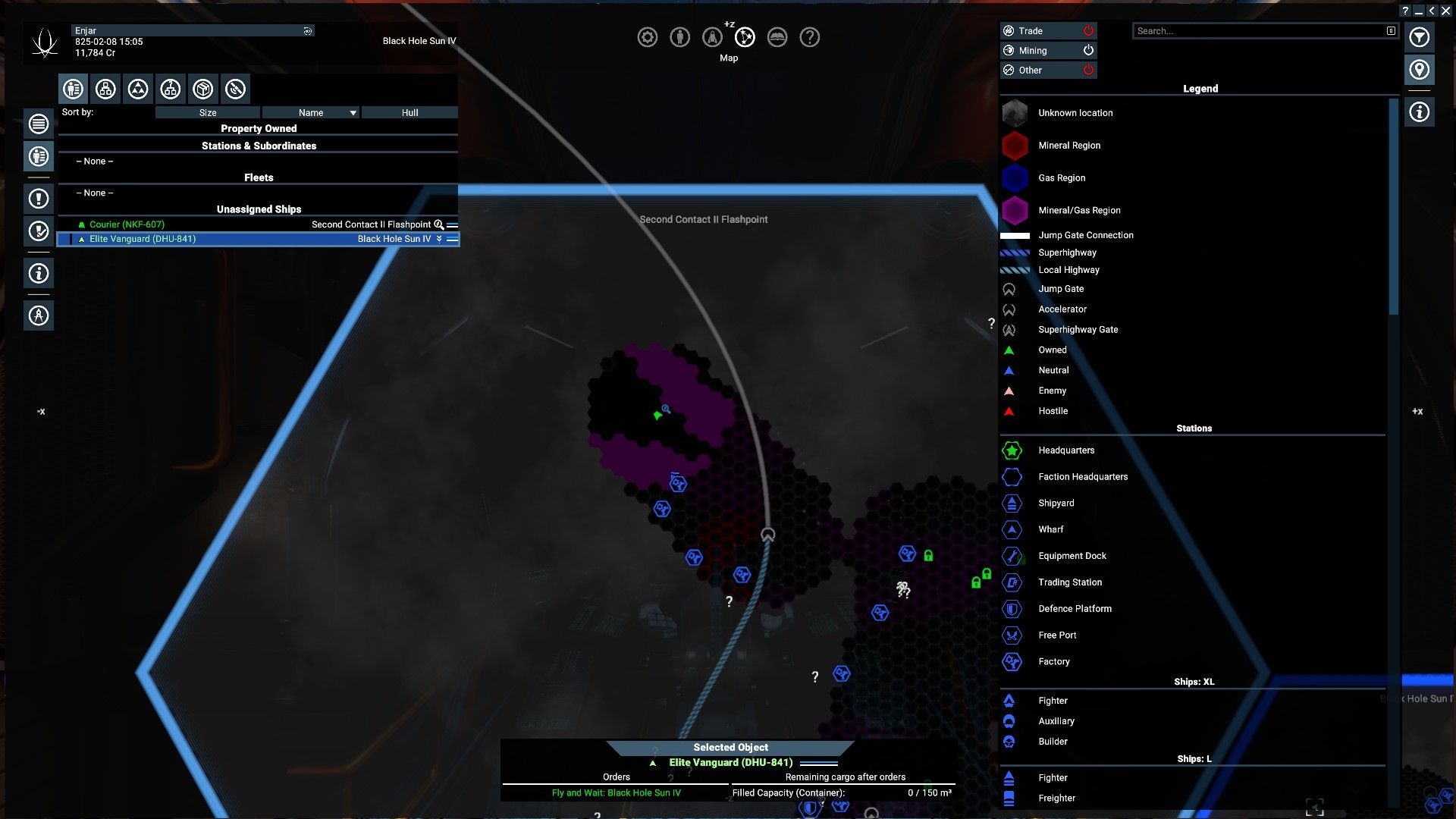 While a little bit of a rough start it was a lot better than that time I gave the tutorial in this game a try. It seems like I might finally get to experience what one of these games is all about. This space adventure in X4 Foundation will continue as now I am quite intrigued by what this game has to offer.