It has been a few months since I’ve done much with my Dcity. I just let it sit there earning some SIM but it was not much to write home about. Meanwhile, the game has been trucking along nicely and I felt it was time to invest a bit more into the game.

With this game not being one I need to log into often. It’s easy to make some adjustments to it and let it sit there with little to no time on my end needed. Since I’m looking more at the long term growth and making small adjustments here or there I ended up going with a bankroll of around 120 Hive worth of spent mostly in SIM.

I feel for games like this it’s important to set some goals. They had added several features I was just not taking advantage of such as research. My city was sitting with no additional room for people to work. So clearly there was some room for improvement if I’m going to leave it alone for a while.

To see where I could get the best bang for my Hive I compared buying cards off the player market and from the developers by buying random cards. Since we have two different currencies to work with Hive and SIM it’s always good to check prices and see which one is the better deal.

I also took a look at the value of cards in general. Did I think I would be worth gambling with buying a random card for 800 SIM or 4 Hive or just buying them off the market? I started with taking the gamble than filling in some of the spaces as I went along. 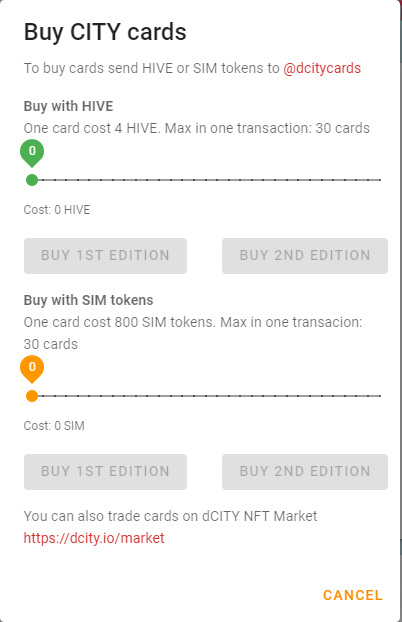 After comparing Hive vs SIM it was clear at the time buying with SIM a random card was better. This however did not always apply when checking out the player market for a specific card. This also included keeping in mind the 1% deposit fee into Hive-Engine for SIM and the fact the market might fluctuate a small amount while I’m buying as I go along. 120 Hive worth is not enough to move the markets a lot so I was not overly concerned about seeing a large price swing.

There are two different kinds of single packs to buy from Dcity. This is the first edition and the second edition which to get a better understanding of the two it’s best to just look up the information page the game has on them. I mostly went back and forth between buying the two different types as I was fine getting the majority of things out of either.

Towards the end, I was buying the first edition in hoping of landing apartments for the 20 populations which costs a fair more than most cards. I had more than enough buildings that needed workers at that point. I didn’t luck out on getting any. So I ended up buying a couple from the player market as they are the more cost efferent way of imminently gain populations.

While I did add 100 population to my Dicty during my buying spree in the end. I was still short around 75 or so which reduced to 62 employees to get everything up and running after a weeks’ worth of time. While it’s not an ideal situation I feel I have left some opportunity for things to grow on their own while I’m away.

I did luck out and loot a Job Center card which should help with my growing population of immigrants and homeless over time. While they do fill jobs they also have a negative impact on popularity which over the short term I’m not concerned with.

The best card I ended up getting while I was opening random cards was a Military Industrial Complex. People are trying to sell these for around 29 Hive and higher which helped ensure the amount I was spending on random cards was worthwhile.

This also gave me a better understanding of a card I did not have before now. The Military-Industrial Complex brings in a little bit of income each day at the cost of some popularity. This is a fine tradeoff for me after running some numbers and it seemed like a decent trade-off at least for now.

Another thing I wanted my Dcity to have was a chance at acquiring technologies. For this, I ended up buying some research centers for both the education required and owning at least one. They were also the cheaper option to go in terms of buying per education point at the time.

Trying to gain technologies can be a bit of a pricy venture to go on. You need 40 education points per 1% chance per day and it caps at 25%. You also need to unlock anything you want to have a chance at getting for a drop. Needless to say after getting just 1% I felt for the budget I had given myself that was going be it for now.

I did luck out and get my first technology. That however was not from the 1% chance I have in-game. I ended up getting gifted a Free Internet Connection on Twitter. This grants a 5% boost to education. I’m not expecting to see another technology for my Dcity for quite some time unless I buy one from the player market.

In the end, I got more in card value than what I was spending in SIM to open random cards. My city overall is still ahead if the estimated value it shows is correct and I’m able to get anywhere near those prices. Which for myself I usually try to consider a 20-30% haircut in prices if you have a sudden need to sell off everything and are not going to do so over many months or longer.

My city also moved up quite a bit in the ranking. Today I’m sitting at rank 403 which just puts me out of the top 400 to share a portion of rewards the game pays out. I was sitting a bit higher last week when I made these purchases collecting around .11 Hive each day for a week.

Screenshots were taken and content was written by @Enjar. Screenshots are from the game Dcity.