Waxtycoon is an idle tycoon clicker game on the Wax blockchain. The player can unlock different idle business such as a cafe and upgrade the income or timer of the business. With this being a Wax game there was an attempt at play to earn though rewarding the highest level players for resting progress and starting over.

As far as idle clickers go this one is quite basic. So basic it feels right off the bat rather unfinished. In a typical idle clicker when you hit the wall and you did not mess up too badly you get some kind of advantage for resetting. In Waxtycoon you get nothing unless you are resetting as one of the top 20 players.

The unfished feeling comes from the fact that only the cafe has a bonus once you hit level 250 on it that you get ten times the production. As far as I can tell unless I am missing something there is no upgrading milestone at least at the state of the game I’m able to get to other than for the cafe.

Once the cafe gets to level 250 it also demolishes in terms of earning revue the building after it a burger joint. Not to mention the cafe is so much cheaper I was with easy able to reduce its timer down to just .21 secs. Upgrading the timer any further now shows my next upgrade will take off 0.00 seconds.

The difference between the cafe and the burger joint is not the only business in this idle clicker that feels a bit off. Serval times on other business I get to a point where I might just step over upgrading a business and choosing something higher or lower as from my math it just seems like a better buy. I only go back to fill in later once everything else is at such a higher upgrade cost.

The most different thing about this game is being able to upgrade the timer. Not upgrading the timer and hoping for the best seems to lead you quickly hitting a typical wall you would see in an idle clicker where you would be stuck for many weeks before you could unlock a new business. To showcase this matter I reset this game once. My first time around I put some investments into upgrading the timer but I mostly focused on upgrading production. Which turned out to be quite the mistake. 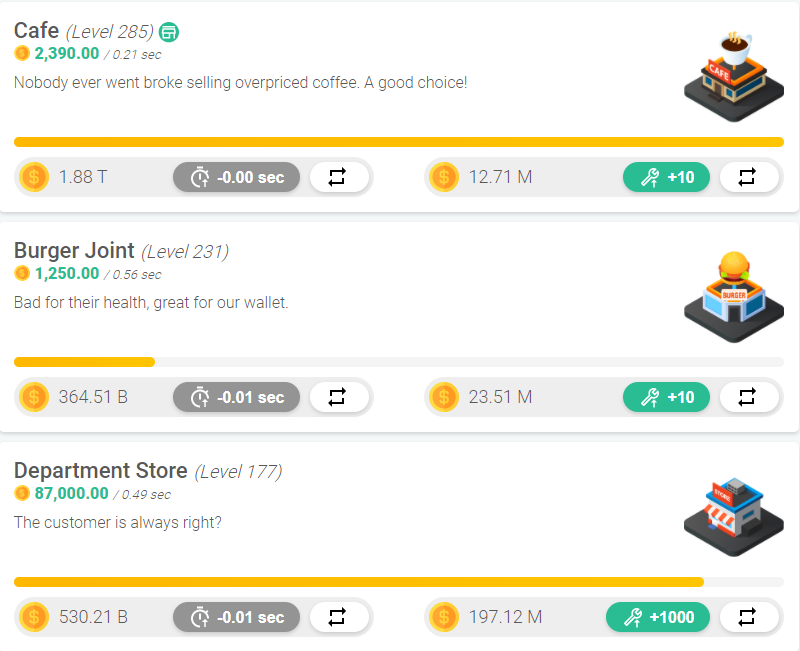 The second time around I waited around a lot longer so I could upgrade the timer at a much cheaper cost. Just comparing my two different playthroughs I was able to with a much lower cost and building-level out-earn building vs building in my second attempt without much time played.

While many of those businesses are still earning less per cycle they have much faster business cycles at a much cheaper price point. You can also see just how pointless it would be to upgrade the burger joint. Not only is it slower since I was unwilling to wait days to keep upgrading only the speed. It’s not getting a ten times production at 250 either.

This game can also lag out sometimes since you are focused on upgrading the timers. Lag in these kinds of idle clickers is always something that should be thought about and planned to avoid introducing for the player.

With how fast this game is having to update tick to calculate everything. Add into the mix when other players upgrade it starts spamming on the side of the screen showing their upgrades. I’d hate to think what this game is like with all business unlock and .20 sec cycles each.

In a lot more modern-day idle clickers they give the player a whole host of things to upgrade and invest the currency of the game into. At the time of writing this that is not a thing at all. There is nothing else to do unless you want to buy cash shop upgrades with diamonds from other players.

Diamonds are this games play to earn mechanic. If you somehow make it into the top 20 players you get an unknown amount of diamonds for resetting. Those diamonds then can be spent buying upgrades in the shop for a small production increase that stays with you after every reset. The diamonds can also be sold on some exchange I never heard that also has my region blocked. 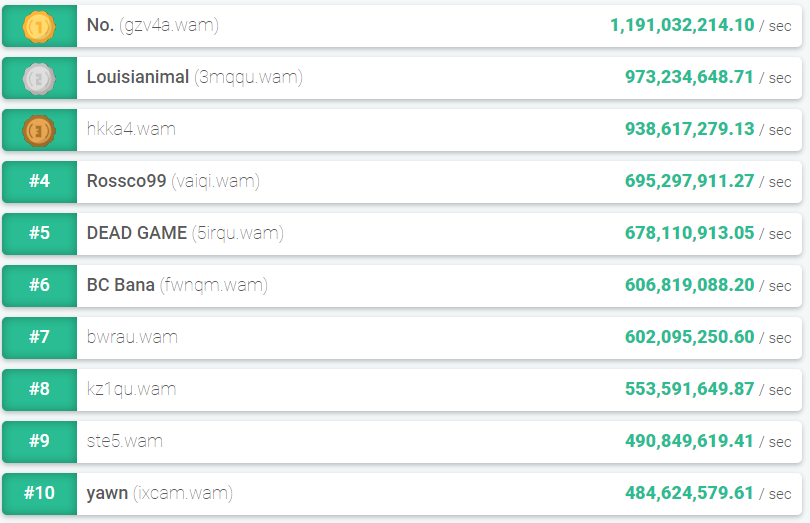 While it would be cool to think if you at least played this game off and on again for months maybe you could get into the top 20 for something when the bigger players reset. The issue is most of those players appear to have stopped playing or are trolling the game by refusing to reset. Which some of their names seem to suggest.

As a result, I have no idea how many even in the top 20 will ever reset allowing someone else a chance one day to get a single diamond from just playing. They're also not a lot of info on this game out there so I don’t know if you only get 1 diamond for being 20th or if it’s even enough to buy one of the lower upgrades out of the shop.

While you could buy the upgrades out of the shop with Wax as it appears to “buy” diamonds on your behave. This is at least a good thing as I’m not welcome on whatever exchange they are even listed on. I don’t see spending a lot of money on this game having any kind of return. The early adopters to this game can just sit there and block everyone else. Perhaps a patch will come one day and they will be inactive and get surpassed by active players.

One nice thing to see that is also a curse with this being a blockchain game is every single business upgrade is broadcasted to the Wax blockchain. You can’t sell these upgrades so there is no value there. This game will however eat up all your CPU and RAM for the day for your wallet if you have not staked on Wax. Thankfully only 6 Wax staked mostly to the CPU should be enough to play this game without any issues. 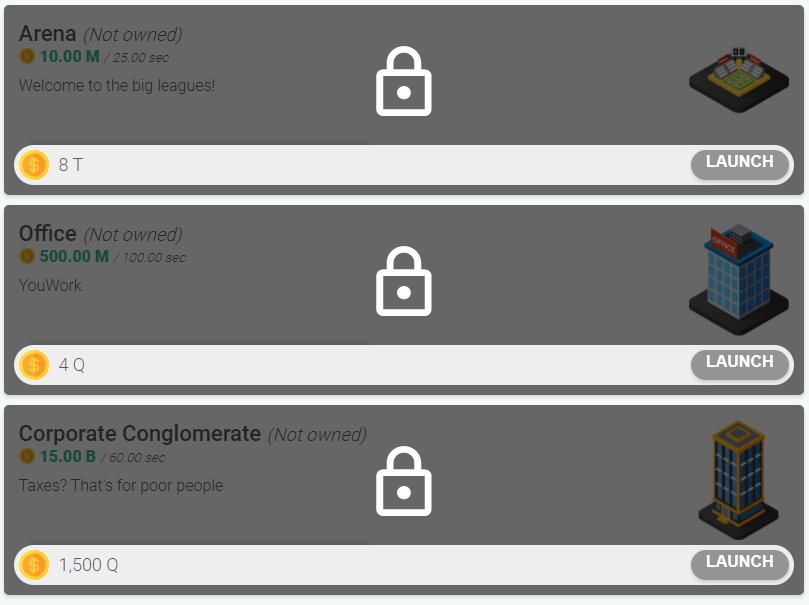 While I hope there is some kind of massive patch coming to this game one day I’m not quite sure if that will be a thing. As of right now, it’s quite barebones and frankly boring with little chance for a newer player to ever get into the top 20 unless they spent a lot over many months. Even then it’s still quite questionable.

It was at least nice to see an idle clicker on a blockchain. Not all blockchains could even handle the kinds of traffic these kinds of games can generate. At least with Wax, you are just using CPU and ram. Any other blockchain that has a gas fee would bankrupt a whale after thousands of upgrades one a time.

Screenshots were taken and content was written by @Enjar. Screenshots are from Waxtycoon.