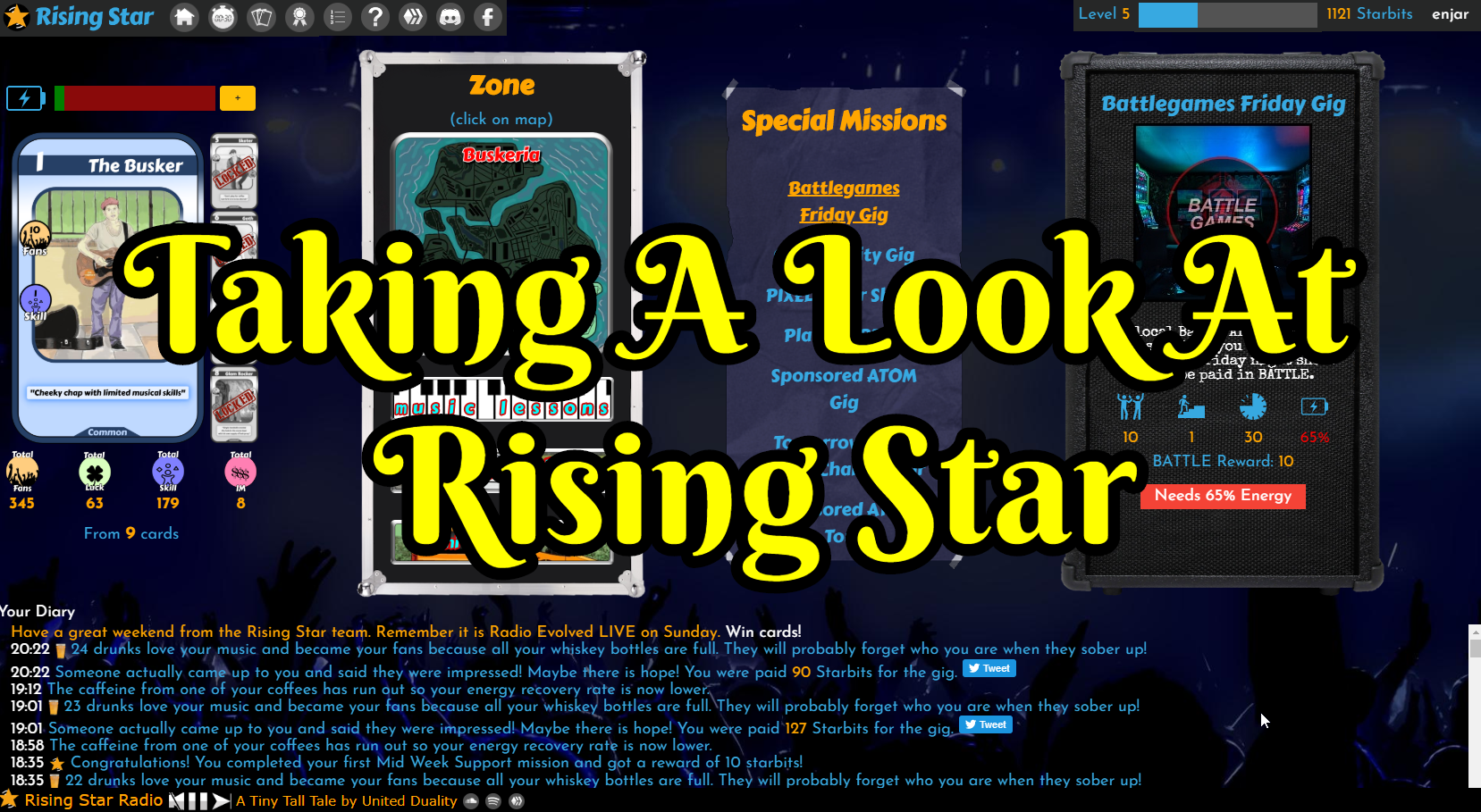 Rising Star is a browser and mobile game played on the Hive blockchain that is focused around running missions as a musician looking to rise in the ranks of stardom. You start as a lone musician without much talent getting chased off by the police just trying to earn some Starbits and fans. Along the way, you can acquire better musicians in your band and instruments among other things by buying packs of cards, getting random drops, and leveling up your music career to take on more challenging gigs.

The gameplay itself is focused around an energy system and timers from the gig you select. You first start off performing Illegal Buskings where the police show up to bust up the show and you run off earning whatever amount of the game's currency called Starbits that you could.

Higher-level missions have longer timers and consume a great amount of energy. They are also locked behind needing a bigger fane base and being high enough level to take them on. I’m rather a fan of increasing energy costs with a longer timer as you don’t need to be as active to spend all your energy.

Energy itself can be regained in a few different ways. Over time naturally, it increases by 1% every 5 minutes. After a mission completes you also have a chance of acquiring some coffee that increases the regeneration rate for a short time. If you are super lucky you loot some pizza that gives you a full energy bar on use.

The game uses Hive-Engine and cards which you can see throughout the game. An example is the above for mentioned pizza that restores your energy bar. You could have acquired a pizza box that allows you to save that pizza for later when you want to use it. Without the pizza box, you automatically consume the pizza and don’t always get the best result as you could have been near full energy. Coffee as well as its coffee cup card.

It is nice to see how they incorporated such cards into their gameplay that adds value for those who get one out of the booster pack. You can even buy or sell cards on the in-game market. With a single booster pack costing 5 Hive or 10k Starbits, there are quite a few cards people are listing that are at break-even or higher than the boost pack. There are a lot of other kinds of card types as well. Some of them are musicians that come with their fans, high levels of skill, luck, and even increase the income you can gather. You can also collect a wide range of different instruments that increase your luck from drums to a guitar.

Some of the cards are also required to take on higher-level missions. For instance, you might need some kind of vehicle to be able to go on country tours. This from a logical sense fits in well with the game. While other requirements might just be a guitar for that type of mission. 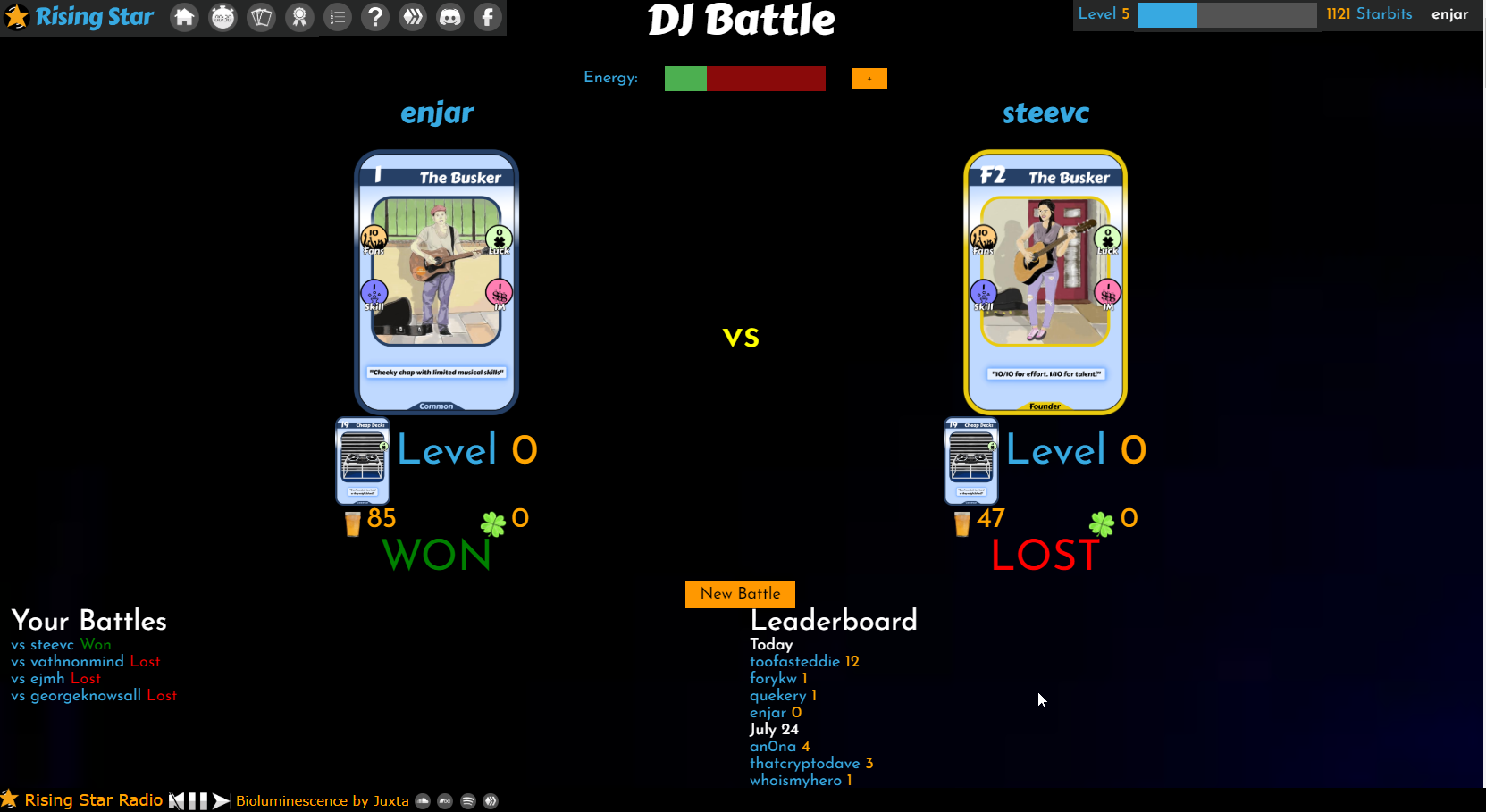 Beyond the standard mission type, they also have other kinds as well. You can do mini-games which they are still working on one of them. Earn other Hive Engine tokens. Send your musician to get some music lessons. All of these missions still cost energy to perform so that is something to keep in mind. Not all of them reward anything as of yet.

One of the things you can partake in is the Battle of the Bands. Where you can battle against other players at the cost of 5% energy. At the time of writing this, there does not appear to be any rewards for doing so other than having some fun. This looks like something they are looking to improve on in the future.

Out of all of these the most ingesting one found was being able to earn other Hive-Engine tokens from special missions. While they are quite high in energy cost and have a minimum withdrawal requirement you could earn a small amount of beer, battle, gift, atom, and some other tokens as well. Cross promoting other tokens within the Hive ecosystem using a game is just a neat idea and I’d love to see more of it in other games.

Since this game is focused around the music they do have Rising Star Radio that is playing in the background as you play the game. The music will even change sometimes based on what you are doing. This I found to be a cool detail for them to have.

I noticed a couple of times when sending my musician off on the first mission Illegal Buskings he would start playing about dealing with nerves of his performing at the show. In later missions, this changed into the musician playing songs with more confidence at a higher skill level. 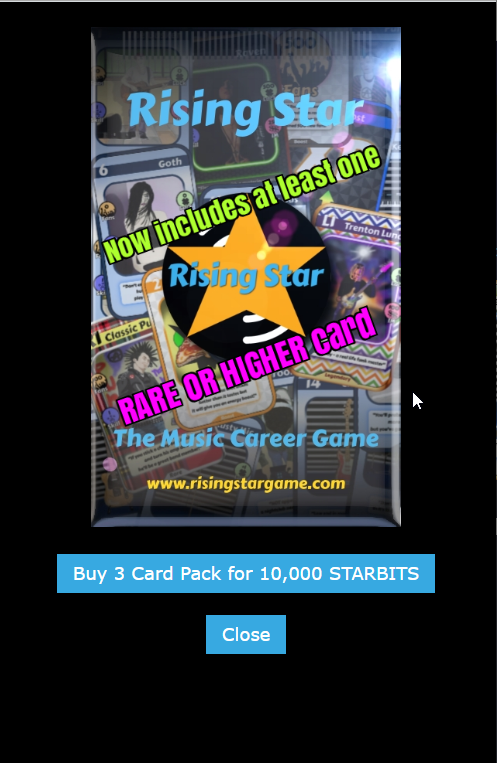 The fastest way of progressing in this game is just buying card packs for 5 Hive or 10k Starbits. The game does have some random rewards from meeting certain mission milestone for packs. Along with the ability to earn starbits for doing missions that could be used to buy packs. Spending a little bit of Hive can go a long way.

I opened up three packs and my biggest bottleneck now for progressions is simply acquiring experience and leveling up to meet the requirements to take on harder gigs.

Here are some Screenshots from what I got to give you a general idea of what the card opening experience is like. As I know some people just enjoy that part of playing these kinds of games.

Landed a rare card that was the cowbell in this pull. There are a couple of other players trying to sell the rare card for 8.5 to 9.5 Hive.

The rare musician in this pulls one other player is trying to sell it for around 10 Hive. The big hit though seems to be the fan boost of 50. People are asking for as low as 12 Hive up into the 40 Hive.

Depending on the price it might be cheaper to buy Starbits instead of buying with Hive. I did notice a slight discount when I bought some Starbits instead. You will just have to keep an eye on the market. It is nice to see there are a couple of different things you can do in this game. You can also play it for free all you need is a hive account and keychain to play. It was refreshing to see how music was incorporated into the overall theme of this game.

Screenshots were taken and content was written by @Enjar. Screenshots are from the game Rising Star (referral).