It has been quite a long time since I’ve played a RollerCoaster Tycoon title. This is a bit of an older game from 2004 that has been remastered and hence the complete edition in its name.

I had quite some classic fun that I use to enjoy in RollerCoaster Tycoon. Some of this included building a theme park full of attractions and generating profit. I spent most of my time in career mode unlocking new rides from completing objects set before me. Things started easy and over time got a little harder but nothing I could not handle. It was quite a relaxing experience. With 18 scenarios in career mode, there is quite a lot to do. Each one has its different theme that tends to align with the three levels of objectives you end up facing. Each of these scenarios is unique in the attention to detail that ties them into the overall feeling for the park you are building.

After my first couple of scenarios, it hit me just how much time the game developer must have put into designing each park. They didn’t just make some landscaping backdrops to put in for say the Fright Night scenario to make it look spooky. All the classic and what I suppose some new attractions had been reskinned to fit the overall aesthetics as well. A great example of this is the classic top spinner ride. Where your park guests get into their seats and then it spins. For Fright Night it was turned into a giant spider with a web underneath. Quite haunting if you ask me! You can even see in the background of the screenshot how the street lamps were given a scarier look to them.

I’ve always found it’s the little touches like that that can take a game to the next level. It also helps give each scenario a refreshing new feeling even if it is mostly the same old same old after you have complete a dozen of them.

Some of the overall themes well encompassed the map as well. I found a couple where so bold that I was somewhat tempted to just delete them to give myself enough room to build the standard set of rides and other things I would first put down to generate some income. That however felt a bit like cheating. Sometimes the game as well would not let you modified certain elements either like water the water in Go With The Flow. This forced you to deal with water being in the way; along with, not being able to add any more water for the bigger rides when you needed it. Making your plan out carefully how you incorporate the amount of water real-estate you had.

As far as the overall objects went in career mode a lot of them did feel a bit generic once you had finished a few scenarios. With there being 18 of them in total that is expected to happen. Keeping a certain level of park happiness or generating a certain amount of money in a given month is something to be expected from RollerCoaster Tycoon in general.

You have three levels of these objects to compete per scenario. They usually followed a pattern that you could guess without even knowing what would be up next. If they were looking for a certain rating for the easy one you would expect the next level up to just be a higher number. 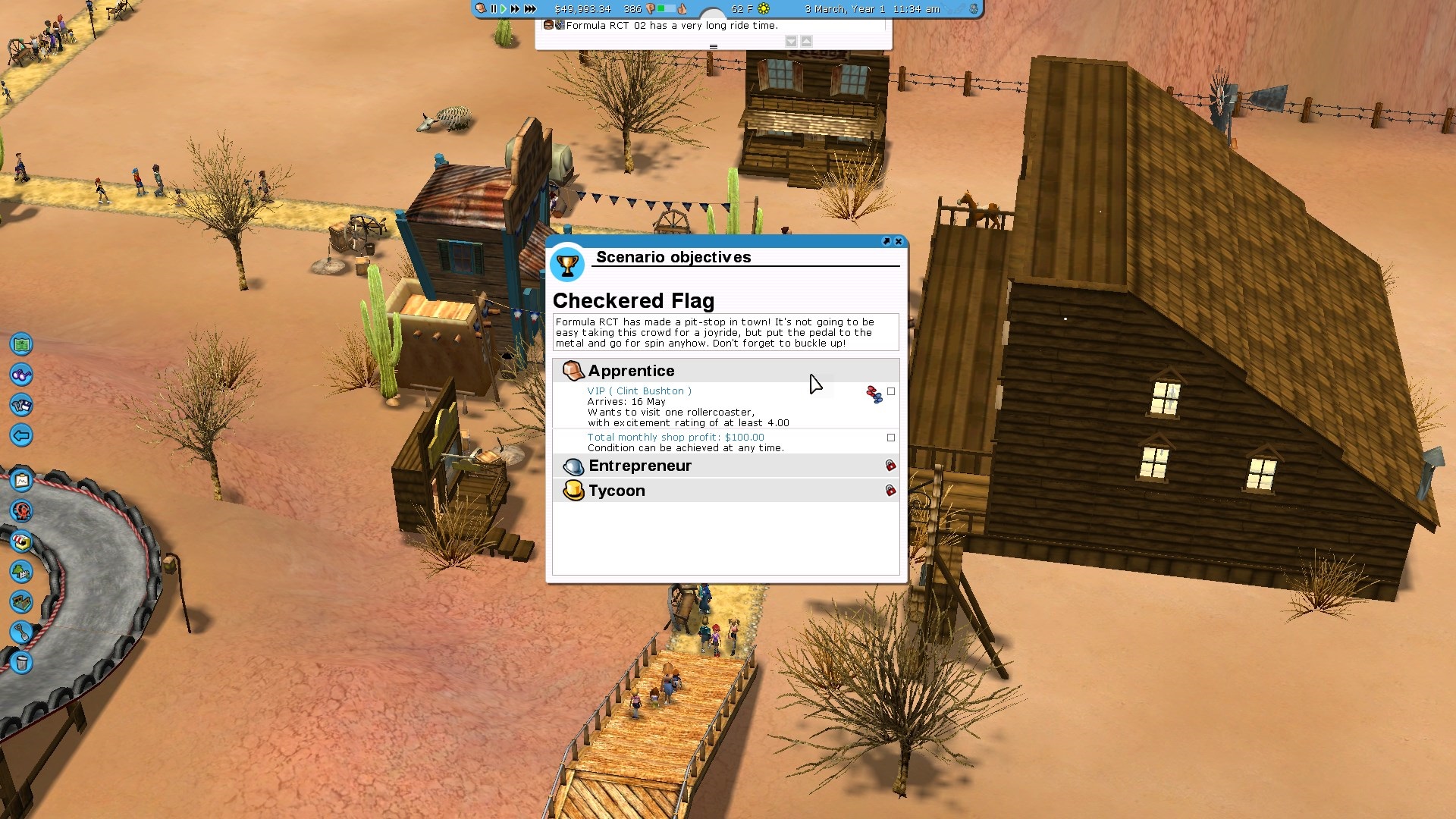 What was interesting though about the objective system was dealing with the VIP. While I didn’t have any of my plans spoiled as the VIP seemed to stay for quite some time if you were struggling. These were events where an important visitor would show up to your park on a given date.

I also found the VIP to sometimes toss a wrench in what my overall game plan was before I got into the park and got myself set up. Sometimes you would only have a couple of months to say build a rollercoaster that the VIP wanted to ride.

The VIP objectives would also toss some risk of failure in the mix. They might tell you the person has a lower tolerance to rides breaking down. Naturally despite having a bunch of mechanics on hand and lowering how frequent t rides where inspected I had one he was heading to break down.

I ended up franticly hiring a new mechanic and tossing him down right at the ride. The VIP was wondering though the park making comments about this or that which for the most part seemed like nonsense. Then he got to the ride and boom it was fixed just in time. I’m not quite sure what would have happened if it was not fixed in time. It however did put me on the edge of my seat a bit.

You also had exploitable moments for quite a few of these theme parks if you could find them. I would often find a certain item in a shop or even a ride that I could crank up the price on. Sometimes the game was kind enough to have the guest complain that an item was too cheap or a great deal. You would think after raising prices by 600% I would have had a mutiny on my hands. On the right item, they still line up to spend every cent they had with a massive profit margin for yourself to pocket.

Overall as someone not looking to play in sandbox mode which the game dose has for those who just want to do whatever you like. I rather enjoyed dealing with the theme park experience career mode had to offer. It made me use rides I usually don’t and even forced me to learn about different more in-depth to conquer the objectives. With RollerCoaster Tycoon 3 Complete Edition being a management simulation game there are quite a lot of other elements to this game. If you have played any of these before you should know what to expect. So I’ll only go over a couple of them. At this complete edition seems to be more geared towards that crowd looking for some good old time feels.

You have several different staff you can hire. Some examples of them are janitors to clean up the park, mechanics to fix rides, and even animal keepers that I never used. While you could go overboard and have an army of stuff they can hurt your bottom line so finding balance is always important. You can also train them so they perform their jobs better and are less likely to leave. This I found worth spending instead of hiring more and having some quite on you. 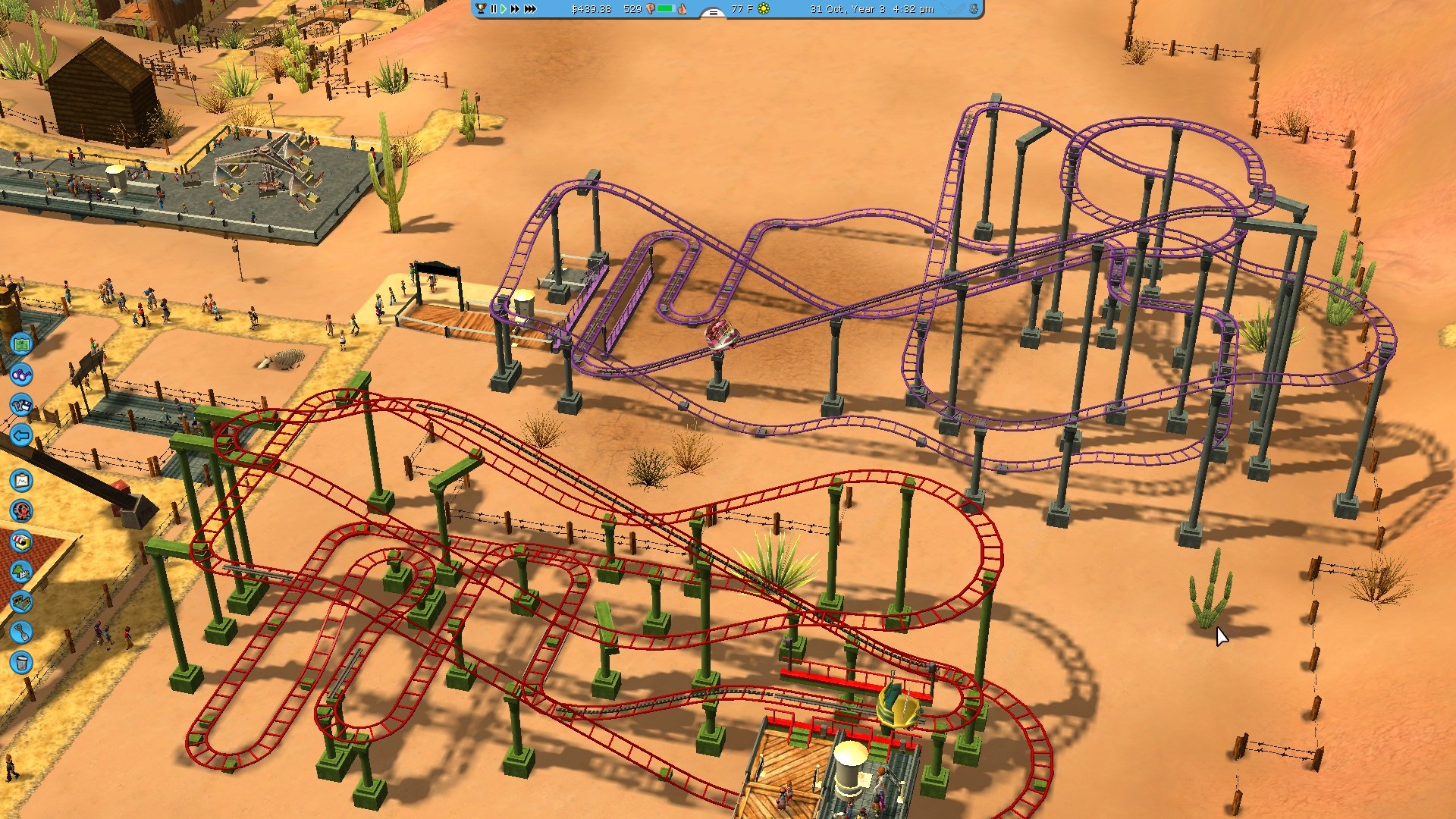 There is also a lot of ways you can try and bring in more people to your park. You could pay to put out an advertisement about the park or even offer coupons. Lower admission fees if that was an option you could change. Along with working on your park rating by making sure it's staying clean, rides are running, and guests are safe. There are quite a few manager type choices you need to think about and how they reflect your bottom line.

If you found yourself struggling for enough room to build more rides you could even buy more land. Since I was playing in career mode I never found myself needing to buy more land as I was usually done with the objects by then. In longer-term gameplay, as I would expect in sandbox mode I would expect needing a lot of land. 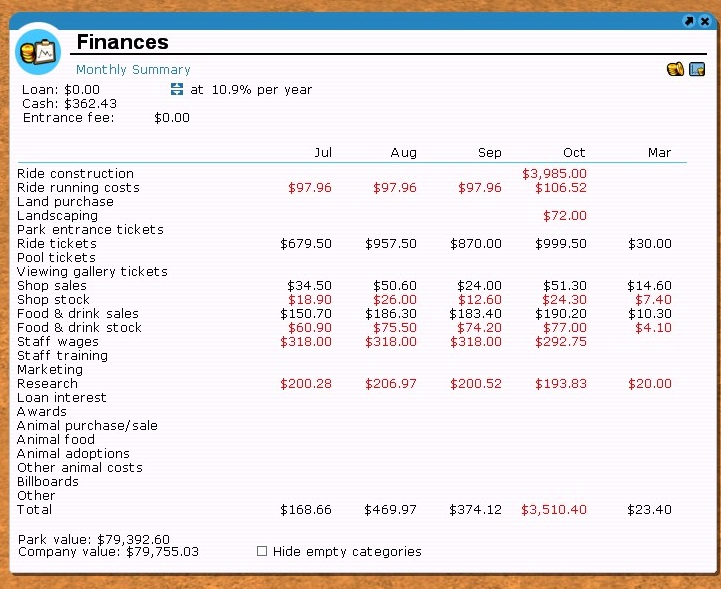 With this being a management game with a heavy focus being around earning money it does come with a monthly report system. Each attraction also has a breakdown of hourly profits or losses screen if you click on the individual buildings themselves. I do wish this was a bit more detailed as nowadays since I’m older I’m quite into detailed information sheets.

As far as this part of the game goes it’s not super complex like you find in modern-day games. Some days you just don’t feel like getting into an overcomplicated game either so this was perfect. There is enough there if you are into that kind of thing to have some fun. If you are like someone who just says whatever and lets issues turn into mountains before resolving them that work as well. The game can be quite forgiving by just taking out a loan and running some advertisements when needed. There are some fun things I use to do RollerCoaster Tycoon for the lolz of it. Some would say they were quite unethical. I would say it’s just a game and I was having some fun even if it was at the expense of a virtual park guest. While I’ll spare you some of these things as I have had to much fun in the past. I’ll share a couple of them.

I’ve always found it silly to be taking a loss at providing bathrooms in a park. In the real world that would be pure insanity to charge guest money to use the restroom. After all, if they are trapped in a park you would prefer for them to use a reset room instead of making a giant mess on a sidewalk. In the virtual world, however, that be 50 cents. My bathrooms were profitable! 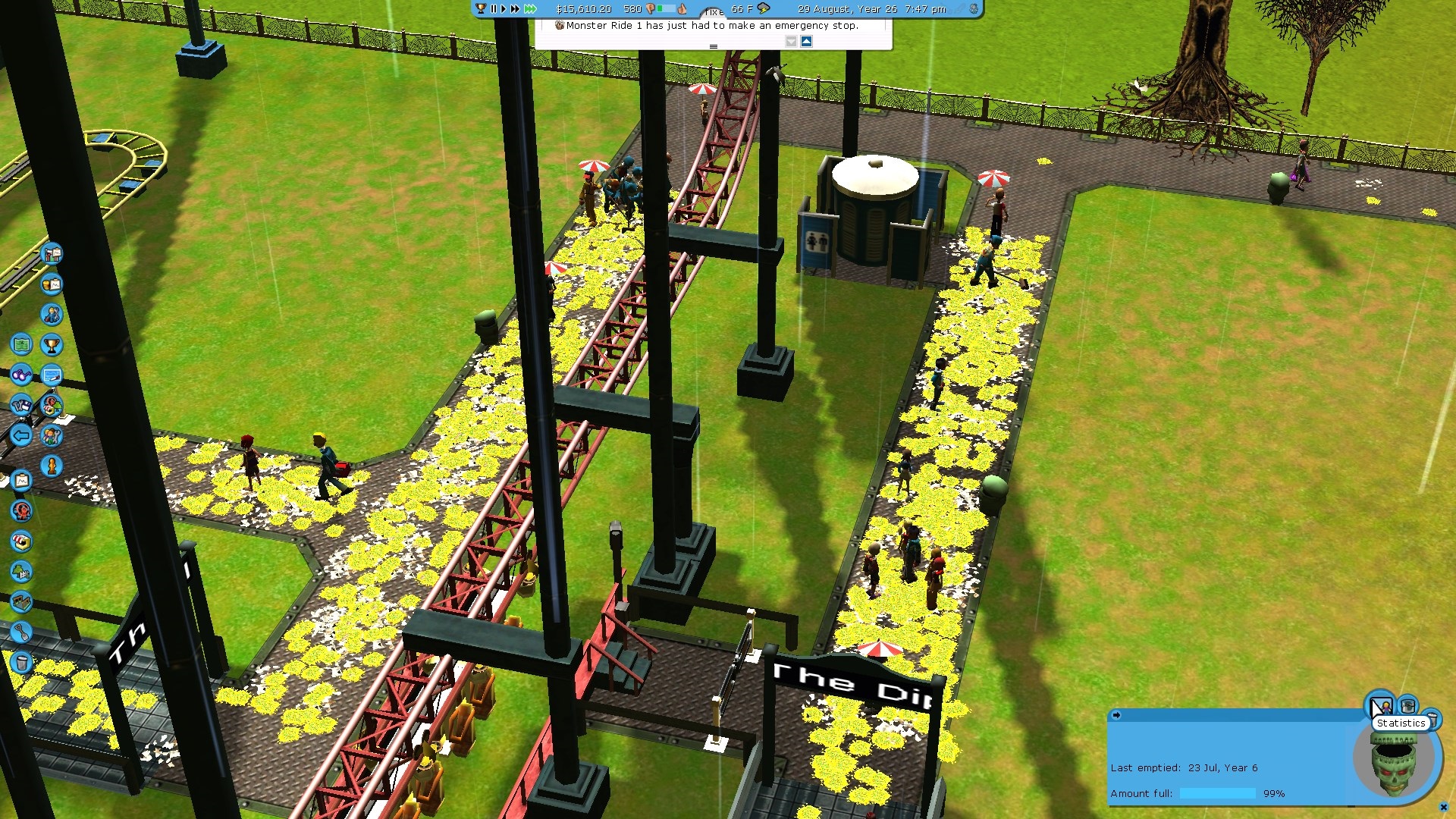 You also have the classic leave the game running while you go to bed or where away. Let it make you a bunch of in-game money so the next time you could play you would be loaded and could just splurge on some fancy rollercoaster. Since staff member can quite on you this left some rather disgusting moments of me returning to see my entire screen covered in puke and every single guest puking their brains out in disgust of all the puke!

Sometimes on purpose, I would forget to connect the exit of the ride to the main road. Sadly however the game closed this bit of fun for me. They would just walk on by to the next walkway even if it meant in the grass. This also meant I could not trap guests into an area and charge 500% for drinks and food.

The game making it possible for the guests to walk outside of walkways if needed to get somewhere stop quite a lot of my antics. I use to have so much fun deleting pathways out of the park or leaving people trapped in the back half and making them ride a train to get somewhere. I guess for ethical reasons it’s best to allow the NPCs to roam free until they find a pathway again. While this game is showing its age quite a bit and my graphics card would sometimes give me random black lines across the screen here or there. I had quite a fun time playing in career mode. I had never gotten around to playing the other RollerCoaster Tycoon games that I use to love from my childhood. I’m rather glad I spent some time on this one as it was my first time and an enjoyable one at that.

Screenshots were taken and content was written by @Enjar. Screenshots are from the game RollerCoaster Tycoon 3 Complete Edition. If you are thinking about getting this game and are looking to support me further consider using my Epic Games creator code: enjargames at checkout or using this referral link to be sent to the store's page.