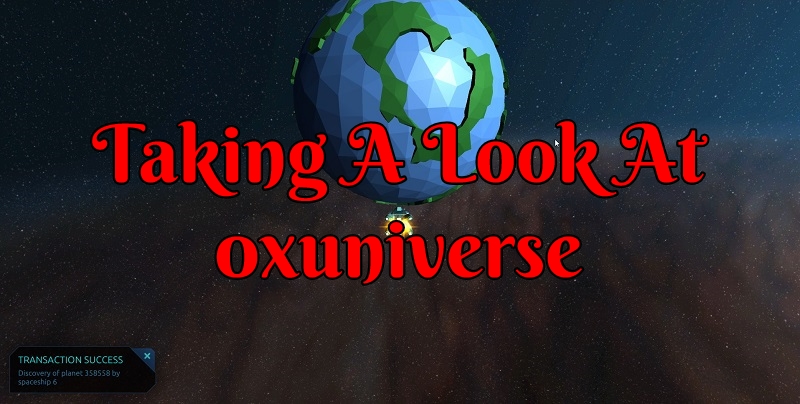 0xuniverse is a space game played on the Ethereum (ETH) blockchain either in a browser or on a mobile device. To get started players first need to buy some planets. After that, they can invent spaceships and launch them in search of new planets. Some transactions broadcasted on the ETH blockchain and have a gas cost while others are not. 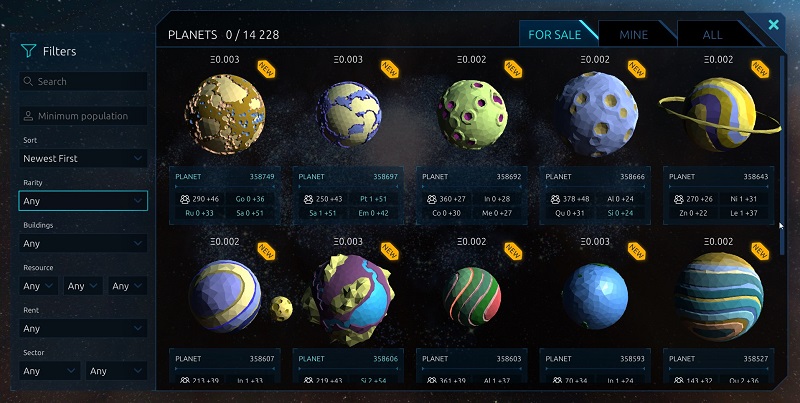 0xuniverse is not one of those games you can just play for free. You do need a little bit of startup capital and gas money. Along with having the MetaMask wallet for doing transactions on the ETH blockchain. It is however only a couple of bucks to get started and from there with some luck, you can build an empire.

One of the more interesting things is they try to help non-cryptocurrency users get into the ETH. They do this by selling via their Galaxy Hypermarket market planet bundles players can buy with fiat currency. These planets themselves are purchased by the game developers from the player market. They do charge quite the convenience tax (upcharge) for going this route. They also give the buyers a little bit of ETH for gas money. 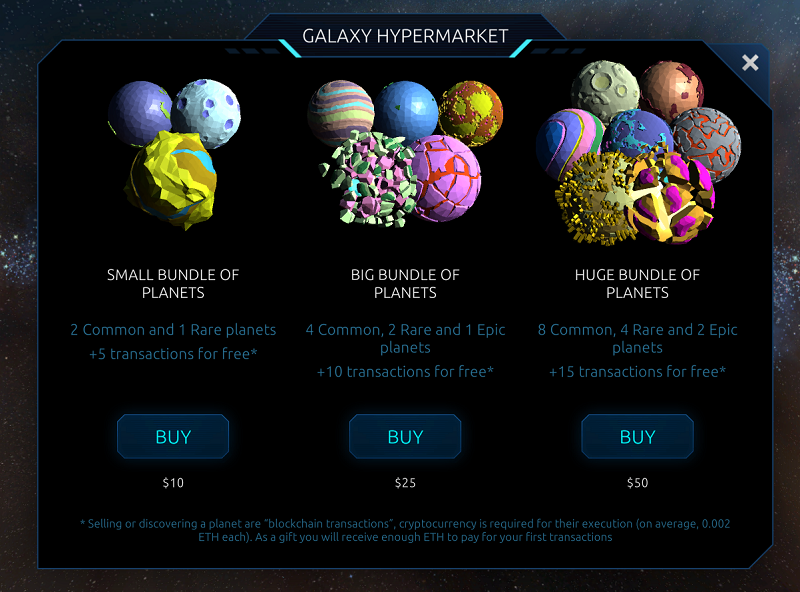 If we look at their most basic bundle for $10 you get 2, common, 1 rare, and a little bit of gas money. I myself have been buying rare planets between $1.12 and $1.55 including gas costs to get plants I want and can use. Those were also not the cheapest as I was willing to pay a little extra for planets with a higher population. It’s great they at least have a non-crypto option it’s just more costly.

The main thing you are looking for here to get started in this game is acquiring some population from your planet(s). Population determines how much knowledge you learn which is used for spaceship invitation. You will also need some resources from those planets to build the ship itself.

So you want to find a legendary planet do you and list it for 20 ETH or more? Well, you are not alone in that dream and they are also quite rare. There are a number of things involved in space exploration that make up this next part of the game.

As I’ve said before the population is needed for research which is then used for spaceship invention. I myself aimed for having over 10k population in total. Each time you create a new spaceship which is random to a certain degree the more time it takes before you can do so again. My current one is tasking over 24 hours with an even bigger population.

Spaceships have an RNG component to them that controls how good they are, how much they cost in resources, and the population it takes to man it. The lower ships might only have a thruster of 1 and a radar of 7. While they tend to have a very low cost in materials and rarity needed for launching them. They also like all others who have a gas cost of a couple of cents usually around 5 to 12 for me and won’t find anything. 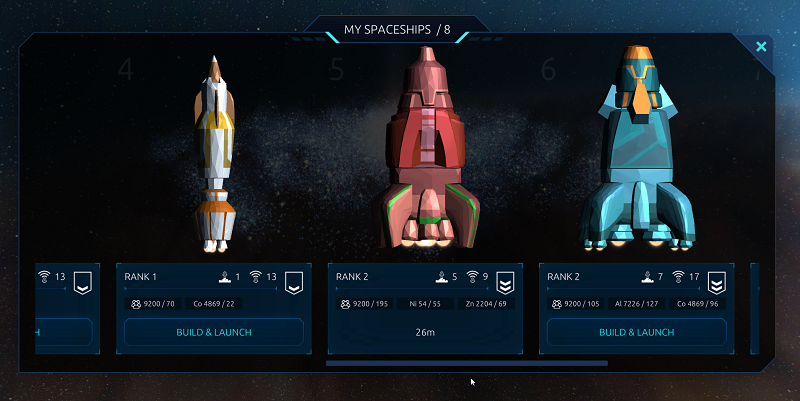 I’ve sent a couple rank 1 ships out and they have all found nothing. The thruster value factors the chances of you finding a planet. Meanwhile, the radar has some impact on the rarity. After I started using a spaceship that had thruster 7 and radar 17 my chances increased by a lot in finding at least a common planet or better. Still, these are not that great and I still have quite the high risk of not finding anything and being out the cost of ETH gas.

While it’s tempting to wait quite a long time and get some crazy spaceship that will surely find you that legendary planet if you are lucky. The cost for that kind of ship is expected to be higher rarity materials that will cost a decent amount to purchase plants that produce those kinds of resources. 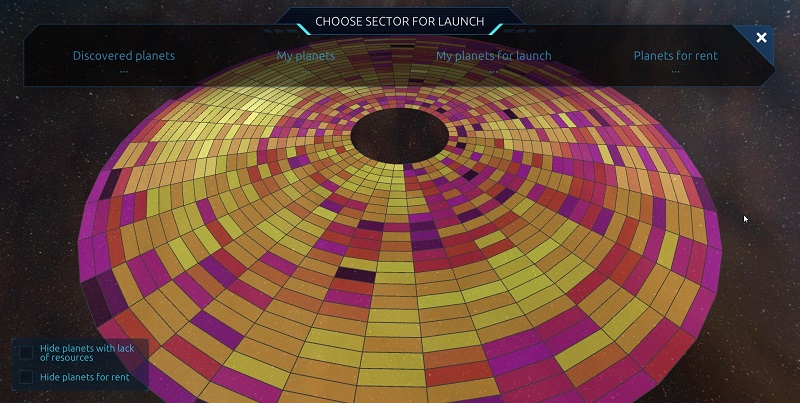 While this might look overwhelming it is just the galaxy broken down into different sectors. Each one shows you how many plants have been discovered and what they were. There is an upper cap of 1k planets per sector.

The most important thing here is where do you want to launch from? If you have a large population and want to search for a planet in a sector you are already in you can use your own population. Also, the resource is automatically transferred without any wait time so you don’t have to worry about that part as long as you have enough.

If you lack the population or want to explore a different sector you can pay to rent the population from another player. This is one possible way to earn some income in this game by allowing your plants to be available for other players to launch from. 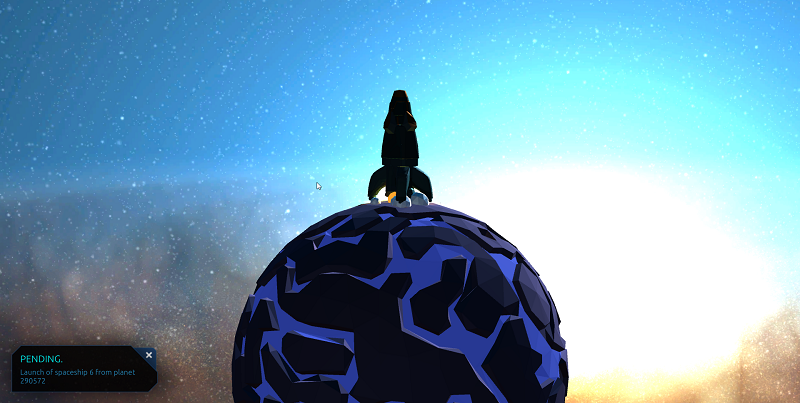 Once you are all ready to go it’s time to pay the gas fee with a transaction to the ETH blockchain and wait. Hopefully, you find a planet and it was worth quite a lot or had a needed resource you are looking for. Waiting can be the hardest part depending on how low you want to pay in gas. Sometimes it’s only a couple of minutes. Other times hours if the ETH blockchain is busy dependent on how much you want to spend.

I myself have had quite a lot of failure in finding anything. I have found two commons and an epic planet as well. I’m still hoping to get a decent ship that I can use for a couple of explorations. So I’m holding off for now till I get something that will yield a better chance.

With this being a blockchain game I know many are always interested in knowing the financial side of things. How much have I spent? How much have I made? Along with any other insights. I’ve not been playing too long so there not too much to report.

In total so far I have purchased 5 plants for population or resource production to meet ship requirements. This totaled $6.73 worth of ETH at the time. With an added 39 cents in to pay for the gas of those smart contracts to buy them.

As far as gas cost for exploration and anything else that required a smart contract I paid another 69 cents on top of everything else.

So far I’ve spent $7.81 worth of ETH playing this game which is not to bad so far. Even if I don’t buy any more planets that will increase over time if I choose to list things for sale or do more exploration. I’ll admit I’m not so thrilled with how much of my total gas ended up being. I’m willing to admit I don’t use ETH a lot so I’m sure I could have reduced my costs by some on that front.

As far as any profits I’ve not attempted to sell anything yet. The number of assets I am holding comparable to what people are trying to sell them for dose exceeds by an ok amount of what I’ve spent so far. 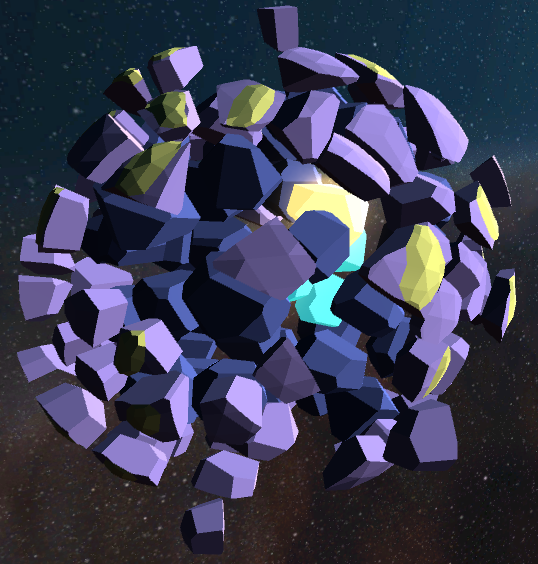 This is mostly due to my epic planet find. The cheapest epic planet on the market at this time is .011 ETH which is around $2.86 just for that single planet not including everything else I have. That is however not how I’d price the planet I got. It has the resource Unobtainiumon (UN) on it. The cheapest planet for sale on the market with that is .038 or around $9.88 and mine is a little better than it is.

If we consider I was extremely lucky on that Epic find which I was and it was only a common instead. I would come out about 20 cents ahead if I was able to sell everything for the price I bought it. Expect whatever my final gas prices are which I think I’d be taking around a 10 to 20 cents loss. This is why you can’t forget transaction fees as they always get you in the end and can add up over months and years! 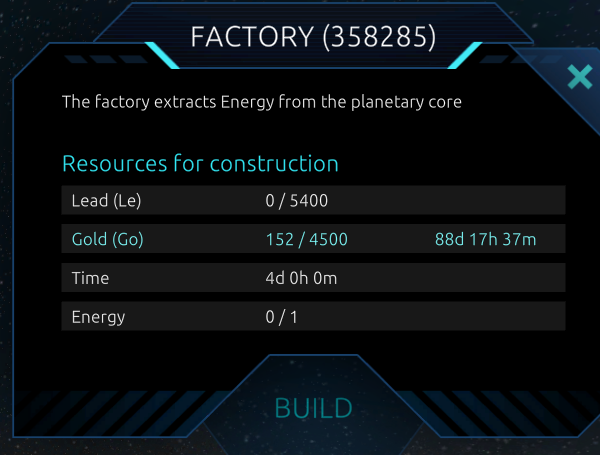 I’ve not done everything yet that is available at this time in-game. It is also still being developed with some cool stuff on the way like ships, combat. So far only one person has found a black hole which I have no idea what those even do!

Building on planets is not something I’ve done yet either. They cost quite a bit of resource and allow you to create energy. This from my understanding will be needed later on once they add in more features needing it.

There are also things like corporations. Which frankly I don’t have a clue by just looking at them what they are all about without getting more involved in trying one out. I will more than likely do it at some point. 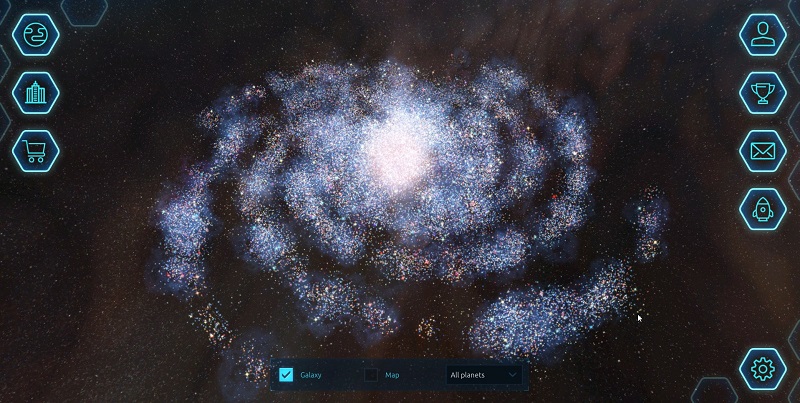 This is going be a game I plan on playing further. I like the fact it does not consume a lot of time to play in a given week. It also does have a fair amount of waiting around for resources and knowledge. So if I forget about it here or there that not a big deal. In the future that might change with all the cool stuff, they have hinted at adding in later on.

Screenshots were taken and content was written by @Enjar. Screenshots are from the game 0xuniverse (non-referral).

If this sounds like a game for you consider using my referral link.