Raft is an open-world game where you gather and craft to expand out the raft you are floating adrift on. Overtime you expand out your capabilities by making the raft a base of operations. While you go out and explore the vast world of islands, and other places of interest this game has to offer. I love the concept behind this game. You start on a very small platform floating in the middle of the ocean. You try and capture floating debris and build out your raft out further. Raft is love raft is life.

In games I’ve played in the past like Ark Survival evolved where you could build a raft it was not the focal point. While I’ve had a lot of funs in a game like Ark and I loved trying to live on a raft. As anyone knows who plays that game you are quite limited by how big you can make that raft and how capable it can even become.

With Raft's main focus on survival from living off the raft, it really comes down to how much time you want to invest in collect and building things out. I build quite a mightily platform that more than suited my needs. With no worries of hitting a building limit cap or anything of that nature just an annoying shark that would try and damage it from time to time. It has been rather a smooth sailing when the seas are not rough. A large component of Raft is building and crafting. You start with very little and almost no space to move around. Along the way you are also dealing with a shark trying to attack the raft and yourself when you jump into the water. With a little bit of waiting and collecting things start to shape up to become a small village if you are willing to put in the time to go that route.

The player needs to unlock crafting recipes and that is done in two major ways. The first being just putting random items you first get into research tables after you have built it and unlocking higher tier items. The second is finding blueprints and putting them into the table to be researched. Building just the raft part of things alone you have a few pieces to choose from. With different kinds of foundation pieces such as wood or even metal. Along with walls that are made out of wood or thatch. You even need to support the lower levels with pillars and can build the raft quite high. I only went three stories up but I have a feeling you can go quite higher.

There are also several crafted objects for the raft itself you can make along the way. From a simple sail and streamer to take advantage of the wind in the game. Up to building an engine and using an antenna to get locations on a receiver. There is a lot more to it than just drifting along where ever the ocean winds take you. You can also become rather self-sufficient overtime on your raft without having to jump onto islands for things like food. You can build crop plots to grow potatoes all the way coconut trees. Have a couple of different kinds of purification systems and even a grill to cook fish and vegetables on. 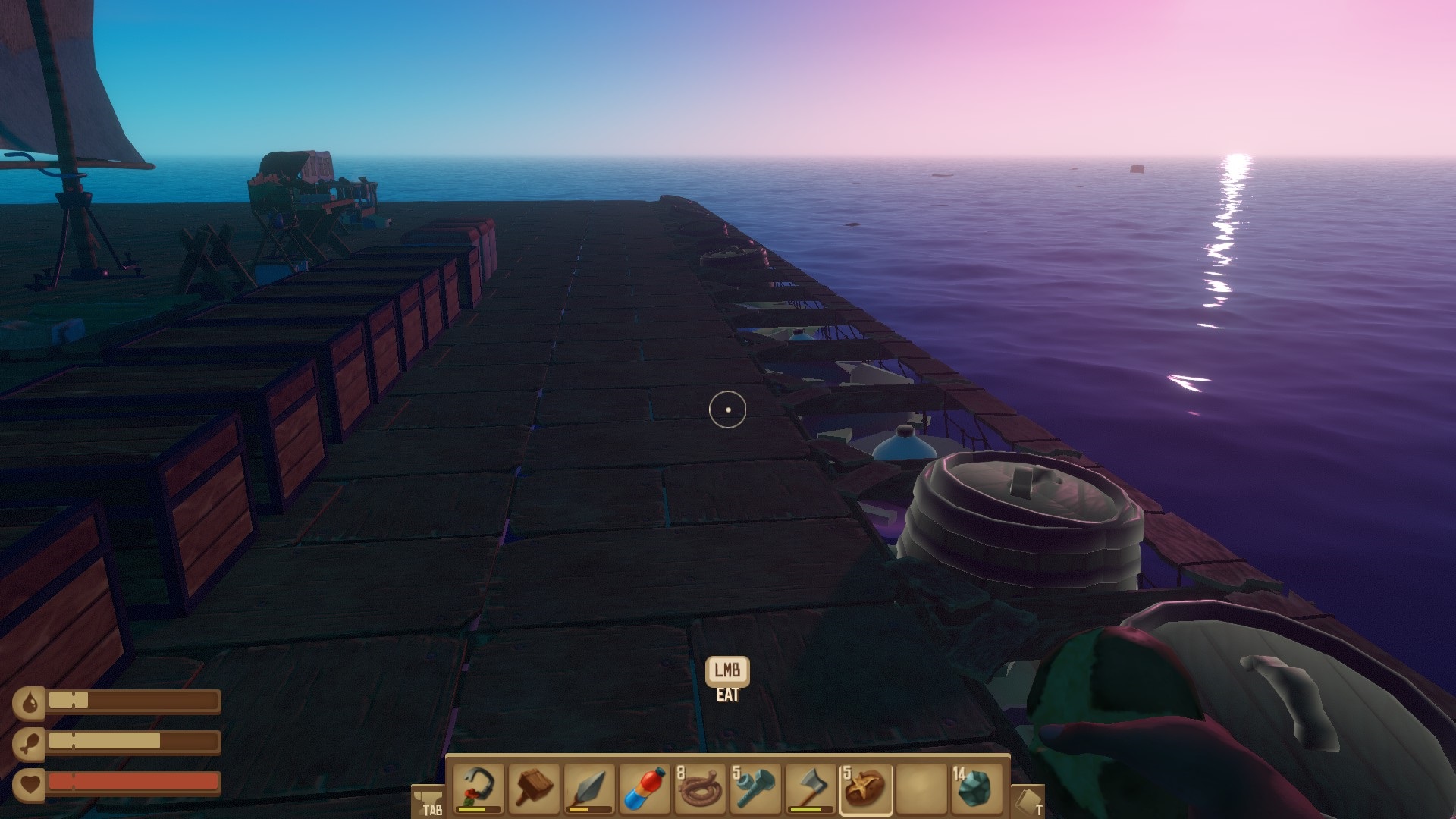 I also liked the more basic items tend to have the economics of scale. You start just trying to hook things with a basic hook and rope. Later in-game if you build a massive raft you line it with collection nets that almost bringing in more of the basics than you will find a place to store it.

Not everything is gathered from the water’s edge, however. The more advanced stuff you tend to find below around islands where you are endlessly dealing with a shark that stalks you. Requiring say copper tended to be my main driving force behind wanting to seek out an island to go diving off of and check to see if it had any to farm. 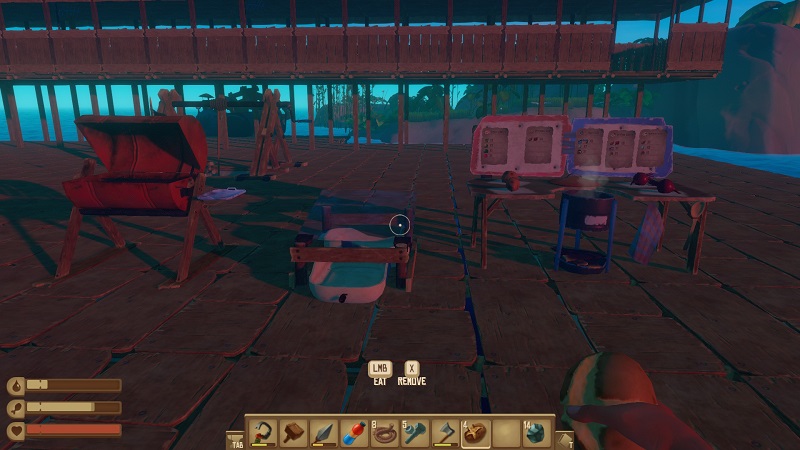 The game even has a bit of a cooking system. Where you collect reprices not by crafting but from finding them in chests. There are several different ingredients like potatoes, beets, mango, watermelon, pineapple, coconut, algae, fish, meat, and so on. If you are playing with others someone alone could role-play as the rafts chief!

I felt overall building and crafting was sufficient. It was not overwhelming to the point you needed to personally take notes of a large list of sub crafting to get to a final product. It was also not to a simple where you just go around collecting the same three things that make everything out of them either. Raft does make you feel like you are in some kind of water world. As it is mostly comprised of water and islands for the player to gather and explore on. There are a couple of other things in-game but I don’t want to spoil too much of the game’s storyline which seems to still be in the works with updates once in a while.

While I do wish the average island was a bit bigger. They usually provided three or four minutes of gathering and exploring for any loot chests before I found myself going after the main reason I seek them out for would be around in the more shallow waters.

The islands themselves can contain quite a lot of different trees and even collectible plants. So they are not something you want to skip over either. Most of the time they are not important enough if you skip exploring one you need not worry about missing something. That I rather enjoyed as I was not always in the mood to explore yet another island after my first few dozen. The game also boasts quite an interesting underwater scene. While it was nothing like Subnautica in terms of depth you did not feel too overwhelmed either when driving down off shorelines into the shallower parts that you could gather from.

The downside to being in the water is the shark you are almost always being confronted by. While you can kill it or trick it with bait. It will over time respawn or take notice of you once again and try to hunt you. There are also other creatures in this game. So exploring is not always a peaceful adventure. There are a lot of other things to explore in this game. You will find above water shipwrecks, bigger islands, and who know what else the game developers will throw at us at a later date. Which is always great for breaking up whatever short crafting grind you are on to stop and enjoy the beauty the game has to offer. For a game that is in early access, this one is quite playable and enjoyable. I did not find the crafting process outside of wanting to make my raft huge to be a massive grind. There was even a storyline once you got far enough along to discover it that had some interesting things to read while you work on progressing forward. There is more than enough to enjoy quite a few hours alone or with a couple of friends floating along the ocean trying not to be shark bait.

Screenshots were taken and content was written by @Enjar. Screenshots are from the game Raft.