Dauntless is a free to play ARPG with a heavy focus on slaying monsters and creating upgrades with the loot the player acquires. If you enjoyed a game like Monster Hunter World than Dauntless should be right up your alley. While it is not as story-rich as Monster Hunter World, Dauntless feels like there is a lot less grinding to be able to upgrade a single piece of gear, level up, and face new challenging monsters. A major staple in Dauntless for the player is running different kinds of hunts from pursuits to patrols. There are quite a few different options that have quite focused rewards for the player to earn. These challenges can be run as a solo player or in a group. Sometimes the game will guide the player by offering quests other times you may simply want to hunt a certain monster for their drops.

When you are not spending time in the main town working on other aspects of the game you will find yourself in the queue or on a hunt. I have been playing both as a solo player and running in pick up groups to see the different kind’s experience the player has to look forward to in Dauntless.

If you are in a hurry feel like you have decent enough gear soloing can be the way to go. Often it only took around 20 seconds to get an instance started. From there the game has a period of gear selection if you need to make any last-minute changes to your set up. Once you start the hunt you can no longer make any changes. Those who enjoy playing with others or are struggling and hoping to get carried by a group can go premade pickup groups. During peak hours it only took a couple of minutes to get put into a group if you don’t have anyone else to play with. During the off-hours, you are lucky to find another player after waiting for five minutes depending on what you wanted to do.

When you do enter a hunt with a group the difficulty scales with the group's size. If someone in that group has an amazing gear set up there is a good chance they can carry even the worst of pickup groups for the less challenging monsters in the game. Mid to late game however they tend to drop out of the party as soon as they notice others cannot carry their weight. So it can be a hit or miss sometimes.

I think the coolest thing about hunting with a random group is Dauntless being cross-platform. Depending on the time of day I would see different kinds of platforms have a heavier presence over others. This included PC, PlayStation 4, Xbox One, and players on the Nintendo Switch. What I do love about the hunt system, in general, is your ability to focus on what you need. If you just need to monster parts you can go after pursuits where the game clearly shows the player the different rewards from the hunts. If you need another kind of ingredient called orbs they have patrols where you can acquire quite a few per hunt. Everything is further broken down into different resistance types to make it easier to locate what you might be interested in hunting.

Another thing the game does well is a tie-in rewards for using different kinds of gear and weapons. The game has a mastery system that gives the player different objectives to go after for all the different kinds of monsters and gear in the game. For instance, slaying a certain type of monster wearing the gear that you craft from its drops 10 times is one objected most of the time. Completing these help level up the players level and the masteries level that grant rewards from loot cores to increased max health.

The game also further goes on to give the player quests and bounties. Quests come with a little bit of a story but not too much that usually unlocked new monsters to hunt. While bounties on the other hand reward you dealing with certain types of damage, getting enough kills on a selected monster and other objects.

In quite a few monsters hunting focused games you usually get to point of not needing to go back and take down monsters, you have already done so. Between questing, bounties, masteries, and crafting you have a lot of reasons to go on the same hunt for further rewards if you choose. Another major component in Dauntless is crafting or upgrading new gear and weapons. Dauntless has a massive range of different kinds of gear that have pros and cons for the protection they provide or damage they deal with. Along with quite a few other things that make or break a setup.

Early game I found I didn’t care too much for crafting all the new sets I was unlocking of gear and weapons. I felt one or two sets of different gear would be able to get me through most things. As such it did not take much grinding to acquire all the crafting ingredients needed to make needed items to advance further along in the game.

The actual crafting and upgrading items are quite simple. Most items require three different types of ingredients to craft or upgrade. Rams which is in the in-game money you earn from doing things. Monster parts which are acquired from slaying or breaking off different sections of a monster. Finally, orbs which you primarily get from running patrol hunts. Once you have everything just click the button to craft or upgrade. 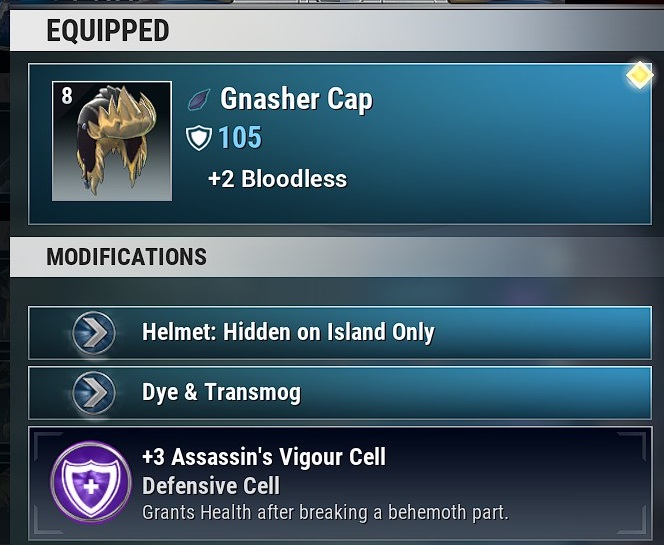 Somewhere after the early game and before mid-game is where crafting started to pick up for me. I started to want all 17 different sets of armor that I unlocked crafting for. In part for the resistance power they provide or abilities on an individual item. Along with wanting to complete masteries for the rewards and player experience for crafting each set and upgrading them to six and ten.

While leveling up armor or weapons increase the item's power. There was a far more important benefit I started to become interested in mid-game. Each item itself provides different perms ranking from levels one to three. With a basic piece of armor providing only one of that perk while a higher level would give you three. This became quite important when I wanted to have a setup I was running become maxed out. Perks themselves max out at level six for max effect. The only other place to get perks is from cells that can give up to three levels themselves. The catch however is different armor has different cell types and perks. You also can the equipped one cell into a piece of armor the weapons has two slots. 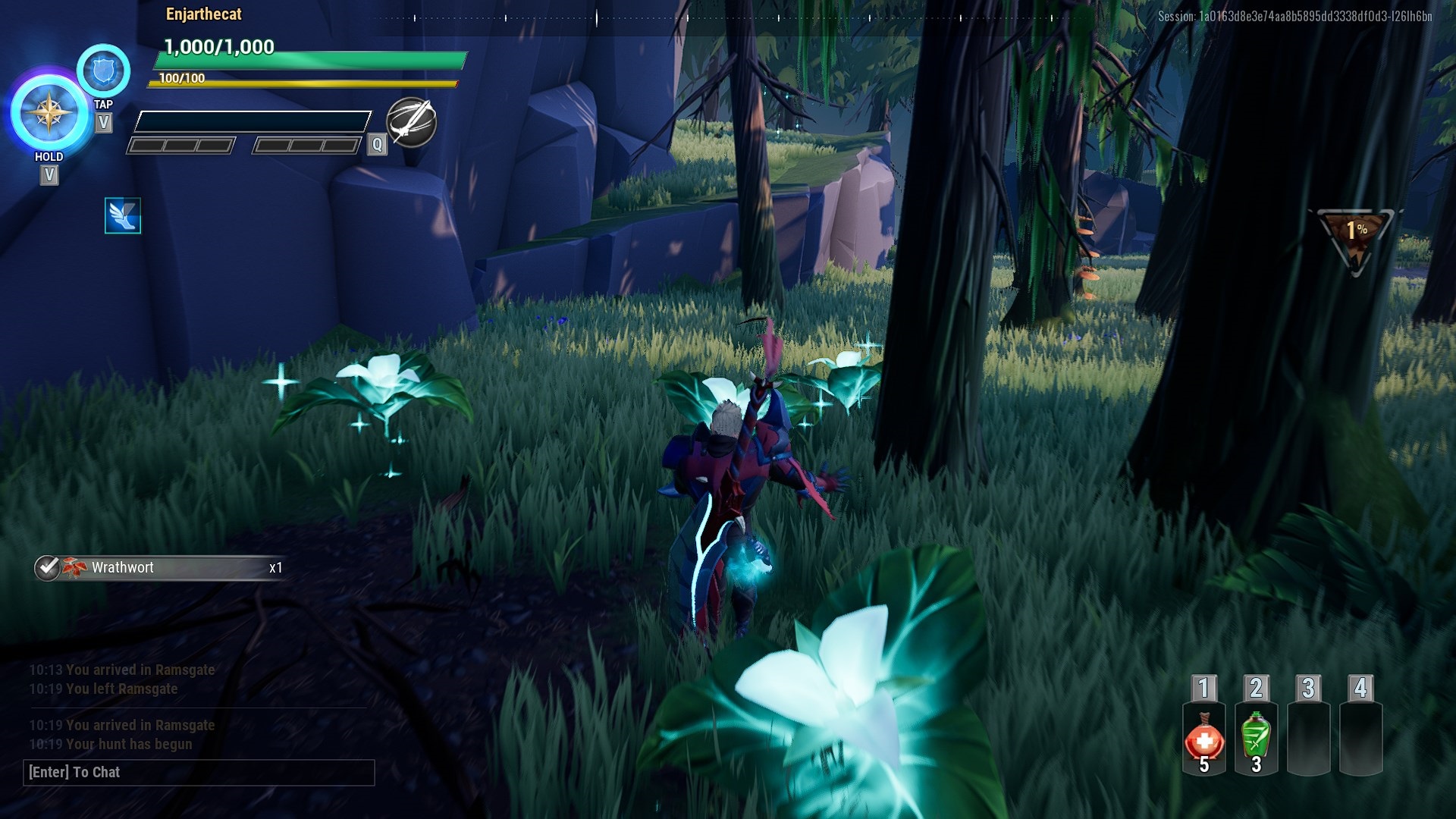 You could also gather herbs and ores during a hunt from the environment such as plants or rocks. Those could be crafted into different kinds of consumable potions. Potions themselves had a limit to how many could be taken into a hunt. The potions could allow you to heal, increase attack for a limited time, and even reduced damage taken.

Once you learned the basics in how the crafting in Dauntless works. The challenge tends to be in making sure you break the right part during a hunt to get the crafting ingredient you needed. Along with learning harder fights and getting the needed gear to stand a chance. 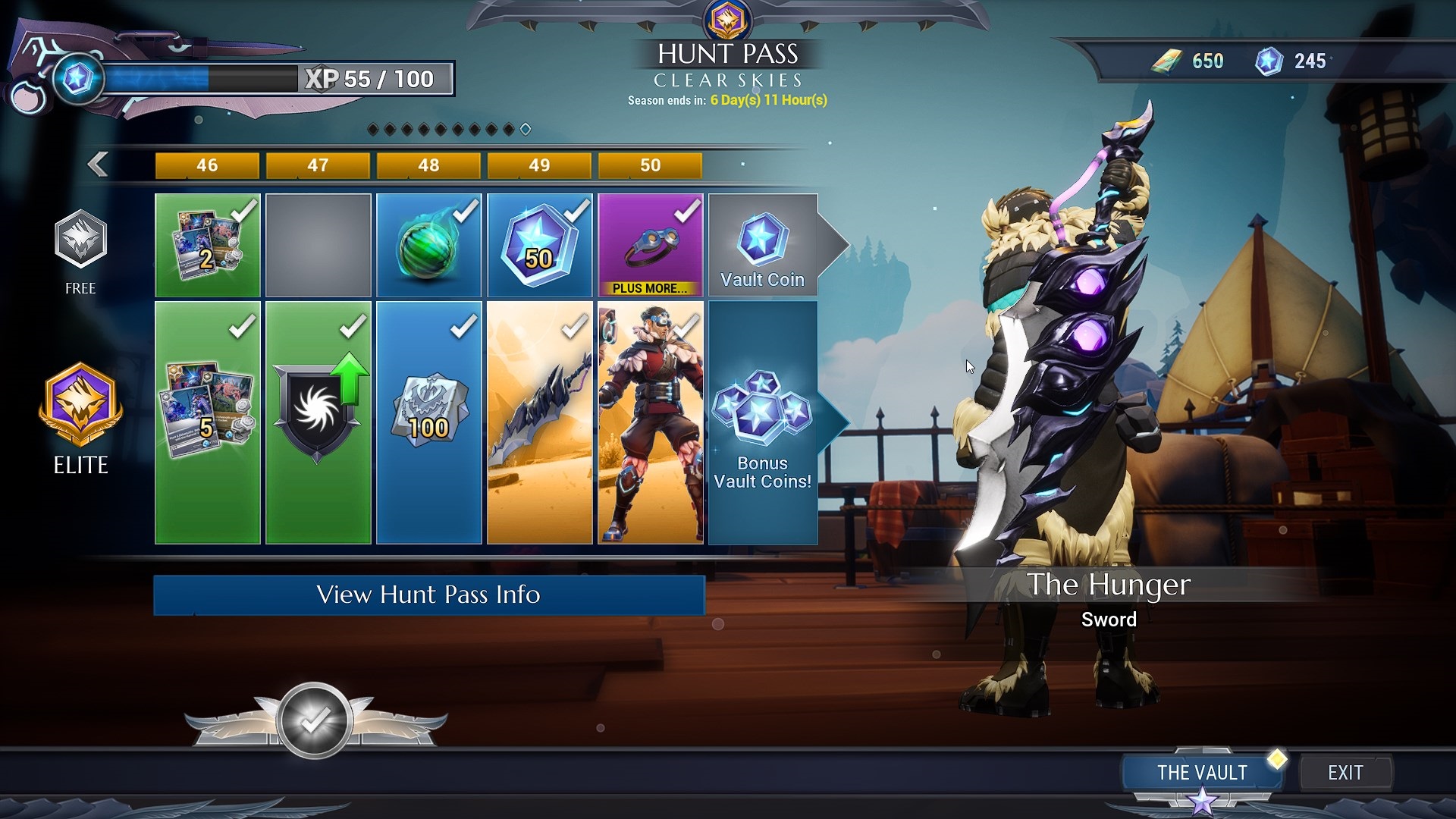 With Dauntless being a free to play game it does come with microtransaction. For the most part, there is a heavy emphasis on item skins. Everything else in there I could call a convince purchase which I’ll get more into down below with the only exception would be any items acquired for having an Elite Hunter Pass.

I am always thrilled when I look in a microtransaction shop to find they are mostly focusing on selling skins for different items. Each armor or weapon in a game seems to have a different skin that can be purchase for it. These are just cosmetic changes to the items themselves. 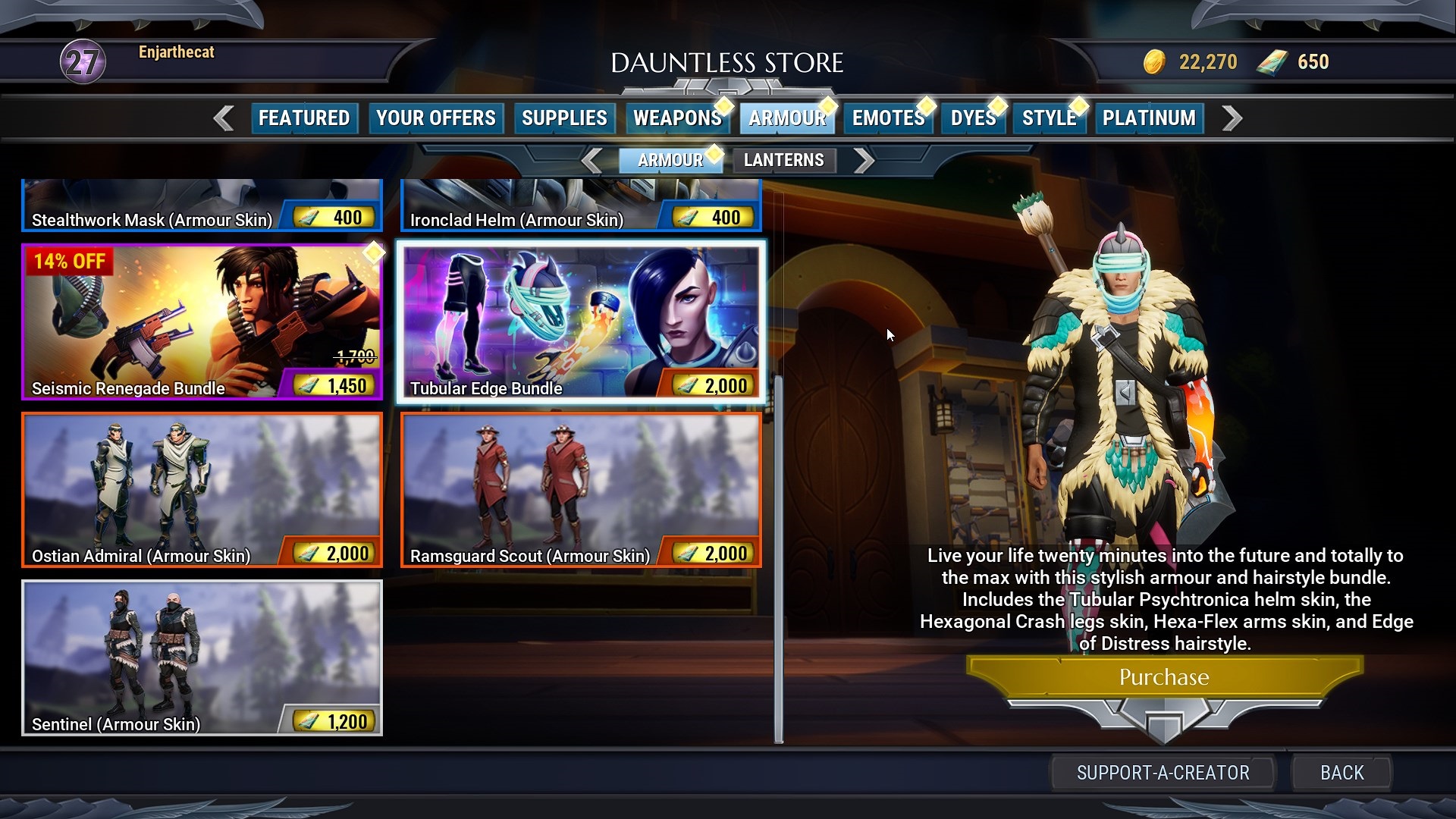 Furthermore, the game is selling things like emotes, style, and the ability for players to dye there gear. Again none of these gives anyone an advantage over other players or makes the game easier. If someone wants to drop $100 they can be one of the cooler looking people in the game.

There are also some boosts in the shop. From things like bounty tokens which you earn overtime to start a new bounty. To things that are more consider an actual boost like escalations boosts that simply allow a greater amount to be earned from running them.

The biggest thing in here is upgrading your hunt pass for each season to elite for 1k Platinum ($10.) This only lasts during a single season that grants a couple of extra items at most to drop during a hunt, 50% increased mastery XP, and unlocking the elite section of the season rewards. The season rewards themselves grant things like vault coins to buy skins, a couple of items, bounty tokens, and some other stuff.

I ended up only spending $5 for a one-time special package that granted me $10 worth of Platinum and some other goodies. I then used that to unlock the season elite pass for all the benefits it provides. I didn’t feel like I had to spend any money to be able to enjoy the game. This is always a huge plus in my book when it comes to free to play games. I equality enjoyed Dauntless as much as I did Monster Hunter World at a fraction of the price. Finding a group to take down a challenging hunt was made quick and easy. Crafting gear and upgrading it also was not an intensive process either. The major part of the fun in this game was just hunting different monsters and learning there fights sometimes if brute force was not enough to get a win.

Screenshots were taken and content was written by @Enjar. Screenshots are from the game Dauntless.

Consider using my Epic Games creator code: enjargames at checkout on any in game purchases.