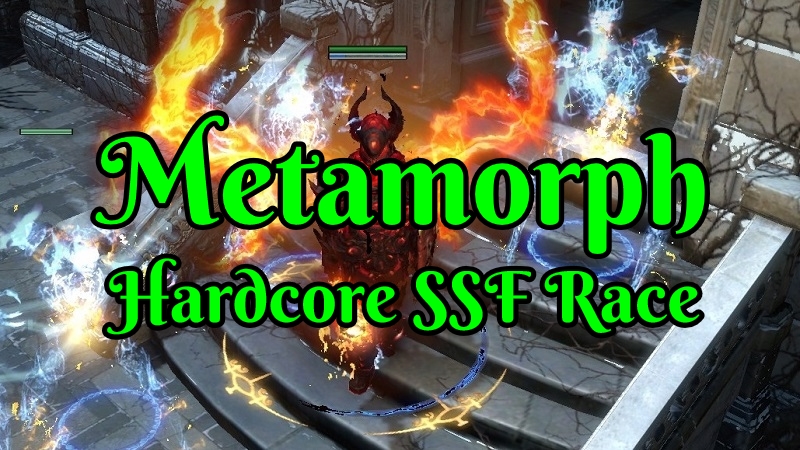 Let the bodies hit the floor and cut the flesh while it’s still warm and tender from the competitors. You would think Christmas has been canceled from Path of Exile with how dark-themed the Metamorph challenge league is shaping up to be. More on that in another post where I give my thoughts leading up to this league before it starts.

As fate would have it, @Mattclarke is hosting a 24-hour hardcore solo self-found race and he even managed to grab some sponsors to boost the rewards.

For those not in the know as you live in a deep dark dungeon. Path of Exile is free to play ARPG and in my opinion one of the best ones out there at this time. You could go download the game right now and join us for a bit of rippy fun in this hardcore race. I’m sure you will do fine and die less than I do.

Speaking of death I’ve joined in on a few of these hardcore races in the past. I’m more of a play in the softcore league pool and jump into the freezing hardcore one once a league. Which from how amazing Path of Exile is of a game we get a couple of these a year and they tend to be game-changers.

I’ve died everywhere and on everything. From spikes, bosses, Kitava (don’t know who that is? Oh you will dear Exile), lag and not always the one in-game. Who knows what final fate awaits my characters.

For me, these have turned into more of a tradition of entering them and getting the floor wiped of me than anything else. While I have won some races in the past and hope to add another notch to my belt. I just enter them for the fun of it-- mostly.

This time around I’m thinking I’ll be playing a Shadow. It’s been one of my more favorite classes as I prefer being up close and personal. While also being a bit nimble and fast enough to not get one-shot most of the time.

As always I’m coming into this a bit rusty. Once I had finished off the content I wanted to make last league I stopped playing. I’ve only logged in to check out some sweet cosmetic skins I won. Thankfully I no longer look like a peasant after a number of years playing this game.

December is quite a busy month for me. I’ve done my best to clear out my schedule. I also plan on playing it casual and taking my time leveling. This, however, might change if anything comes up. I can and have made some mad dashes in the past from getting killed or being low on time.

With some of the changes that are coming our way this league along with the main game. Rushing might be a fool’s errand and a sure way to end up in the graveyard. In which case I have some Black Label whiskey to keep me warm and wash away those deaths.

This is my entry into a hardcore race. Find out more details here.