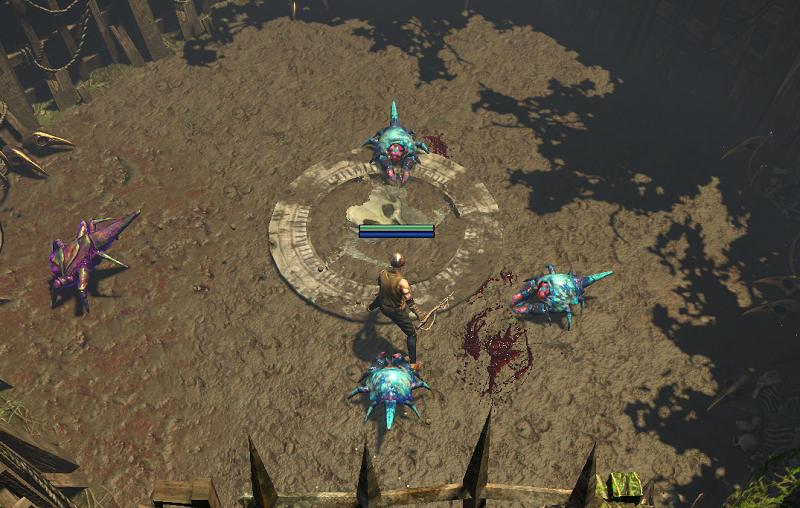 I’m in a race lets go sightseeing! Those others can rush to their deaths. I’ll just make yet another toon and enjoy things.

Ok, ok, so I did some leveling, encounters first. Then I went sightseeing and did some testing. 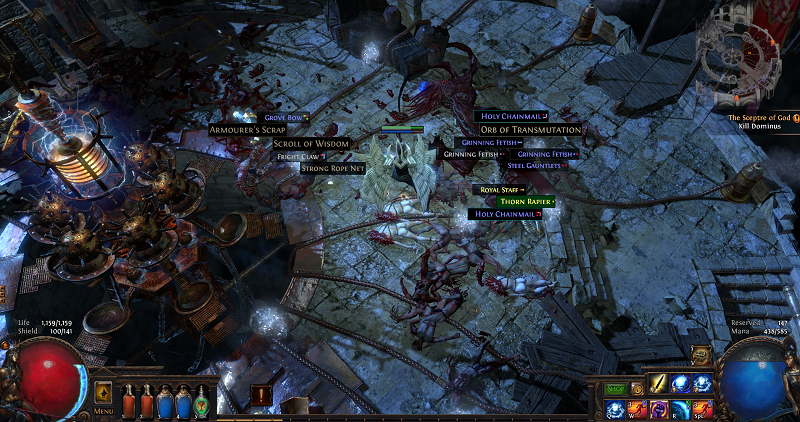 My time was little more limited for day 4 and the game seems to not want me to be around either! This Dominus encounter went on without much difficulty. Expect after he was dead it took the game what seemed like an unusually long time to notice I had won and given me credit. I’m just glad it did as servers seem to be having some issues. I also could not create another instance to grind out levels for last zones and had issues connecting to even new instances where it gives me an error.

If that was not enough of a warning sign to stay away as a hardcore player. I was also crashing and getting error messages. As a result, I ended up making and leveling a toon to 10 and testing out league mechanics. Which some others seem to be reporting some crashing issues as well on their forms and people I’ve talked with. 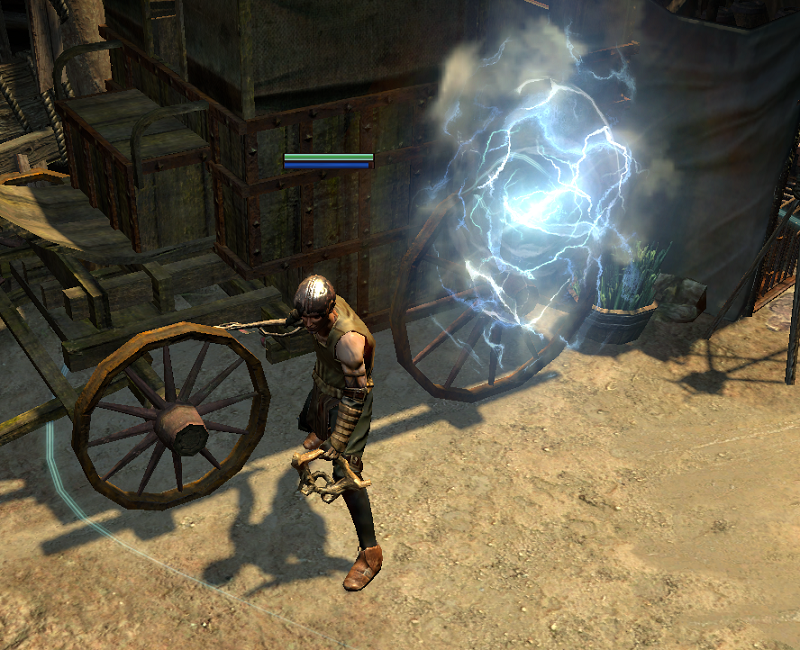 Here he is your tour guide SHR_Enjar_IVBestiary for the Menagerie. He is rather new on the job. In a former life, he might be a bit of a grave robber. Don’t worry we don’t think he has robbed the living in a while now—maybe. 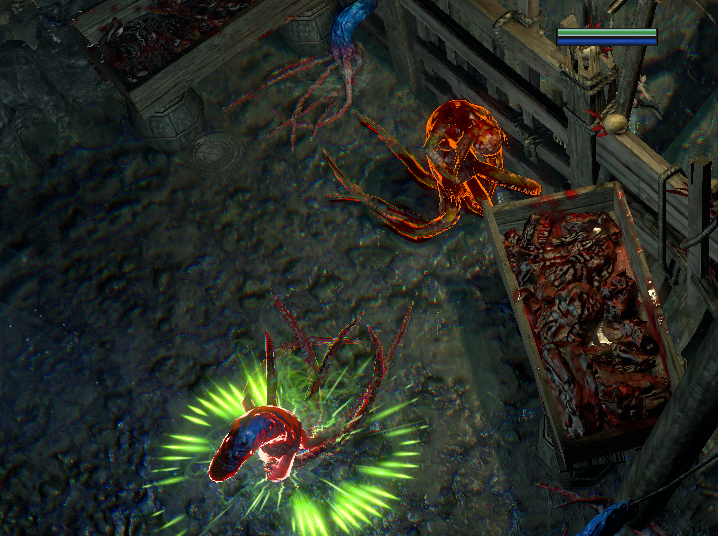 Here we have some tasty Cephalopods. Ranging from level 5 up to level 22 we have a Siren’s Spawn, Horrorclaw, and even a Blood Princess. 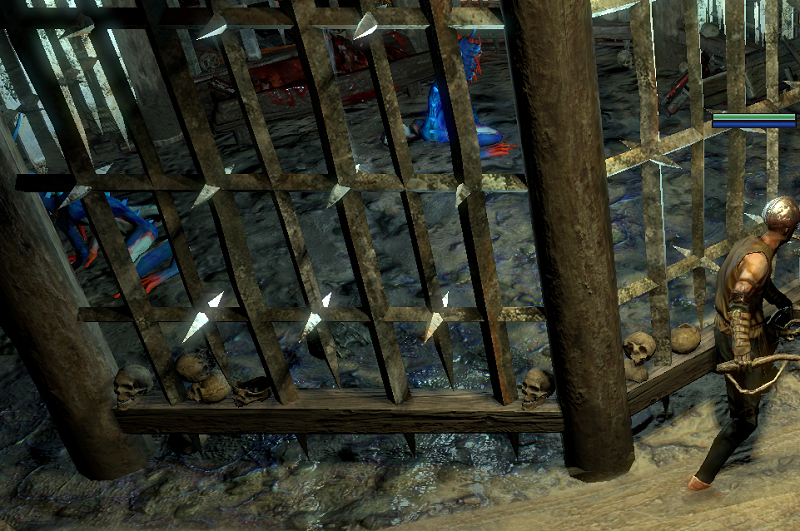 Over on the left, there is a pair of Amphibians. They are much higher in level and we are hoping to capture more soon. So far just a level 32 and 33 Chimeric Croaker. 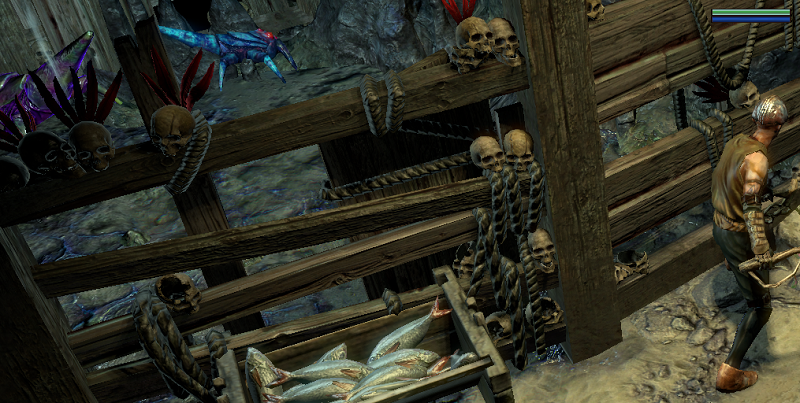 Next up are some Crustaceans. Stand back a bit the Rock Spitter can and will spit rocks at you through the gaps in the wall. The other day she injured 4 tour guides. Hey, that is also when I was hired on-- hmmm. 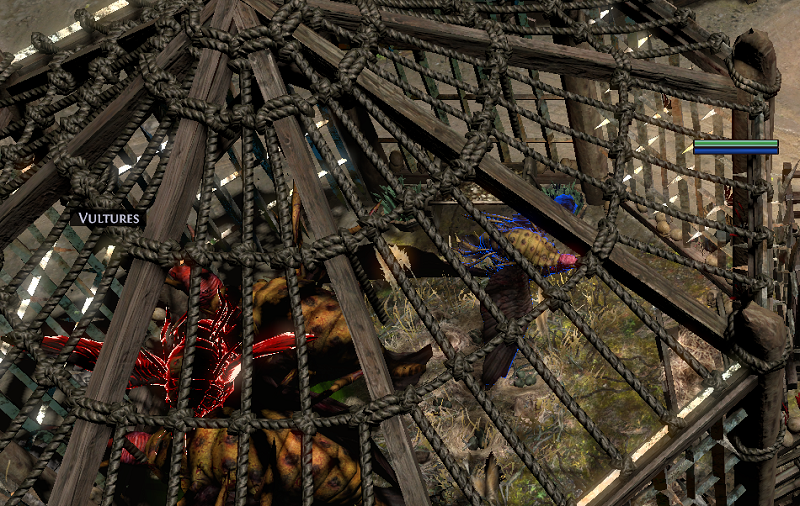 This Avian bird cage is filled to the brim. They have even been fighting among themselves. Out of their ranks, a level 33 The Hundred Foot Shadow was proven almost deadly in its capture 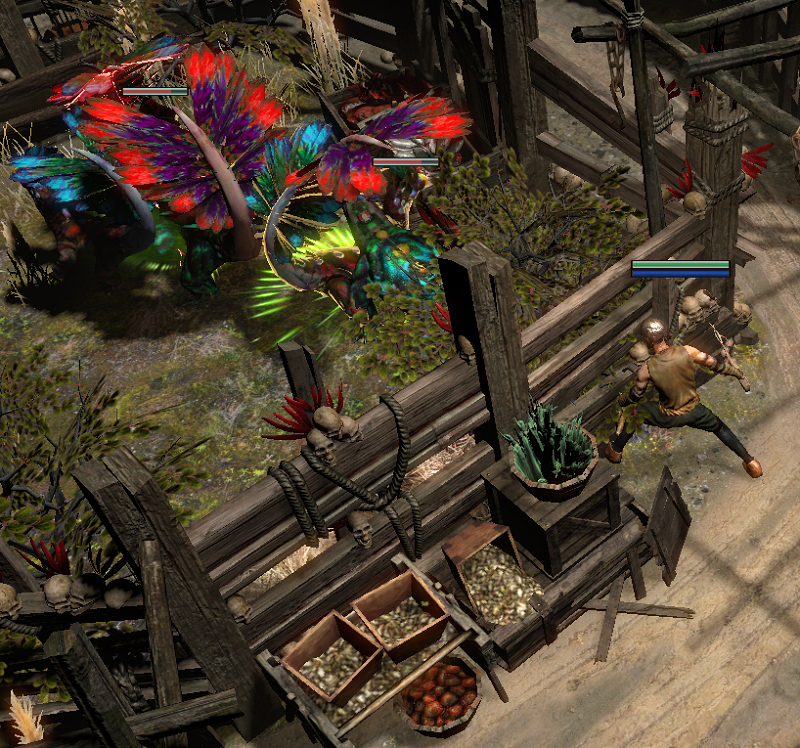 Reptile’s enclosure of Chimerals is rather colorful with their ringleader being a level 33 Paradisae Venenum. These required a few different food sources to be kept happy it appears. Thankfully I am not responsible for that end of things. 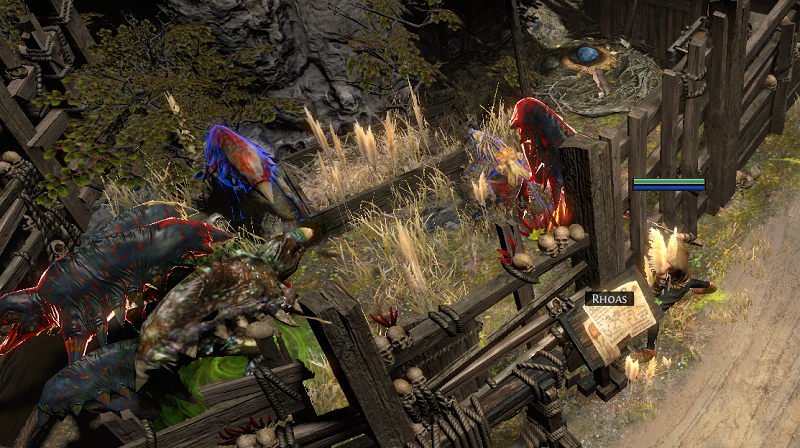 Finally over on the left are some Rhoas they are another type of Avian we keep here at the Menagerie. It seems they need a bigger area and one of them is nothing but bones! I’ll have to talk to my manager about that one.

While the Menagerie Wilds and Caverns are great as well it’s time for the main event. 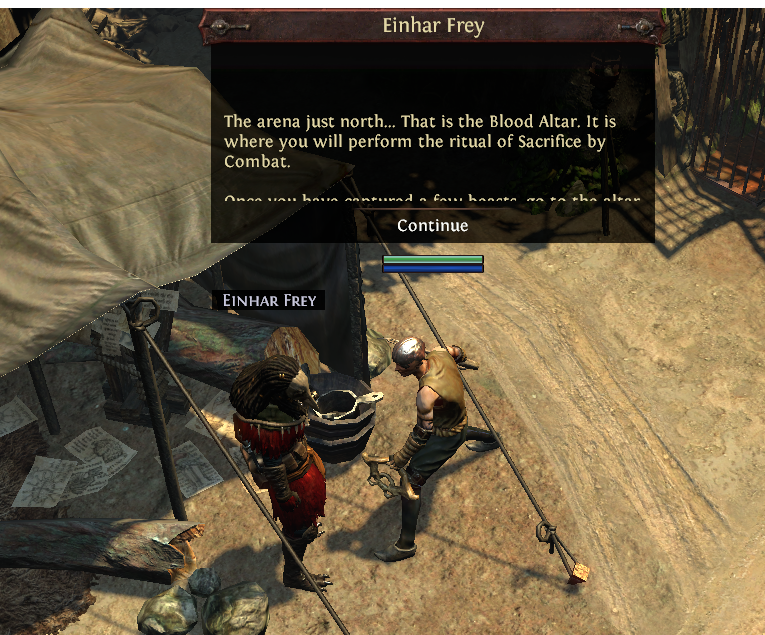 So far during this league play, though I’ve done my fair share of capturing beats. I have not taken advantage of trying to earn the rewards from them. With it being hardcore and I'm used to early portions of league specific mechanics being a death trap I held off on doing it.

I did make this lower level toon to just test things out myself. See what could cause me issues and how hard could things be. I did a couple of fights back to back and took a look at a few different reward types as well. 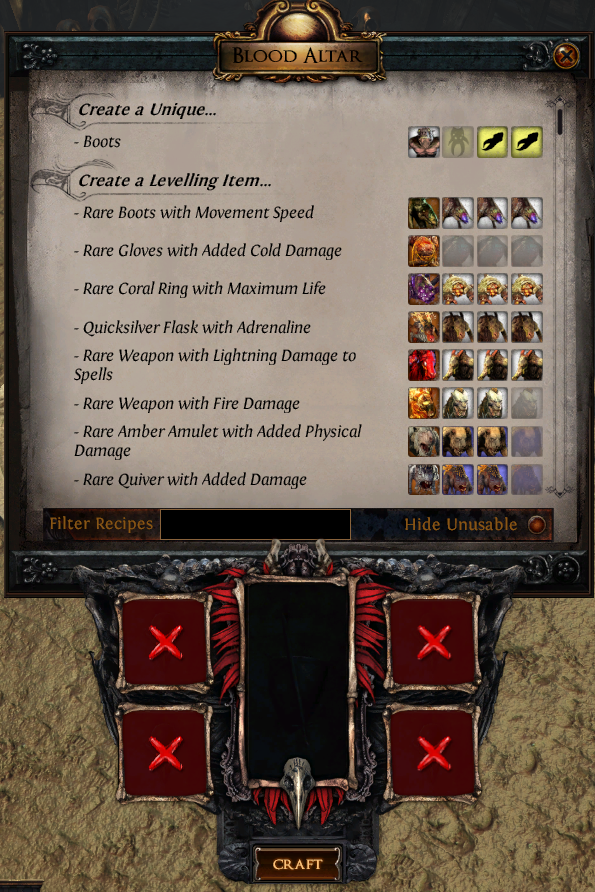 The leveling item section interests me so I tried out rare boots with movement speed and Quicksilver with adrenaline and some other items. 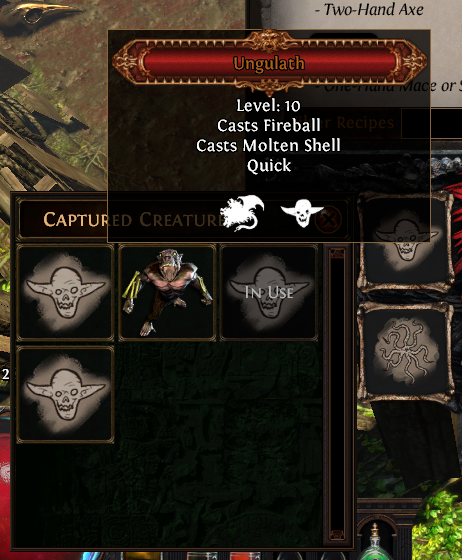 I also noticed it summoned things more on par with the item level even if it used higher level creatures in some of the slots. I was expected to get flattened in one of the fights since it was using a level 30 something in one of the slots. The top left slot is the one that controls the item level and what I assume the difficulty of the fights. I used a level 10 in this instance instead of higher. The fight was not overly difficult. 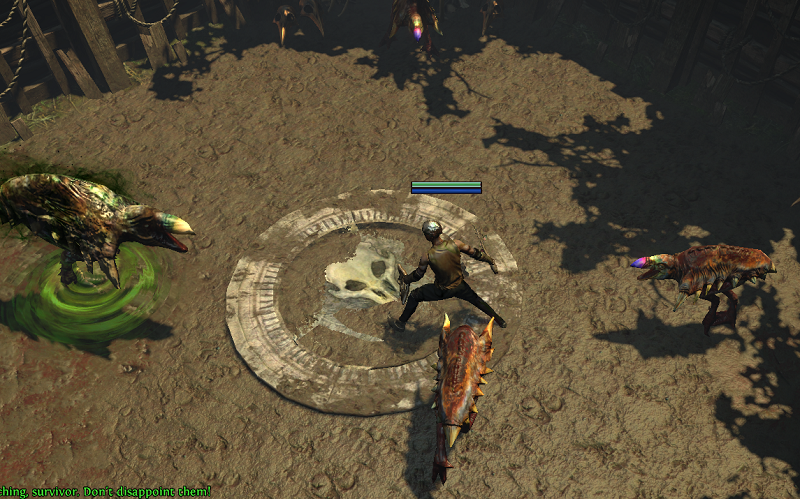 Since some of these fights were a bit lower level they were pushing overs. This one, in particular, was easy and the reward was decent for a leveling item that ended up being a bit lower than stated item level of what it said before the fight. 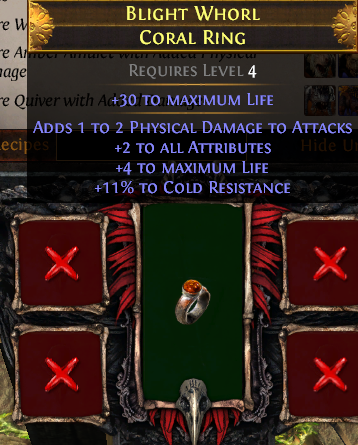 I got this level 4 ring from an item level 6 fight. I was expecting the item level of the fight to be what you earned. This is just something to keep in mind it does make since after thinking about how their item level system works. 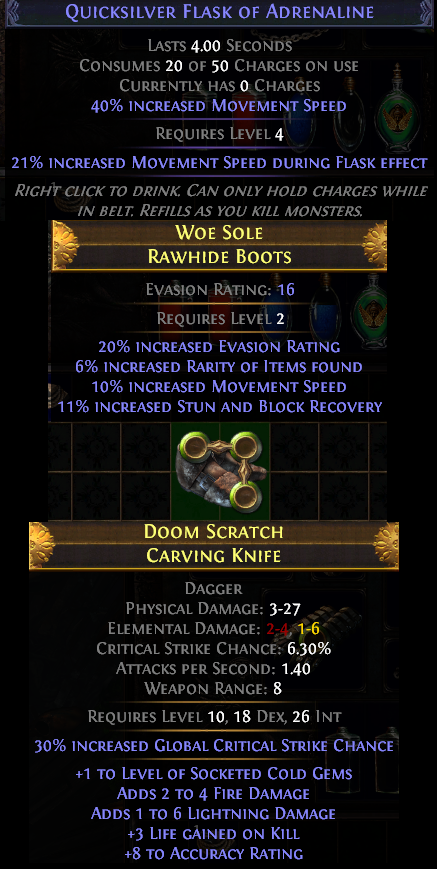 These were also some items I picked up from different fights. Most of you can see where rather low fights or they simply produced low items. I really like the fact you can target a specific equipment slot this way and try and gamble as it were. This was something that felt missing from the game. 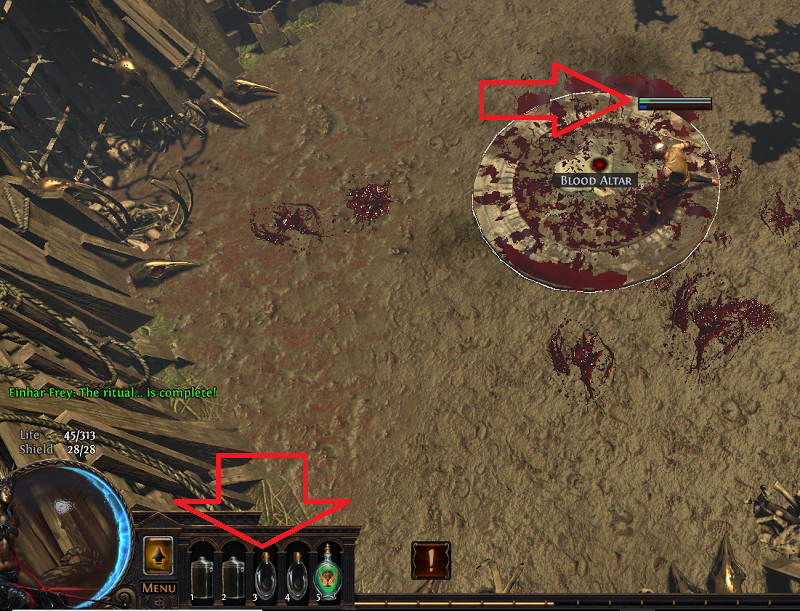 By the end of the few fights I did. I noticed some issues. I was not getting flask recharges, and you also could not use a portal to get out.

Thankfully this toon had a 28 shield where I could get in close enough to land a hit or two then back off to regen it and finish off the fight.

I also tested afterword if you logged out would it keep you in till you were killed? The answer is you could log out and live if done fast enough. The match is however lost along with the beast used. It also bugged out the instance and I could not start another match with all the options being grayed out. The game also would not let me create a new instance of The Menagerie. However, going in a couple of other zones then back seem to either fix this or enough time passed and arena “reset.”

I also noticed the gates to where the beast is kept stay open and you can go into their little cubby areas. Which could be an advantage for some builds. If you were in a prolonged fight sometimes the beats would also just wander back into their cubby. 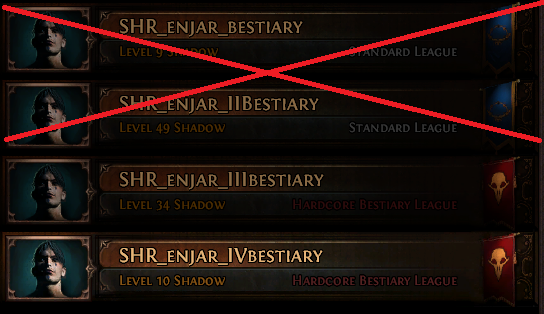 With some server issues, I went a safer route and made a new toon for some needed testing. I gained a couple of levels and am in Act 4 where I might need to spend day 5 grinding to get past the encounter in there. 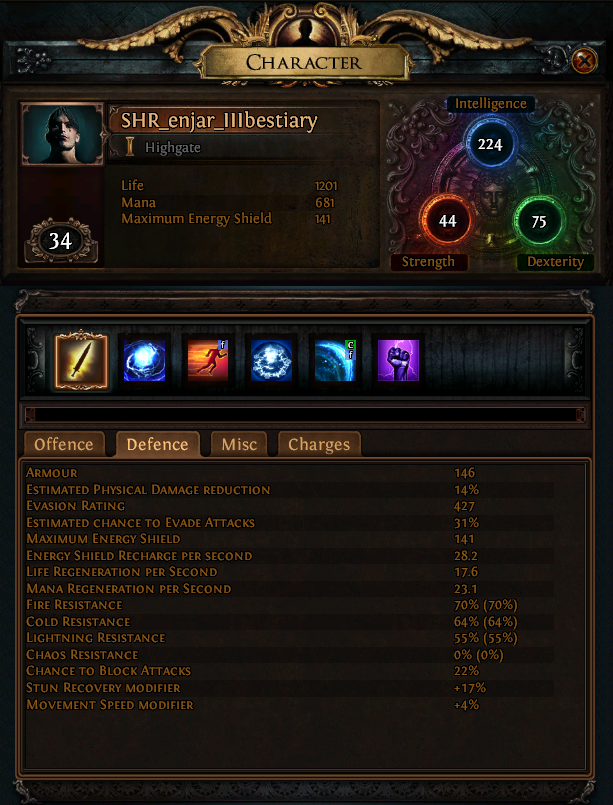 I sacrificed a little bit of Fire resistance to pick up more Cold and Lighting. Lighting is still trailing behind the other two resistance and is something I will be keeping an eye out for during day 5 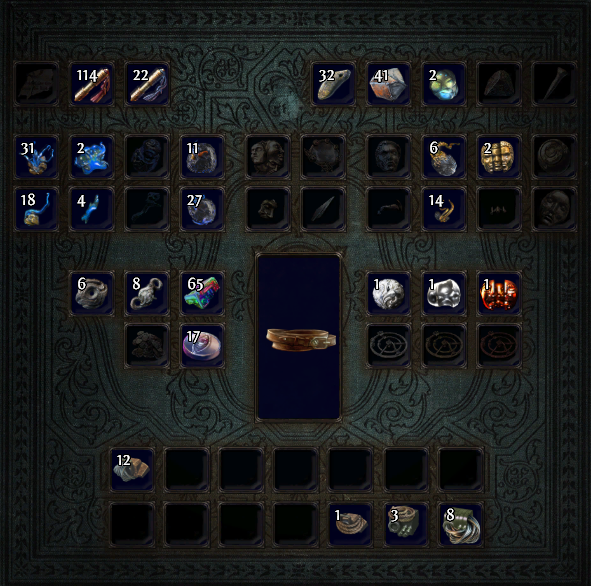 I picked up 3 Orb of Alchemy but other than that not whole lot of change here either.

Screenshots taken and content written by @enjar. Recap of my day 3 for Poecomp.