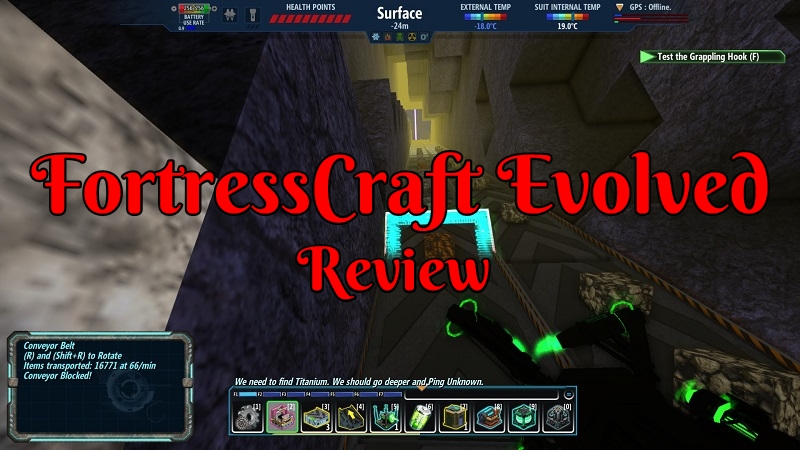 I’ve been playing this game off and on again since 2014 and instead of it evolving into its own unique thing it just feels like it wants to be everything in this space. Frankly, it got lost in a very competitive voxel and crafting market that is not booming like it used to be. It’s got so many DLCs and just stuff going on it just makes you wonder what the heck happened.

While it got somewhat of a Minecraft feeling. It also got that just way too over complex mod you downloaded once for Minecraft and gave up on as it was asking a little to much just to craft something. That feeling like your running around like a headless chicken trying to find what assembly line you put together that creates whatever competent you needed at that time. 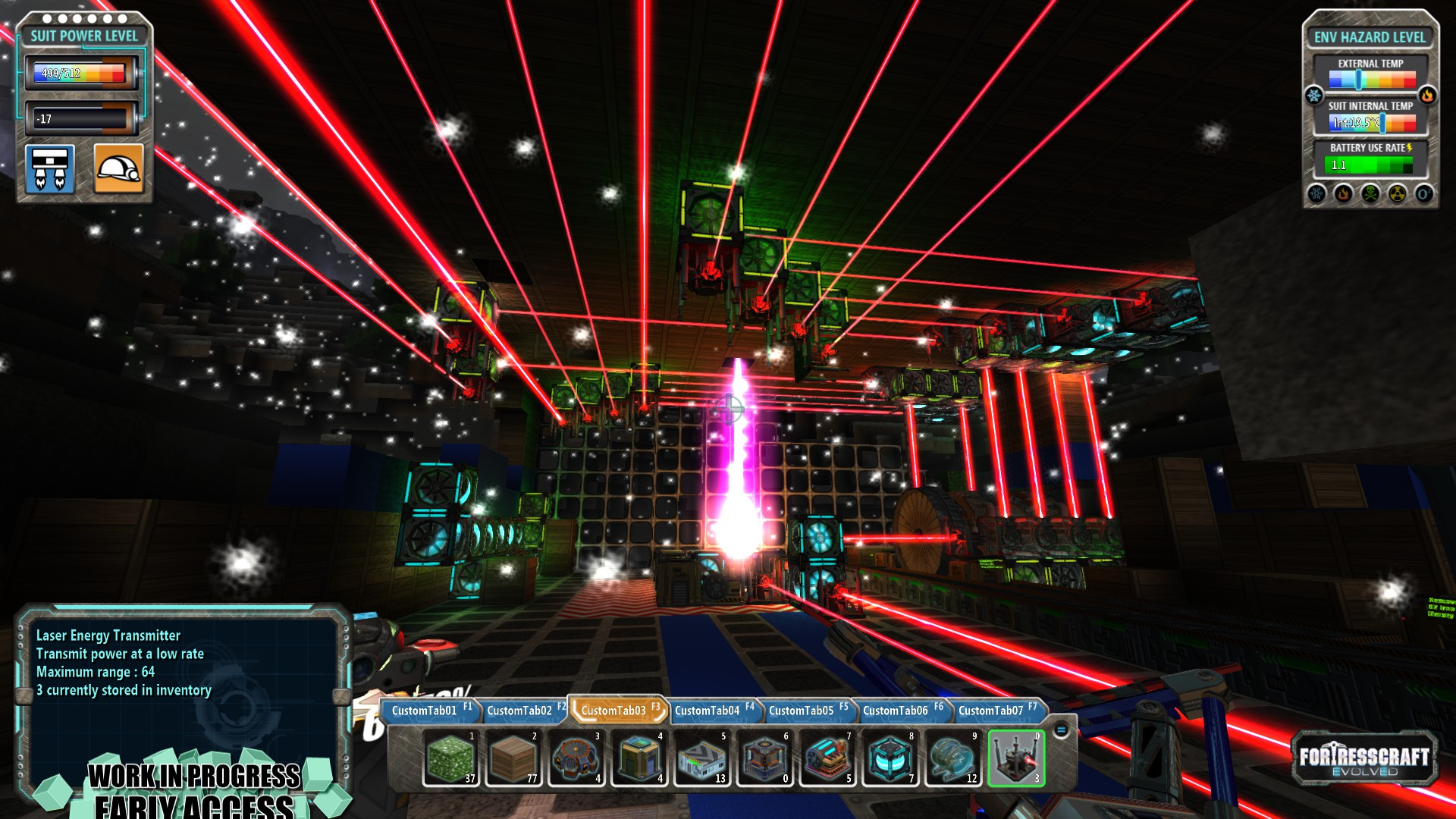 This games main feature used to be just gathering a metric ton of resources to keep crafting and getting deeper and deeper. I’ve played this one before with a friend and we had an amazing time back then. It was not cover complex and you could just have a fun time trying to keep up with your ever-increasing demand for power and transporting it deeper and deeper. Along with bringing all those resources up to the surface so you could craft your next upgrades and go deeper.

I took the above screenshot back in December of 2014. Thankfully I had saved it online and you can just get a sense of this massive power grid we had going. The game itself lets you transfer energy via a laser. These devices at the lower levels don’t travel very far and carry only a small about of energy. As you progress in the game by finding and collecting new resources you were able to craft better systems. These also had an upgrade slot in them where we collected lens from deep down in a cave. When you are going down over 1k blocks you do not want be laying out a power system 32 units at a time. I can’t quite recall how far these went but they were quite powerful before you set up another one to act as a power replay to keep it going. 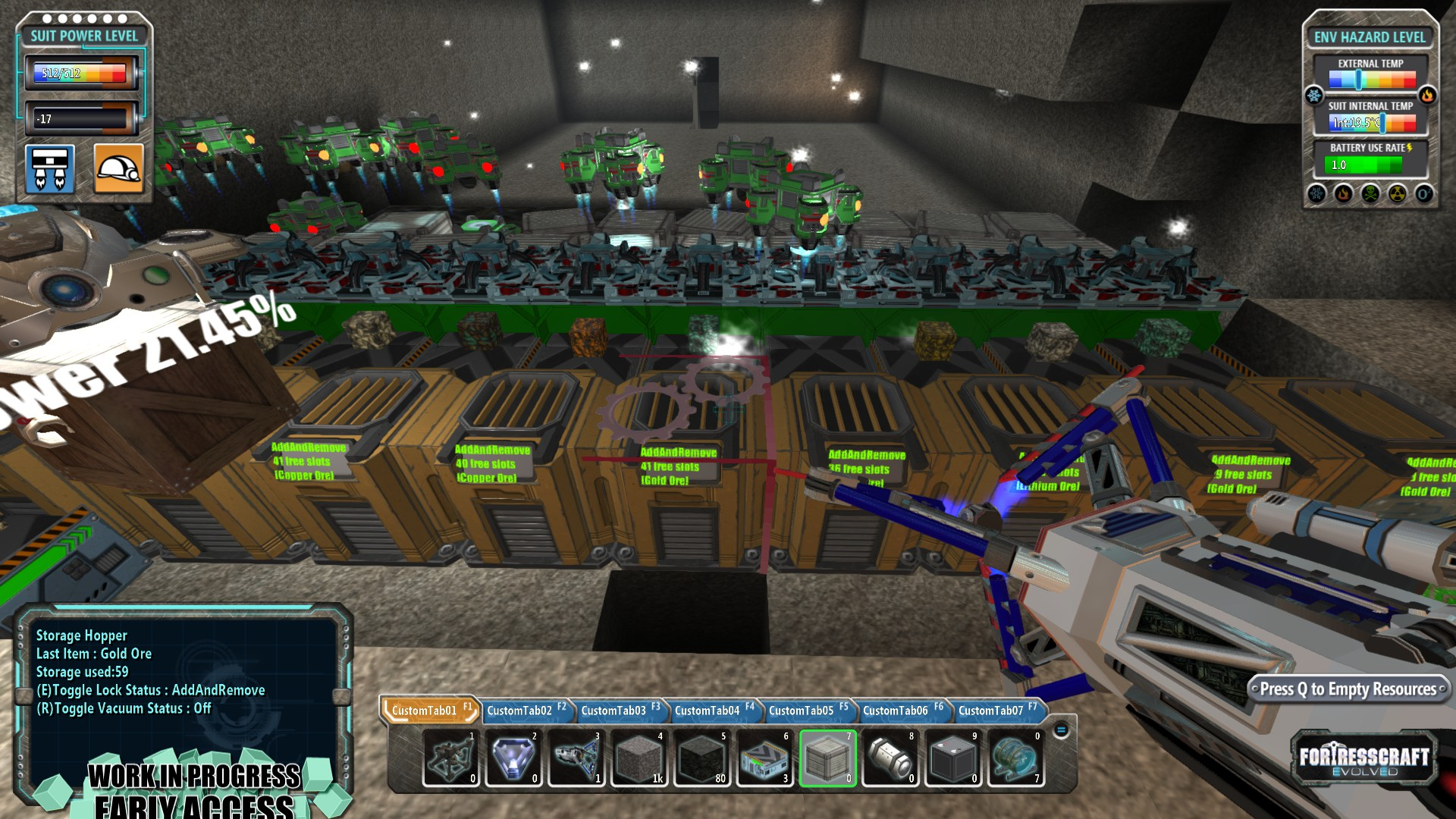 We also had this massive sorting facility that had all kinds of crazy metals coming up from the planet. We had a conveyer belt system at first that would take things getting drilled and bring them back to the surface. As you get deeper and deeper those become less efficient they can also get attacked. So a lot of our resource was going towards tubs that could carry more, move them faster and function in deeper cold parts.

You also wore a suit where you could upgrade the power systems and the ability of it to regulate internal temperatures. You could not make it that far down before you would freeze to death and some of the resources you need down there also were needed in those upgrades. As such there always felt like that chase of just resources to keep going down deeper.

I think we spent 70 hours or so on this single world. It was just the pure fun of setting up more conveyor belts and watching the resources roll in. 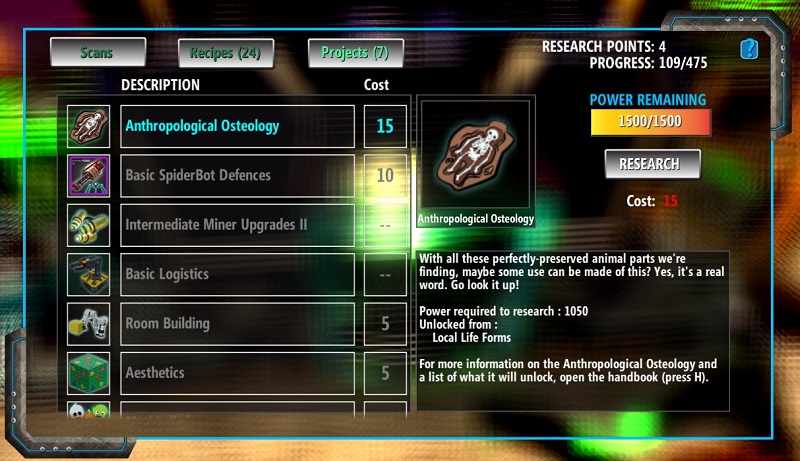 Over time there started to be more of a focus on carrying out research to unlock new items like better energy systems, different kinds of automation blocks, weapons and so forth. The lower tier stuff you would acquire by scanning an unknown block and having it analyzed. Later in the game you could to build research pods.

For a while, it was a struggle to have enough research points to get everything you wanted. Even more so in multiplayer where one member wanted to unlock higher tier power grid items while another wanted some blocks to build an actual base out of. More times than not these just lead to an adventure deep down scamming for unknowns.

Later you needed to build a laboratory and its main cost other than massive amounts of power was experimental pods that were constructed from different materials depending on the tier of the item you wanted to unlock. Some of them where like copper, tin, iron, lithium and so forth. The game has a hefty amount of ores. 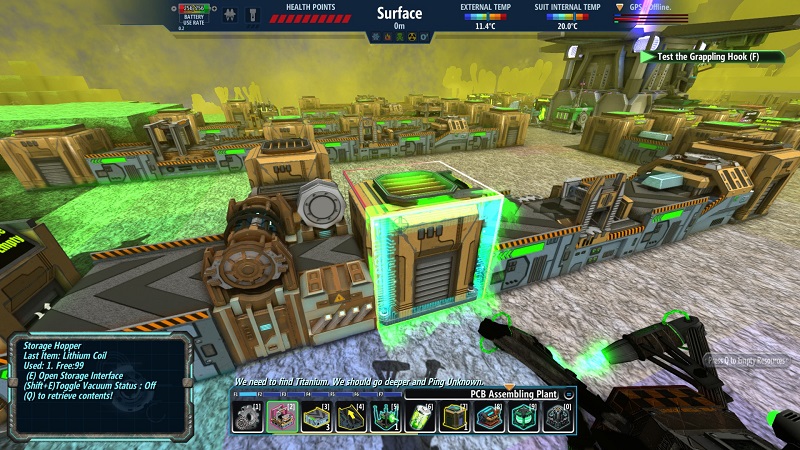 Now a day you end up building a lot of different assembly lines. While some of the more basic items you can craft in your inventory it’s normally less effective if a machine can create that item. You end up making long strings of machines that convert a metal bar into a more refined material. You can even have a conveyer belt that hauls up say copper feed right into it for a very long last supply of that item.

This is kind of where things start to get rather confusing in this game. I can take the above examples metals of copper, tin, iron, lithium and so forth and refine them down. I can send the bars into an extruder plant that turns them into wires. then into another machine like the coiler plant to turn wires into coils. Where I then can make them charged coils depending on the tier of the item. You can also send these resources through a process to be made into PCBs and so forth for many of them. 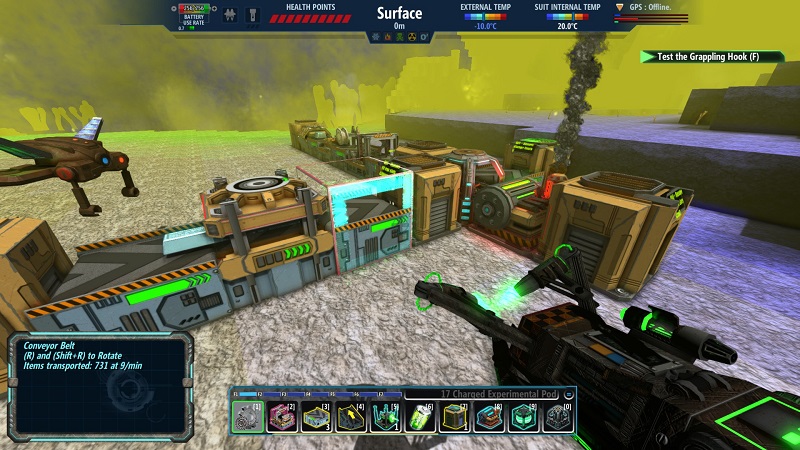 Then you step up into creating assembly lines that require multiple inputs of resources to produce the item. Some chains of it could be longer or require more resource then otherwise. They usually need to be power at this point.

After a while you just have quite a few assembly lines all over you just hoped you had some organization to the madness. Otherwise, you might end up putting copper bars into the iron gears production line that has no issues till it gets to the last machine and can’t do anything with copper!

This game has around 14 or so different kind of resources you end up mining. Everything from coal to uranium. While not all of them would even be useful if you make to make a wire, a plate, PCB and so forth. My inventory is an utter mess just form slapping 100 bars at a time into something as I always at some point need something to keep crafting. So I 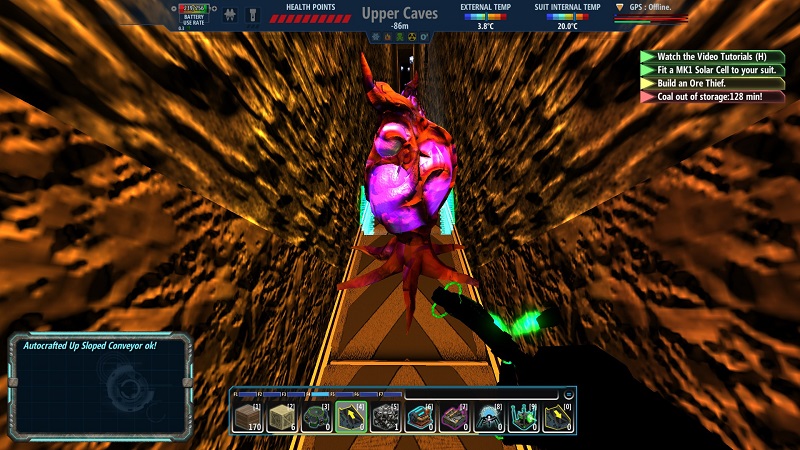 I think this game would be better without the combat element. It’s not deep enough for anyone to really care. If just feels like more of an annoyance. There really no need of it being a “survival” mechanic either.

Your base can get attacked and even destroyed depending on what setting you have the game on. I myself have my main area get attacked my auto turret shoot things down and then the power generation gets taken out.

Once you get deep enough your conveyer belt can become infected with creatures and other things. So you end up needing to run automated turrets every so often and power to run them. While you can craft your own gun as well this is not a go down every 5 hours and clear up your transportation system. They can appear sometimes just a couple minutes after clearing them.

Beyond turrets, you can build a giant spider that protects your base and really the only thing that feels unique or special as far as combat goes. I have done that in the past but it takes a metric ton of supplies and even more importantly power. While it surely will keep your base safe is requires a lot of space and resources for that protect.

Otherwise there just nothing that amazing and one of many things you wonder if they even needed to be in-game in the first place. Even if it does try to fit into the lore of you crash landing on a hostile planet. That has been played to death in so many games. Even back when I played it for the first time it was already getting to be a boring thing that every game does. 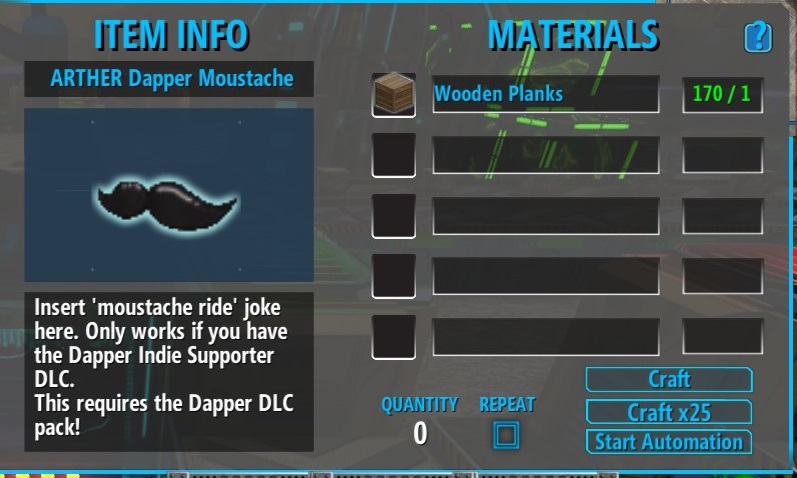 You can buy the Dapper cosmetic pack that lets you be more Dapper for you and your Arther. Arther is an annoying robot that flies around you and sometimes bugged out and repeats the same sound over and over and over. Along with a skin pack that just changes colors of you and things in the game. These things feel more like ways for people to support the developer than any real value.

There some other stuff as well but it should just be included in the game unlocked. For instance, the adventure DLC includes aggressive monsters. You will also find items and they will even say on them that you need Dapper or whatever DLC to use even craft it. I guess that is one way to try and get people to buy them but I just don’t see them very inspiring to buy. 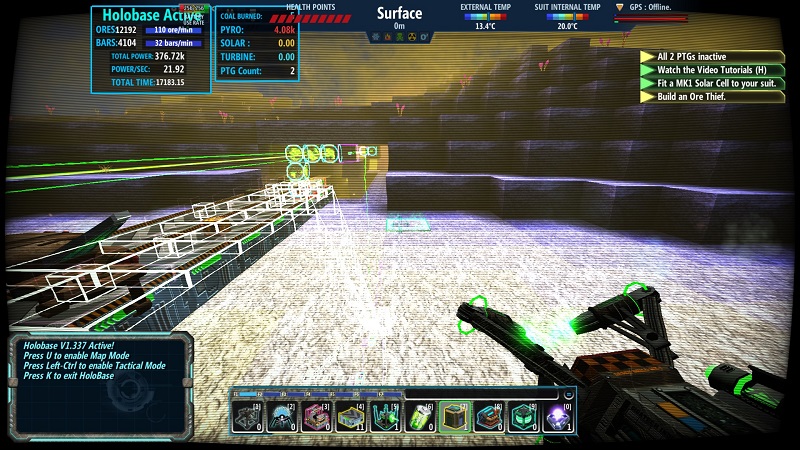 The game was better years ago when it was simpler and not a full release at the time. There was less to do and you enjoyed it even more. You just got to play the game and not have to have to build a machine so you can build another machine that you guessed it builds another. There were also not all these DLCs that should just be in the main game in the first place. By today’s standards this one did not age well at all. 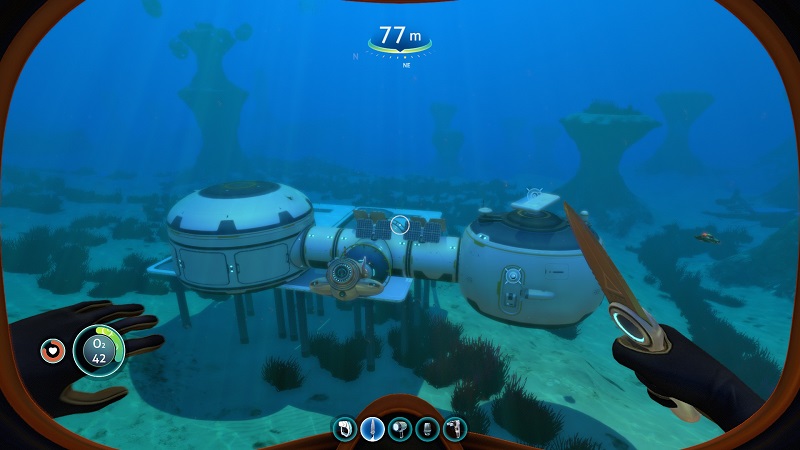 If you’re looking for some gathering and crafting that is not as complex that still has you going deeper and deeper looking for that next resource. Perhaps it’s time to crash land on another planet and dive deep into its oceans.