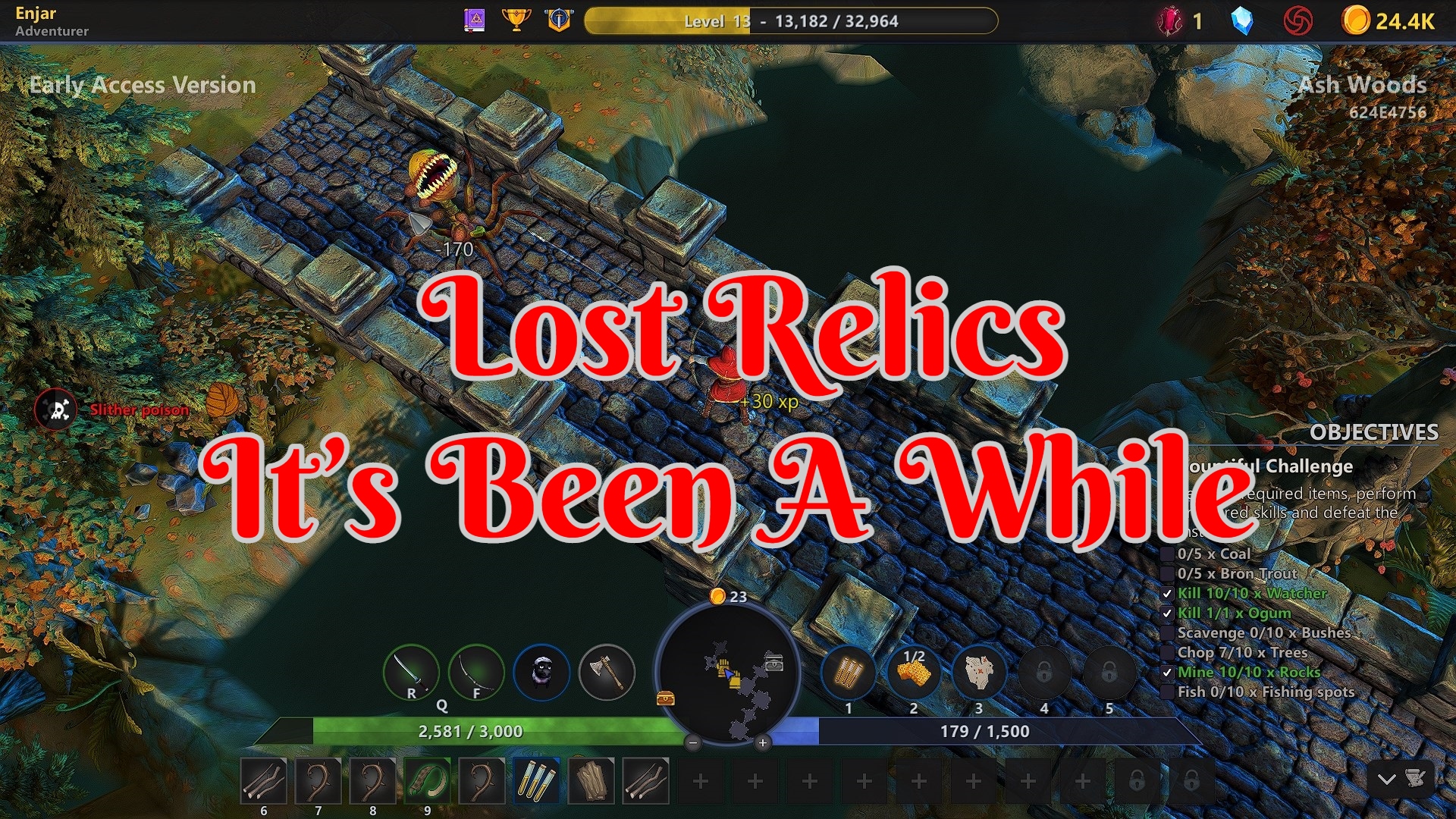 It has been a while since I have checked in on Lost Relics an ARPG on ETH Enjin blockchain. So long since I last wrote on it when it was called Forgotten Artifacts. I’m happy to say a lot of changes for the better have been made. I’m quite excited about how this game progressed forward. 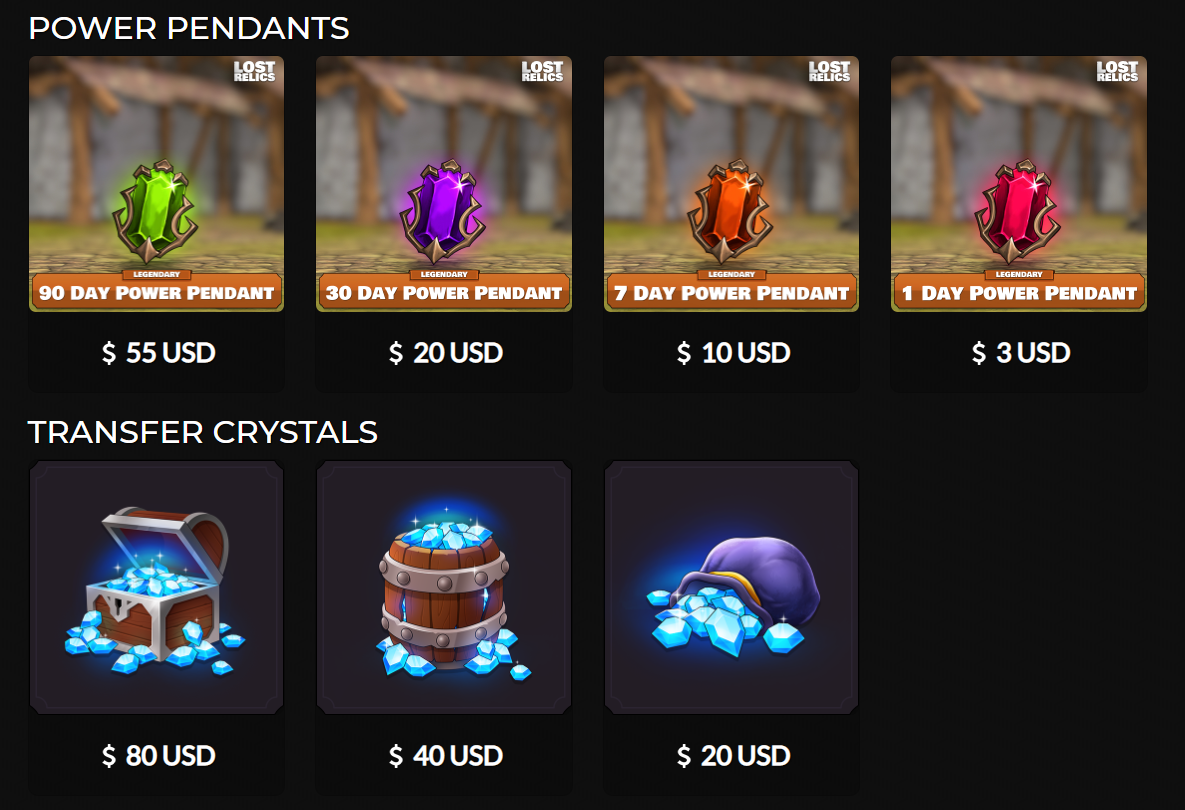 One of the bigger changes occurred with how this game made money. In the past, you had to buy adventure stones to run dungeons. If you escaped alive out of the dungeon with any blockchain items they were sent into a queue on Enjin and you eventually got them into your blockchain wallet.

They have done away with both the adventure stones and any blockchain items you getting automatically getting sent to your wallet. While they are using Enjin a sidechain of ETH. ETH gas fees still have to be paid and as anyone knows that has become quite an expensive thing to deal with.

Instead, now they have moved into a subscription model. Players can buy from a single day up to 90 days a Power pendant for member benefits. These power Pendants allow you to carry more than one blockchain item out of an adventure dungeon at a time.

The cool thing is these Power Pendants can also be sold by other players in the virtual item market called Royal Emporium. Along with a wide range of non-blockchain game items. I’m sure you recall all those common drops that no one picked up? Some of them now have used and even sell for small amounts of gold.

There are many benefits players get from being a member. From a slight increase to experience gained, higher Royal Emporium slots (the in-game market for virtual non-blockchain items) amount to list more items. The biggest being access to all adventures and not being limited to just taking one blockchain item out if you escape alive.

I did a bit of adventure grinding and selling of virtual items in the Royal Emporium till I had enough gold to buy a Power Pendant from another player. It is great to see players having the opportunity to become a member this way if someone is selling one.

So what about transferring your blockchain item to your wallet then? That has also changed. Blockchain items sit in your in-game inventory or bank and you do not drop them on death. They can also be used in any kind of turn in missions like a bounty. If you want to transfer the item to your Enjin wallet you need to buy Transfer Crystals from the website or other players on the Royal Emporium market.

Overall all these changes seem to be a reaction to dealing with the higher costs of gas. I’m glad to see the game developer find a workaround that allowed players to still enjoy the game while they are waiting on further advancements from Enjin to reduce costs. This to me is a good indication this game has a lot of staying power than many other blockchain games on Enjin or ETH are struggling greatly with. I’m also rather thrilled with how they changed the dungeon system for adventures. While adventures are still randomly generated within a certain tileset you no longer have multiple floors. You are also no longer running to a bunch of different locations around town. There is now a single map to select your adventure from. This has allowed Lost Relics to have more adventures in verifying difficulties.

Before they only had a couple of dungeons with not much information about them other than what limitations they placed on the rarity of items you could take in with you. While they still have that there is now further information including what items you could farm from mining, fishing, woodcutting, and gathering.

Before they only had one free dungeon to run that was called Practice Dungeon. You didn’t get to keep any blockchain item drops in it and most people only ran it hoping to find free adventure stones to run other dungeons. With adventure stones no longer being required the practice dungeon has been reused elsewhere from what I can tell.

Instead, non-member players can play in one of four adventures. They are permitted to carry out one blockchain item if they escape alive as a free play player. These four dungeons give quite a lot of gameplay. I still have not acquired the necessary items to venture far from the free adventures.

For members, they get to play in the free ones along with another four additional adventures marked with a crown symbol. Unlike the free members, they are not capped at taking one blockchain item out regardless of the adventure they are running.

There are also many adventures still in development. This game throughout the last time I check it has been quite active in development. I can’t wait till I farm some better items to survive the more difficult adventures and see new ones open up over time. 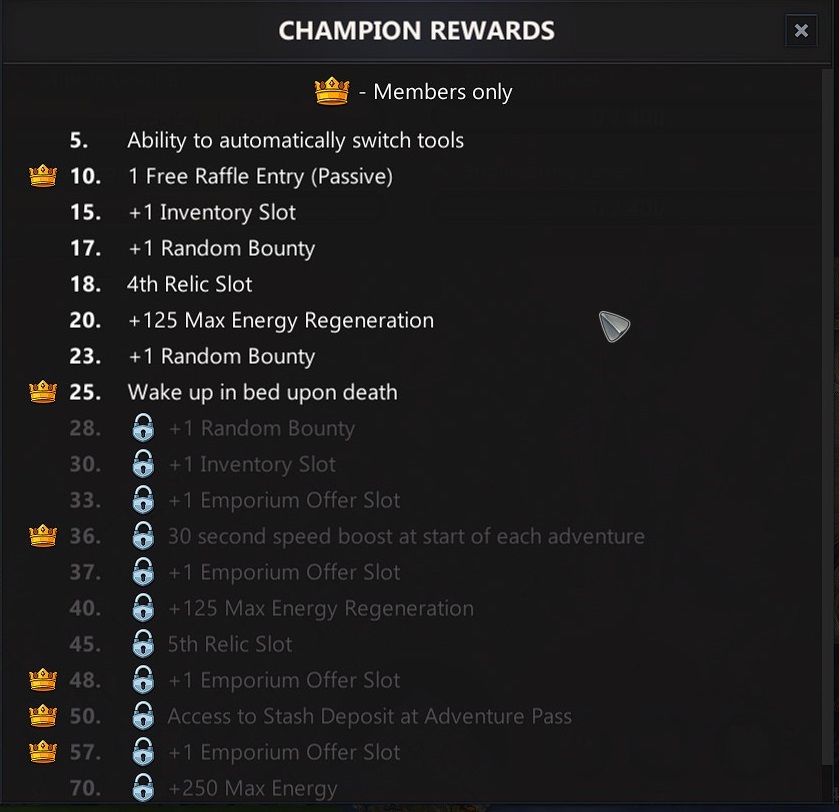 Lost Relics has also added a leveling, gathering, and crafting system into the game based on experience gained. From slaying monsters to mining ores or scavenging herbs you gain experience in the various actives you partake in.

One thing this game felt like it was missing beforehand was some kind of champion progression outside of acquiring higher rarity relics. The leveling system fills that gap quite nicely. There are benefits for all players and some only for members for leveling up. Where you can unlock more slots or even increase your energy as rewards.

For members only, you also get to open a reward every time your main level increases. In these rewards, you can find pets, keys, and loot chests. I have found the pet to be quite helpful. Meanwhile, I have not found much value out of the chests as of yet. 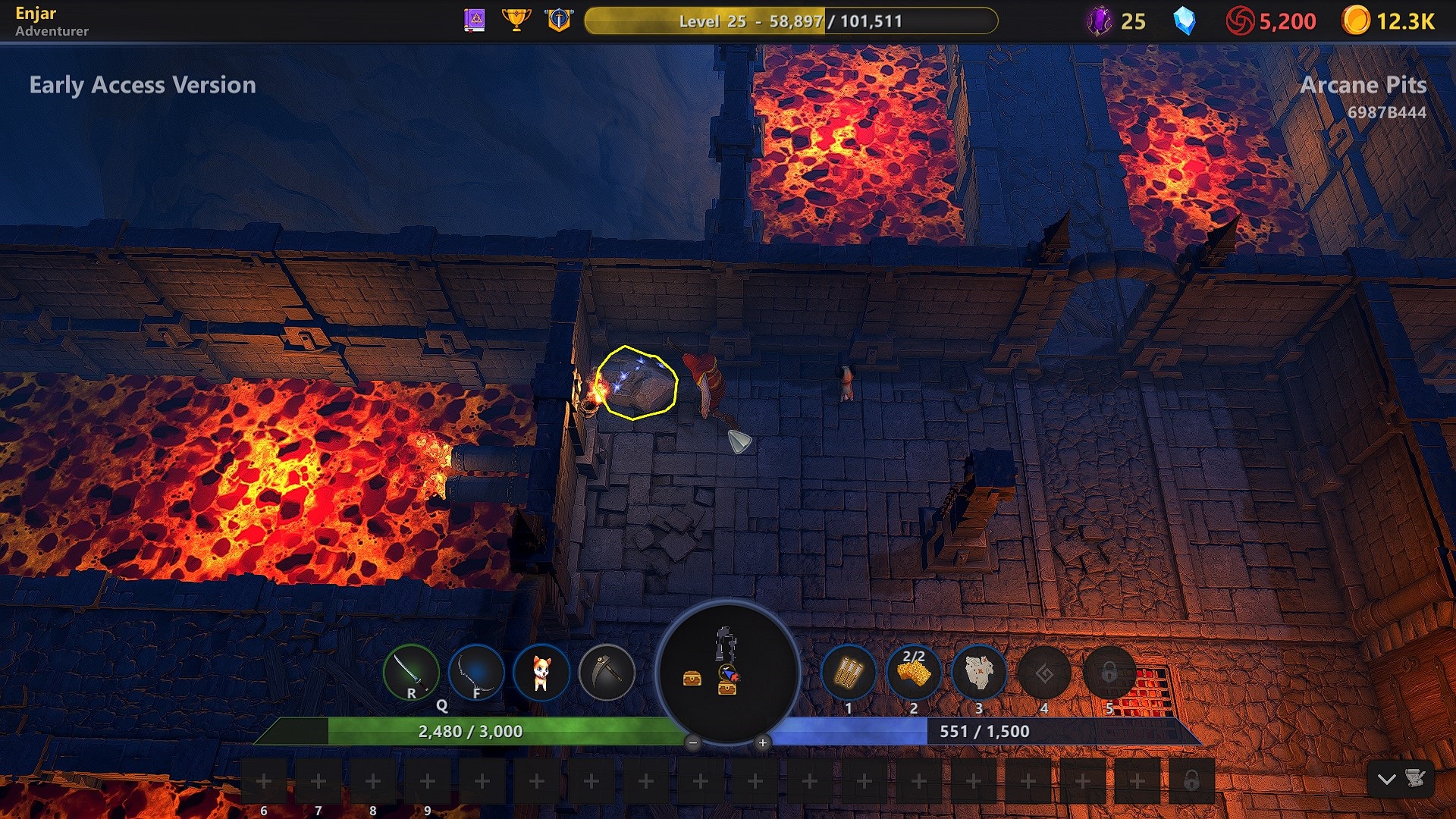 While out on adventures you can level up your different gathering professions from woodcutting, fishing, mining, and scavenging. Not everything you can gather yet seems to have a purpose. Some of the items are virtual and are only traded in the internal market. While others are blockchain-based items and are only traded outside of the game to other players. There is also some crafting in the game as well. From engineering in making the different rarity of tools needed for gathering professions along with other items like jewelry. You also have alchemy for making different potions from health to removing different elements like poison.

With this being an early access game these systems are quite early in development. Further items are expected to have some kind of use later on. Along with a lot more depth to crafting giving players further reasons to invest the time and resources into leveling them up. 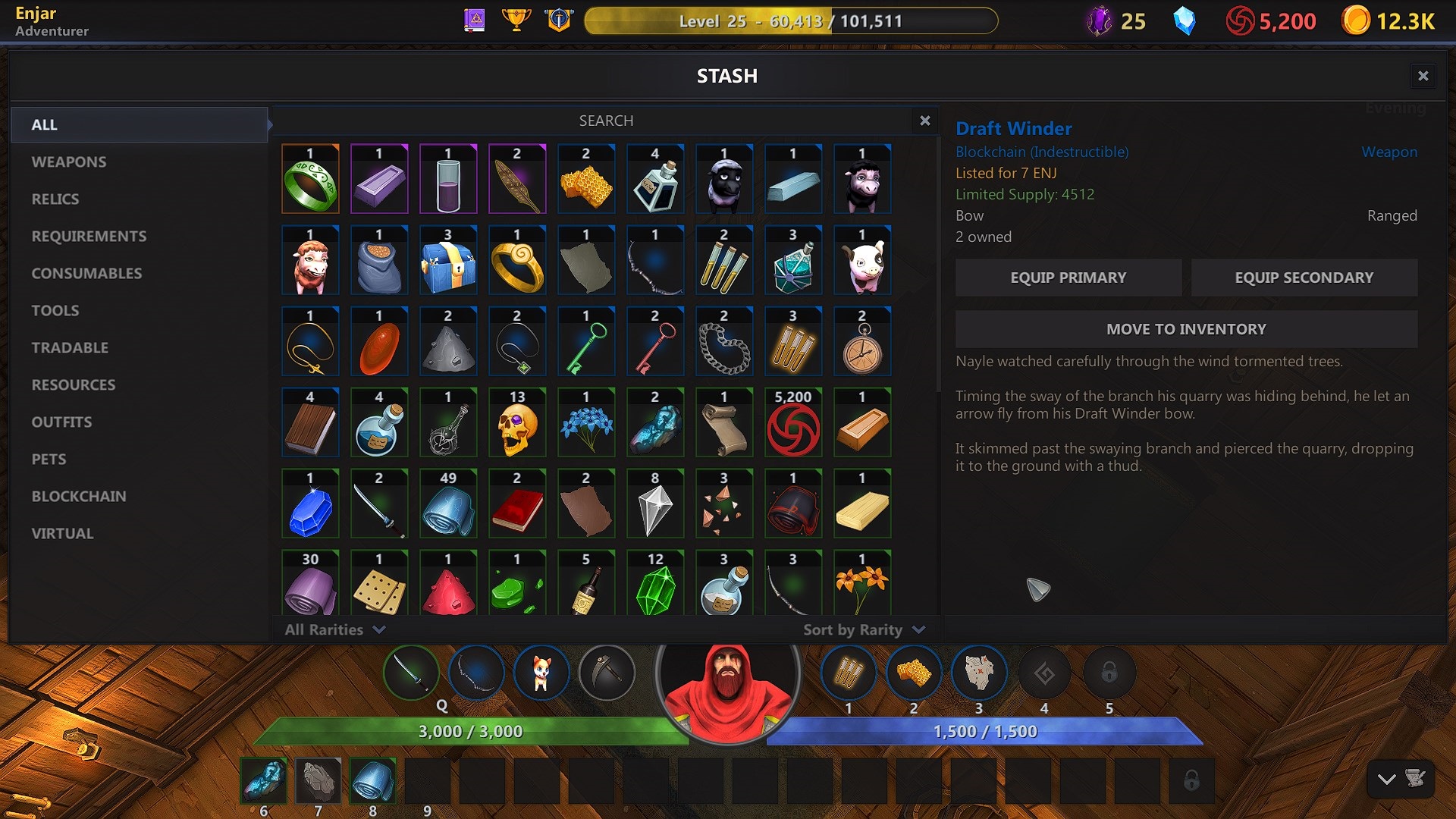 I do wish I had kept a closer eye on this game. I only had uncommon weapons when I returned. Since then I was able to find some rare items including a bow to help further progress in Lost Relics. Many blockchain items have already been found by the player base and Lost Relics seems to add in some new ones on occasion. Some of the best items in-game appear to have all been found. Many other blockchain items are still waiting to drop to a lucky player or will be added at a later date.

This blockchain game is getting added to the list of ones I’m currently playing. I can’t seem to put this one down long enough to want to write any content on it! As such, I plan to write a few guides regarding Lost Relics. Hopefully, the Enjin blockchain is not far away from resolving some pains gamers are experiencing when transacting outside of games dealing with gas fees.

Screenshots were taken and content was written by @Enjar. Screenshots are from Lost Relics.